For those who obsess about exactly how their 356 left the factory!
Post Reply
41 posts
Message
Author

I created the Nuts and Bolts spreadsheet above when I disassembled my June '64 Reutter Cabriolet. I was very useful to get the original hardware back on the right part and to answer questions for people who have a big bucket of bolts and nuts. I wish I had a similar list for a 912 as I bought a basket case 912 coupe a few years ago and am trying to piece it back together now, including a sunroof.
Greg Bryan
Top 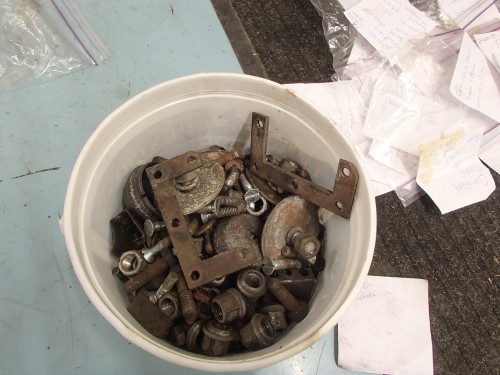 okay.. I wish I had that list or simmilar..
This was my first - only full restoration ever done..
so I cataloged all of them, then put in a bucket..
sad thing is that I had to go back to the platers twice more with with small, and smaller orders with additional parts as I took more things apart.
in the end it all worked out great.. 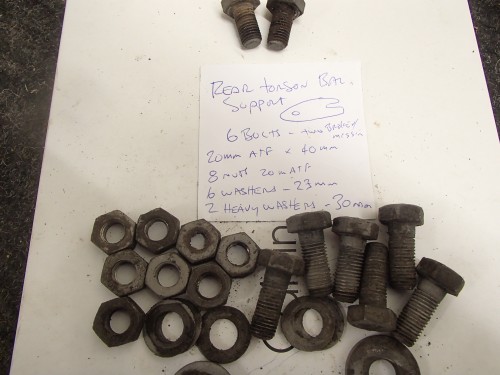 An earlier post questioned whether a C car might have the yellow zinc finish used on 900 series cars. The yellow zinc started appearing in mid 1966 production year as best as I can determine.
Jim Wayman
Top

It is a challenge when faced and a bucket of bolts. I am facing this with an MG project I have on the go.

If this response is a duplication, please forgive an old guy. As with most 356 documentation, especially hardware plating, very little is absolute. As mentioned above, the parts manuals do a pretty good job of documenting the subject. Also, there is a pretty good article in the 356 archives titled "Metric Hardware and Plating which you find interesting. Here is the section on plating:
Plating
Plating – Various types of plating was used to protect the hardware item and to prevent corrosion. The processes for various plating methods is a very complex matter, however for our purposes these have been, hopefully, reduced to more simple terms.
The final, and most misunderstood, consideration is the types of plating used on each hardware item is usually shown in the parts manuals and may include the following notations on each line item.
(The following information was derived from a search on the 356 Talk discussions and other resources on the Internet and 50 years of research.
Zinc Plating
Verz. verzinkt, or verzenken in German, was one of the most common and inexpensive methods to protect steel, commonly described as ‘zinc’, or ‘St-verz’ in the parts manual. This process was a single stage and was not finished with a chromate wash, or conversion. This offered the least amount of corrosion protection and is often called ‘black oxide’. There was a second type of zinc plating, referred to as ‘gal Zn 9’ in the parts manual, or “black zinc” which was the standard zinc plating followed by a chromate conversion step which added additional plating and protection to the item.
Gal Zn 12 was a zinc plating process which produced a silver finish.
It is my opinion that, as a general rule, most 356 bolts and nuts were plated using a combination of black oxide or black zinc from Pre A up to the introduction of the T6 B model at which time silver zinc was used through the early 911 model, about 1965, when yellow zinc chromate was phased in. This was a plating method similar to black zinc but a yellow chromate conversion was applied following the initial step.
Phosphate
‘Phr E’ and ‘bost’ refer to Phosphate and Bostik-Endurion, an anti corrosive finish baked over phosphate – Bostik Company was the manufacturer of the Endurion process. This type plating is identified as ‘phr E’ and was commonly used for all types of washers and some hex nuts. This process also produces a black finish, similar to black zinc. I cannot explain why the two types of plating, zinc and phosphate, were used, perhaps it was the manufacturer’s decision.
Cad or cadmium
Offered a better anti-seize and lubricating properties for nuts, bolts, screws, fuel lines and carburetor linkages, primarily used on engines. Cadmium is an electroplating process where cadmium is applied and then a supplementary coating is applied to produce a grayish silver color, commonly referred to as cad type 1, or Cad type 2 which has a yellow or gold finish.
Type I, ‘or referred to as clear cad’, results in a slightly dull silver appearance and was used primarily for engine hardware for 356s from 1950 to 1961. The parts which were cad plated are usually identified in the description in the parts manual. The use of ‘clear cad’ on engine components varied by year and type of hardware and what each of these was is a topic for later discussion. Cadmium is a lethal chemical and its use was discontinued after the 356 T2 models were completed.
Type II yellow zinc chromate - results in a gold color was referred to as ‘Gelb Chromatiert’ in the 911 parts manuals.
Chrome
Verchr is used for many special parts such as head light rims, top latches, outside door handles, switch bezels, inside door handles, seat hinges and many screws for trim items.
Nickel
Only a very limited number of parts were bright nickel plated. These were: Hazet wrenches, early seat rails and screws for Pre A, A and B T5 models, tool bag and tonneau cover buckles, keys, tire gauges and hood and engine release cable clamps
Anodize
Only a limited number of parts were anodized, another plating process. For the A model, the hood handle and some bumper guards, and the bumper and rocker trim for B and C models were anodized, This process is similar to chrome plating but produces less shine to the finish.

What Is The Bottom Line To The Type Plating To be Used In a Restoration?
It is possible to plate hardware using black oxide or black zinc, however black oxide is not very durable and is prone to rust and corrosion unless the hardware is treated regularly, and often, with penetrating oil. Black zinc is much more durable and long lasting and is very similar in appearance. Attempting to re-plate the hardware using phosphate is also difficult. So, depending on your level of fanaticism, it might be acceptable to plate all parts identified as: zinc, gal zn9, bost., and phr E in the Pre A and A parts manuals using black zinc and achieve a reasonably durable, maintenance free and acceptable appearance.
What do you think?
Dr. Nuts
Top

What I found useful when restoring cars was to take each of the parts book illustrations, blow them up to 11" X 17" and for each piece of hardware on the illustration, write in on the enlarged sheet the specifics of that piece of hardware. For example, the DIN designation, the dimensions, the head markings (varied), the quantity, and the finish. That way, the guys that would do the assembly only needed to refer to the sheet to determine what fasteners to use in the assembly. All of the sheets for a model of car would be put in a binder labeled for that model.
Jim Wayman
Top

Thanks Mike and Jim. The only variation i am doing to the above is gal zn 9 and gal zn 12 I am pkaying as zinc (ie silver) as I understand this is zinc plating with a thickness of 9 or 12.

I have taken the diagrams as Jim suggested and built this website and put all the source on GitHub for the programmers out there.

Tom - thanks for that very informative post. Regarding cadmium, I plate everything ’silver’ in zinc as I’ve been exposed to enough toxic chemicals over my lifetime. It looks pretty much the same in my opinion and I get a bit of peace of mind.
Greg Bryan
Top

For years I have been meaning to get my hands on the old DIN books that deal with plating. When I did my ‘57 and early 911 I really went of the deep end with regard to plating. For those wanting to be close to correct but save themselves countless of hours and aggravation, take Tom’s advice, black zinc for pretty much all hardware underneath the car and that used in the doors etc and clear silver zinc for the remainder
'56 Coupe
'57 Coupe
'59 Cab
'60 Coupe
Top

There is some information in an article in the archives, search 'Metric Hardware and Plating'.
Tom Scott
Top
Post Reply
41 posts