For those who couldn't care less how their 356 left the factory!
Post Reply
146 posts
Message
Author

Hi Guys, had a great time over your side of the fence in New Jersey for the ECH and whilst there took the opportunity to have discussion with two gentlemen who had installed a 911 engine in their 356. An impressive installation that even featured air conditioning. I took many pics of this car and after budget and engineering considerations I have decided to go down a similar route. However, my main reason to start on this engine swap is that I really don't like that four cylinder engines. I have a redundant 300 horse 289 small block Ford motor sitting in my garage, left over from my Cobra (kit car) but I thought that would be a little too much of an outlaw, so I have settled on a more conservative 2.4T engine and 915 five speed box to find it's home in the rear of my BT6. I have a few parts to obtain for the swap but hope that I will be able to start work in earnest by Christmas. We have a swap meet coming up early next year over here but I expect I shall be flying over to PA in April for your big Hershey meet to get some additional vital equipment! 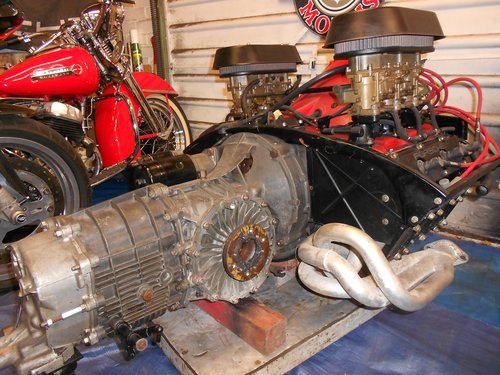 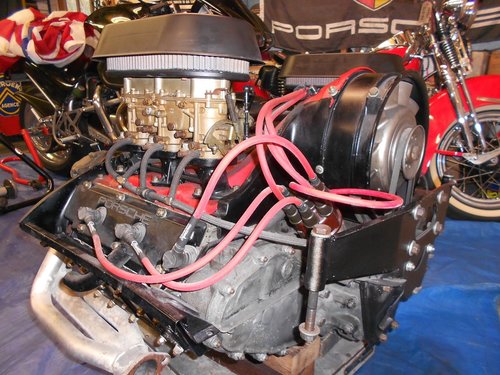 I personally do not get it myself.

I want the 356 driving experience.

However, whatever puts a smile on your face.
Top

I was at Andy Prill's workshop in Essex earlier in the year when he had an open day. I mentioned my thoughts on re-engine-ing a 356 and he said it's the most ridiculous thing you could do to a 356. You will completely alter the handling characteristics of the car and make it into an ill handling beast, don't do it. So, of course, being a person of sane mind and able body, I thought f@&k you I'll bloody well do what I want to do. So I'm doing it. End of.
86 SSE Turbo Look 3.2 Carrera
Cole Foster Chop
75 Honda ST70
94 Buell ST2
74 Dax Cobra
18 Macan Turbo
62 356B T6 (modified)
Top

i agree....you do what you want.....these aren't museum pieces.....almost anything is reversible, if a future owner is inclined
Top

Hi Graham,
I say go for it. I have built several outlaw cars including 911's, a 912 and I'm in the process of redoing a '65 356SC although it's mostly stock with just a little "attitude".

I realize the conventional wisdom is to go with originality. But technology has advanced a lot in the past 50 years and some guys have taken advantage of these improvements. If you are a restoration guy then build your car to it's original stock specs. But if you want some adventure and don't have to do it "the way the factory did it" then you can build something more interesting.

No, Richard, he won't enjoy driving it. It'll be dangerous and scare the sh*t out of him.
Top

Craig Richter wrote:No, Richard, he won't enjoy driving it. It'll be dangerous and scare the sh*t out of him.

Hey Trev love that 930 in the guys tub, I could have bought a 3.2 but I didn't want to go crazy, the 2.4 should be just about perfect. And don't fret about me getting scared, I run a 400hp Cobra and a mental café racer Buell thunderbolt motorcycle, and believe it or not the roads round here a damn full of bends, England don't do straight roads, I'm forever sideways!
And remember, anybody can restore a car, it takes a real man to cut one up!
86 SSE Turbo Look 3.2 Carrera
Cole Foster Chop
75 Honda ST70
94 Buell ST2
74 Dax Cobra
18 Macan Turbo
62 356B T6 (modified)
Top

If I were going to go to all the trouble of hot-rodding a 356 with a flat six (and I'm not about to), I would seriously consider going all the way and switching the drive train around for a true mid-engine car. A lot of engineering, cutting and welding though. That would at least partially solve the tail-wagging-the-dog issue. Oh, and flip the ring and pinion over too. You wouldn't want five speeds in reverse. Or stick a Corvair flat six in it and forget flipping the R&P.
Some days it's just not worth chewing through the restraints.....
Top

I second Wes's idea. Go for it!

I shall post up some pics as soon as I get stuck into this project but for now I'm just collecting parts. I have driveshafts, starter, full exhaust system, (just headers and tail box) oil tank, Koni coil overs and some metal work. It would have been a heck of a lot cheaper to have gone with a Boxter motor. Over here they are as cheap as chips (fries - it's a saying) and I guess a mid engine set up would have been a great handling car, but as you know they are water cooled and I didn't want holes or naca ducts for radiators. I'm really trying to keep the stock body profile, no scoops or wings so staying with the aircooled family was the only option. Also as I'm only a dumb hot rodder I didn't want to get into wiring up ECU's and sensors so it had to be carbs and although this 2.4 is on Zeniths I have learned recently that Webers will soon become available again. I would not have gone to PMO's but Webers I might just if the budget allows.
There were three deciding factors that made me really want to do this swap, first was Prill and Co telling me otherwise, second was that my BT6 is just about at the bottom of the intrinsic value scale and thirdly, I have a friend who runs a stock BT5, all very immaculate and quite perfect, but it's a slug, just a slow noisy old car. Hope I didn't offend too many folks but it's honestly one up from a Morris Minor and one down from a MGB. Apart from a Crossley or a Bantam I don't think there are any American equivalents.
PS don't bug me I used to run a 210 '57 Chevy and a 98 F150 - great truck!
86 SSE Turbo Look 3.2 Carrera
Cole Foster Chop
75 Honda ST70
94 Buell ST2
74 Dax Cobra
18 Macan Turbo
62 356B T6 (modified)
Top

Best of luck, Graham. Let us know if you survive the first test run.

Hi Graham
I know what you mean by Andy's 'opinion' but he does know what he is talking about. He would be able to build you a super fast reliable 4 cylinder engine.
Much more balanced than a cumbersome 6 pot hanging out the back! And probably much more of a match than your 2.2 !
Only in my opinion.
I'm nearby in sunny East Sussex, let me know when it's finished, I will come and take a look!
Cheers Jay
Top

Go for it Graham, isn't that what being an outlaw is all about?
Nick Pike - London, England