I can say this from my research talking with potential restoration shops;

If you are in a hurry to get your 356 restored, you probably need to reset your expectations. All the shops that I've spoken with presently have a 2-3 year backlog on the metal work.

I suppose in the context of a 60 year old car, what's a couple more years?

And away we go! 6 years after my last post, I've decided to start the project. Took one last long drive, put registration on non-operational status (that's a CA DMV thing) and started formulating a plan for getting the job done.

I've decided to do the job myself and anticipating this will take about 5 years, give or take a year or two, since I plan to be fully employed for that duration.

When I rebuilt my engine, I pretty much followed "Secrets of the Inner Circle" step-by-step. For the chassis, I've read Ron Roland's "Restored by Hand" and plan to use it as my base project guide, of course using other reference materials as well and seeking help from the forum members when needed.

Currently finishing the design for the jig I will use to hold the chassis, and starting to removing and store some of the removable bits.

I know this is more fun with pictures, so here's a couple interesting ones.

What's left of the front drain on the battery floor. I have a replacement panel for this but it will have to be modified to eliminate the center impression and add a drain. 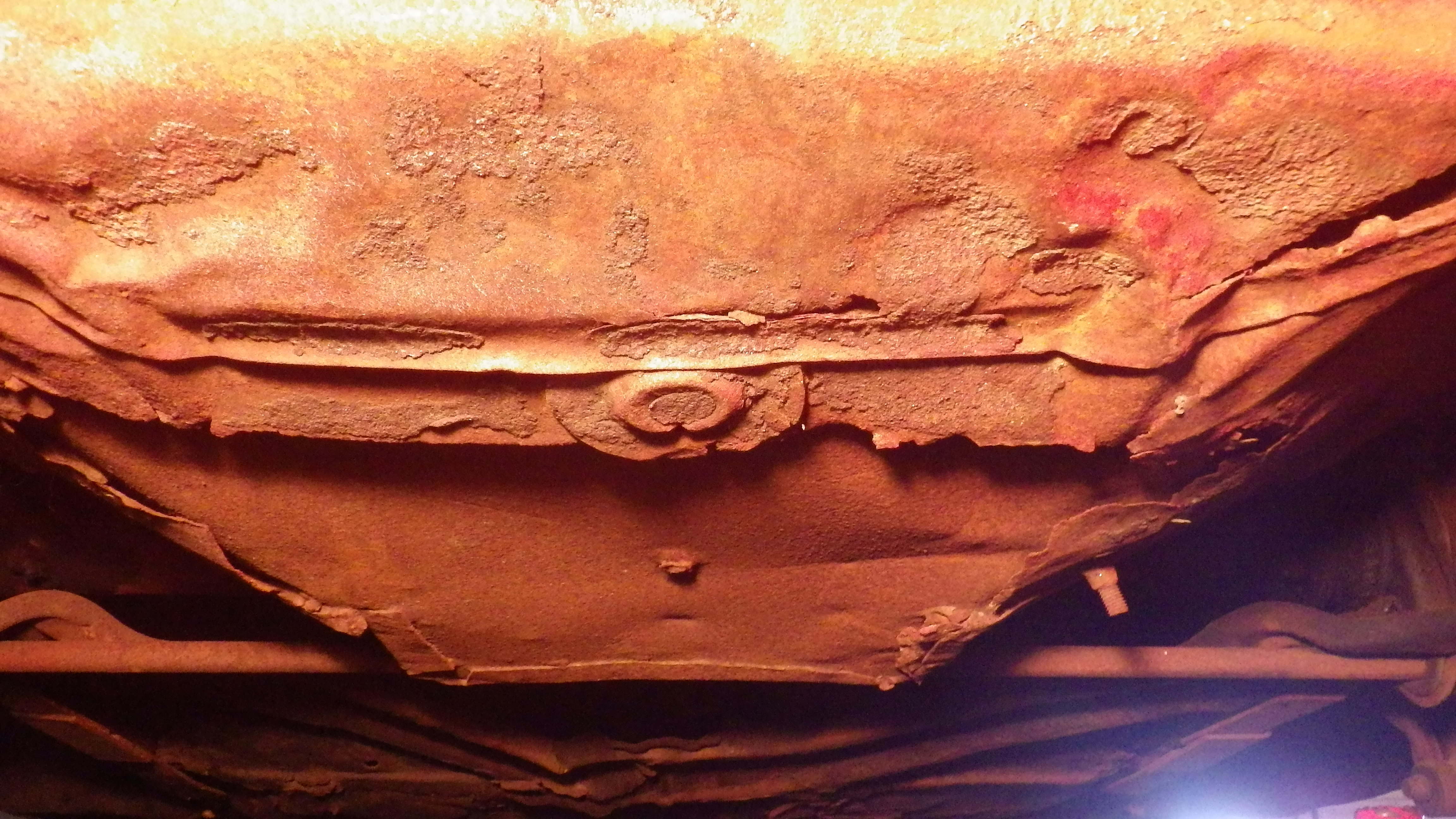 Horror show with what's left of the metal around the turn signals. 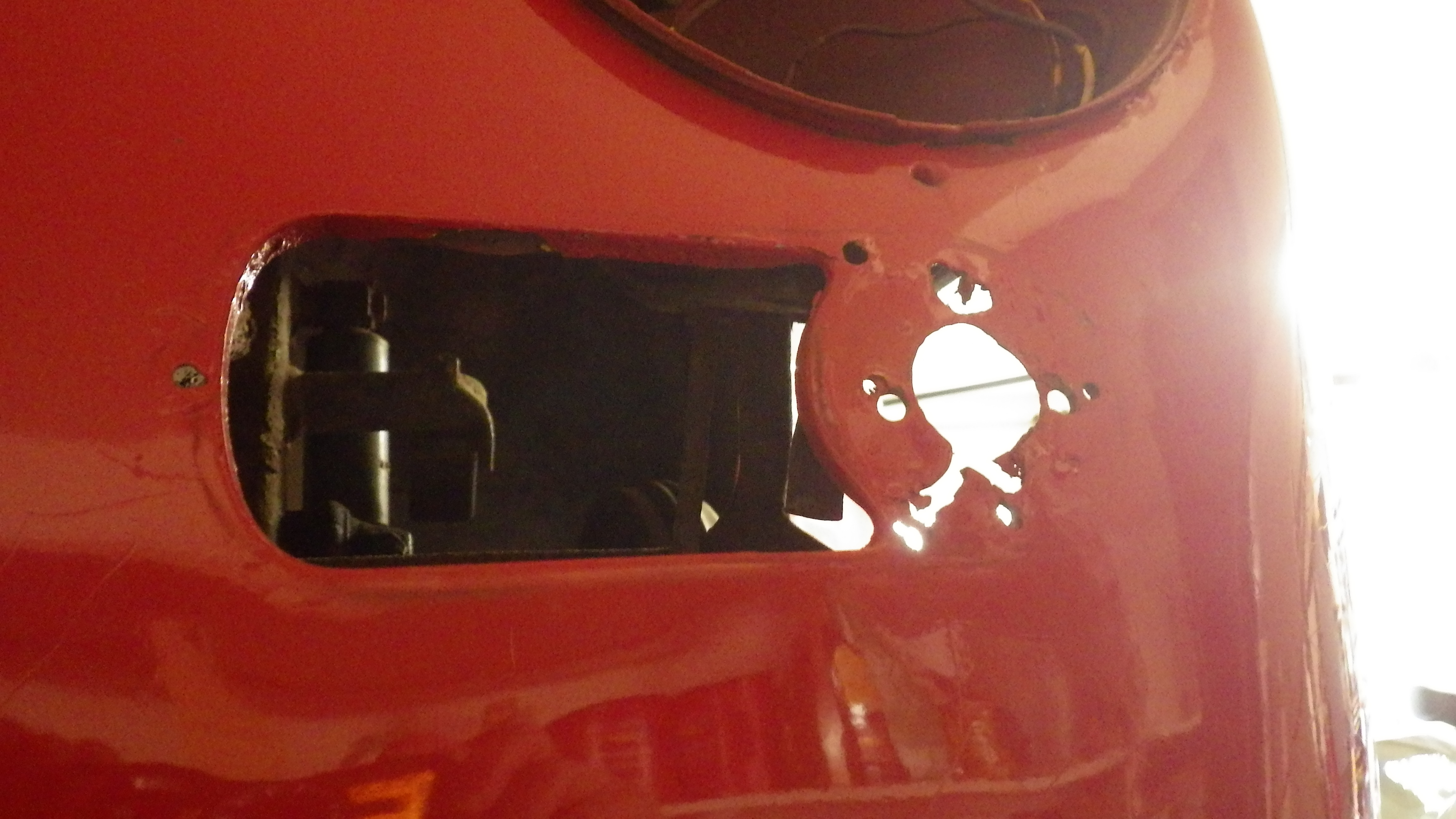 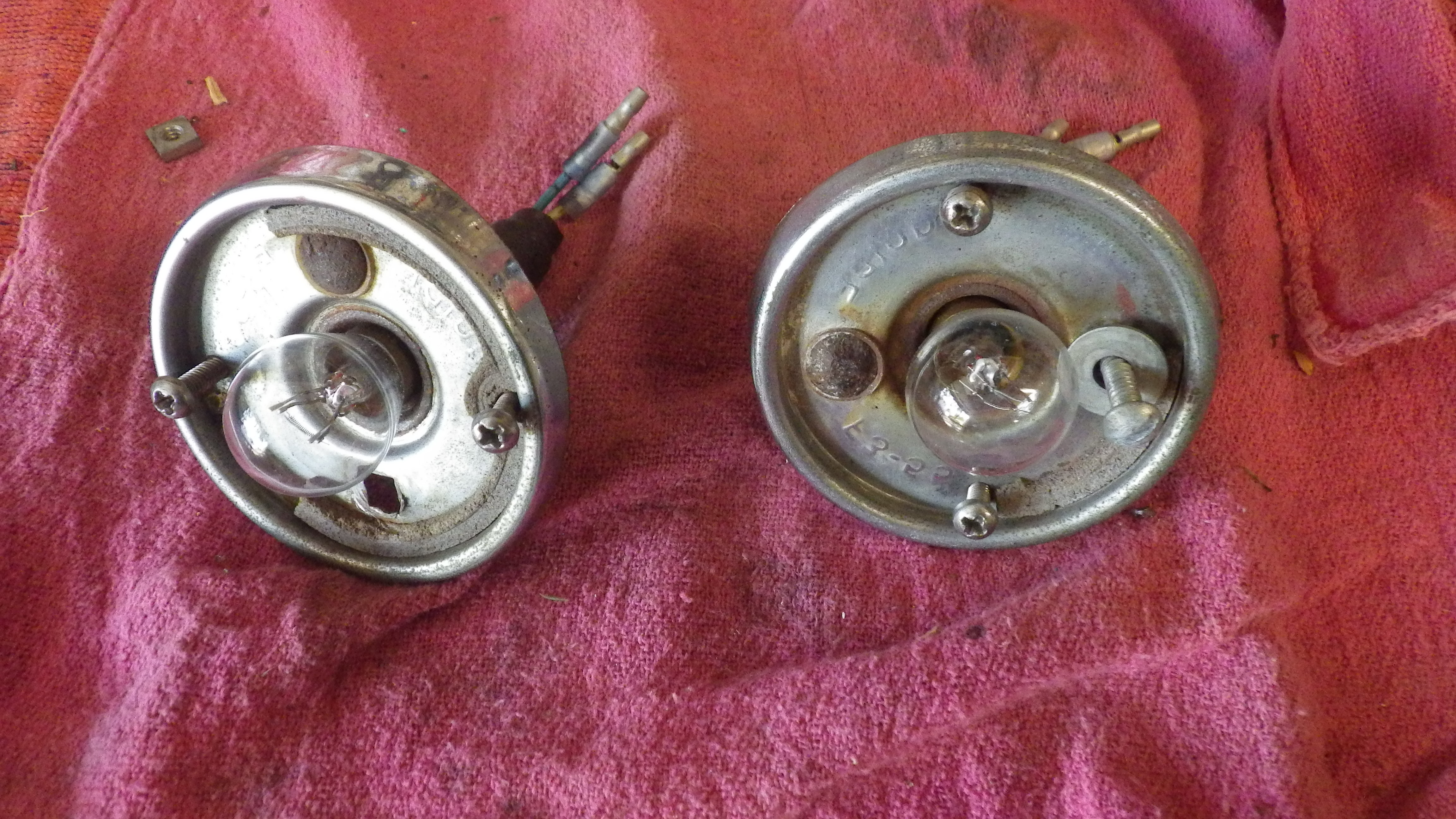 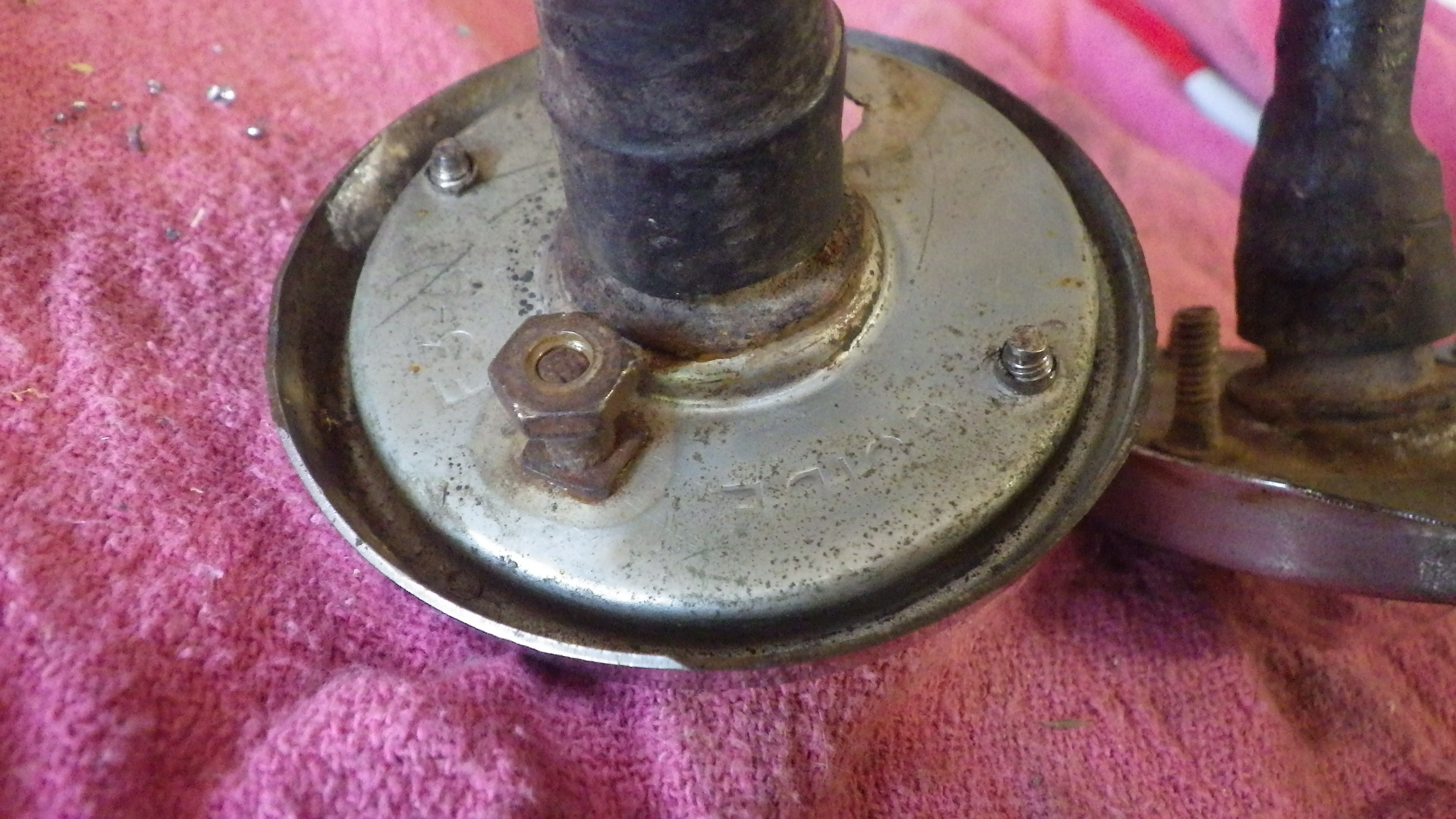 For those of you who are just here for the dirty pictures, here's the closing panel with the patches removed. The stuff you see in the lower hole resting on the longitudinal is a mouse or chipmunk nest complete with acorn shells. 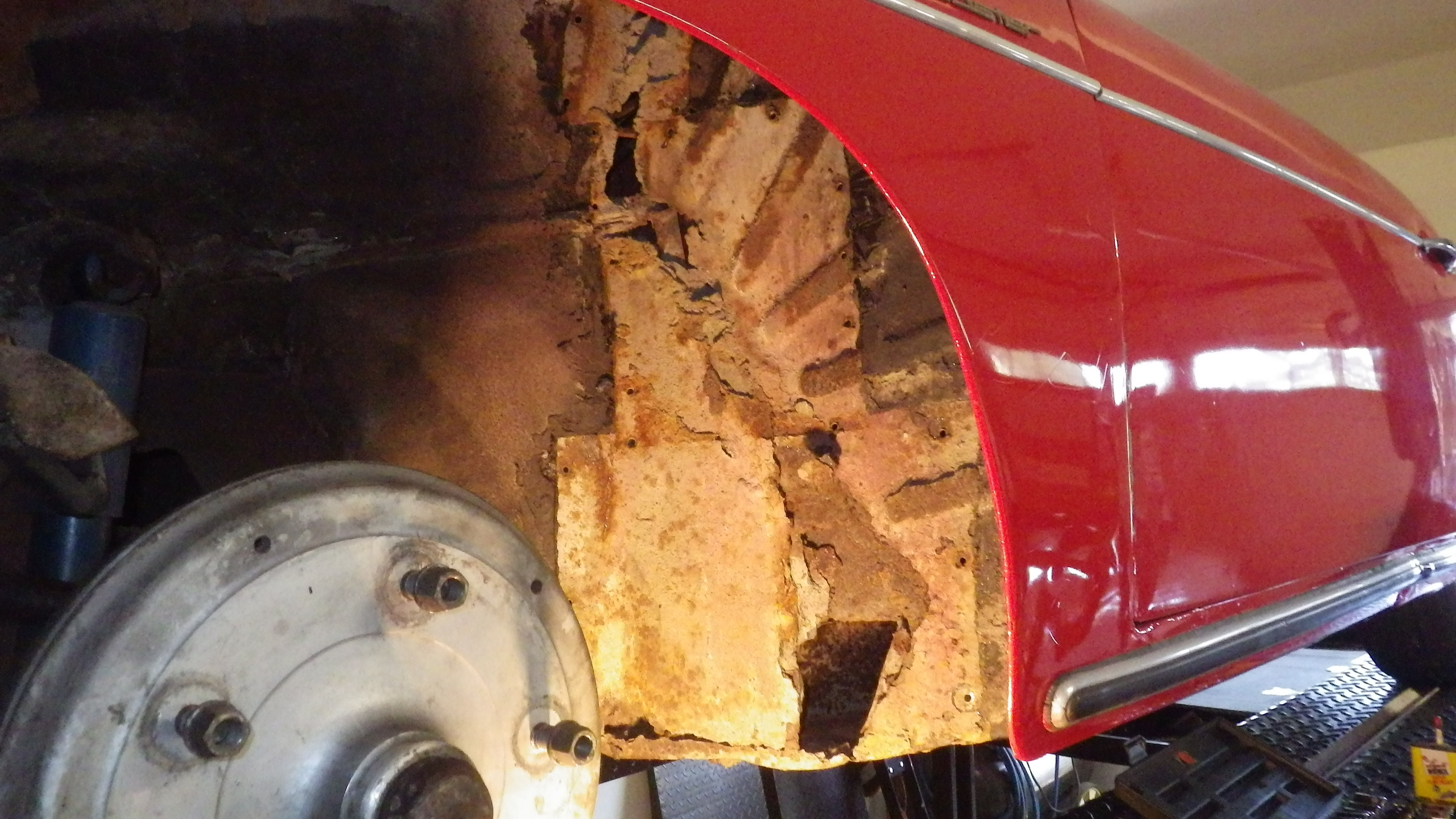 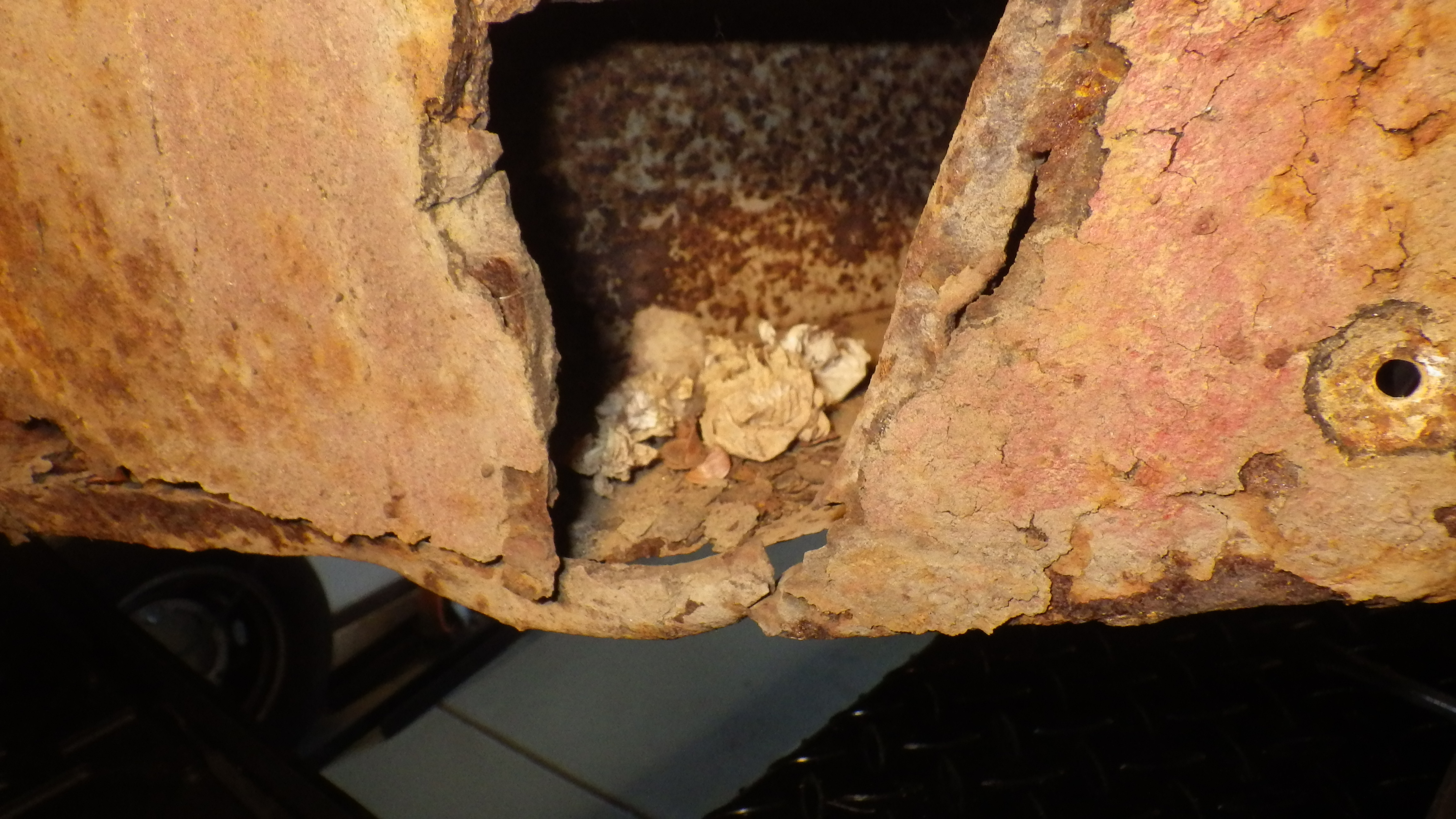 Serious question for those in the know. The entire front end is going to need to be taken apart and re-assembled with good metal. Is the right order of things to start with the mid-section (longitudinals, floor pan) and then work toward the front and back from the middle? The reference points for ensuring the chassis is straight are fore and aft of the floor area, at the front and rear torsion bar points respectively. So if the mid-section is re-built first it has to be done such that front beam and rear torsion bar carrier can be attached/re-attached in the exact correct location. Other approach would be to get those in the right location first and then build in toward the mid-section.

Jeff - while this project is well beyond my abilities, I think you are going to have to have a Celette bench to get the car back to the correct dimensions and to keep it stabilized as the metal work progresses. At some point, your car will probably look like the one in the picture of the Speedster below. 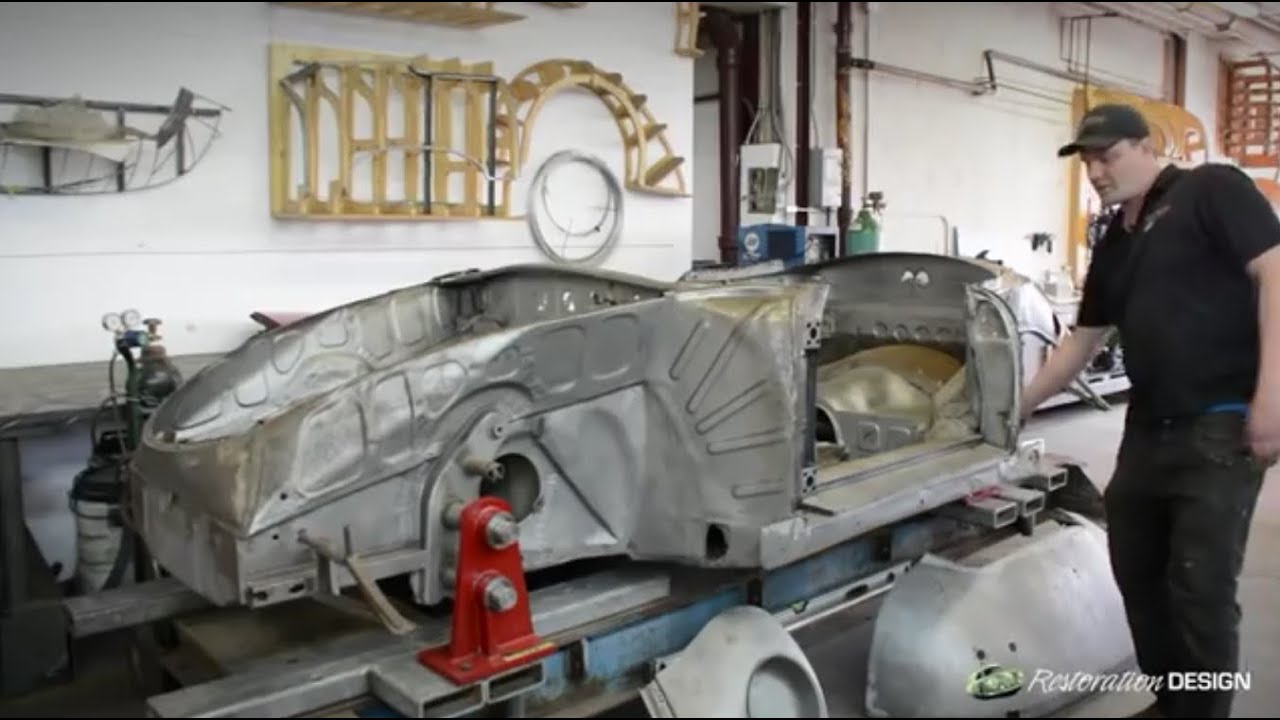 John Willhoit in Long Beach or Steve Hogue in Ventura among others have resurrected cars with rust and damage such as yours, but it's a long, expensive road.
Restoration Design in Ontario Canada is another resource you should be familiar with for replacement parts and advice. 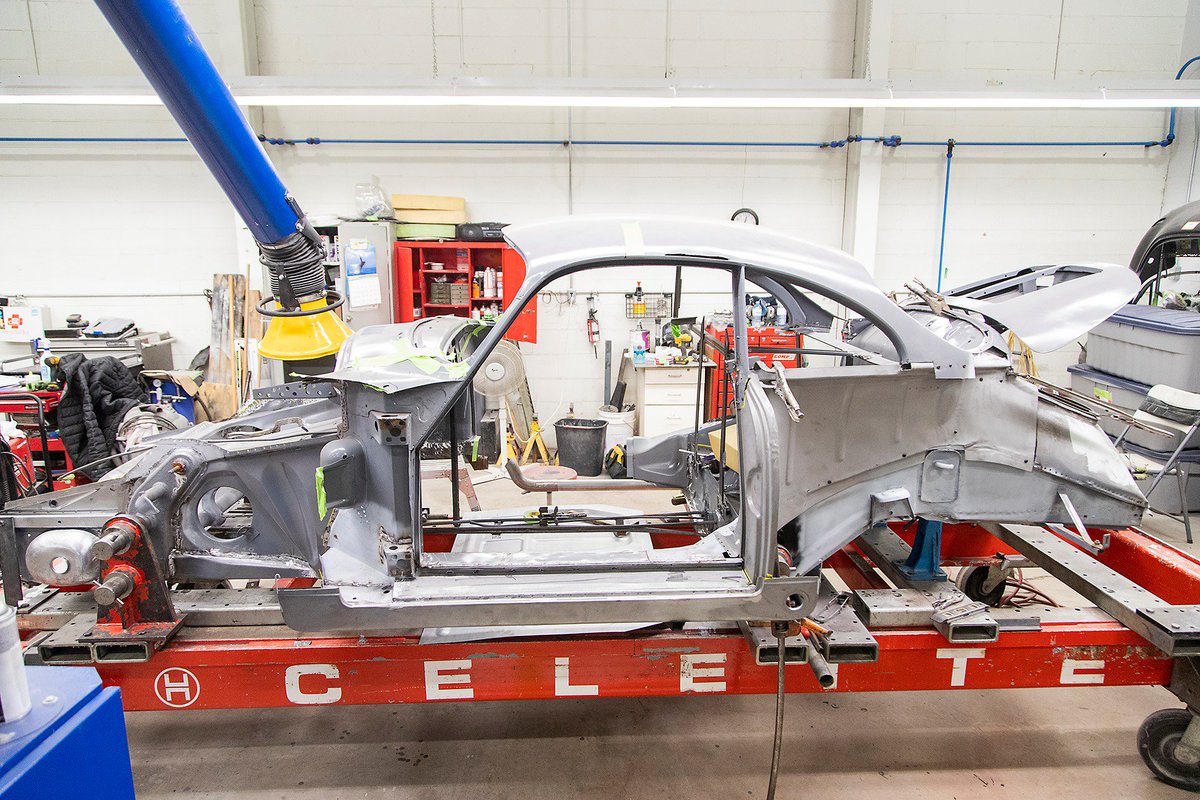 Greg, you raise a number of good points.

I will need a jig, and I am currently getting together the pieces needed to build one that will work for me. It won't be as robust as the Celette benches pictured, but will use the factory specs to locate the important dimensions.

The last long drive I did with the car was to the Willhoit shop. Their work is fantastic and I wouldn't hesitate to have them restore my car. But, I really want to do this myself because I enjoy this type of thing. Plus, I don't want a car that I will be hesitant to drive because I spend $$ having it restored. I'd rather have the fun or doing the work myself and then not feeling bad about taking the car out for a drive. That's one of those things that is probably different for every person, so other folks will do things differently and that is totally OK.

Finally, I have a very long list of metal that I need. I've purchased some, but RD will be getting a call from me very soon

Great story! Will be fun to follow your progress on the Speedster. Have yet to start the resurrection on my pre-A Speedster and am cautiously optimistic it won’t need tons of new metal.....

Thanks for telling your story on this car!

Our best to you.
Top

Big project but totally worth it and I really share your vision of doing it yourself to keep it as a driver !
Keep us Updated !
Antoine
Top

As anticipated, it's taken me a while to make any progress. I did reach a milestone yesterday, however.

I've been working through the design of my jig and had been missing a key detail from the chassis dimension drawings around the area of the front torsion bar tube locations. In the film "Made By Hand" you can see the factory workers checking the exact location and trueness of the tubes using a jig and 4 plugs (2 on each side, of course). Obviously it is critical that the suspension mount points are all in the right location for the car to go down the road straight and be properly balanced. 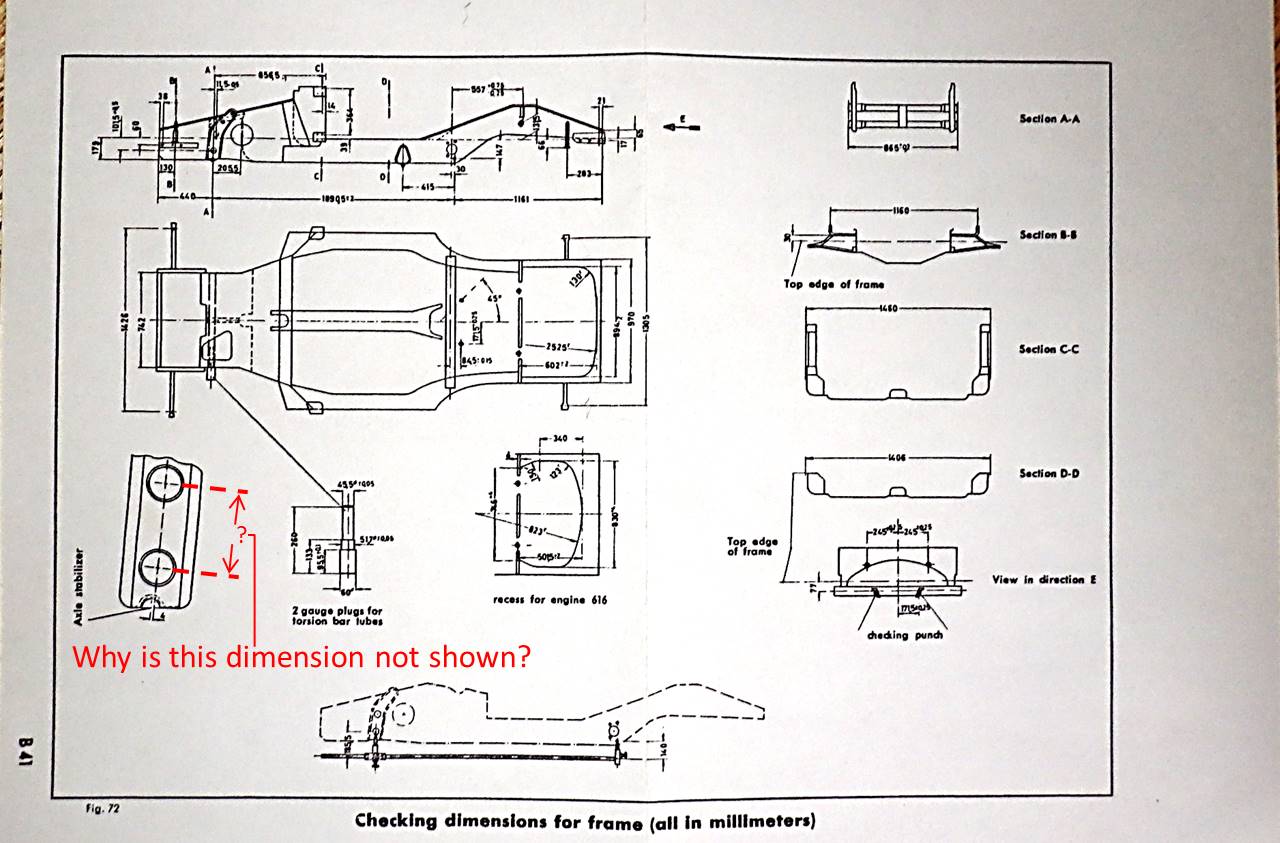 Unable to find this dimension anywhere, I've resorted to measuring on my known good side. To facilitate the measurement, I needed to back out the bearing cases enough to get my calipers solidly on the outside surfaces (that mate with the inside of the tubes). Measured the outer surfaces then subtracted the diameter of one to get the center-to-center dimension. Here's what I found. 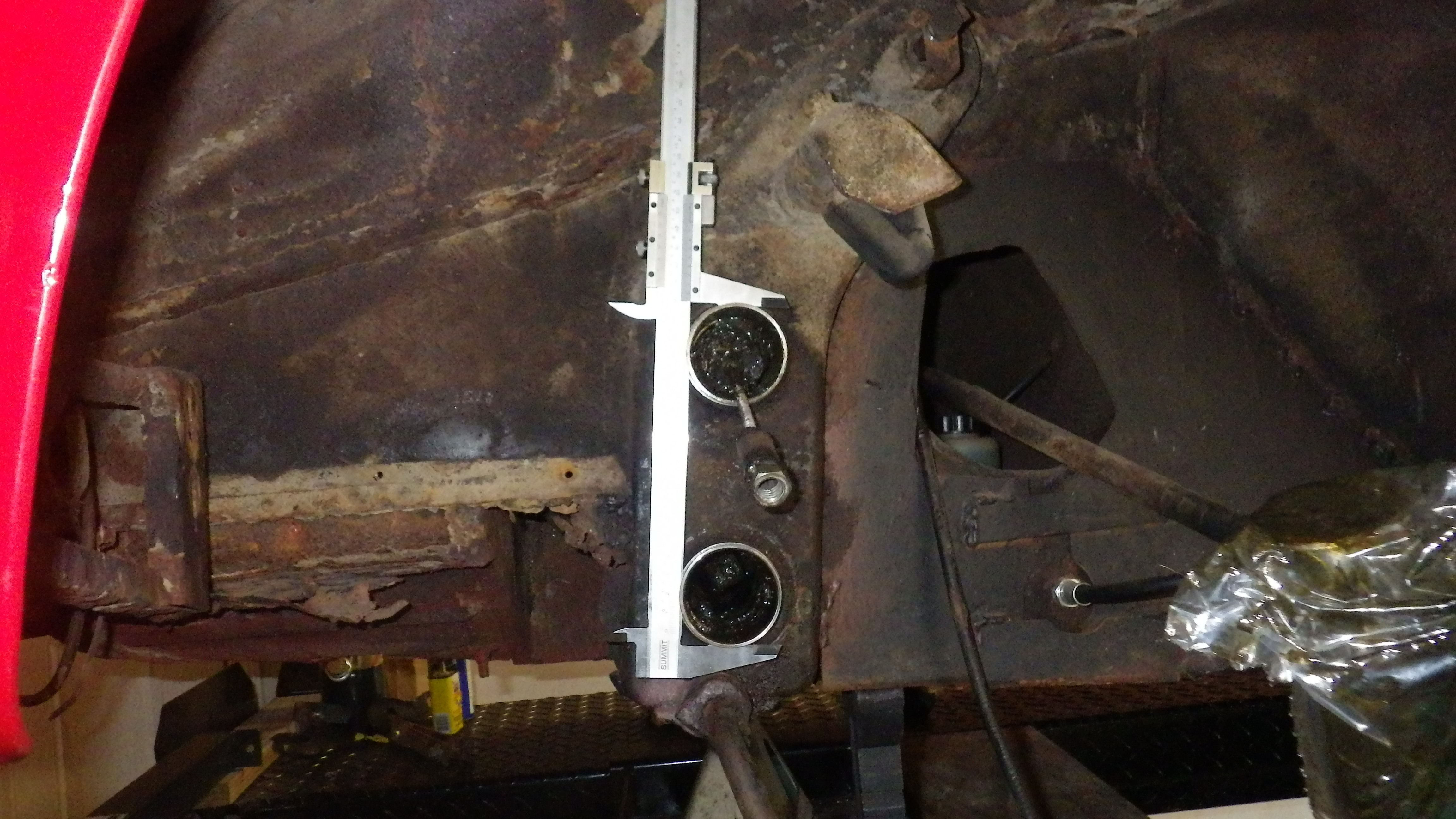 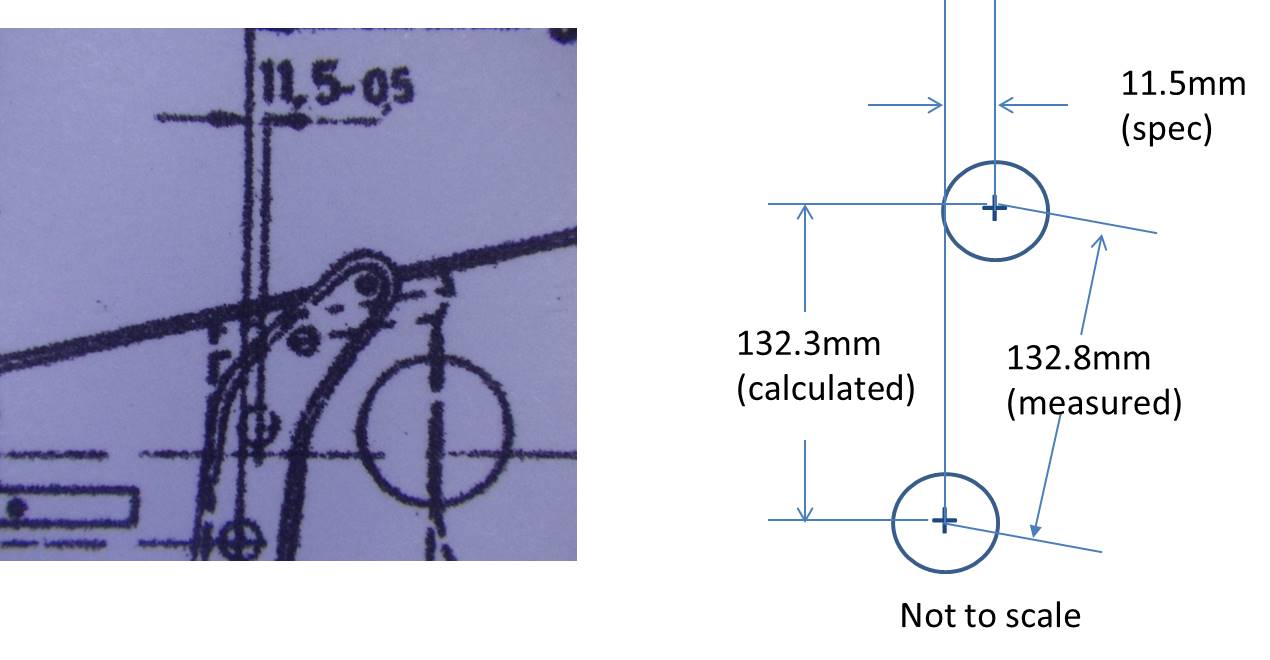 Now I can start building up the front part of my jig, and that will likely be the subject of my next post.

Been making some progress and thought I would share what’s gotten done.

I’m nearly done with the chassis jig which I expect the car will be on for several years. This is a custom designed jig that uses my lift rails as a base, and is not a substitute for a Celette bench which supports pulling and pushing to align the metal. This is just to support the chassis and to ensure it is “square” when I’m removing and replacing the various rusted bits. I think it will be nice to be able to elevate the car to different levels while working on it and then stow it away by lifting it up to the ceiling.

Step 1. – Make sure that the lift is level. It isn’t level when it’s sitting on the garage floor because the floor isn’t level. But it has very nice adjustable stops at all 4 corners which allows for getting it perfectly level while up in the air. I borrowed an idea from Tom Perazzo and made a spirit level out of PVC pipe which ran to all 4 corners of the lift, then adjusted each corner. 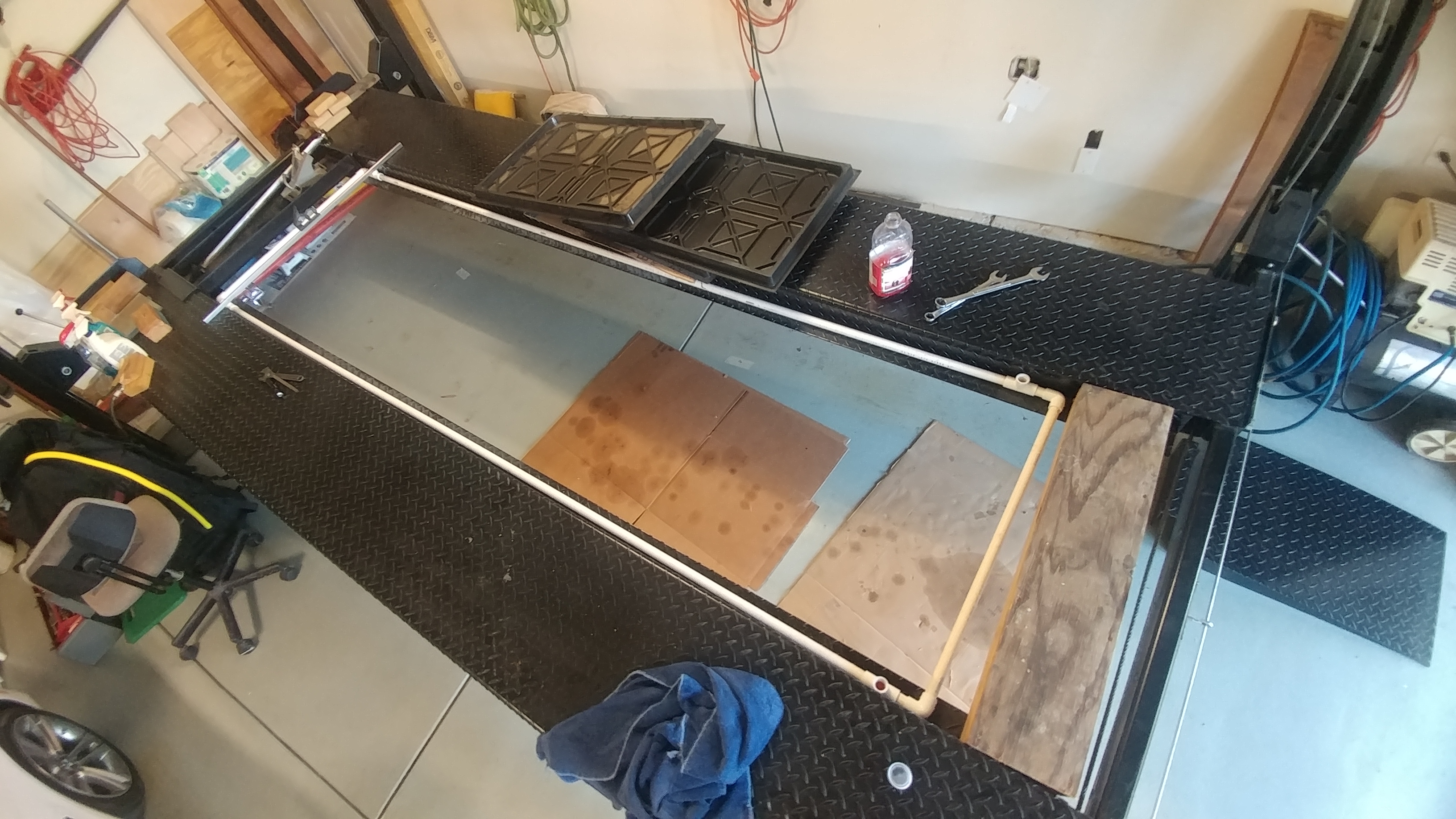 When the water level at every corner is exactly the same, levelness has been achieved. 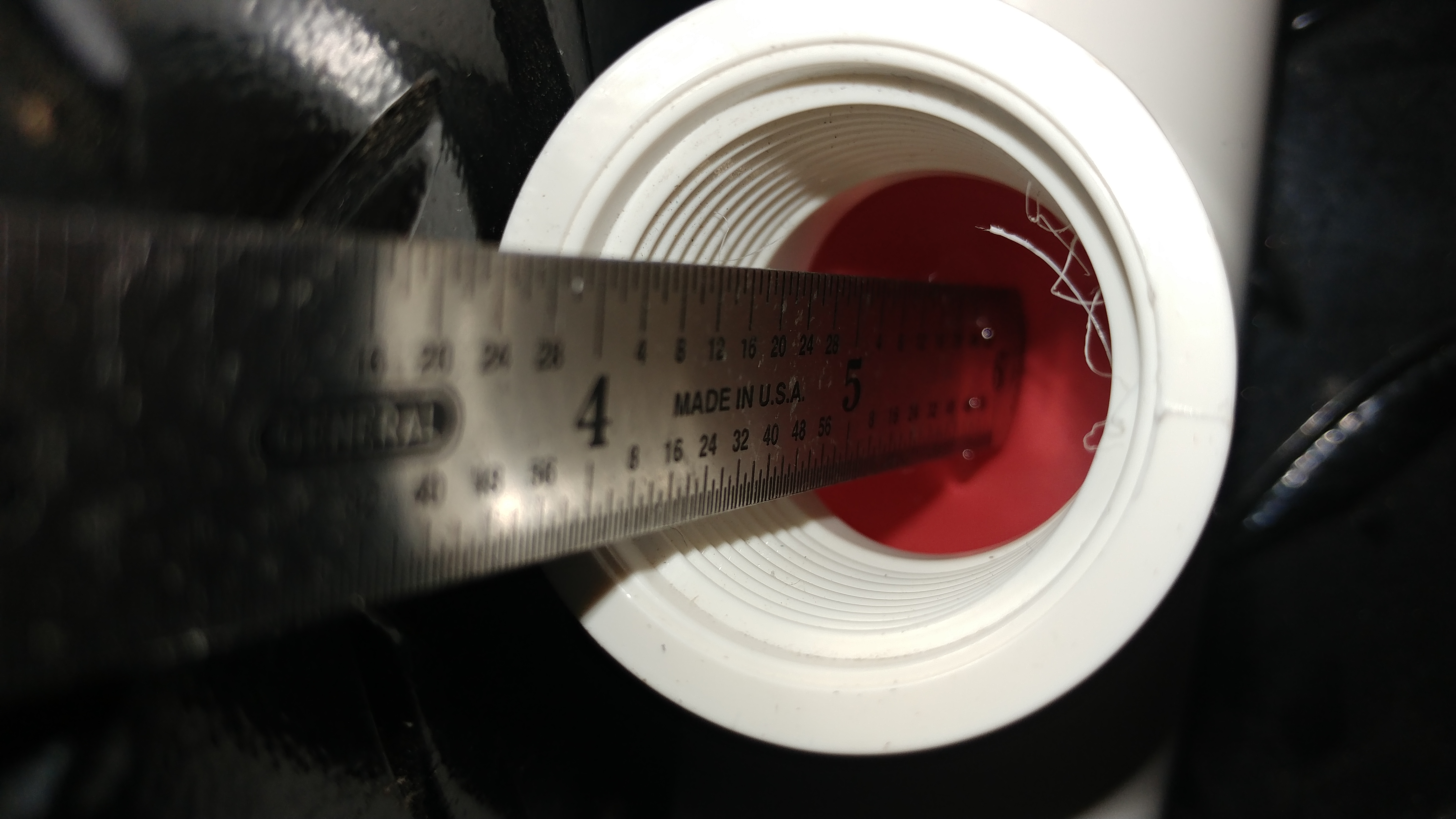 Step 2. – Rear support is relatively simple because it uses one of the stand-offs for the rear torsion bar cover as a connection point. So it connects to the chassis with an M10 bolt and then connects to the lift rails with qty. 6 M10 bolts. It will also have the ability to attach some 150mm casters for moving the chassis around (I won’t need these until later). 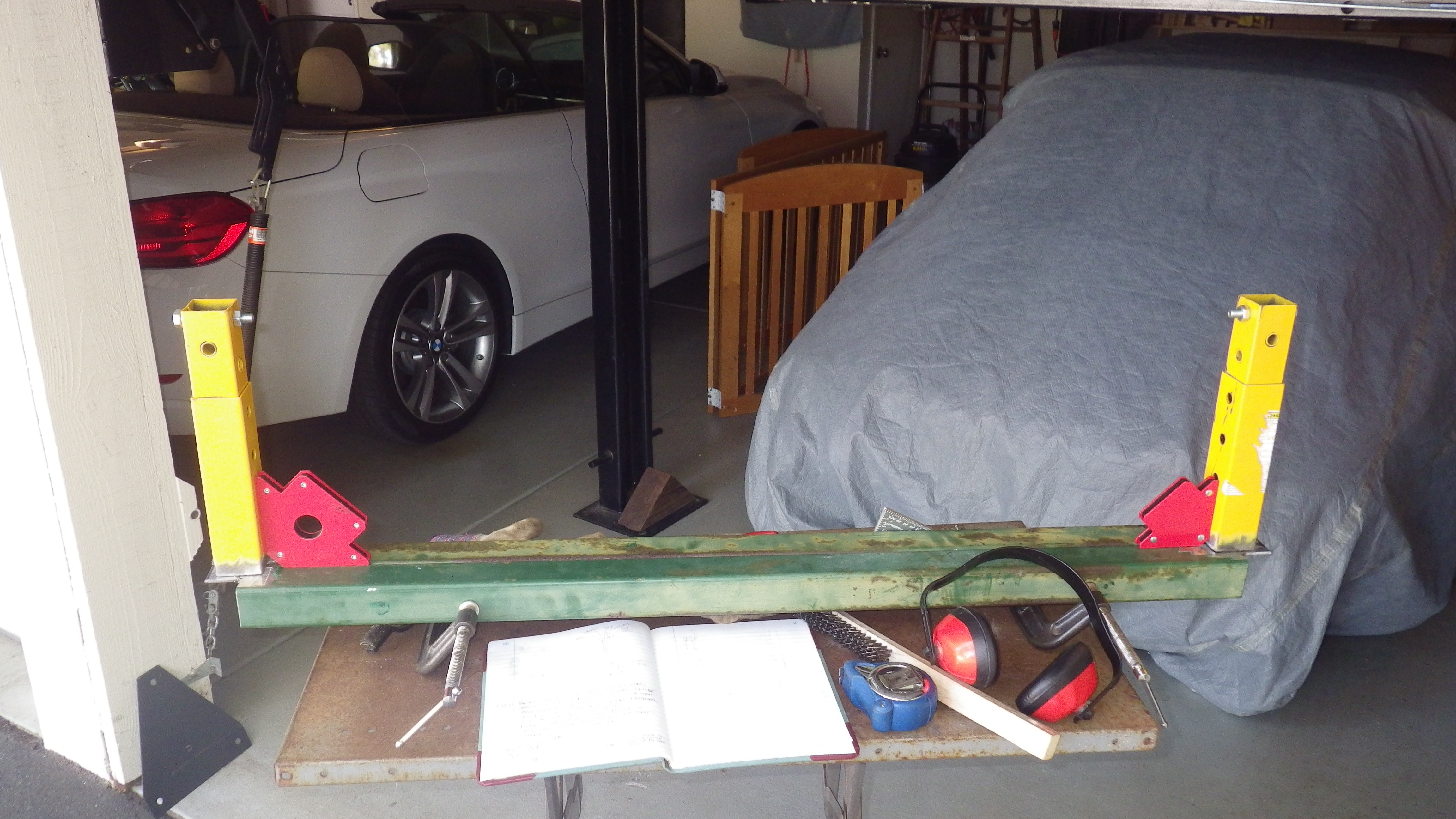 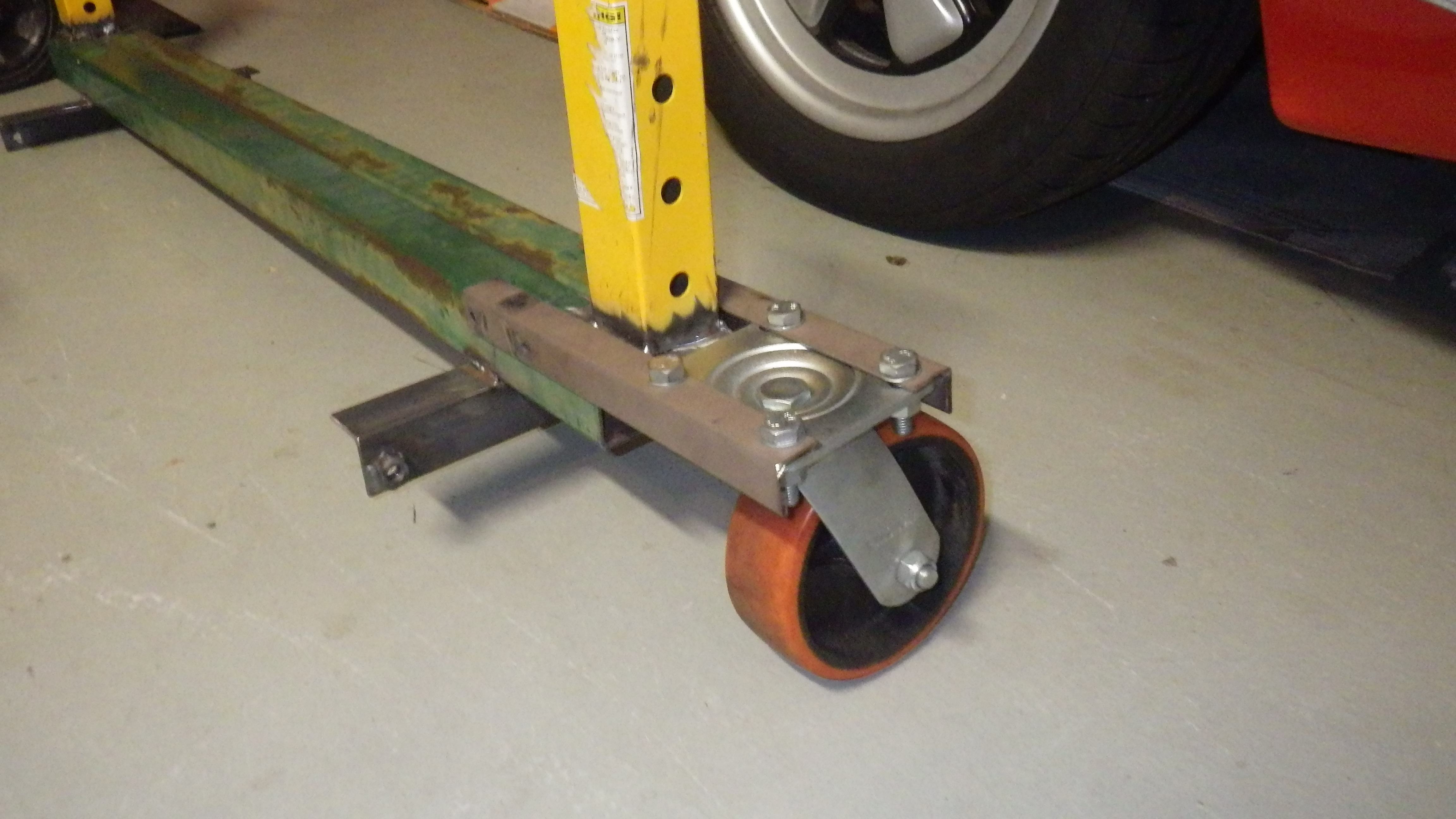 Step 3. – Front support is much more complicated. It uses the front torsion bar tubes as the connection point to the chassis and therefore needs to have some way to use “plugs” that extend from the jig into the chassis. Locating these plug points was complicated by the fact that the factory chassis spec drawing was missing a key dimension (see previous post).
Also, fabricating this front jig required making some semi-circular cuts into square tubing which was not a process I have machine tools for. Tried a hole saw, but it wasn’t making a clean enough cut. I ended up using the die grinder to make a bunch of small cuts and then finishing it up with a grinding wheel. 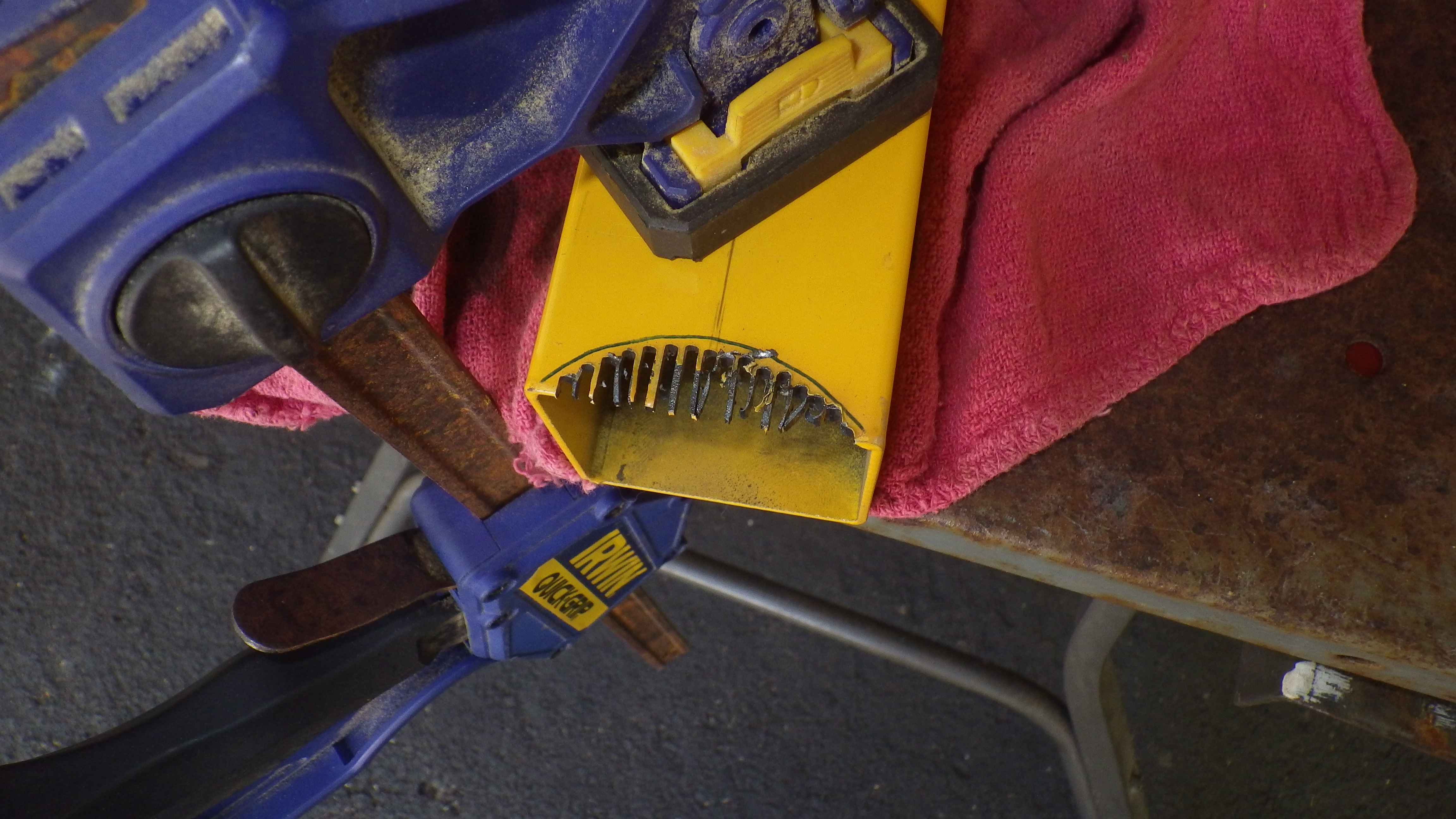 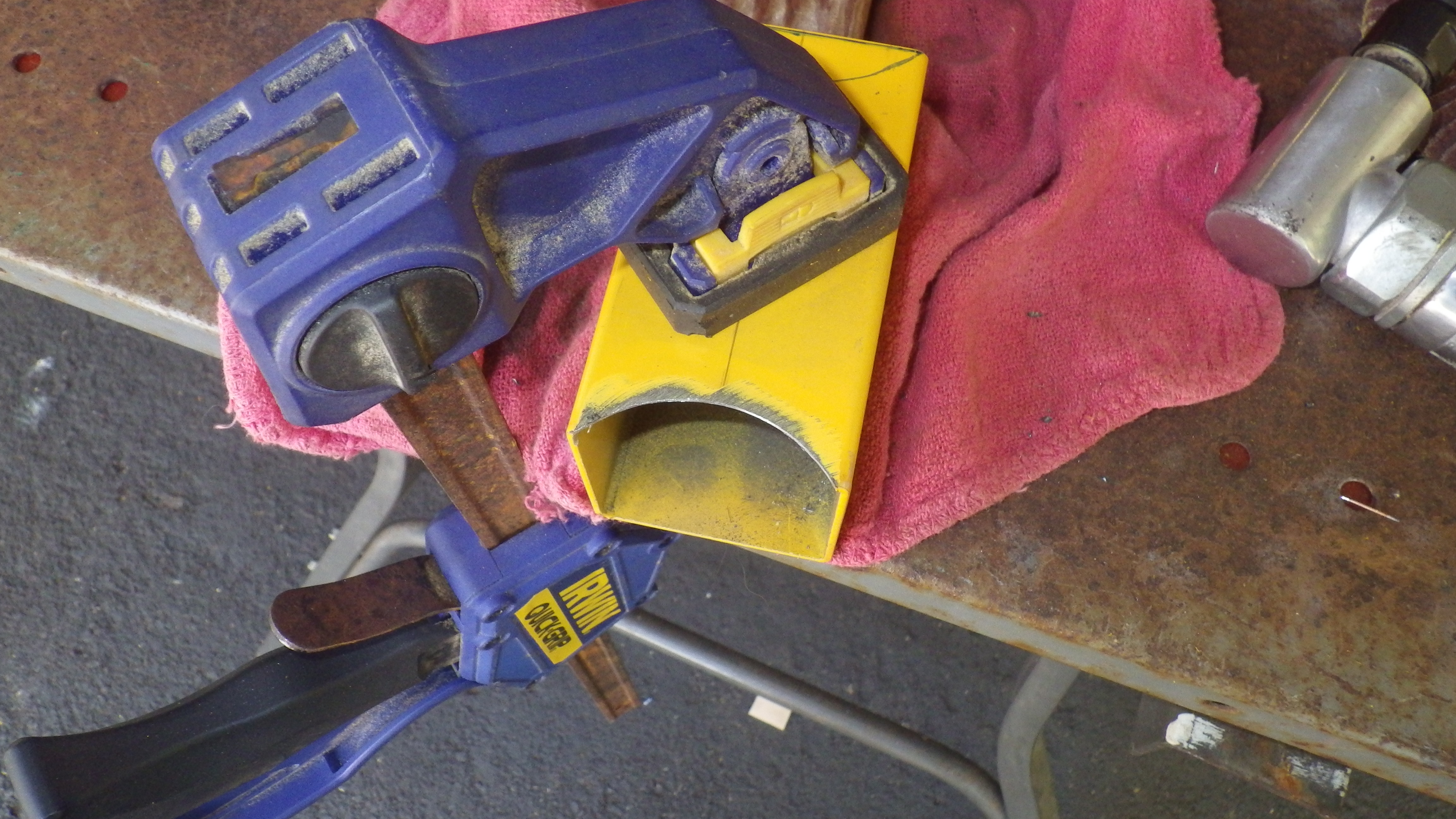 To make sure that the plug points were straight and true on both sides, I used two 5’ sections of pipe to keep them lined up while fabricating. This front part of the jig also connects to the lift rails with 6 M10 bolts to secure it in place. 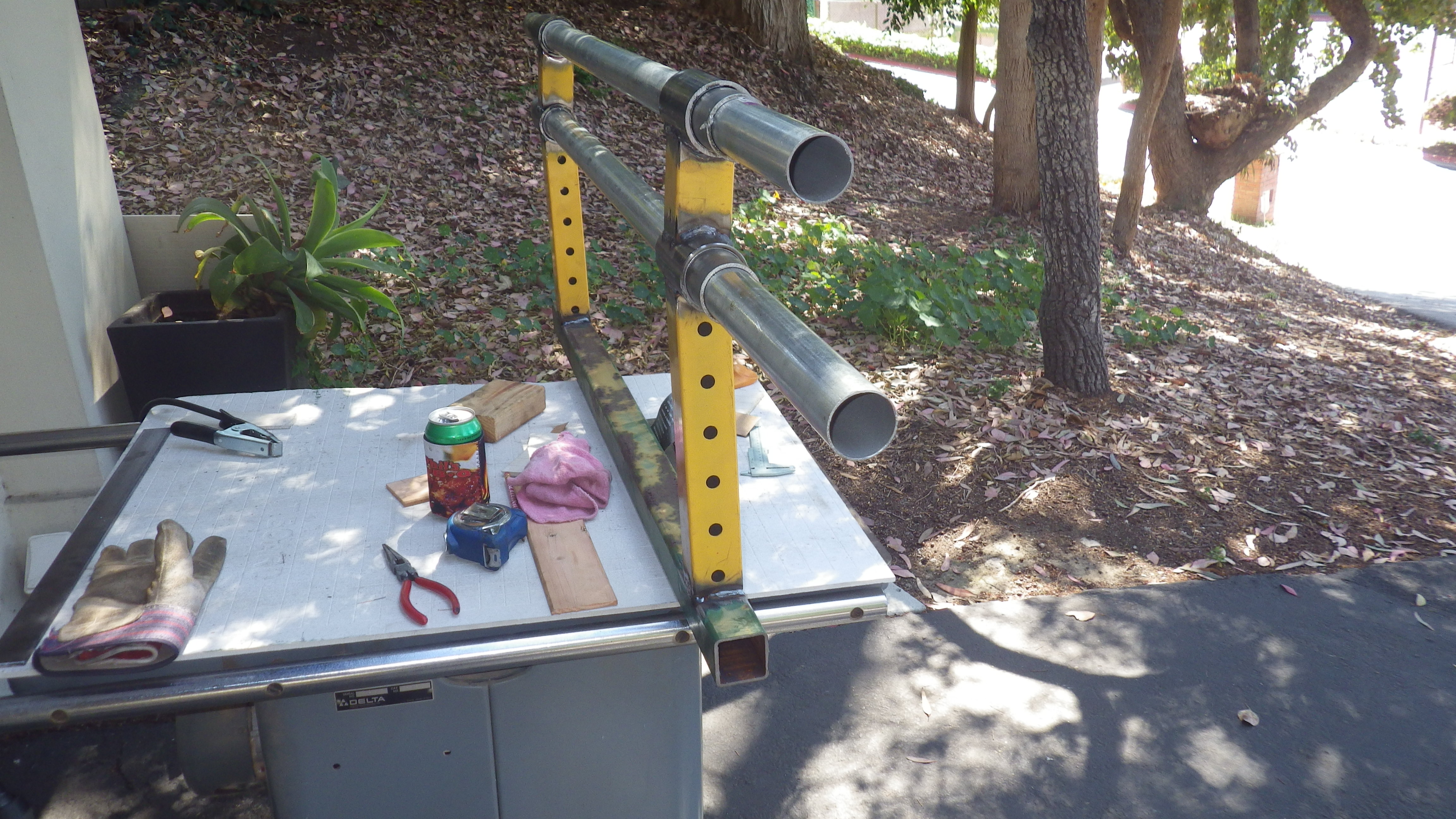 
Final bit of progress was to re-assemble the front end of the car so I could drive it off the lift and test fit my jig. Height is fixed by design to ensure all suspension points are at the correct height relative to each other. I’ve also got no ability to adjust the angle of the front plugs, so if my front torsion bar tubes are bent or out of alignment, the plugs will be “no-go.” That is also by design and I suspect that there are issues with the passenger side based on previous rough measurements. If that’s the case I will fix it and then have my suspension points in the correct places. 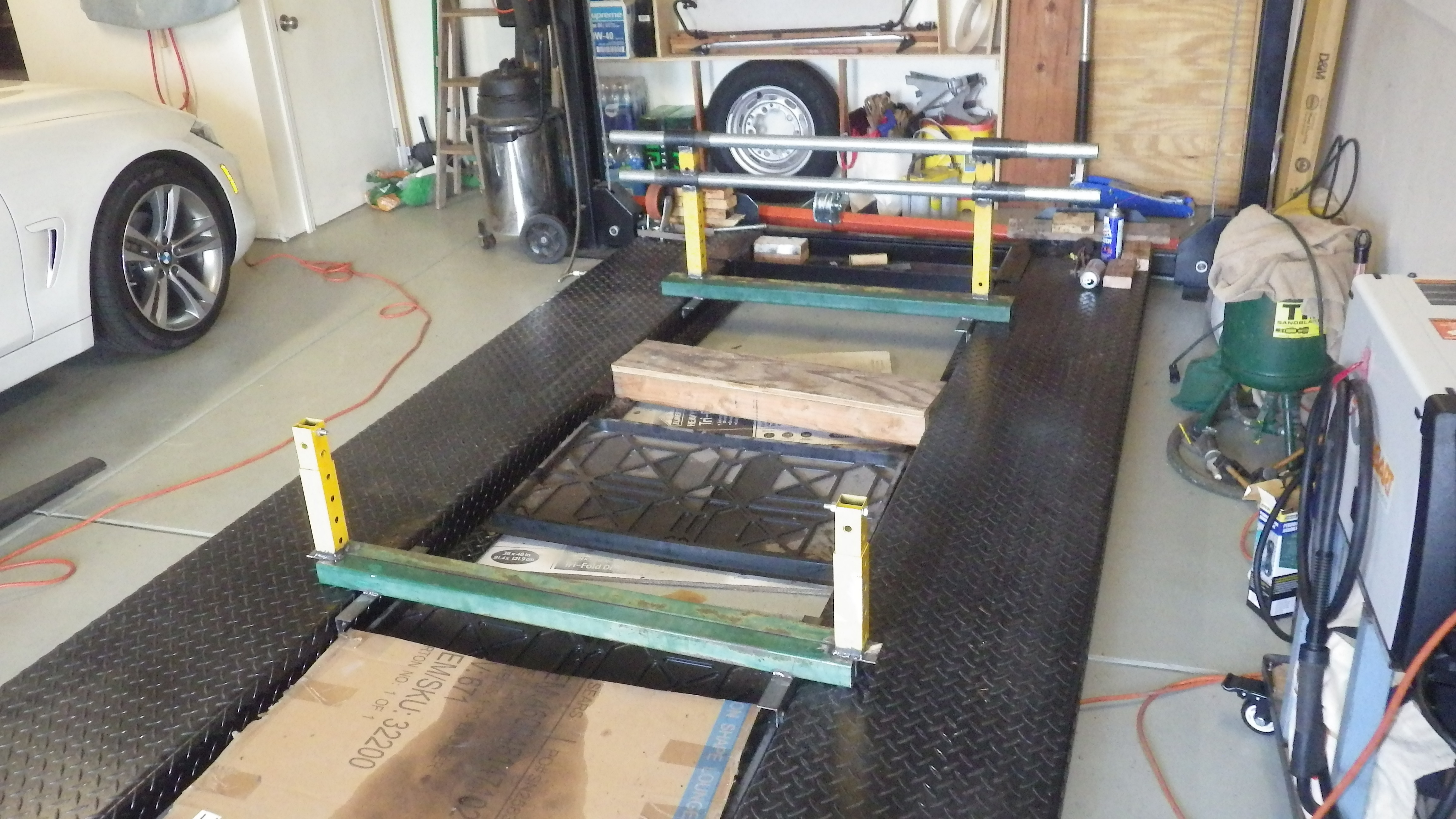 Next on my list of things to do is change the engine oil before pulling the engine Then I need to find a spot to store the engine and transaxle for a couple years. We haven’t had visitors for a while so maybe I can put them in the guest bedroom?
Top

Hi Jeff I was curious where you lived in Cleveland. I am still here. Your severe rust pictures look very familiar. PM me. You don’t seem to have an email on file
Cleveland Ohio
62 Cabriolet
56 VW
02 IS 300
04 Sienna
Top
Post Reply
26 posts