The front suspension is rebuilt: new link pins, king pins, tie rod ends, Koni steering damper, a 16mm sway bar from a C and new sway bar bushings. The left front C-link was bent along with the left lower trailing arm, so both were replaced. Also new front brakes were installed: a dual master cylinder, Zim's disc brake kit (which allows the original wheels to be used), the steering gear got new seals and a new steering coupler was installed.

Removing and installing the king pin takes a fair amount of force. Its enough to stress a 20 ton press (you could hear it groaning). I was concerned about damaging the C-link with all that force, so rather than support the press on the bottom of the C-link, the support used was the bottom king pin bearing. Here is a photo that shows how that worked: 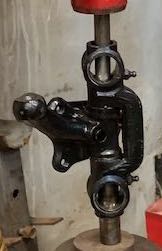 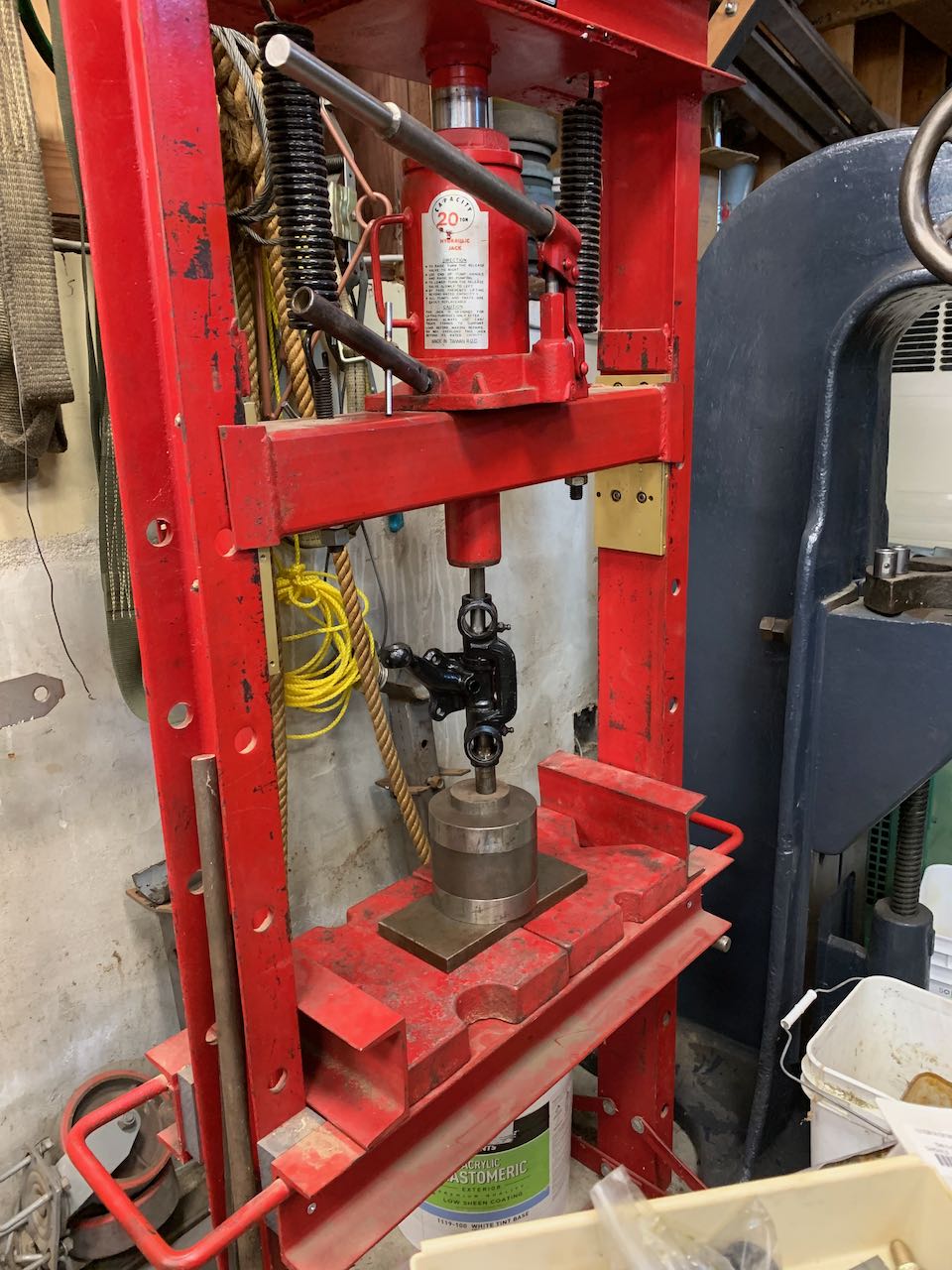 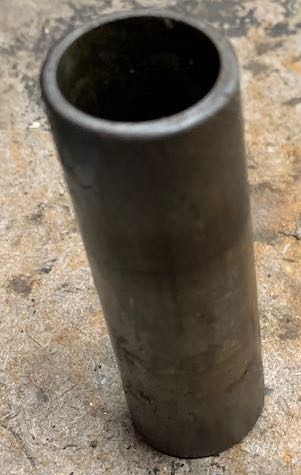 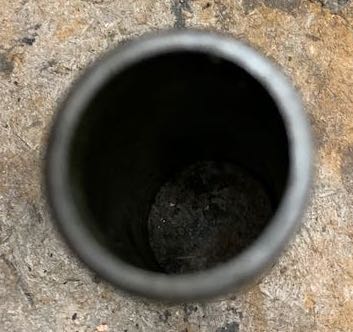 Pressing in the new king pin was also a concern for the same reason, so I installed the bottom link pin bushing and even placed a link pin in place while pressing in the king pin. Another good reason to use VW link pins (steel bushing being stronger than bronze). 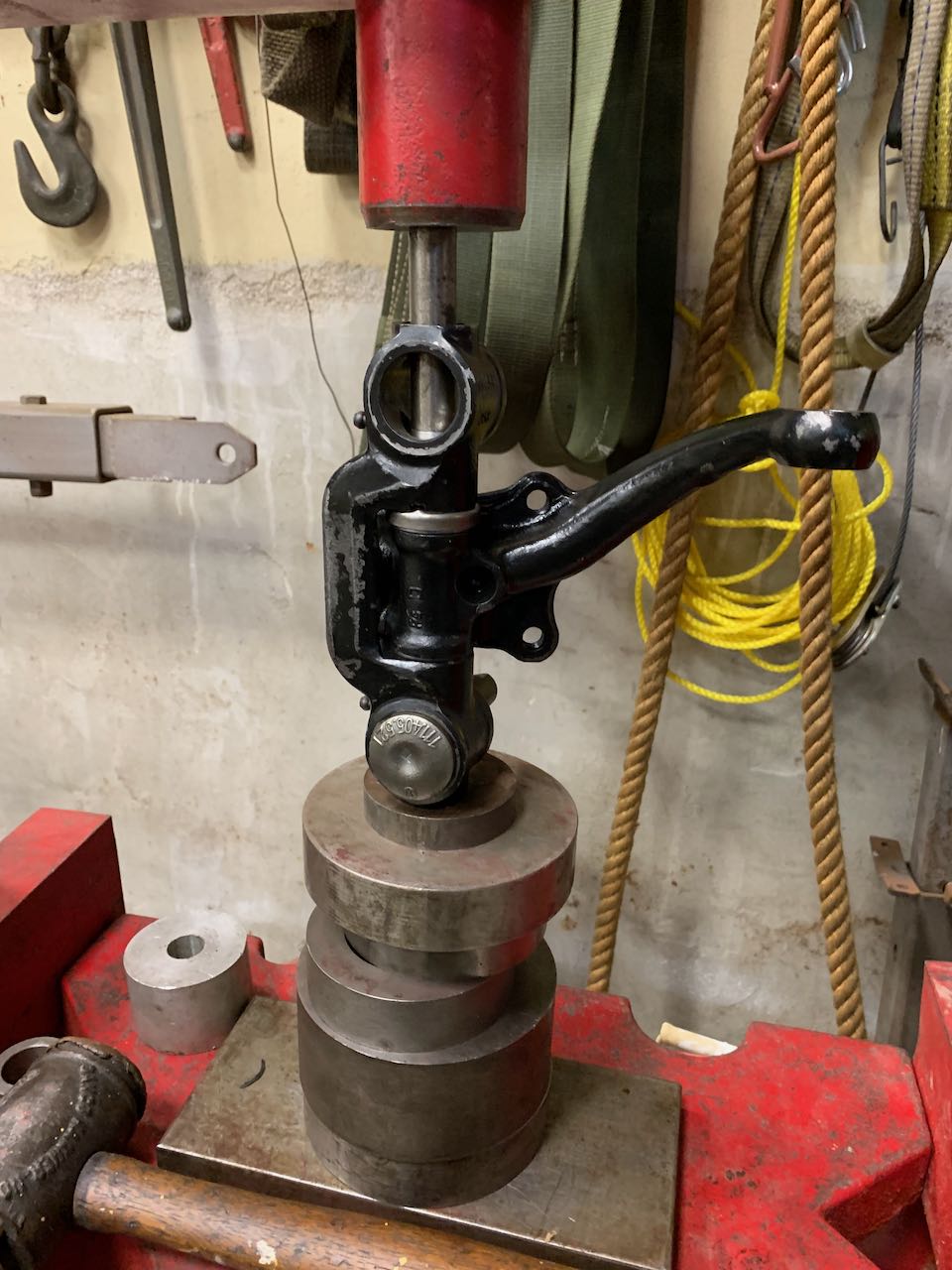 Look at you! Awesome saving those details! Good luck with the new welder.
Top

Mark, thanks for reading along. I have to admit that cutting out the battery box floor didn't go perfectly, but I also know that if I aim for perfection, nothing would get done. Sometimes you just have to forge ahead and do it.
Top

Hey Dave, I was one of the local Monterey folks participating in that BaT auction, cool to see what you are doing with the car, can't wait to see it cruising down Ocean View Blvd. Bill
Top

That is coming along nicely Dave!!
Jules

William and Jules, thanks for your comments.

Its a driver again, but I need to put a top on it before I drive it around. Autos International has the top, and they have sandblasted the frame and it is getting repainted. They do not have the German canvas in stock yet, it is held up by the Covid delays in shipping into Los Angeles. So I made an appointment for mid April to take the car down and have them install it, and also do most of the interior, get a new windshield installed and paint the dash and other parts of the interior. So maybe it will be my daily driver by next August.

In the mean time, I am trying to get everything else done by next April. The welding hasn't started yet. Since I'm not as agile as I used to be I find it hard to weld in contorted positions. So one thing I needed to do was order a new welding hood that was not always in the way. I bought a Miller Weld Mask, and it will be a couple weeks until it is ready to use. The mask comes with a frame for prescription lenses (regular glasses don't fit inside the goggles), but my optometrist (Costco) said they could not fit lenses in the frame, so I am looking for another optometrist. It shouldn't be this hard...

I have been working on electricals. 60 years of neglect adds up to a lot of electrical problems. Most are easy to fix (for some reason most of the bullet connectors are bent out of shape, but they are easy to fix). Some of the problems take a bit of problem solving. Yesterday's task was to get Jules' LED lights installed in the front turn signals. The front turn signal lights are something of a rare item, made one year only. They are SWF K12627 lights with a wedge base. I could not find any for sale at any price, so pure unobtainium.

The right light had a weak spring (probably broken in half) in the socket (causing intermittent contact), and the sockets are not removable from the body of the light, they are part of the assembly. Removing the insulator disks with the bullet connector and spring would require machining the end off of the socket (where it was bent or swaged around the disk), and then coming up with a new way to hold the rear insulator in place (e.g. threading for a flanged nut, or pressing on a clip).

I played around with some solutions, but finally came up with a low tech solution: insert a new spring into the assembly, leaving the old one in place. This is how it worked out:

A good spring collection is invaluable. The small spring on the right looked to be a good fit. I could have used one slightly stronger, but the length was perfect. 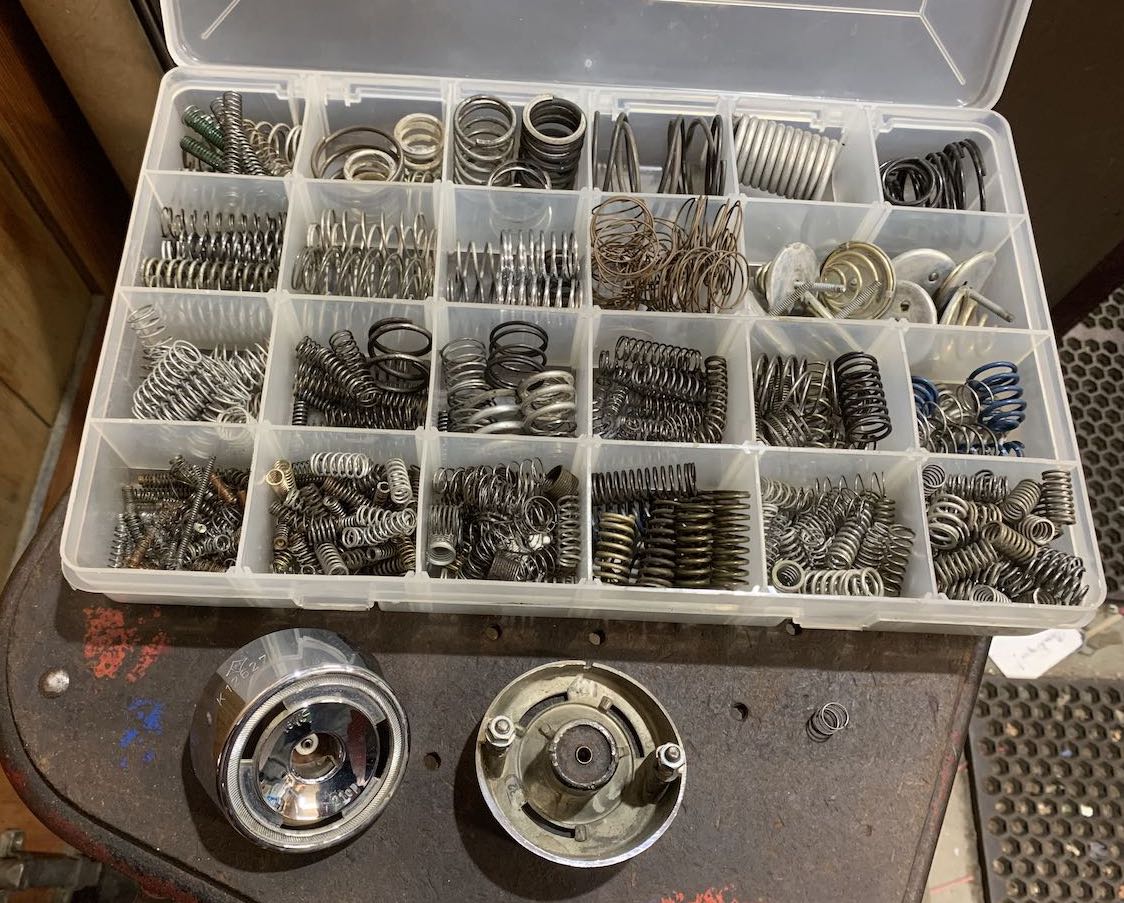 First drilling was to start the hole, using a #70 drill: 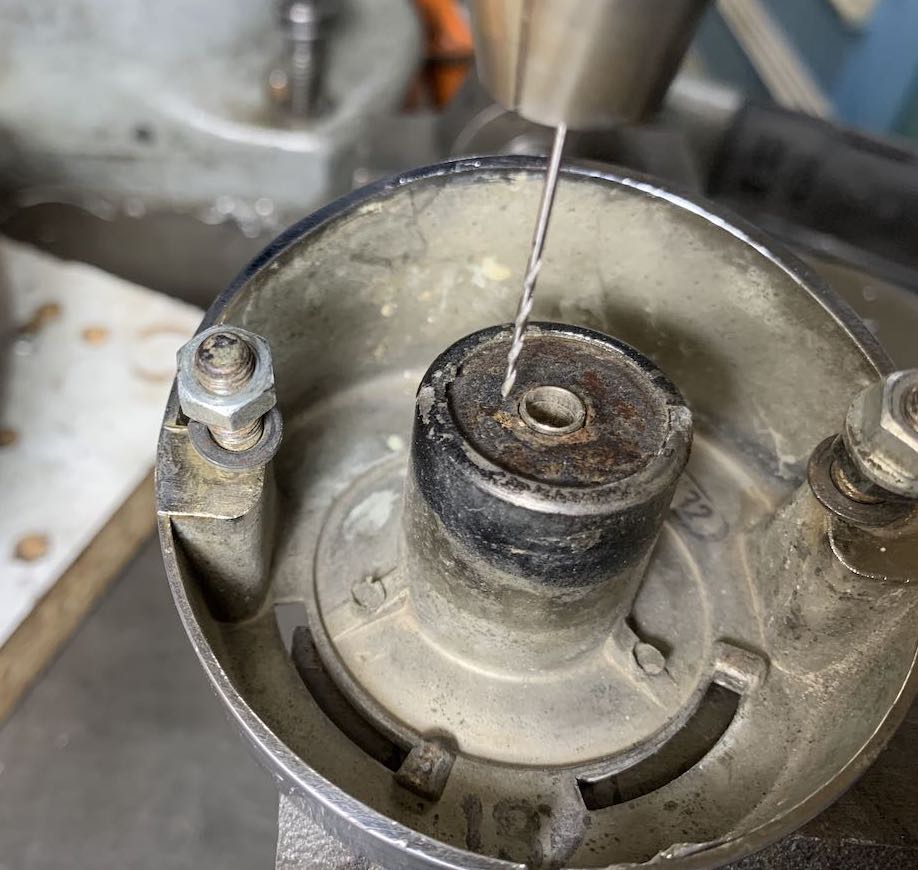 The hole was drilled at an angle to make insertion of the spring easier: 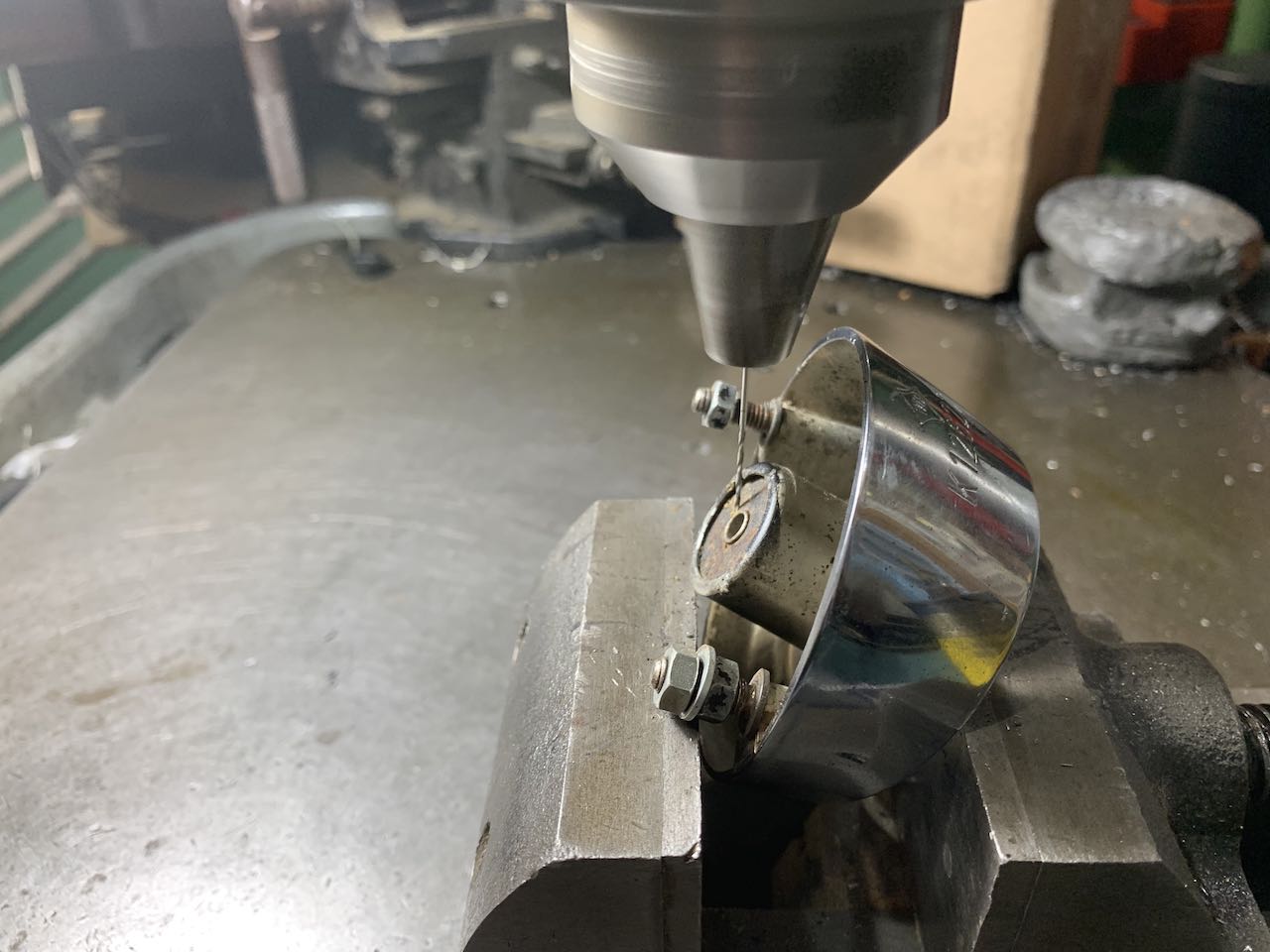 The spring was not hard to get started: 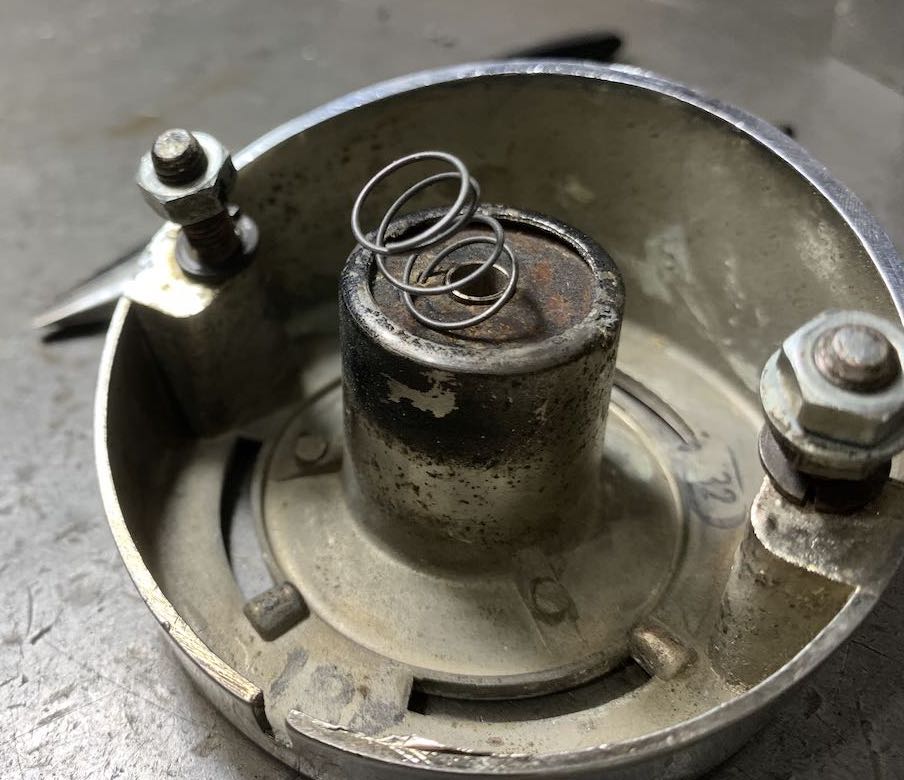 The last bit of the spring was not hard to push in: 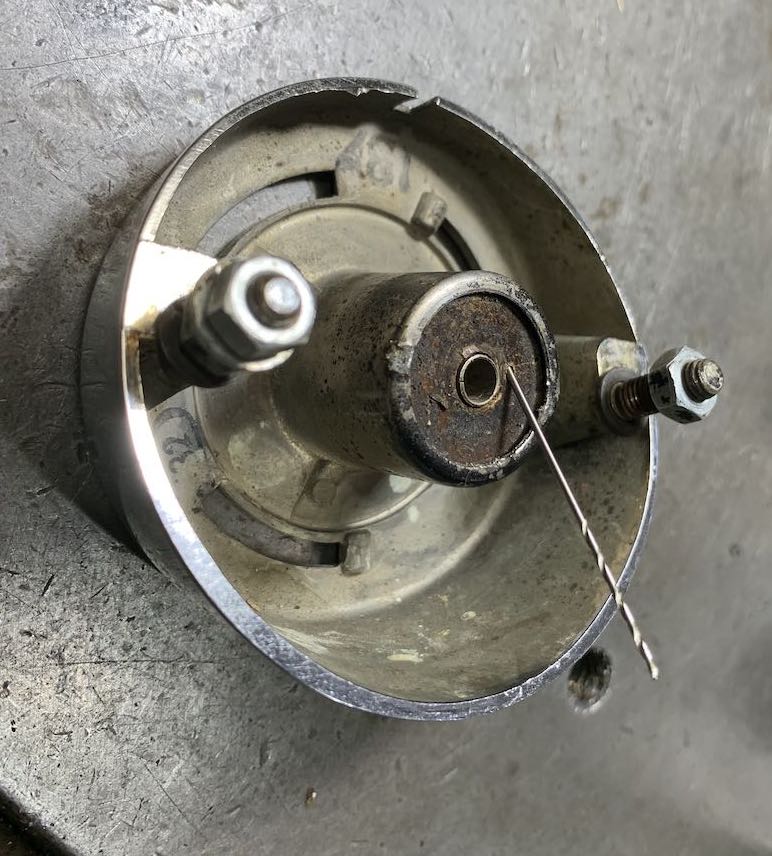 Now the socket has a nice spring action.
Top

Thanks Richard, gotta keep these old girls running, no matter what it takes!
Top

There is a simple solution to problems of this sort which is to machine a collar and JB Weld it on.
Top

Harlan Halsey wrote: ↑
Fri Nov 05, 2021 2:58 am
There is a simple solution to problems of this sort which is to machine a collar and JB Weld it on.

Good idea. But instead of jb weld I would use some loctite 680.
Top

The battery box floor is in, not pretty, but the welds are strong. The new TIG welder is a Miller 161STL, which is a nice portable small welder, but welding 18ga. sheet metal was a new experience

. My welds got better as I went along, the drivers side came out pretty well, but I still haven't got the spot welding down.

I also installed the tow hook. I found it pretty easy to rivet by using the floor jack with a hunk of steel pressed up against the bottom of the rivets, then used an Eastwood rivet set with an air hammer. 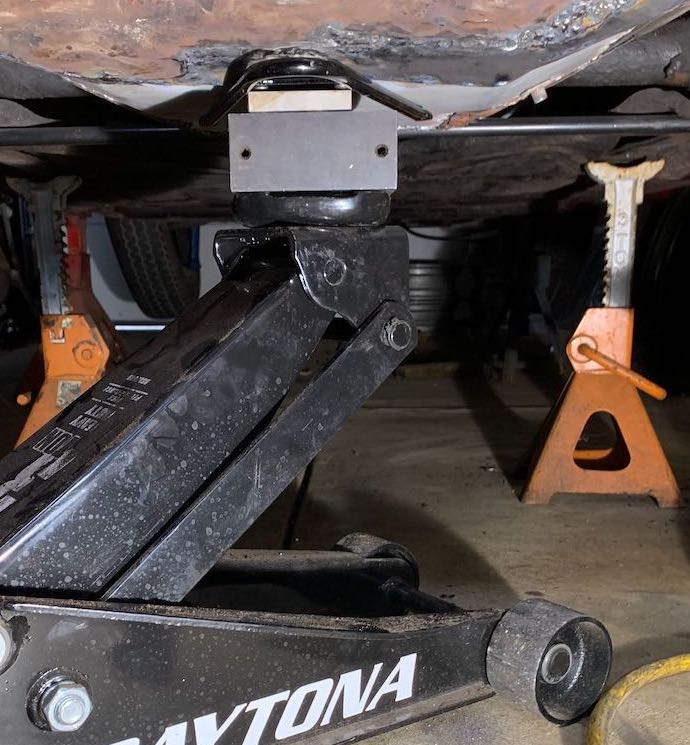 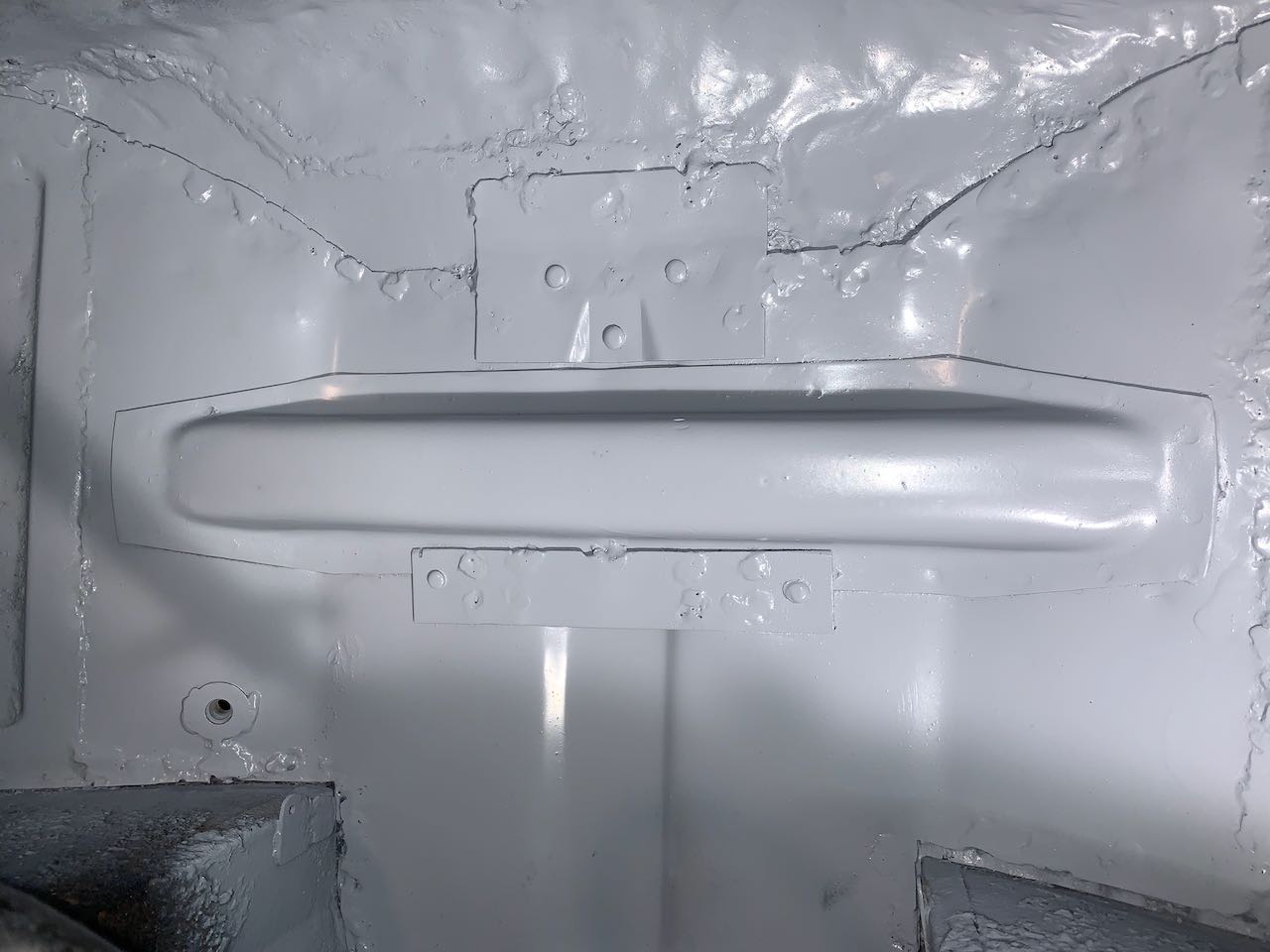 Next step in the battery box will be seam sealer and rubberized bed liner paint, but before that I have some additional welding to do, and I want to get the inside of the trunk cleaned and primed so I can do it all at once.
Top

The front hood had been "gas station attendized" as the Maestro used to say. And then repaired by the Fresno body shop that is one step down from Earl Scheib. So this is what the right side of the hood frame looked like: 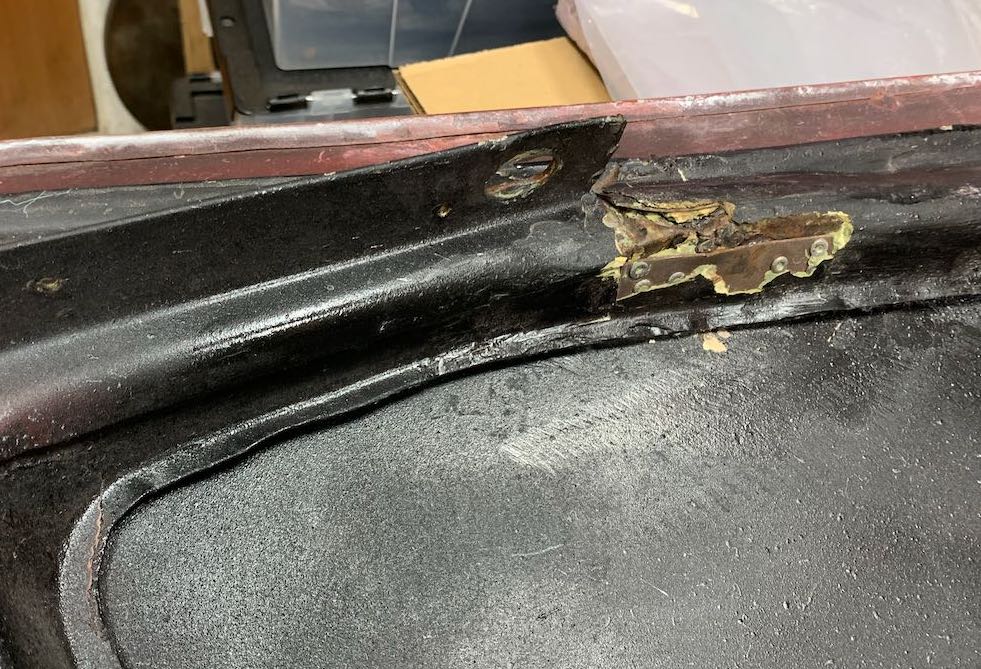 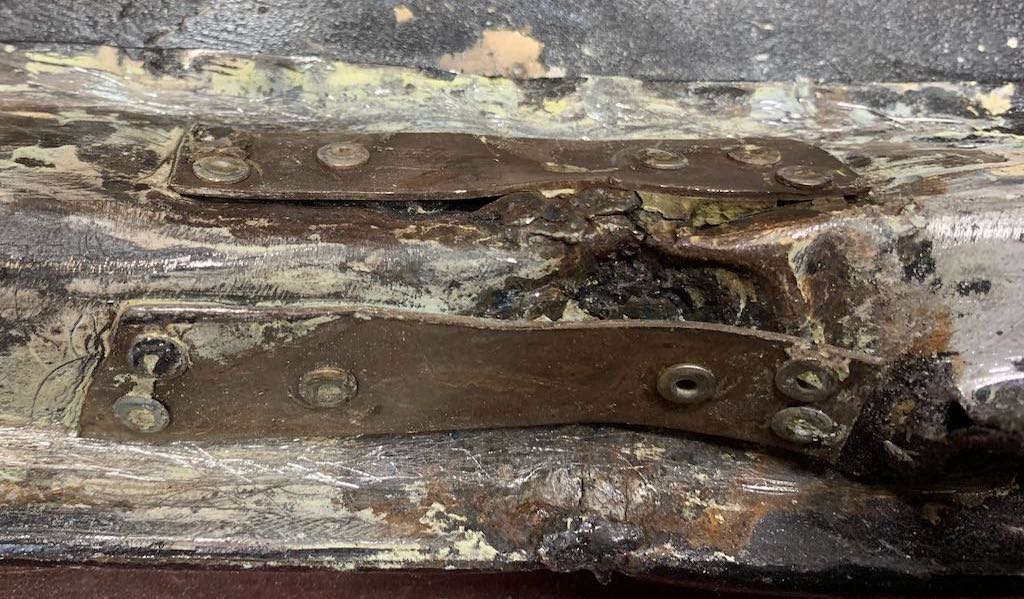 So after removing the pop riveted plates I TIG welded the holes and the cracks, then welded some 15ga. strengtheners on each side: 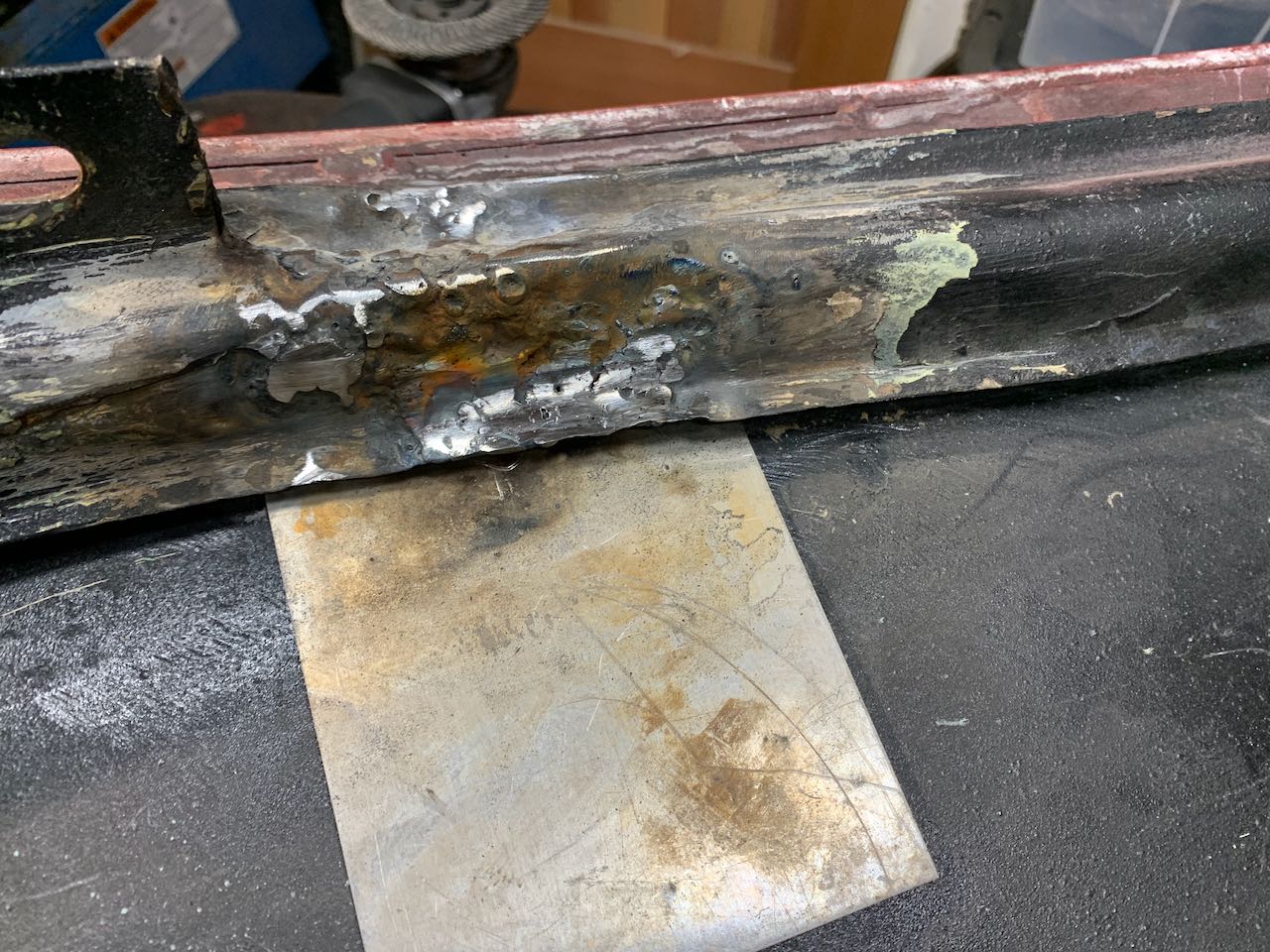 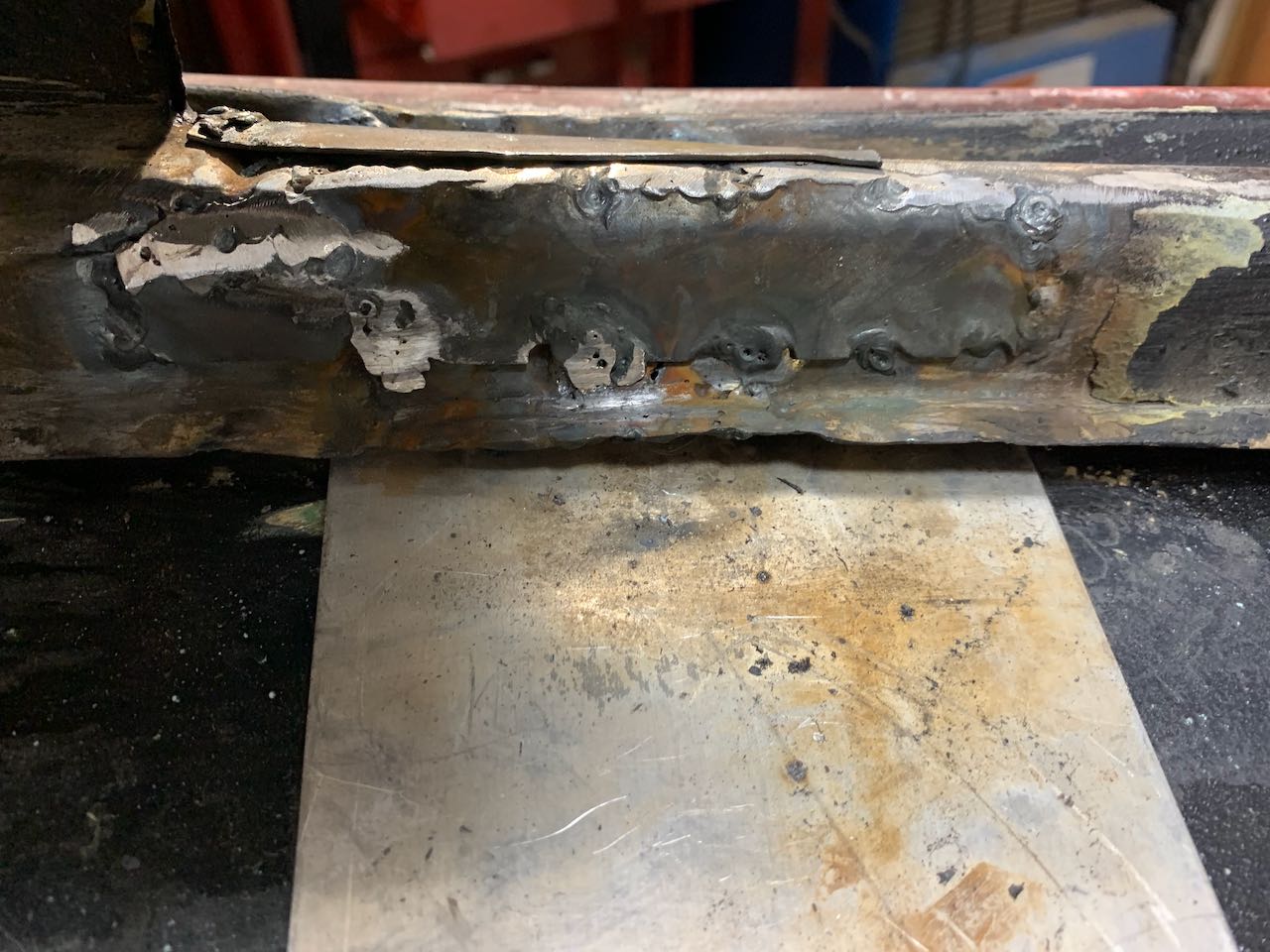 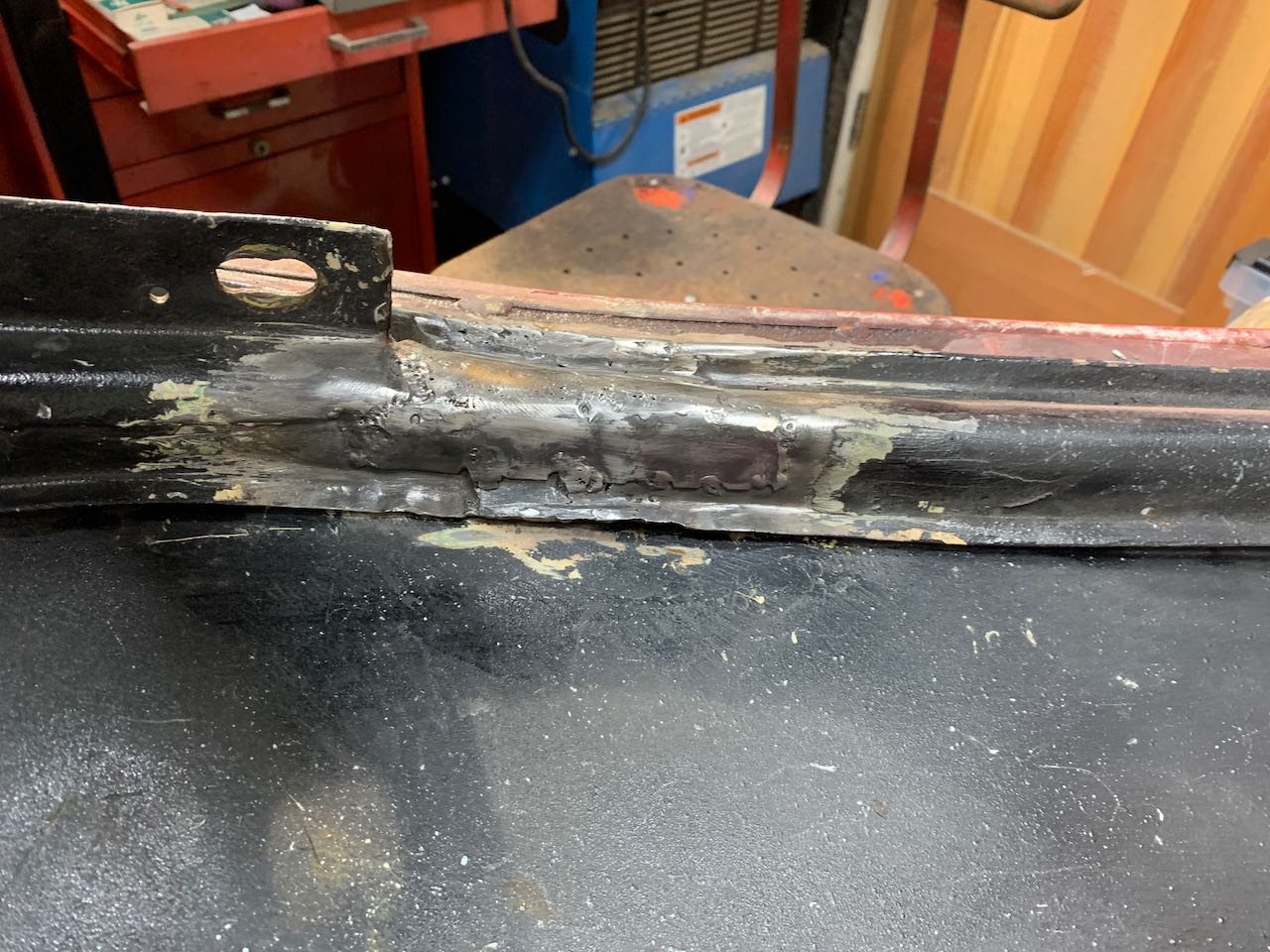 After some filler and primer it looks presentable: 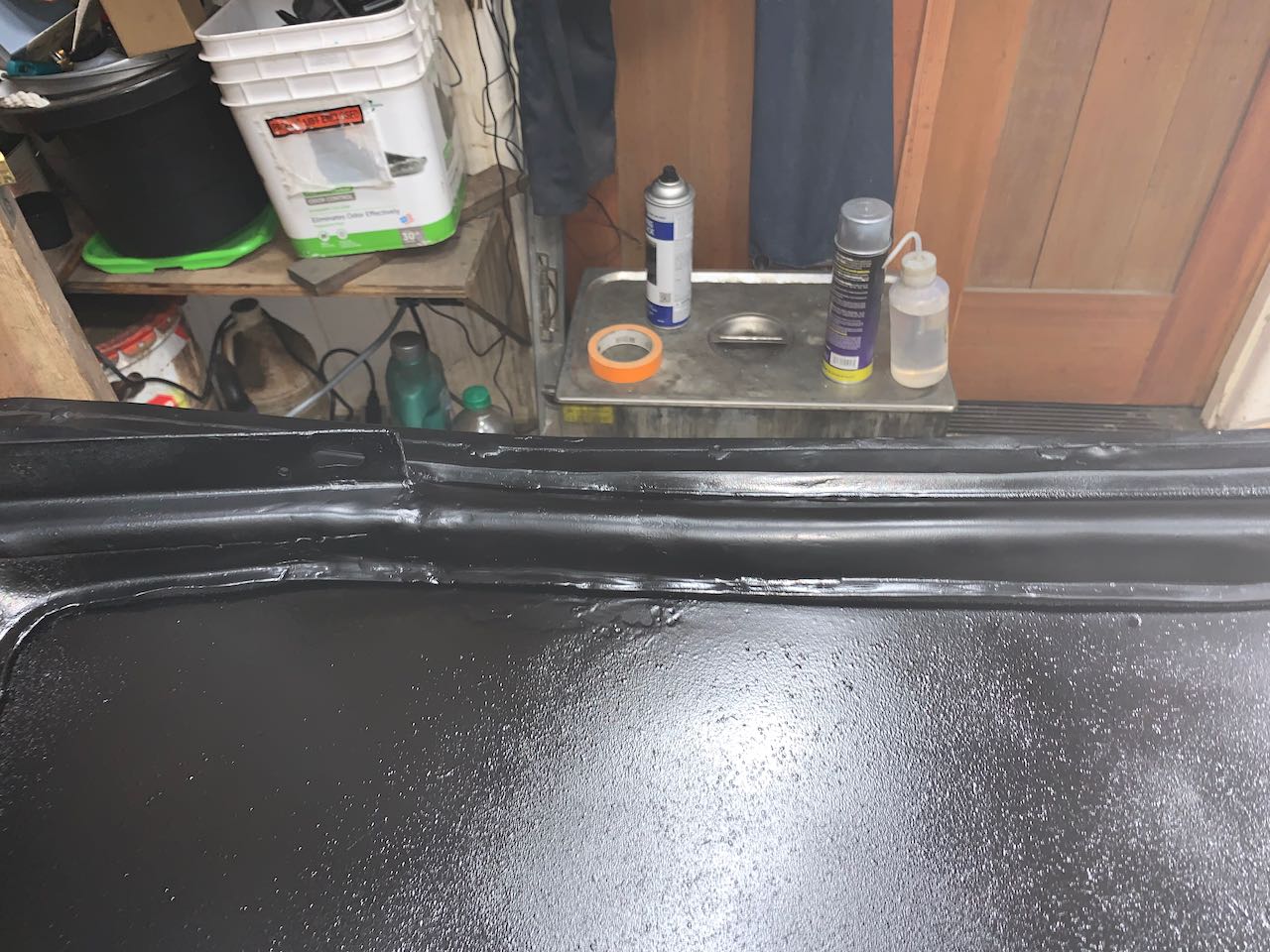 The headlight buckets were the next project. More body shop turkey repair work. The conduit was not welded to the headlight buckets, instead there was about an inch of putty, and they had cut strips in the back of each bucket for some unknown reason. The bucket on the right side had some big globs of brazing that needed to be removed.

The fender brackets were in pretty bad shape, so new brackets with conduit were installed. I haven't welded the buckets to the conduit yet - first I need to make some small sheetmetal pieces to fill the gaps and do some cleanup. 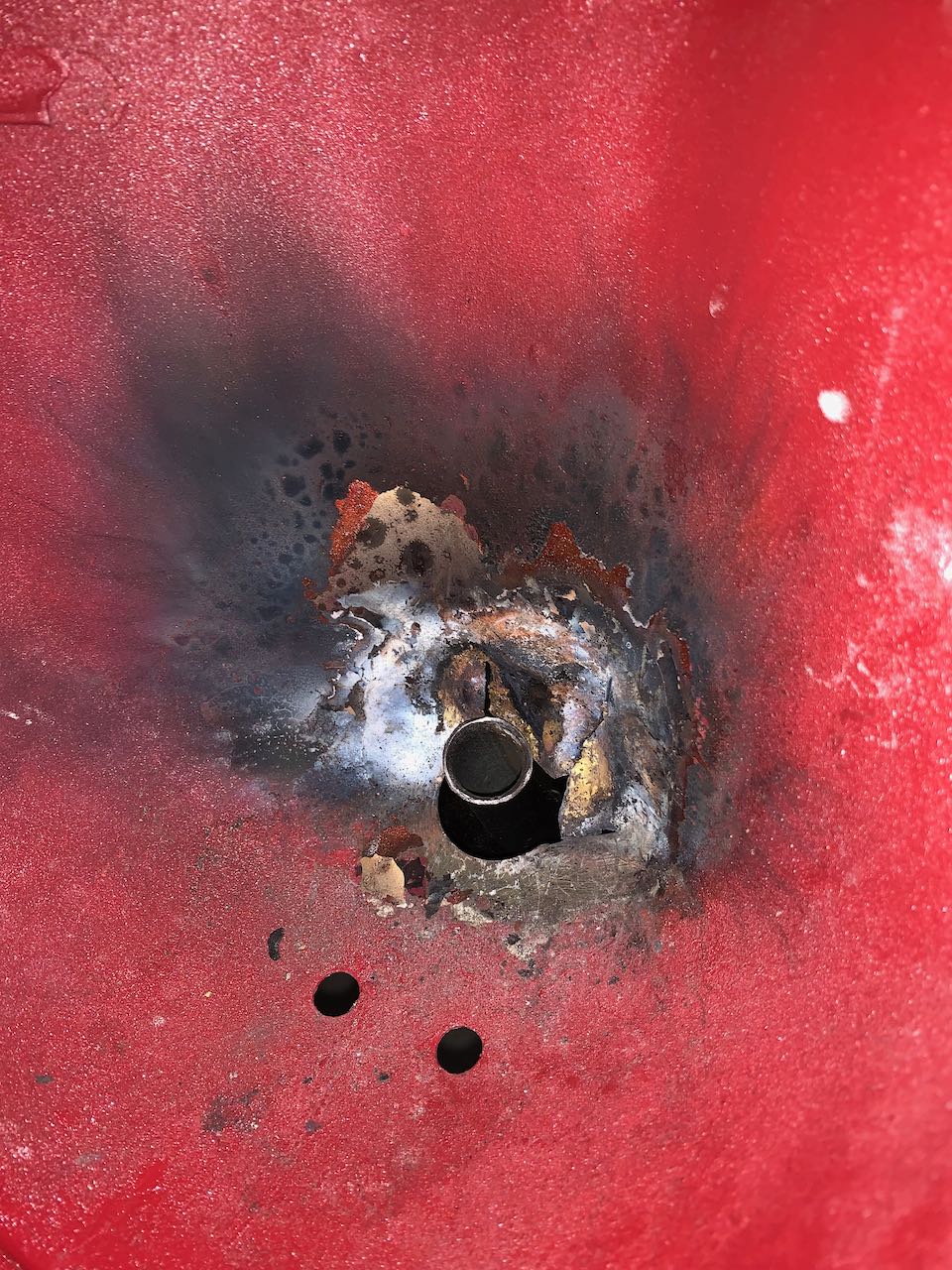 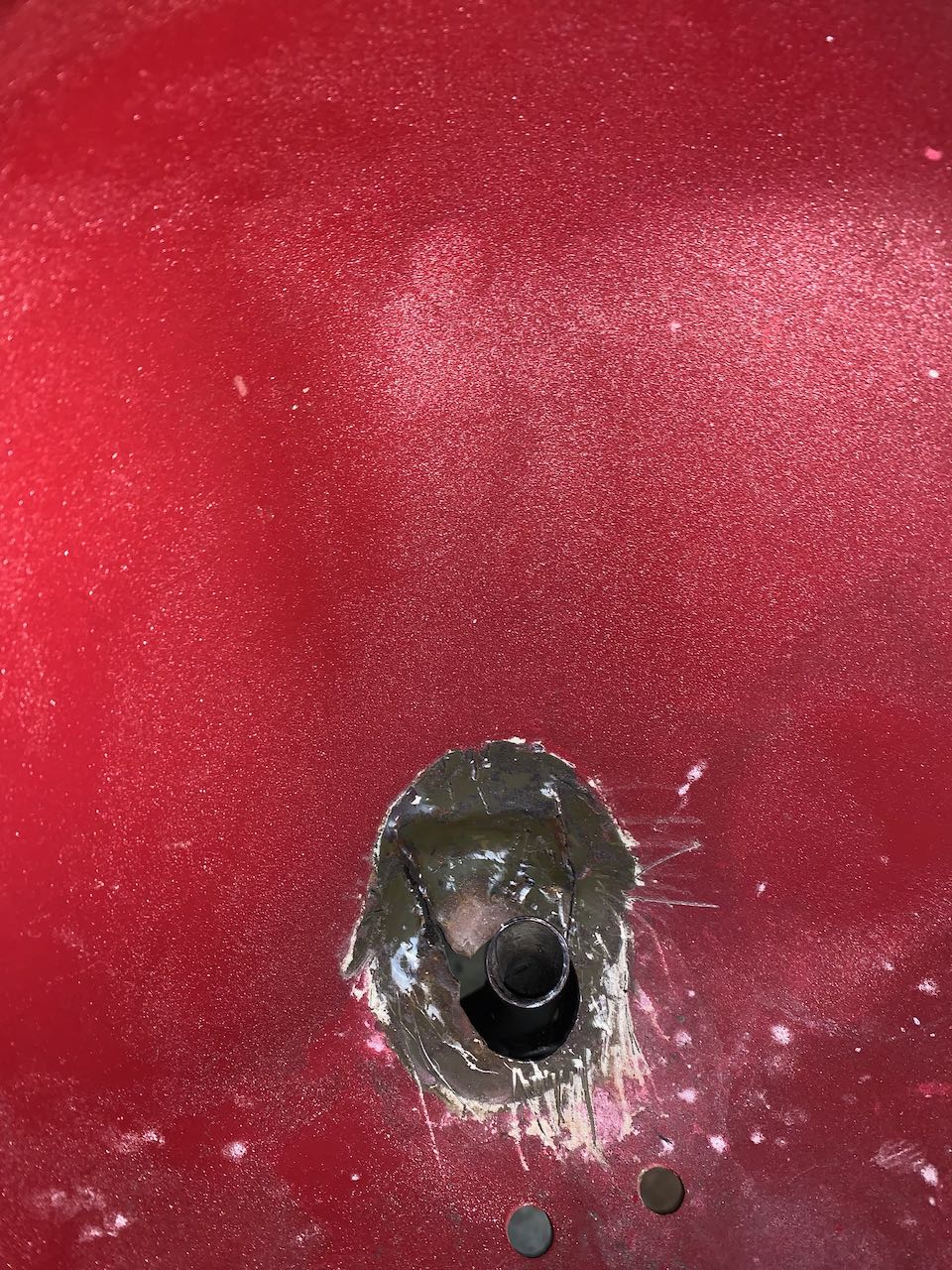 After reviewing your posts, I would certainly be wary of any 356 from Mohr Imports.
Congratulations on saving it properly.
Top
Post Reply
48 posts