In 2 weeks I will be off to Gothenburg to collect the 356 I bought from David in NC.

The car will be prepared for rallying, next year I hope to do a couple rallies in the French/Italian alps... (edit: 4 years later I think I am going to be happy if I actually get some miles on it this year.. big plans but not enough guts? )

My plan is to buy a set of speedster seats from fibresteel, install lightweight carpets, get some decent rubber on the wheels and install the 57 A engine I have started to rebuild. A leston replica from moto-lita is also on the list.

I think the cage will be cut down to just rear rollbar but I will wait ans see what the local DOT inspectors say about the current installation. 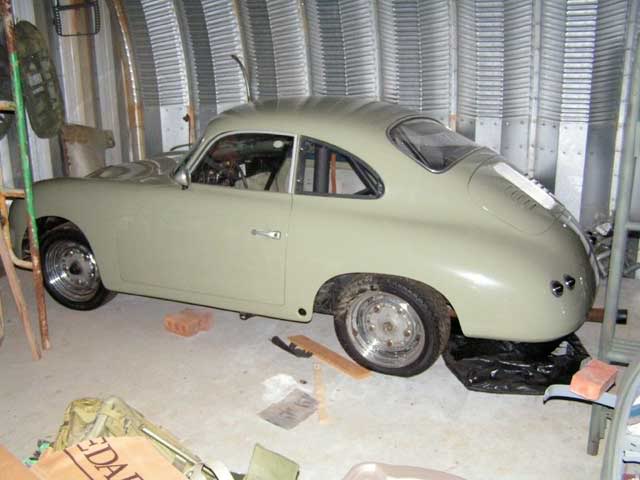 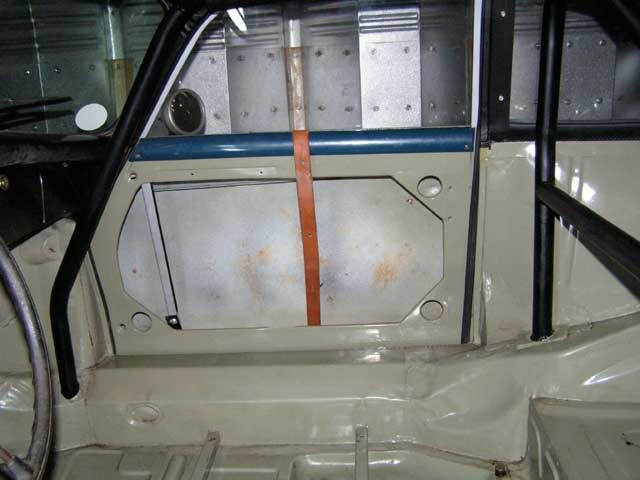 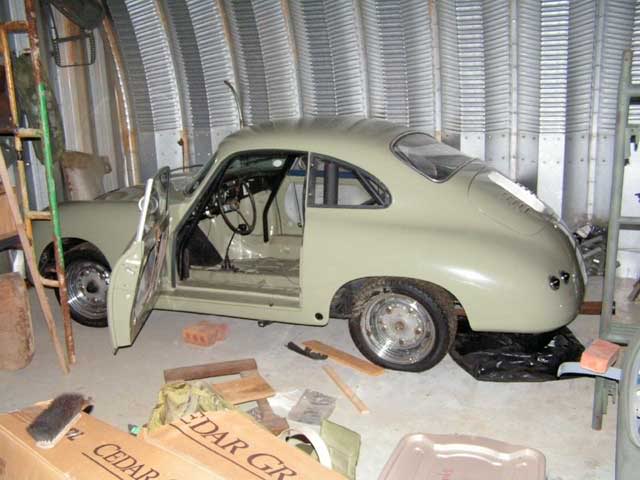 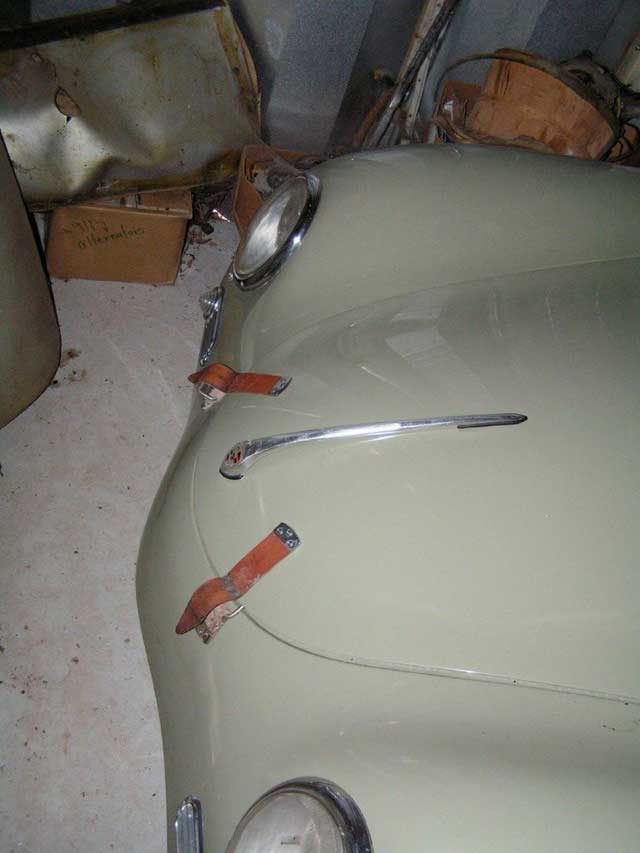 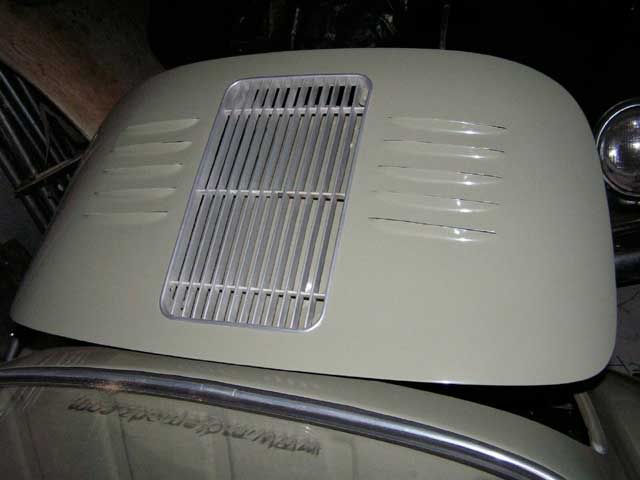 Finally got the old tub home, I know the floors are new but floor perimeter and closing panels etc are stock so it must have lived a pleasant life.

Anyone know this car from before (5xx47) and perhaps an idea whether this olive green (?) ever was a Porsche color? 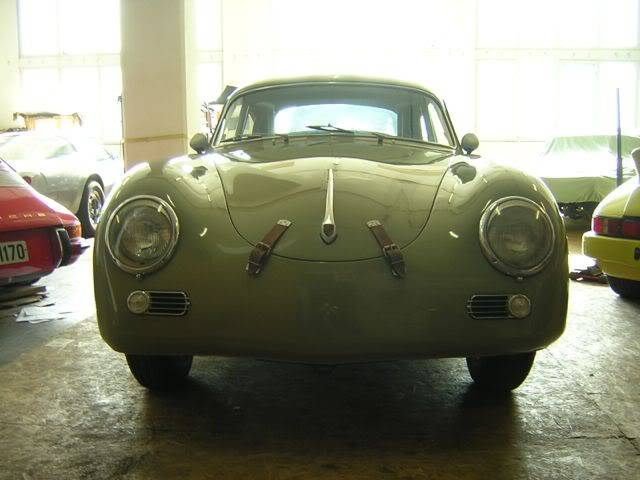 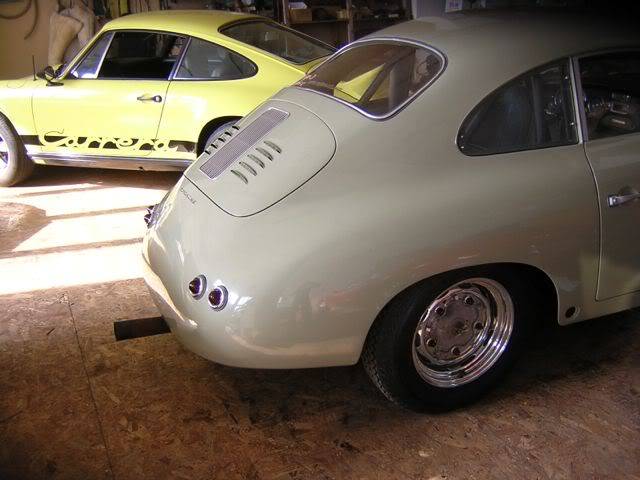 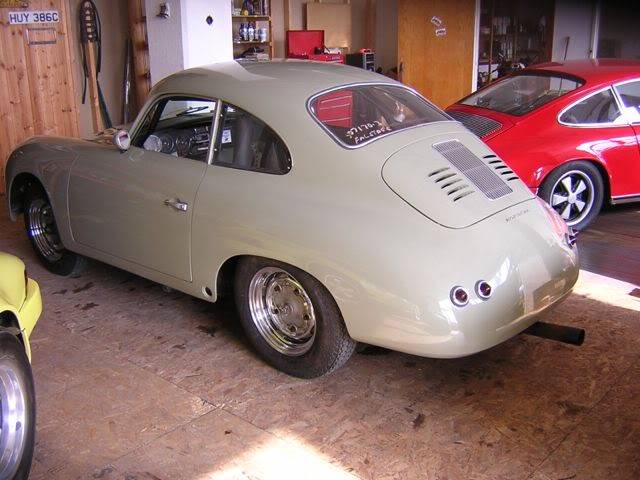 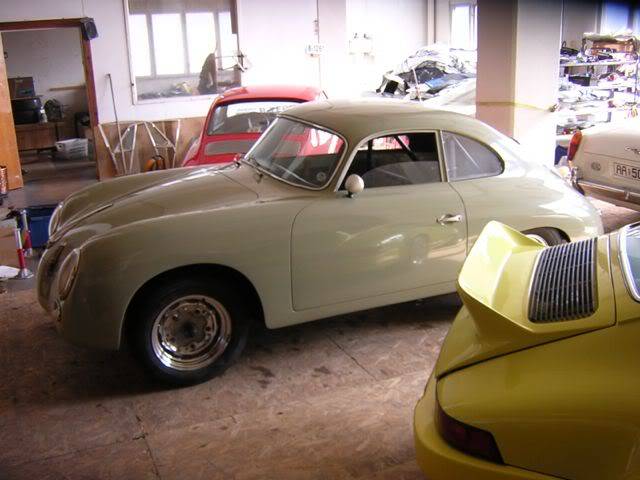 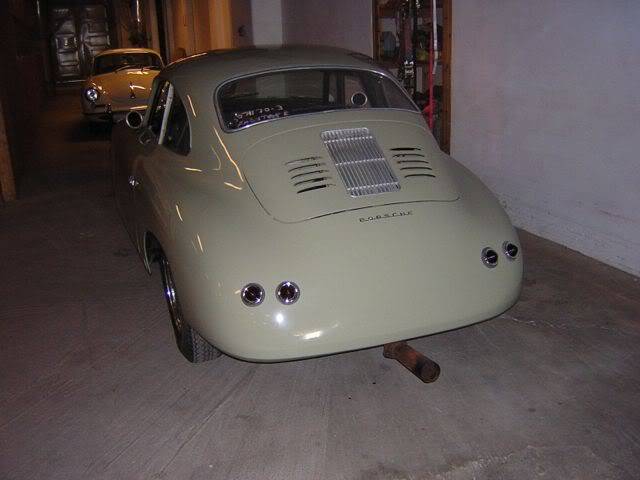 Trond, digital photos rarely show color accurately, but I agree with Cliff that you may have a "Stone Grey" car which was a factory color for the '57 to '59 model years. To my eyes the color is not in any way "grey", it's a pale khaki green. I think it's a great color, uncommon and subtle. I used to own a Convertible D that I had painted that color just because I liked it, not because the car was originally that color.

Does the car still have the paint color plaque present on the drivers side door hinge plate cover, and if so, what is the number on it?

Sounds like you are going to have a fun project!

Thanks, I am not sure on the color, it does have green in it but we (men) are all more or less color blind are we not...

(I wish I had saved one of these small hand scanners that one could afford 20 years ago... roll over and scan)

I do not have the hinge covers, just bought a set off ebay, mine were gone, car is lightened everywhere its possible, the weight of those are minimal though as they are alu. I will get a COA in time and see what it says.
'56A coupe & '63B coupe
Top

I was fixing a minor issue with the Corniche today and realized I had to snap this pic.. 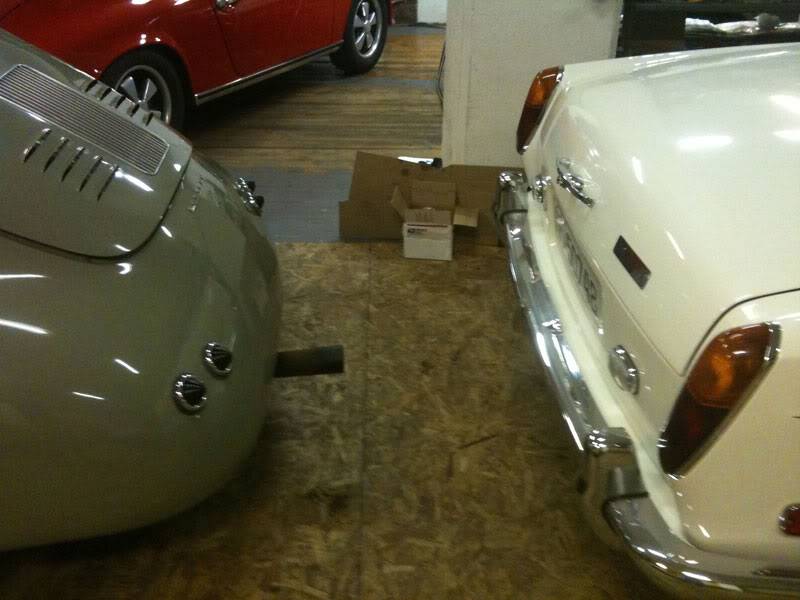 All fired up, old gas may not be the best and tomorrow I will drain it. The Permatune seem to be shot so its runnig std coil setup and the pertronix unit works with either.

Runs well after the circumstances, no mufflers here.
http://www.youtube.com/watch?v=pH7RfZmnJBg

Flamethrower - lousy video though
http://www.youtube.com/watch?v=pPr4HvK1IDQ
'56A coupe & '63B coupe
Top

I finally found time to take down the suspension. Wheel angles were off and I could not get them right with adjustments so a rebuild was necessary.

Brakes must be rebuilt, hope that cleaning, honing and new seals will do the job. The brake fluid was actually clean (and blue..).

In the front the kingpin's were shot. Everything was really greasy, I noticed that I had 10 spacers for each linkpin and that was good, they were not equally distributed though.. seems like the camber trick was implemented.

In the rear I found the donuts to be in a bad condition but I do have the soft weltmeister donuts that will go in there.

A few problems arose, two of the bolts securing the torsion bar cover broke, spent one hour to bore, clean, bore and one thread hole came out a little worn. I will have to torque that bolt down before I put things back. Worst case I will install a permacoil.

I put a tape at the old trailing arm angle but will try to lower the car somewhat.

With some luck I can send out the brake backing plates for blasting and powder paint in a day or two. 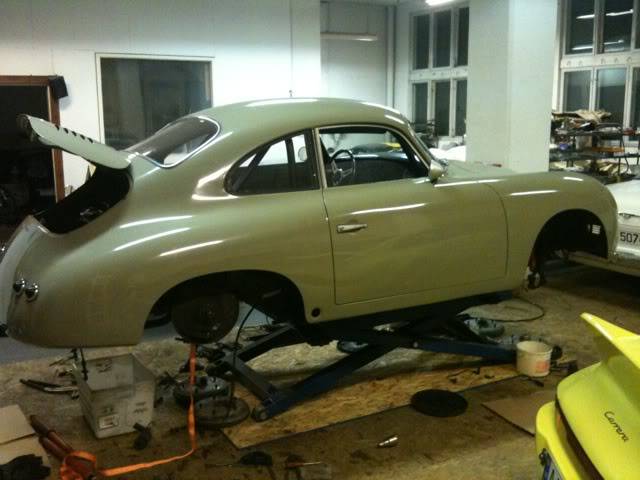 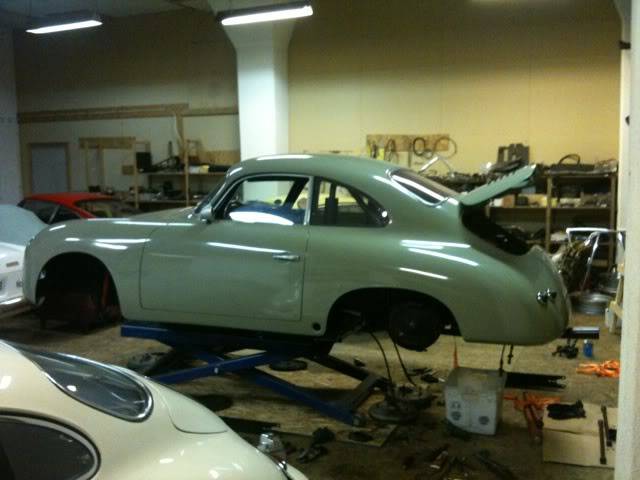 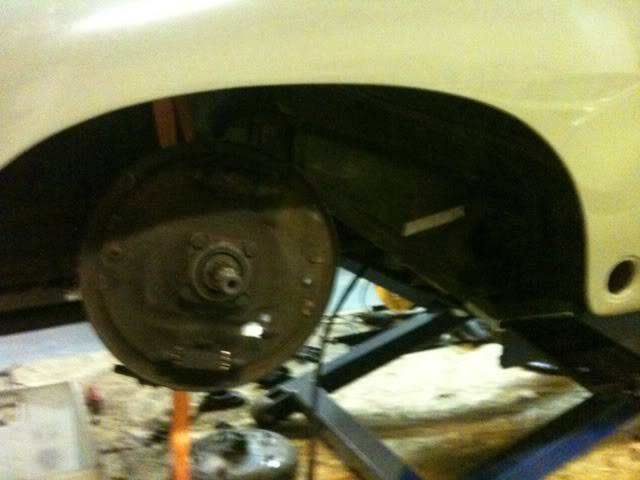 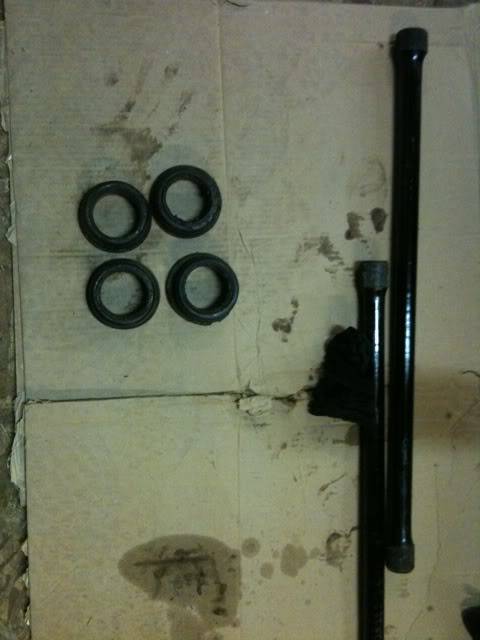 The next "project" is to finish the speedster seats, I got them a couple weeks ago and have been waiting for upholstery from Autos Intl. It seems like I will be getting covers, foams and carpets in a couple days. 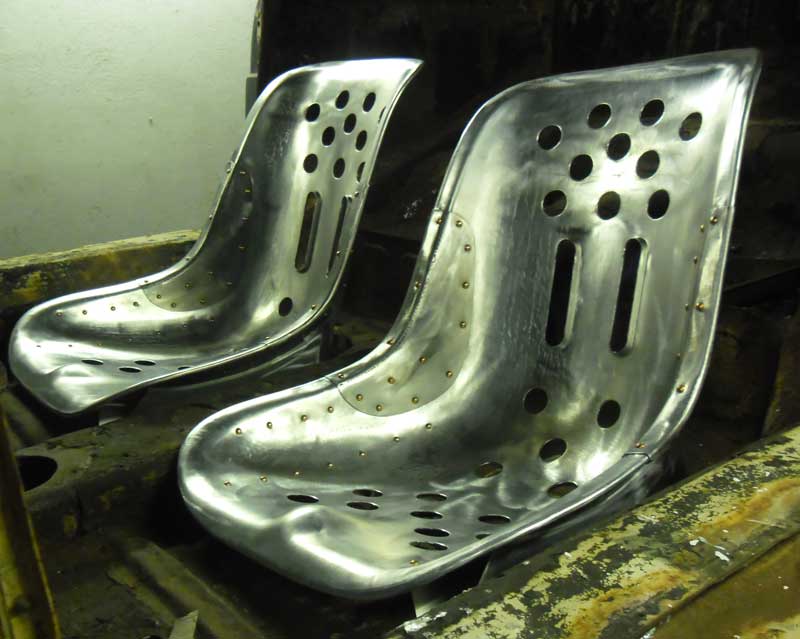 Nice looking A... like the GT touches. Can you tell me about the s?eats? Aluminum? Resource? Bought where ? Thanks Will in N.C.
Top

Car has been under the carcover for a year but now I am back on (a slow) track. Last 12 months have been very busy and cars and reading forums was not on the priority list.

Seats, sorry for the slow response, the seats were made in Netherlands.
http://www.aluwerke.com

Am going to weld in original seat foundation and use the oem brackets, was not happy with the recaro brackets I had modified.

Started filling the restored brake system, a few leaks was discovered and I had to fasten the new brake tubes even harder. I hate brake work, its always messy but now look forward to lending a friend foot for the final bleeding.

Have to look over the electrical system, wrote a few sketches and must start on fuse #1, then work my way from there. Just installed a shine down license/reverse lamp, did not get one with the car and the repro is so-so but will do for a while.

Did install a set of webers but am tempted to tune the zeniths instead, still looking for a sebring style exhaust and heater parts (exchangers and valves).

Next project is to install a TRW steering box and get a 24 mm pitman arm, the rebuilt origina box is still too sloppy.

With some luck I can put plates on the car this spring, not that much work left really. 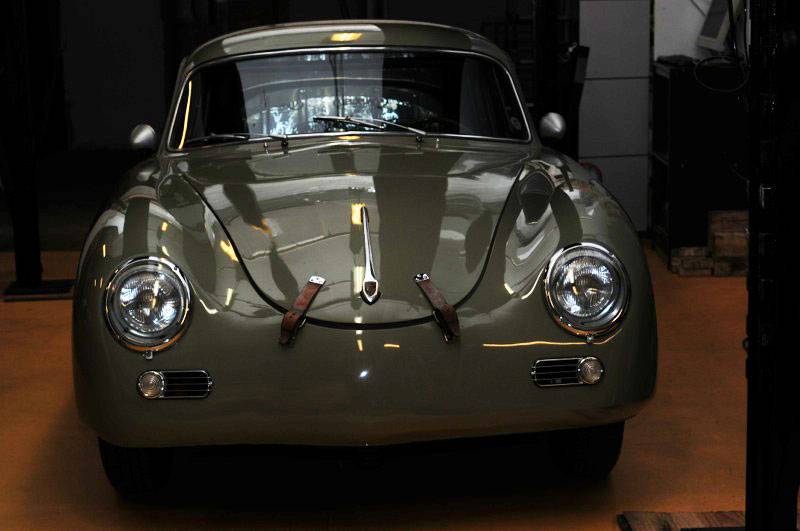 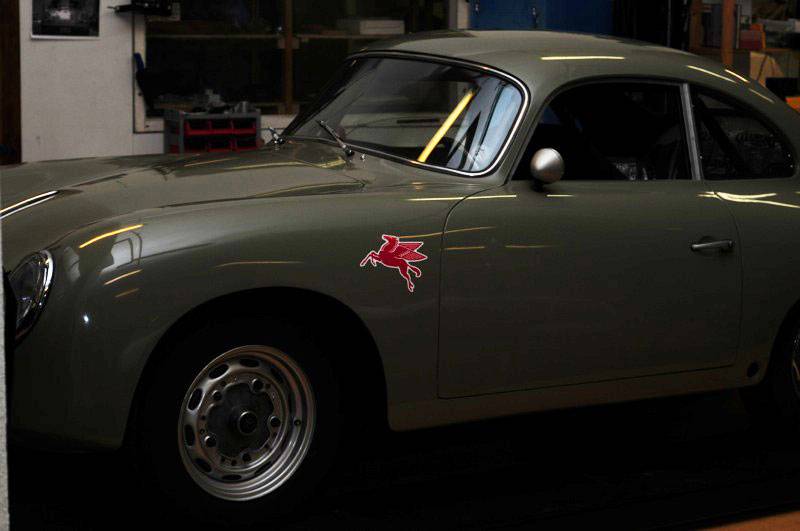 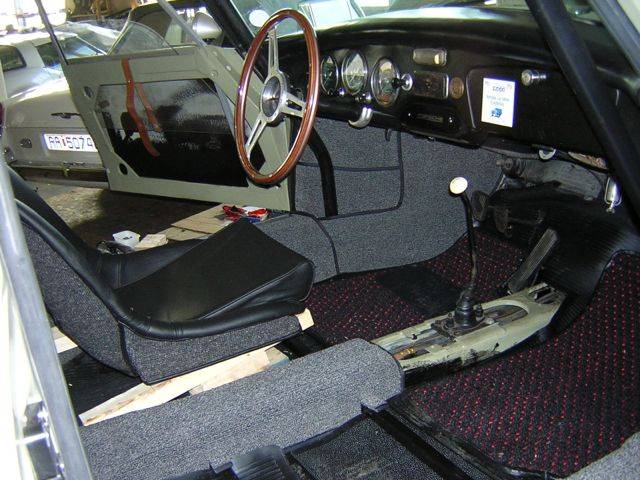 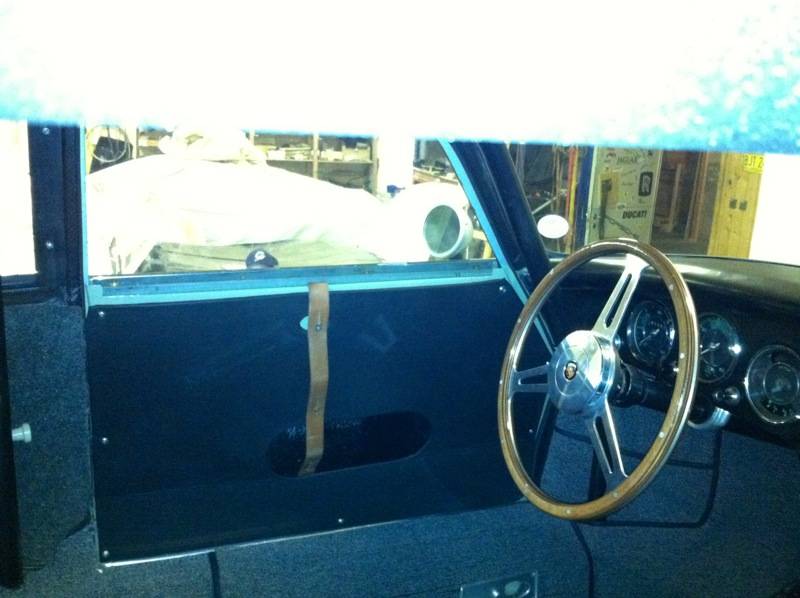 Need to add something to close the doors, either orig 356 or the nylon version sometimes fitted to 911/RS look. I pulled a steelwire from the hole in the mechanism that open the door from inside, made a fuel hose covered loop in the other end. Works ok but the wire will of course not lock from inside and I may use a thin rod instead.
Last edited by Trond Vidar on Mon Apr 08, 2019 7:33 am, edited 1 time in total.
'56A coupe & '63B coupe
Top

Well into year 4, time is limiting my progress. Last few years I have been drawn back to Jaguars as well and am restoring a 1962 E-type. Nuts & bolts on that one.

Anyway, a week ago I loaded the 56 coupe on the 4 post lift and decided to finish it. Finished the interior, started on the exhaust/heating system, rerouted the misplaced tunnel cable/tubes and have started on modifying the linkage for the Redline Webers I installed years ago.

My aftermarket master cylinder was not up to it, it leaked from day one (switch) and I have ordered a better one. Invested in the Mityvac MV6835 Vacuum Brake Bleeding Kit and have started changing brake fluids in all vehicles, it was a relief to use when draining the 56 coupe. I can stand oil but brake fluid is a PIA.

Not the best of pictures but the interior came out nice, Autos International kit on Dutch alu speedster seats. Upholstery job by yours truly. 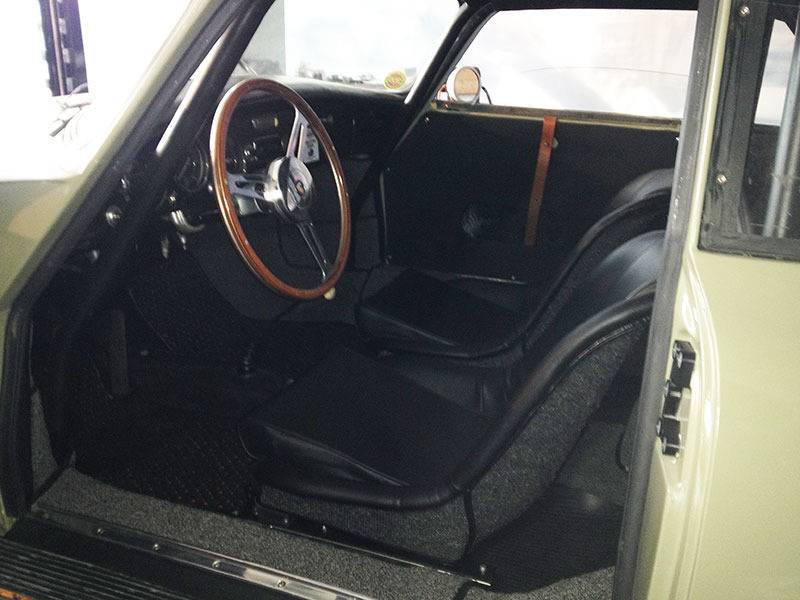 Another year down on the restoration ...

Just got my stainless sport muffler from "concept1" in Canada and push forward to get the car done. Last year new brakelines went in and it is finally tight, brakefluid level is where I left it 12 months ago.

Need some input from the experts.

Looking to put a set of Marchal lights on the car before I finish it, does anyone have a source for quality fiberglass bumpers?
I prefer putting lamps on bumpers.

Second, any opinions on the rebuild/new TRW steering boxes for the 356?
My original is quite tired. I am buying "retro classic" with XAS tire pattern or vredestein classic for the car. Will be running narrow on 165's. 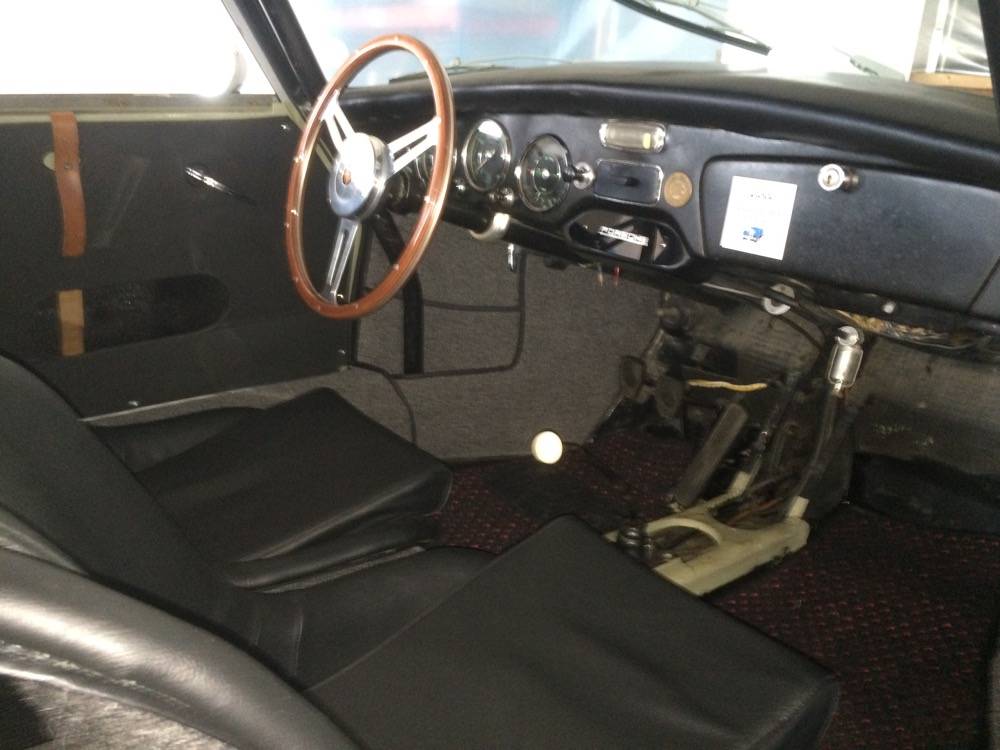 Heater system done, ok it came be from a B model ... 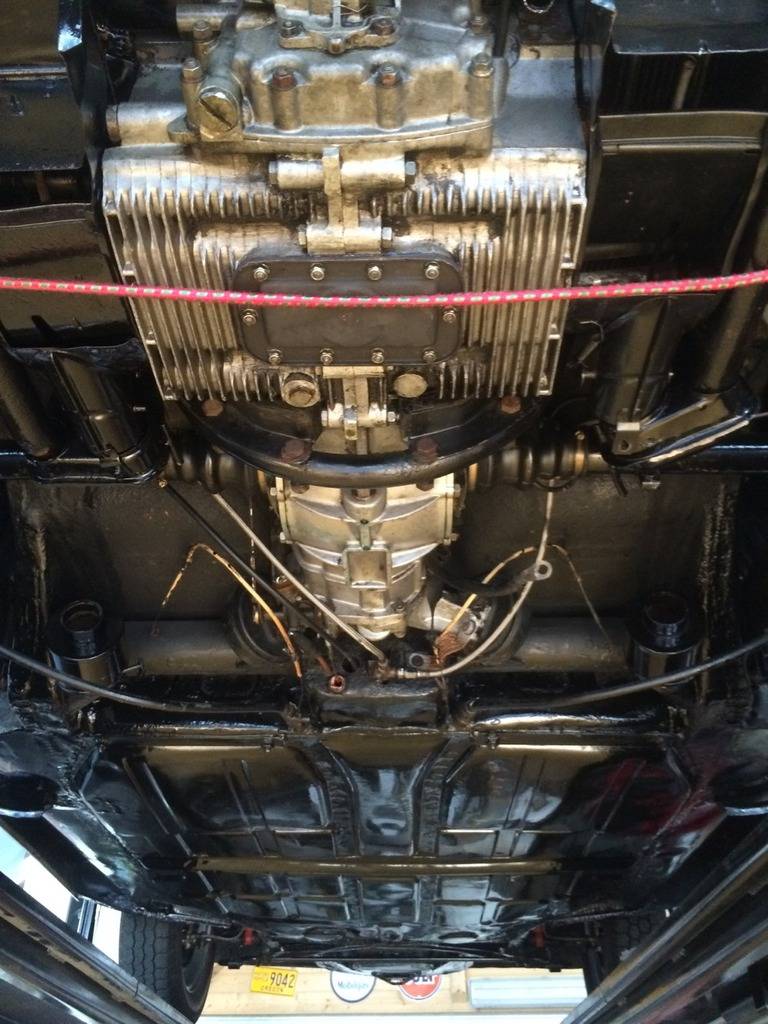 Thanks Phil, hope it is will be on the road late summer.

My 63 coupe did not pass "MOT" due to dripping oil from the transmission sideplates and I decided to practice the job on 56. It has the same dripping since I put Swepco in it. Took it apart, measure the gaskets to 0.30 mm, put a thin layer of Loctite blue silcon on both sides of the gasket and torqued to 16.5 lbs. I could not find a torque spec for them but most 8 mm bolt / 14 mm head seem to be 15-18 lbs and left it in the middle.

The split boots were recent and I reused them (febi/bilstein), the job is easy on the 4 post lift and since car is loaded installing the boots is easy.

Trial fitting the exhaust from Concept, it fit the heads very well but I had to cut out the lower valance. The iphone has been dropped too many times to make great photos but the exhaust looks the business. 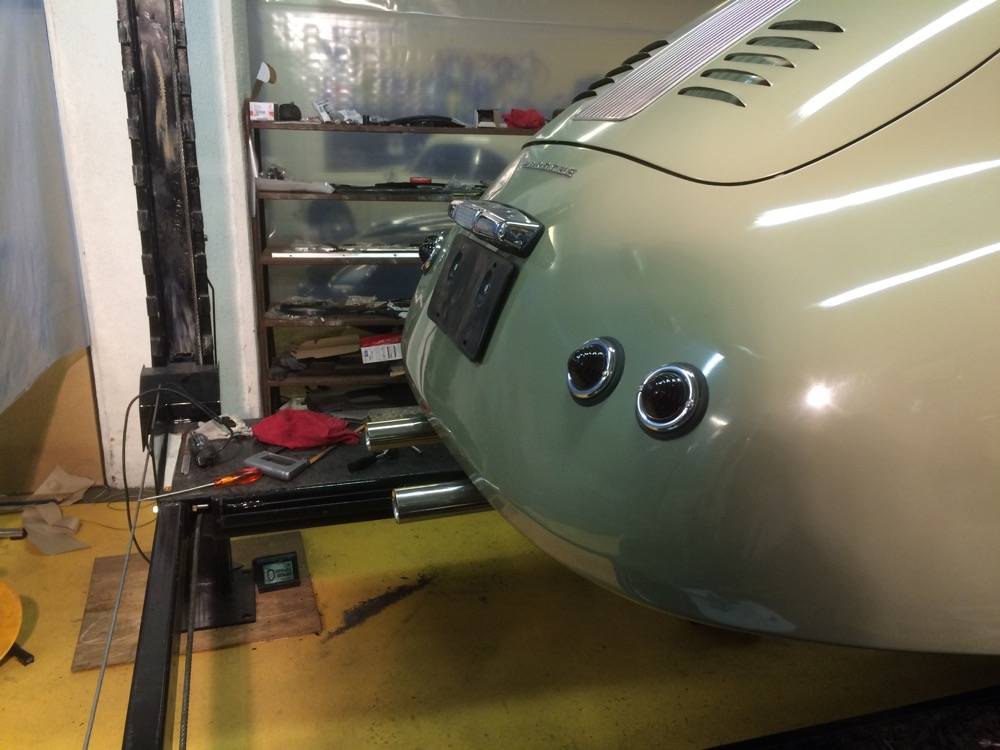 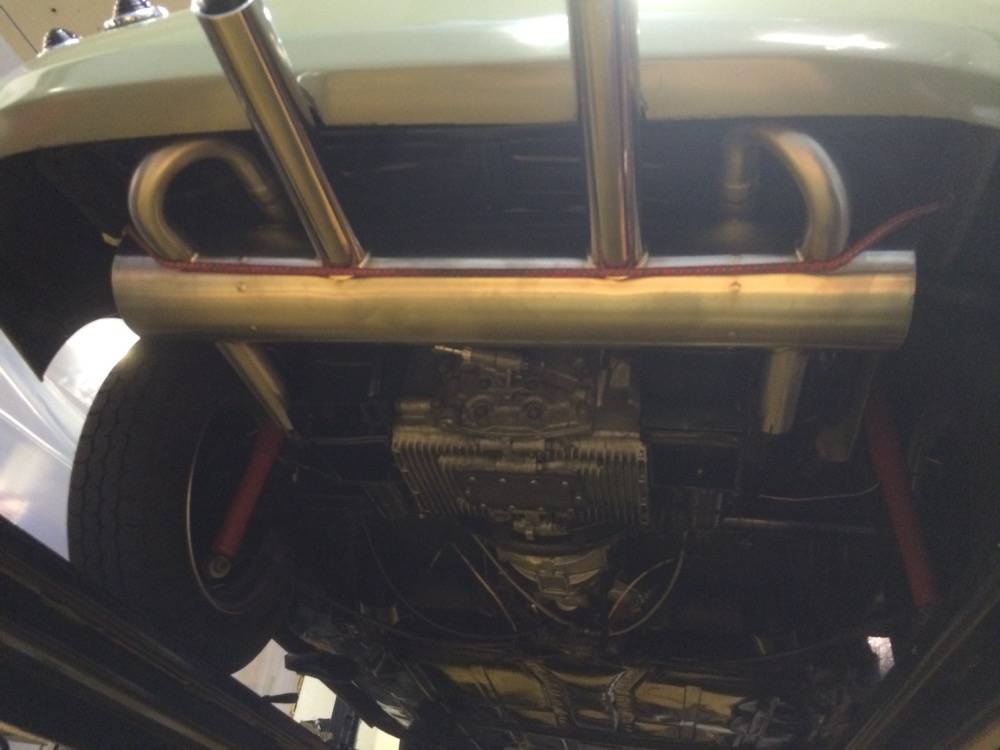