Harlan, I am with you on that reasoning but there are benefits like a modern radio (retro sound), someone can give a jumper cable start, already have all kind of 12 volt led bulbs, spare regulators, Have some 4 or 5 good batteries that fit the size and less stress on components that aided my decision.

I’ll get a 12 volt solenoid for the starter, I do have “power lite” starter in the e-type and a wosp in the 56 coupe but have not checked flywheels. They are not noisy and seem to engage smoothly though.
'56A coupe & '63B coupe
Top

I received the conversion parts yesterday but am going to give 6V another chance. A rebuilt 6V starter has been ordered from a recommended source and I will put the 6V battery on the maintainer until the starter is installed.

The new 12V generator is a repro from Germany(?), the Bosch regulator is from Hungary and the 12V to 6V is "made in China". I also got a new set of Hella H4's and they come from Czech Republic these days. Come to think all the new 911/356 headlamps I have bought last 20 years were from the Czech republic. 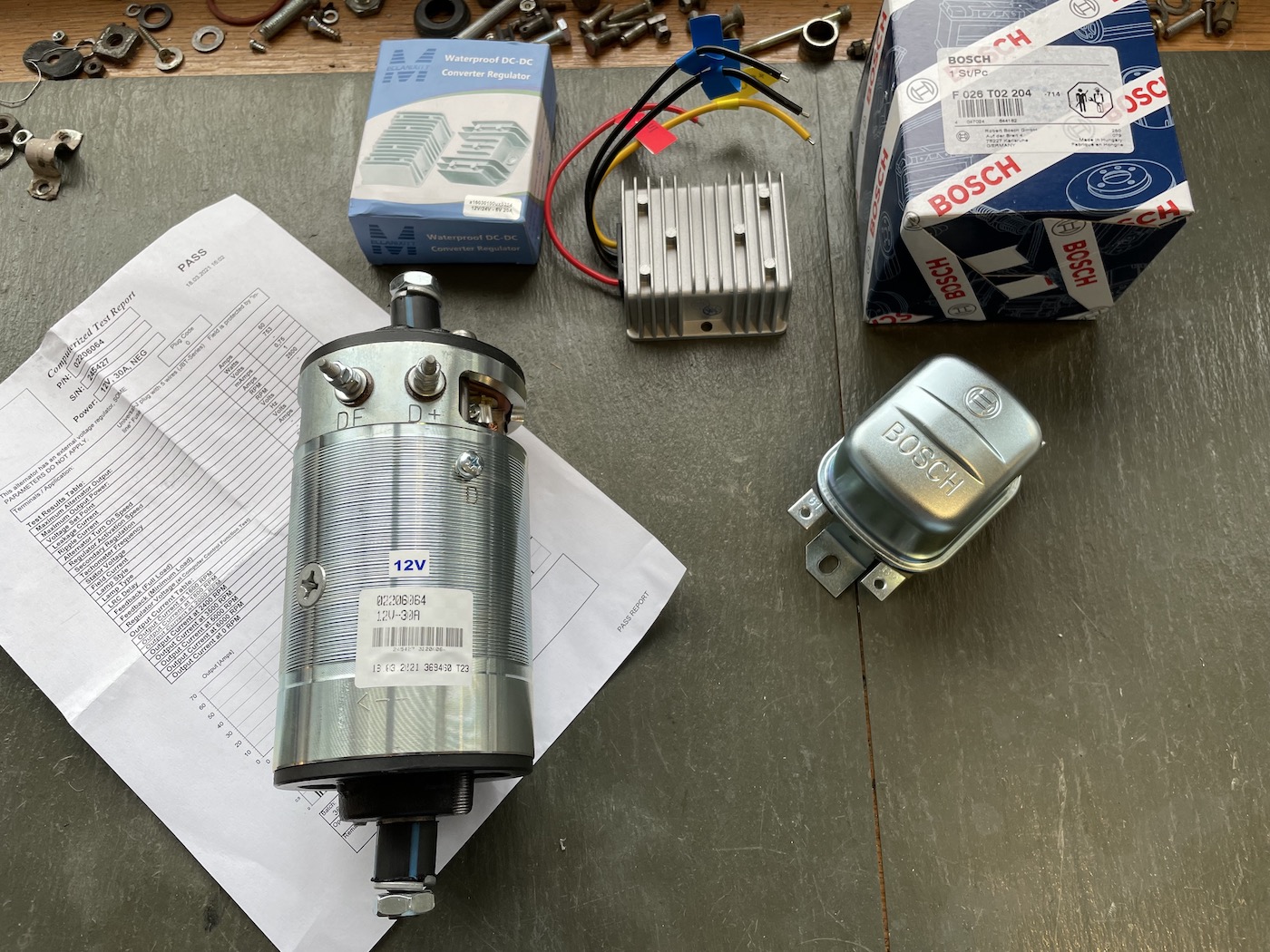 Okay.. lesson learned dont trust your battery, do a proper battery test before proceeding with other parts.
New rebuilt starter did not do nothing, new battery straight off the shelf made the difference.

Its a VW starter I guess but was promised no problem in a T6, was an easy install. 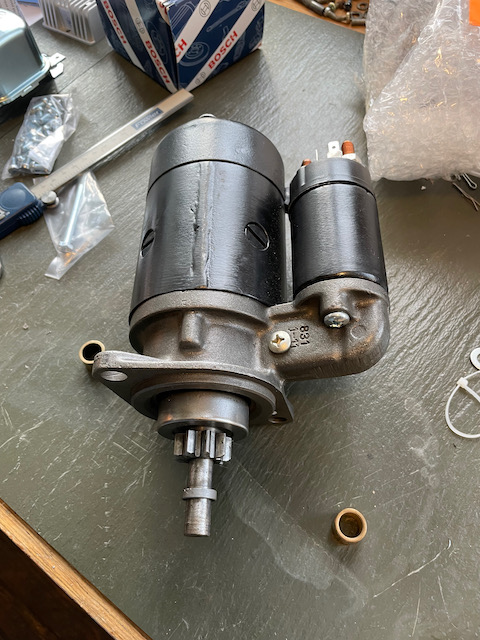 For the reference, old or new starter did not make a difference with the old battery.
Slow cranking with old battery
https://youtu.be/KCpAa7p3XhI

New starter, new battery. Its not a lot of difference but this is a good as it gets.
https://youtu.be/fpctQFI4jtA

Lots of work carried out, cleaned up the engine, fan, fanhouse, oil cooler etc and okay all in all this was kind of good but a new $150 battery alone would have started the car.

For the future, it would be great to find a 6V li-ion on the market, maybe for small engines / appliances or MC, maybe 2 in parallell in a dummy battery box.
I am running a li-ion in my Motorcycle, had it for 3 years no maintenance at all (yuasa 12 style) before that I would trash a gel battery every 2 year.
'56A coupe & '63B coupe
Top

Trond
Thanks for the youtube fix, as the say an image is worth a thousand words.
KTF
John
Top

Runs like a champ with new Hella EURO lamps, 6V glows in the dark. 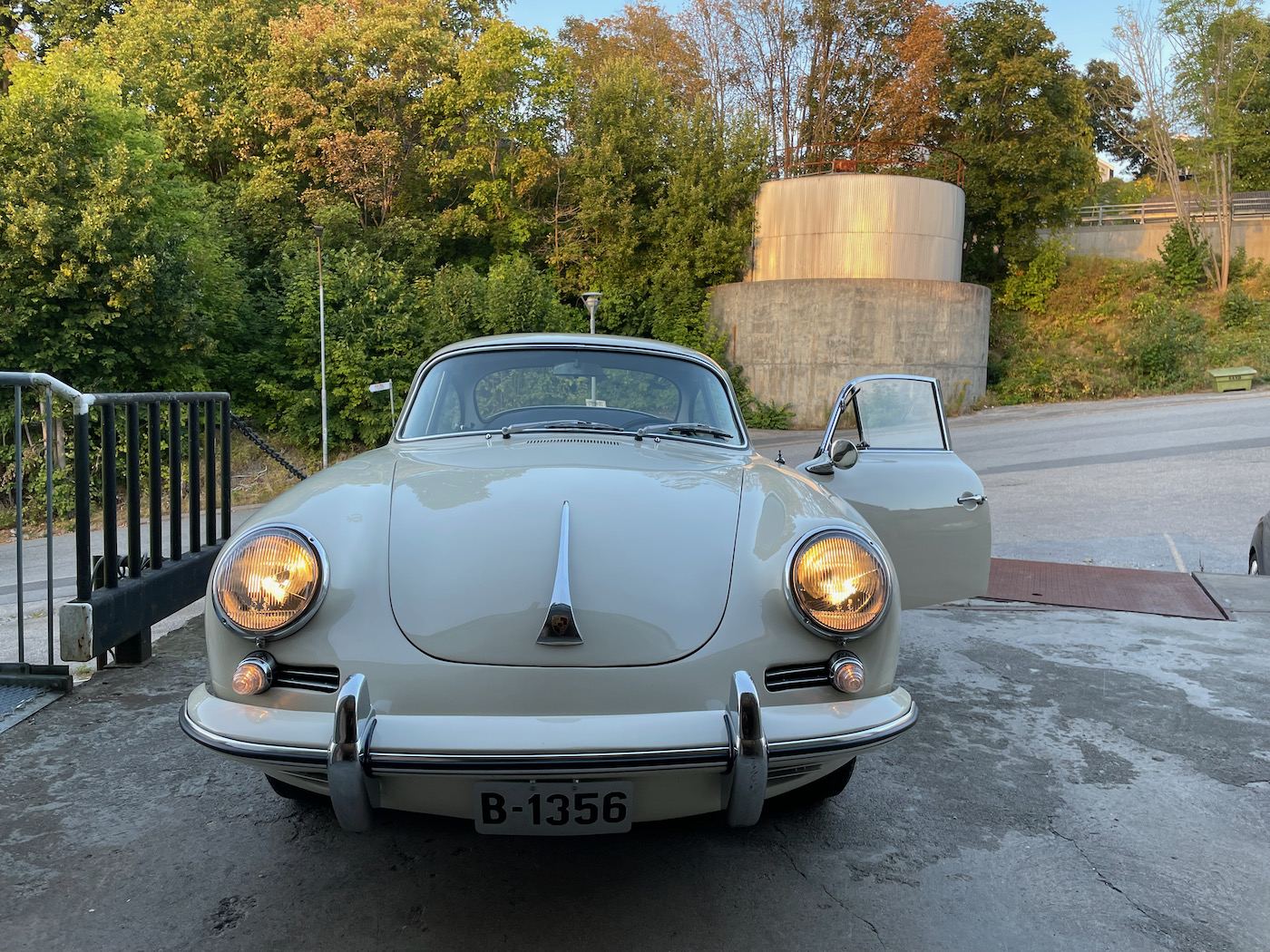 Its been quiet in the garage last fall, too much going on at daytime work but finally,.. Happy new year!

1963 Coupe, Last year the start of the season was lost due to starting issue. This year I will start preparing the car early.
Having analysed the frozen exhaust system, then cut and welded it I decided to rather buy a new one for this year. The old one was rather dented and a little noisy. I decided to replace the pulley seal at the same time. A new Reinz seal I had went in but ended up slightly twisted and I decided to order some Viton seals and a seating tool. The best deal I could find was CSP's tool and that is what I bought.

Someone had been quite liberal with some sort of liquid gasket on the axle but I have cleaned it out and just waiting for the seal to arrive later today before I install a new one. 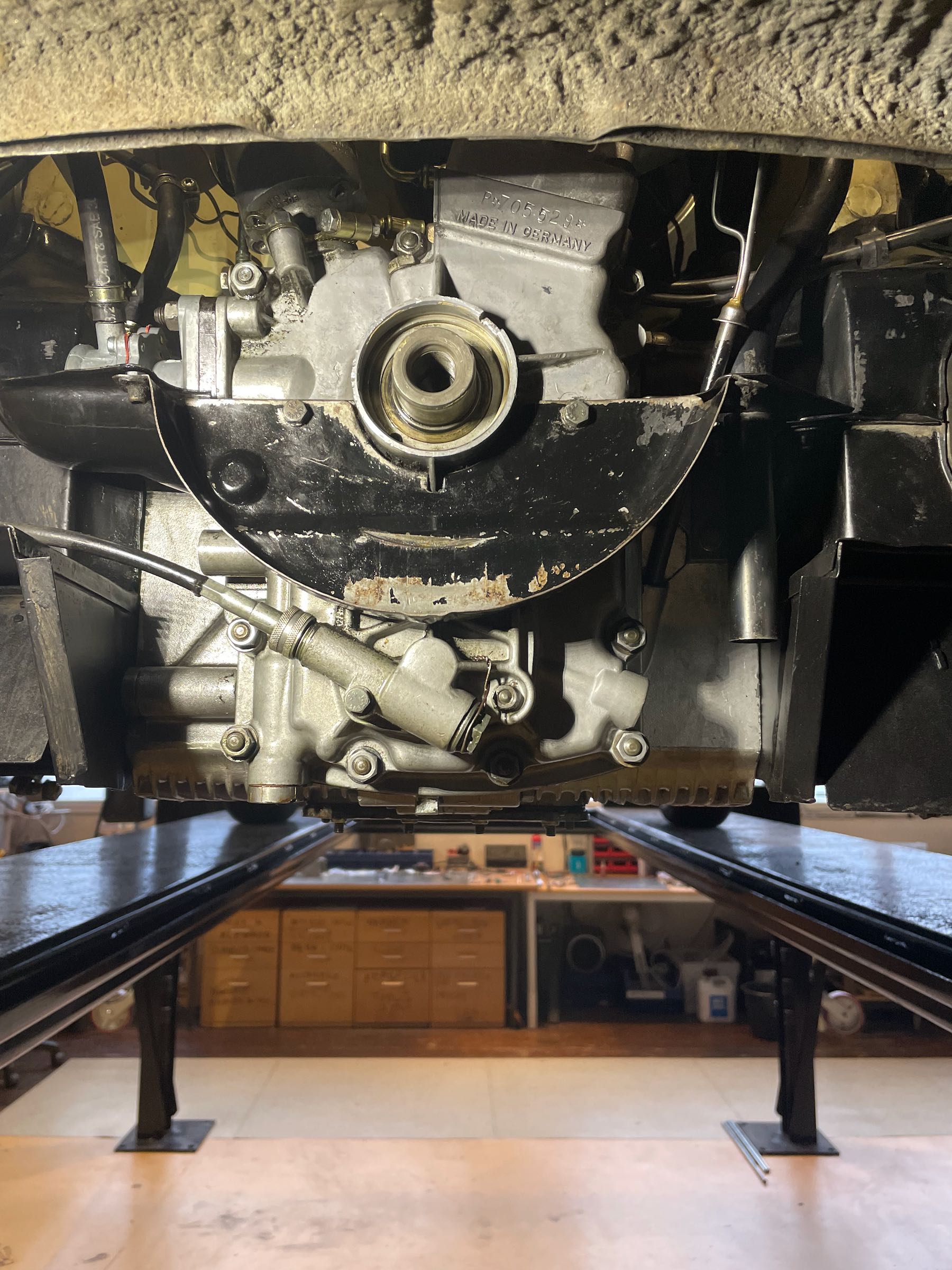 The CSP pulley seal tool is very well made, it cant be seen from this angle but it does have a small recess so that the new seal will install a mm or so deeper that the edge on the 3'd piece. I also bought another swivel head spark socket to test out, changing plugs is not the most fun job in the 356 but this new spark socket may be good. I have tested lots of different sockets, its a hassle especially with webers and larger intakes. 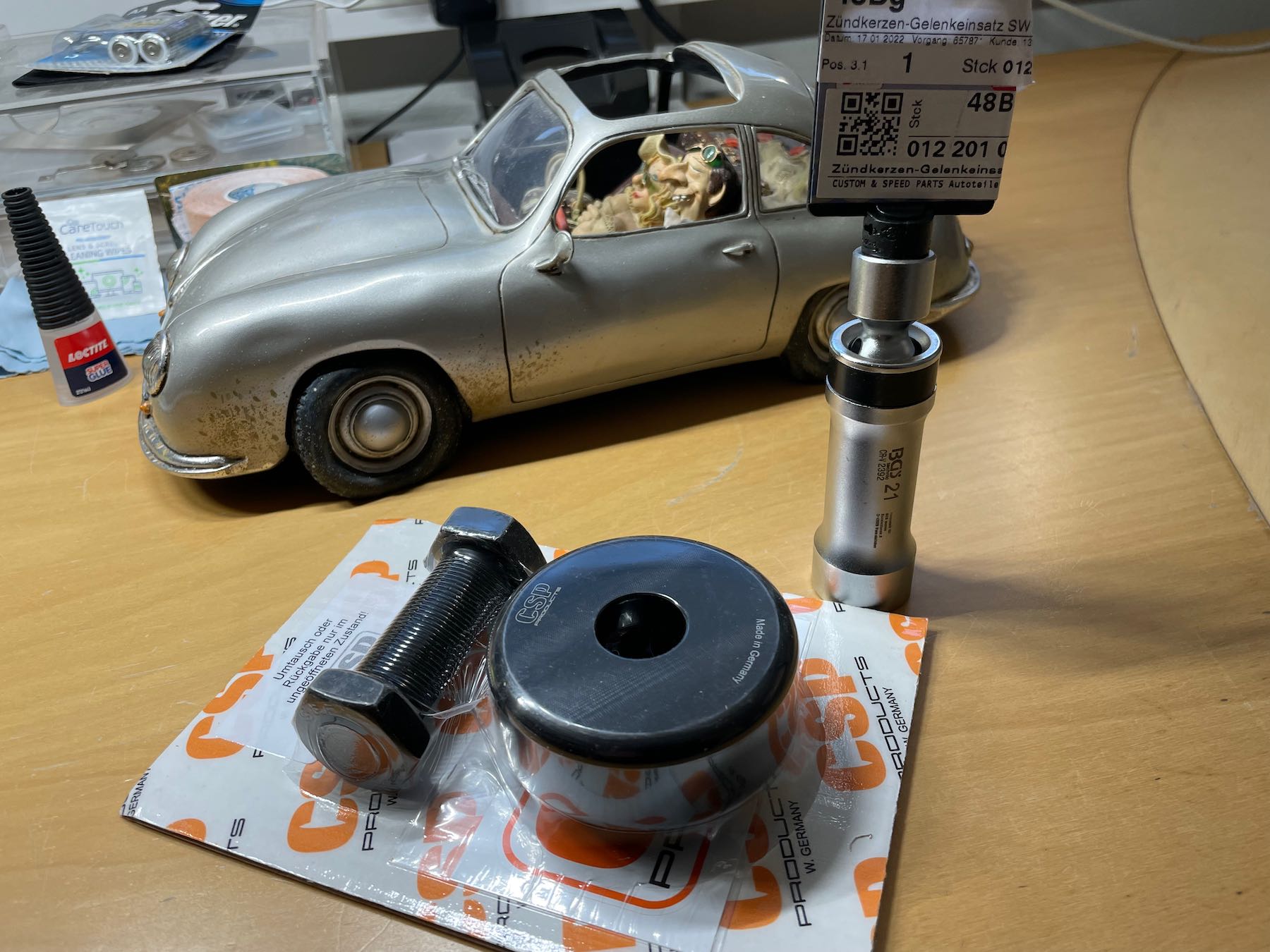 The Dansk exhaust seem to be of good quality, unfortunately the lack of a seal has stopped me from fitting it but it wont be long. 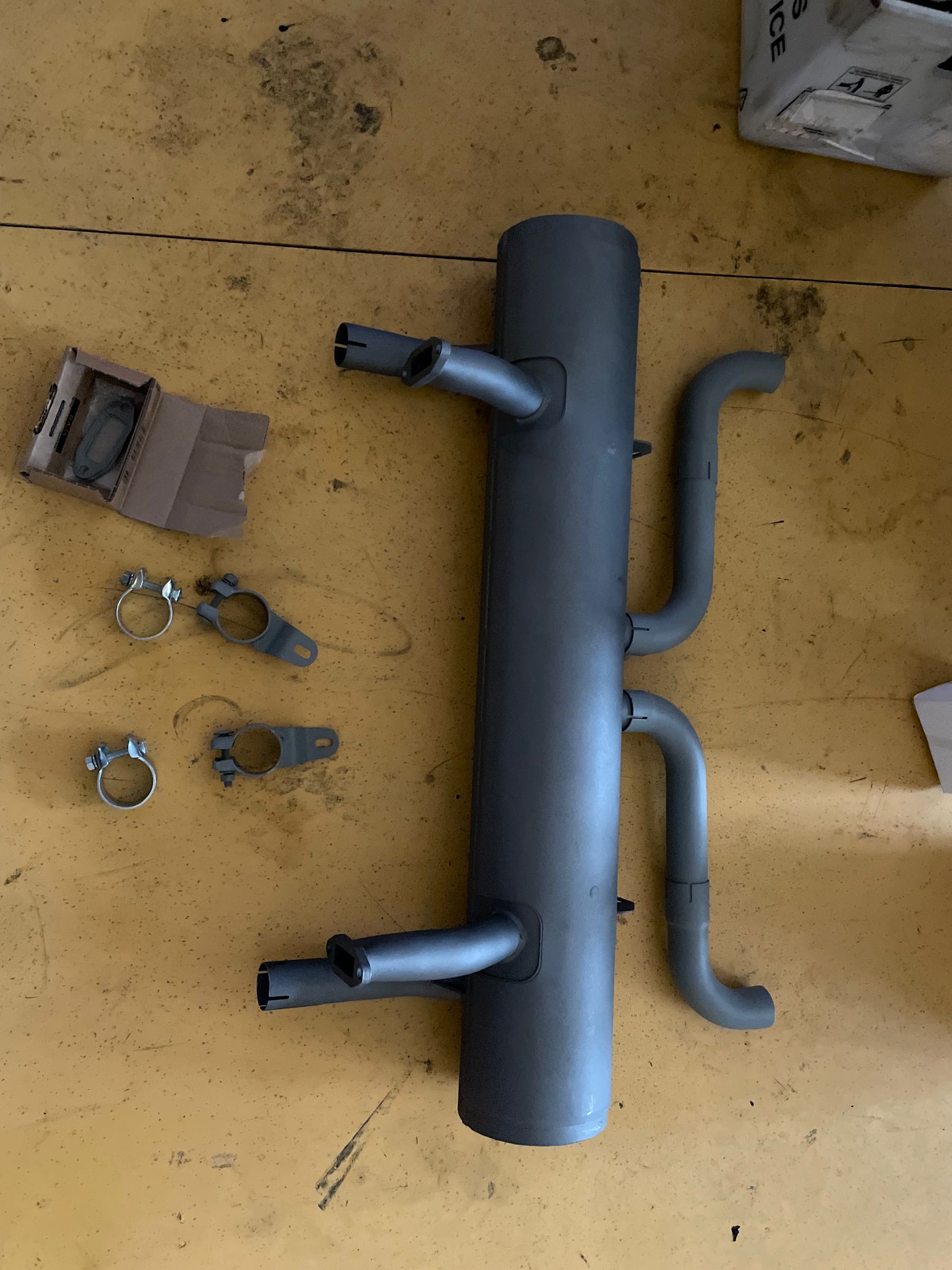 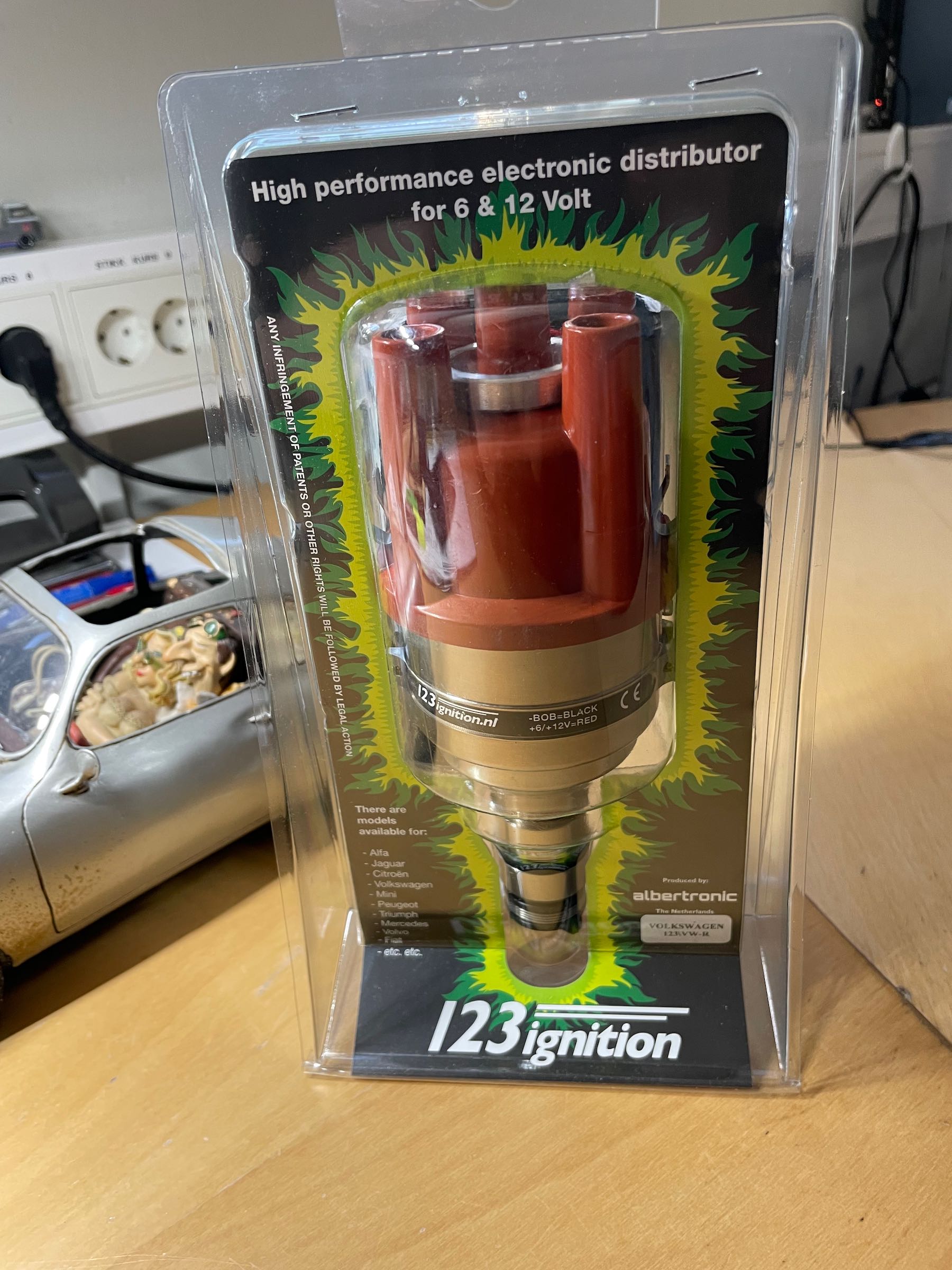 Having finished these small jobs I will turn my attention on fog lights. I have been wanting fog lights for a while. Anyone have and idea where to get the best Hella copies or did maybe Hella (classic) put them back in production?
'56A coupe & '63B coupe
Top

The CSP tool made it easy to install the new seal, at Euro 29 this tool is great value for money. I usually install seals with a mix of force by hand, large sockets and a small brass hammer. However when the axle protrude it is more difficult to line up, had the engine been out it would have been doable by hand I think. 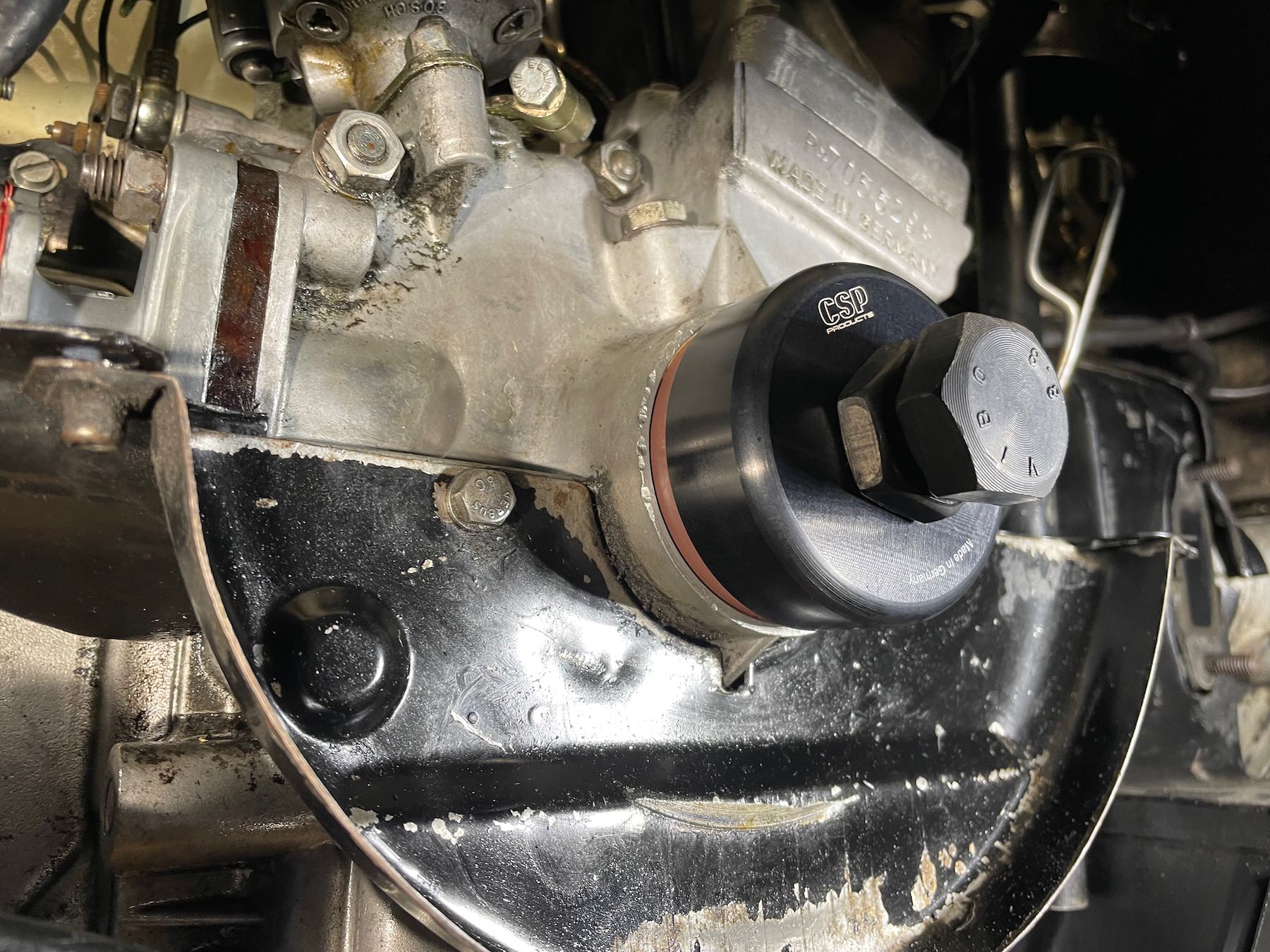 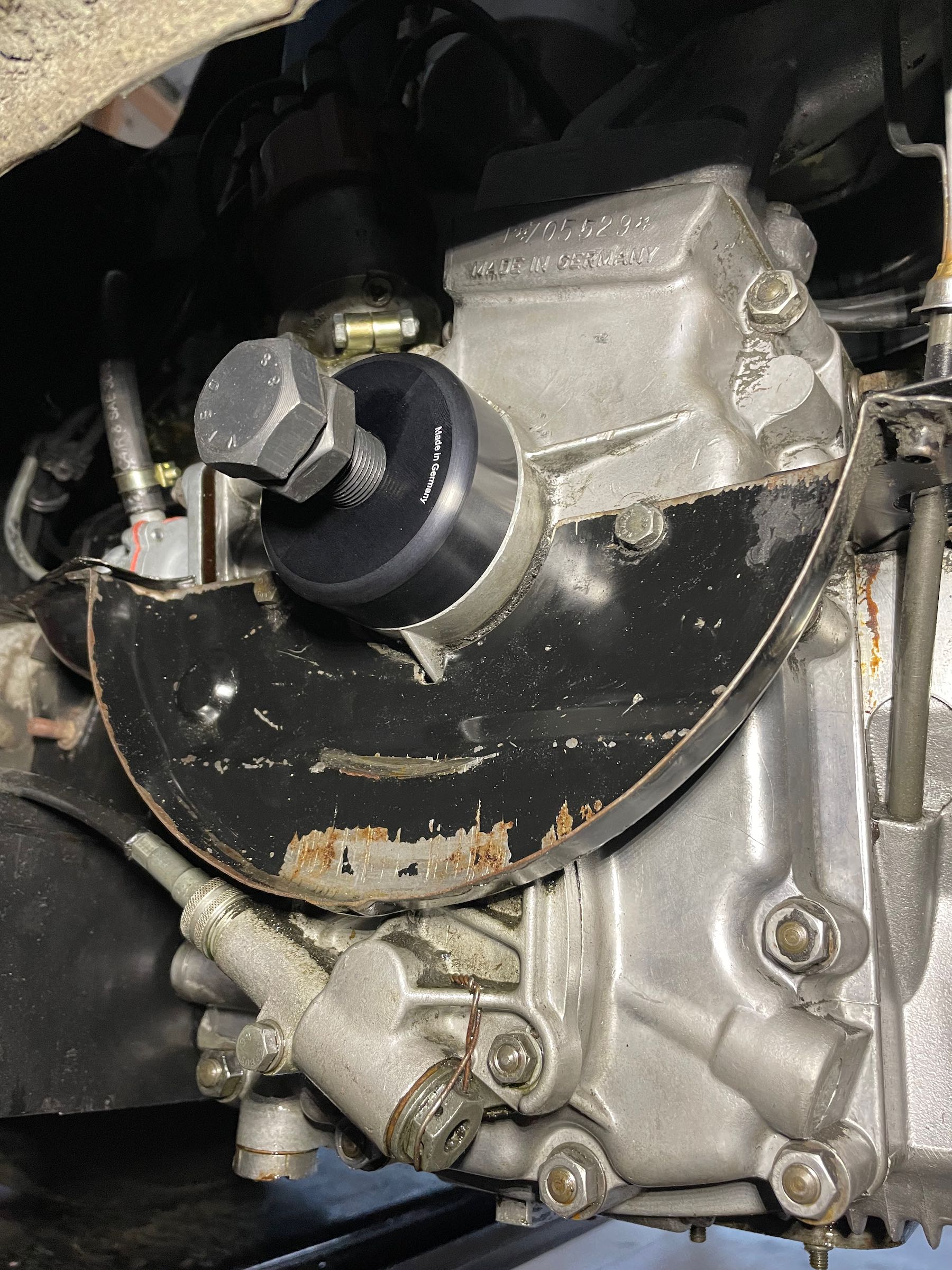 The Dansk muffler fit perfectly but the end tube kit is not really great. Tubes need be bent much more to fit, the longer pipe need more shaping. I will have to take them to someone with a tube bender. Old pipe rusty but correct, new pipe has a 90 degree bend and not perfect will touch the rear valance if installed like this. 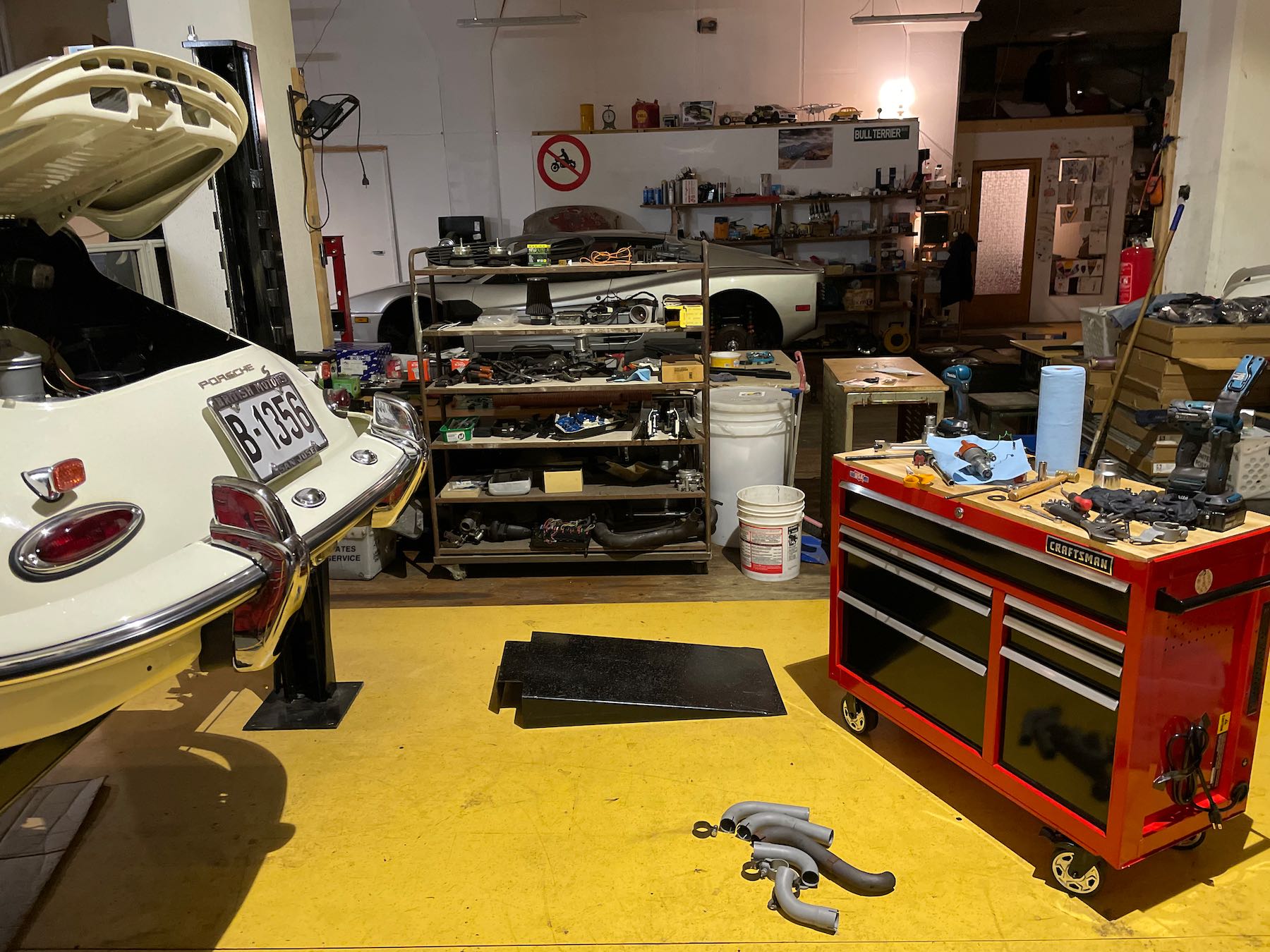 Yes; I have never seen a properly made long tube for the end-pipes. Originals were shaped tighter than 90*.
Top

Thanks for chiming in Vic, look like 5 degrees off or close to that. Maybe I will give it a try with a gas torch and brute force before considering taking the bends to the exhaust shop.

Suggestions to the best way to torque down the pulley nut "in car", a friend on the brakes? I read 50 ft lbs will do and also recommendations for RTV sealant on the washer. Maybe I can use a little loctite, just the thread gasket/locker not the "freeze" type.
'56A coupe & '63B coupe
Top

Should perhaps have started a new thread for the '63B but this one will have to do now.

Tail pipe kit: I bought a cheap pipe bender and tried to bend the longer pipes, did not bend much, but it bent enough to let the bracket clear the rear valance. Heat and pressure made it fit, but did not like the quality of the tailpipe set.

The shorter pipe was cut 2 cm else it would not enter the funnel. The brackets should be modified and with a shorter pipe the kit couold be fitted out of the box. The clamps and welded clamps that come with the kit are too bulky. 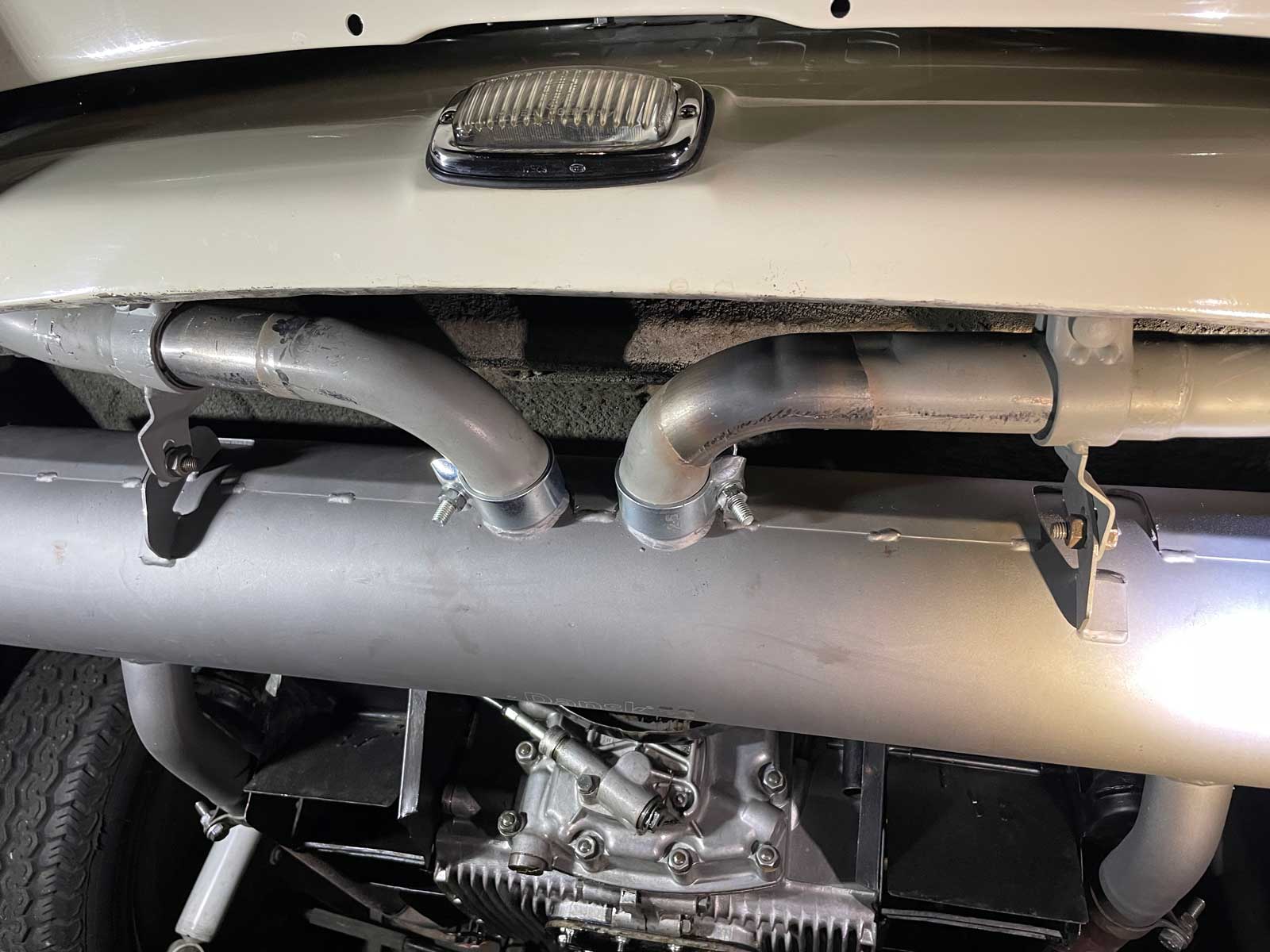 
The 031 distributor has now been replaced with a 123 distributor. The installation is fairly straight forward, open the hex nut and set the microswitch to position 6, install the dizzy as close to correct as you can and turn around until the LED goes on and off with the motor on TDC cylinder 1.

This method got me to 2 degrees BTC or so. With the stroboscope I then set the ignition at 5 degrees TDC. The engine started very easily and I must say it is the most stable ignition the '63 has had, the response was also much better up through the revs.

Late Christmas present: After 6 weeks of waiting, I received a rolling jack for my 4-post lift. Don't not know what most people prefer, but I do not like to lift classic cars in a 2-post lift. This is a 2000 kilo model and manual pump, I did not go for the pneumatic. The "AC Hydraulics SD20L" is made in Denmark, you even get to choose between 4 RAL colours.

This will be so much safer than the bottle jacks I have "balanced" on a sliding beam. The price of the jack was about $ 1300 without tax, that is less than the RJ4500 jack (made in China?) I could get from Dannmar (my 4-post lift). 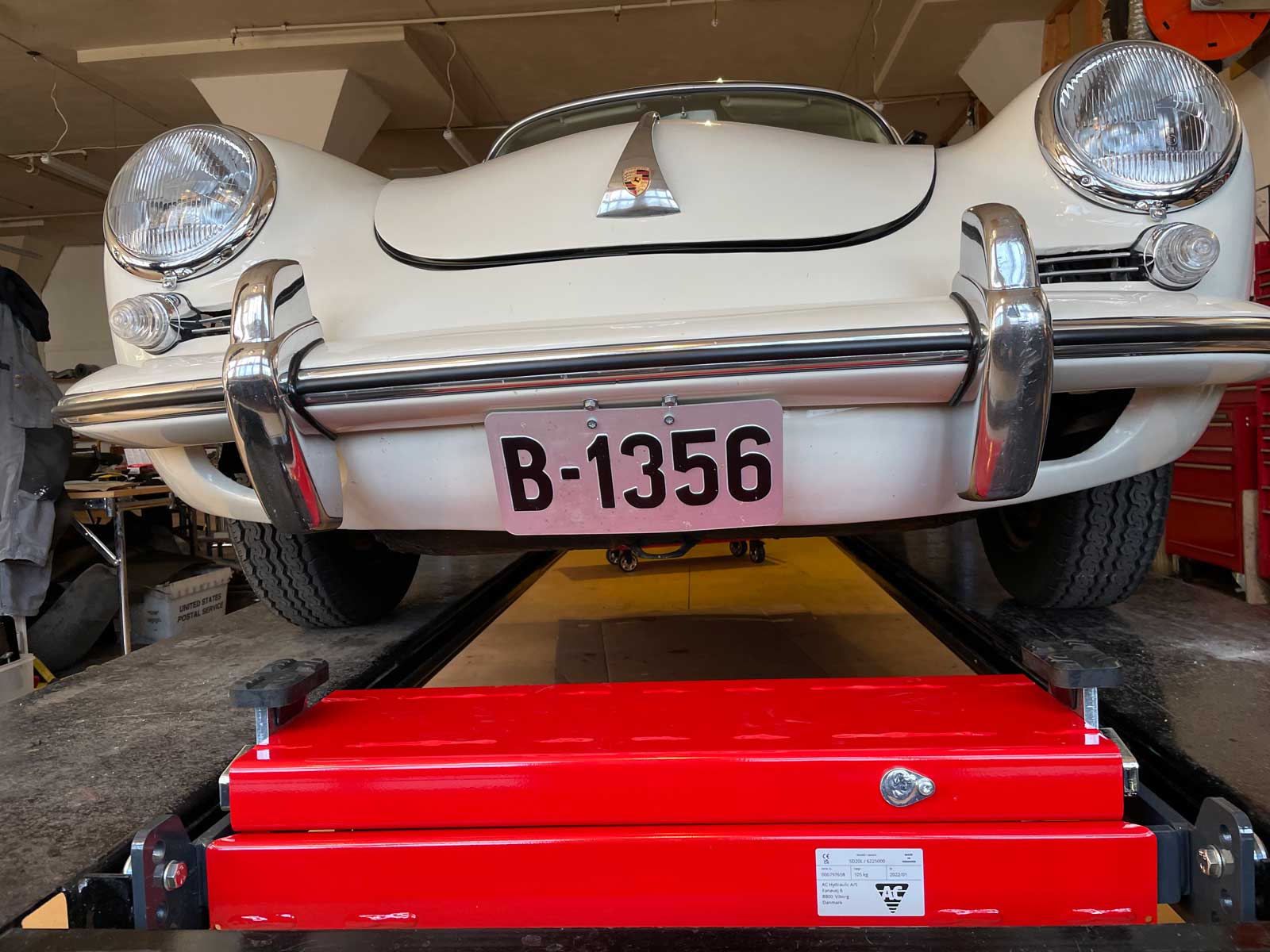 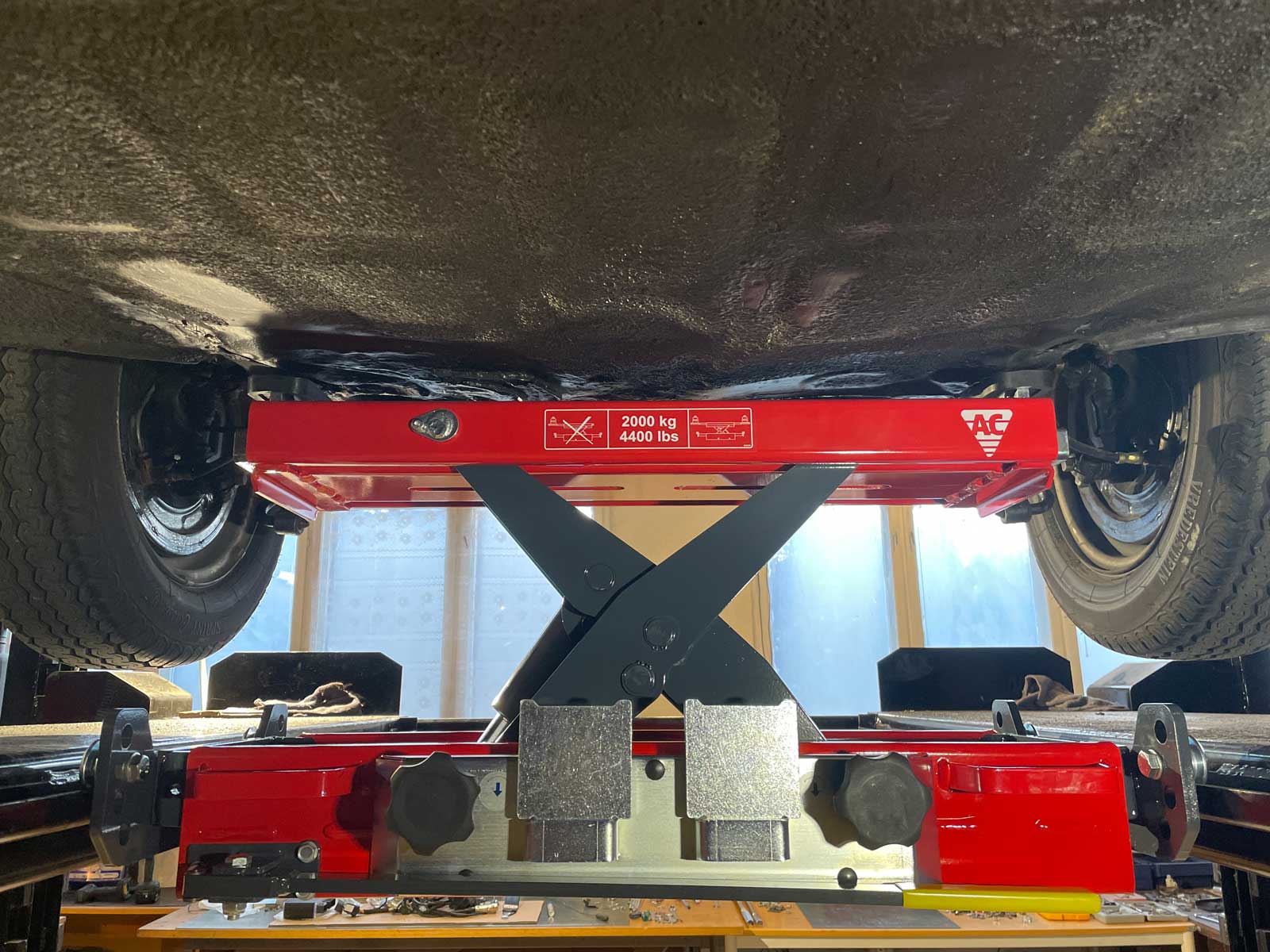 Hooray, the B is ready for the spring/summer and we are still in January.
'56A coupe & '63B coupe
Top

The metal, chrome and glass seem to be top notch. These are not light weight but heavy and solid but no bulbs, I have to find yellow H1 bulbs in 6 volt.

Have not installed them yet, will be running them through a relay.

Need to turn the front cover they are setup for MB 190 SL now. 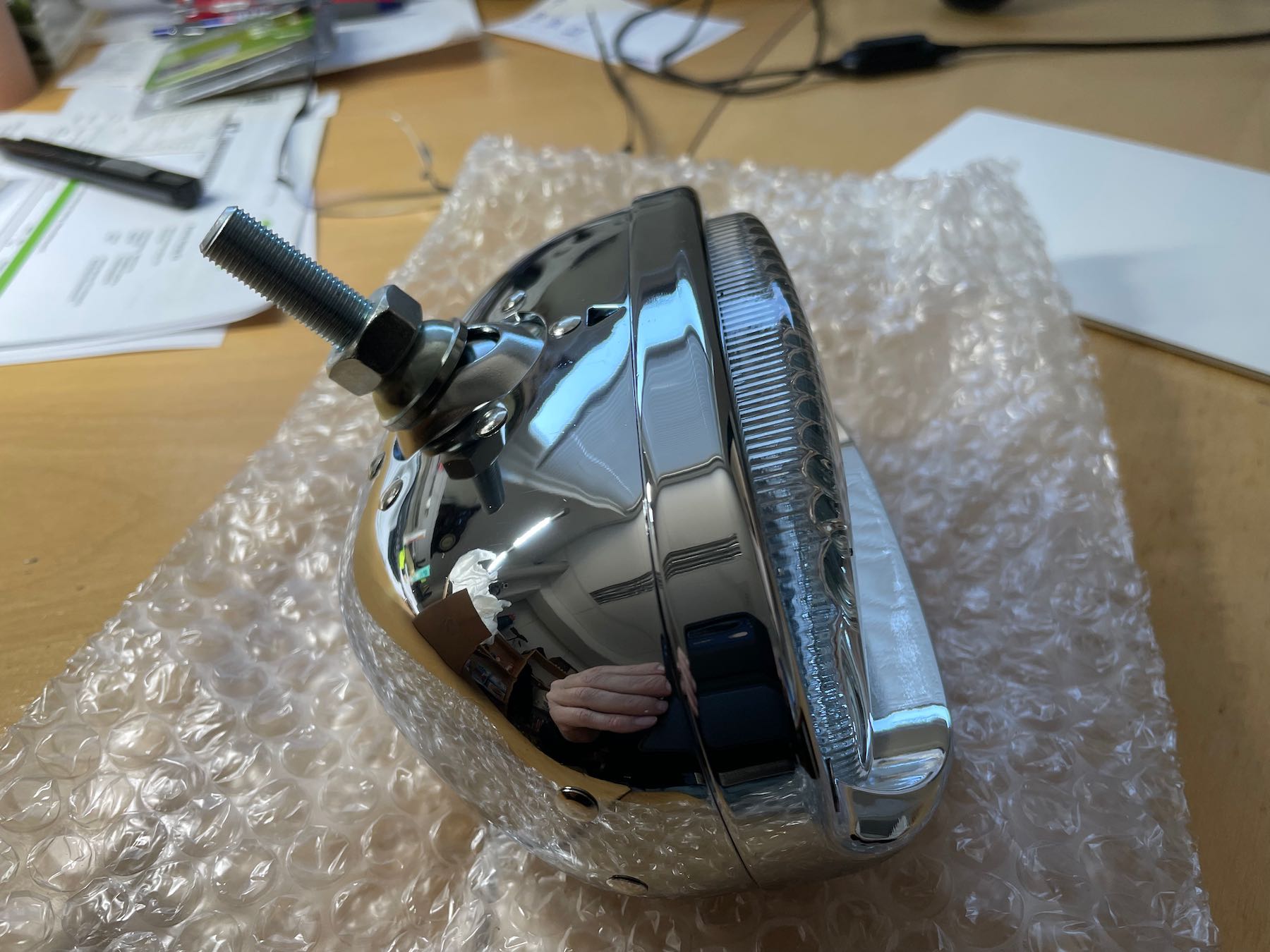 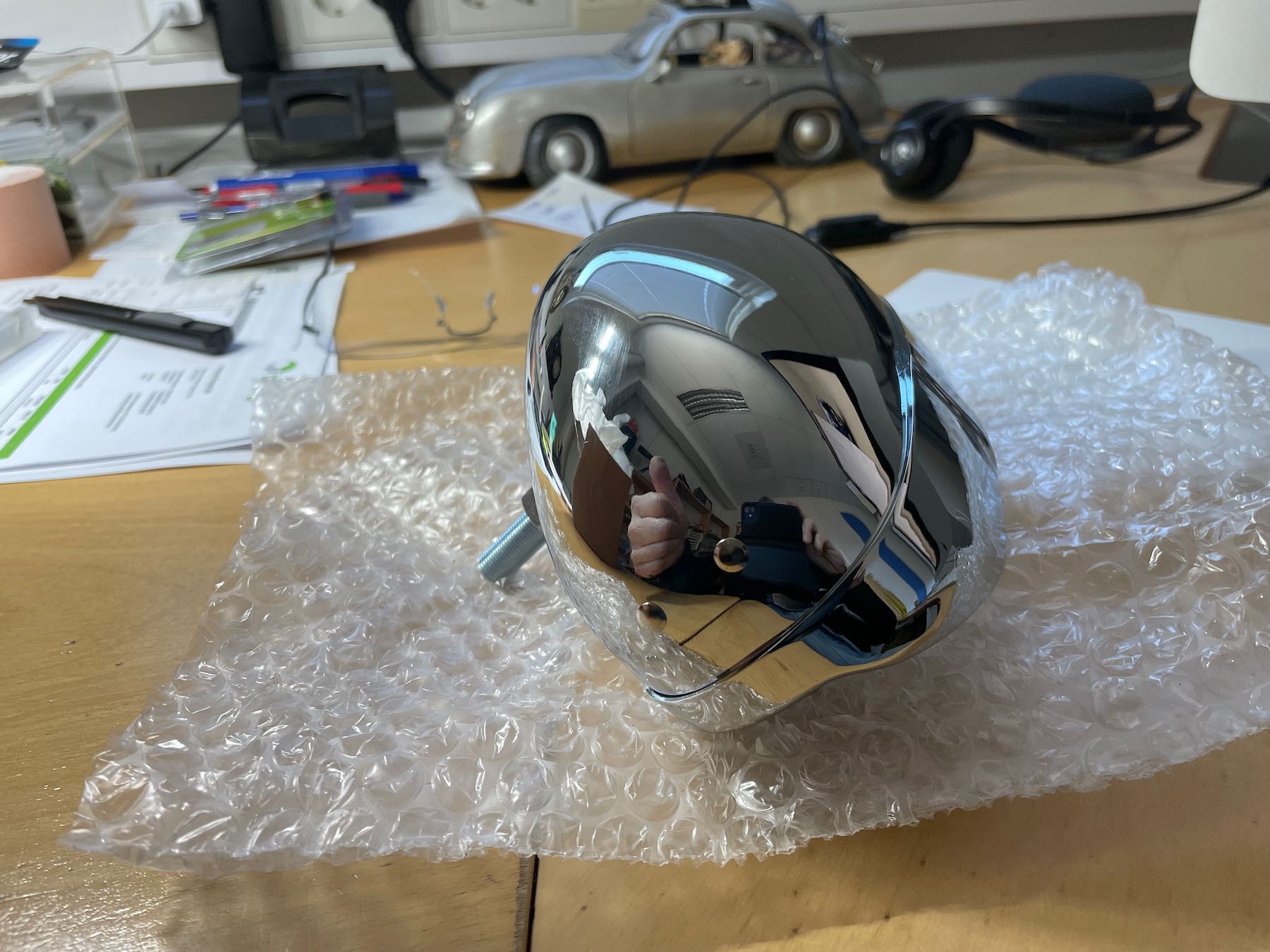 I will shoot a photo when they are installed, so far very happy with the purchase.
'56A coupe & '63B coupe
Top

I like your jack for the 4-post lift. I have one on mine, but it is slightly smaller in capacity, 3500 lbs. My 4post lift has 6' of clearance underneath when up, and I thought that was plenty. Until Steve Douglas came to visit!
Top

Yes, I wish I had bought this jack earlier, it is a must have for a lot of operations. The jack is flexible and fast to use for being a manual pump model. "It's a lift-time investment". No affiliation, but they make really good stuff: https://www.ac-hydraulic.dk

One reason for installing fog lights in the '63 was to have driving lights, over here (Norway) and most of Europe we have to use driving lights daytime. I was thinking about using these ideally with LCD bulbs but it is difficult enough finding 6 Volt H1's not to mention 6Volt H1 LED bulbs. 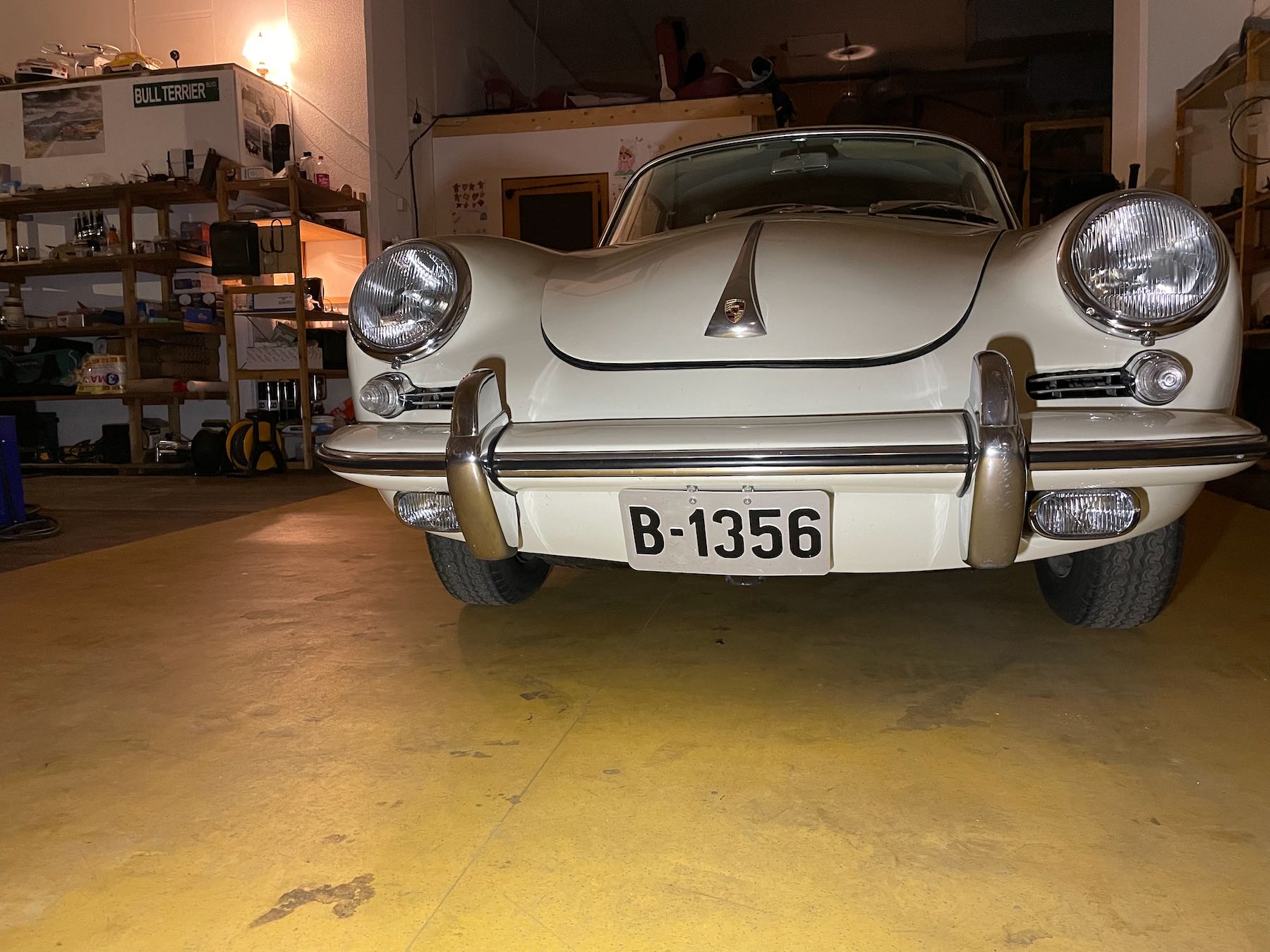