Discussion of 4-Cam Type 547 engines (and all the Fuhrmann racing variants) and cars that powered them.
Post Reply
76 posts
Message
Author

You could put it in a bike, no bell housing. 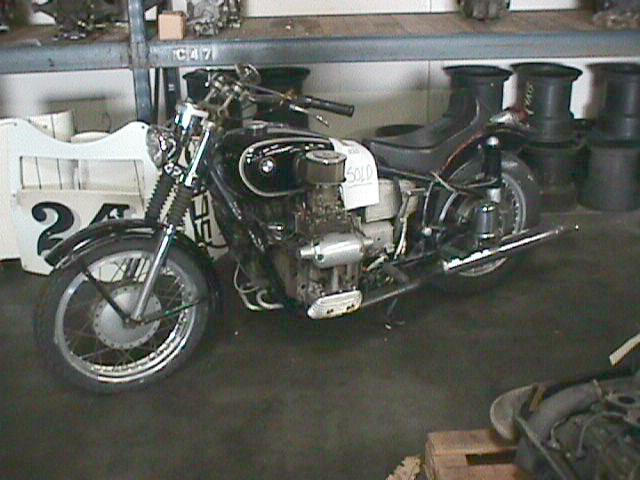 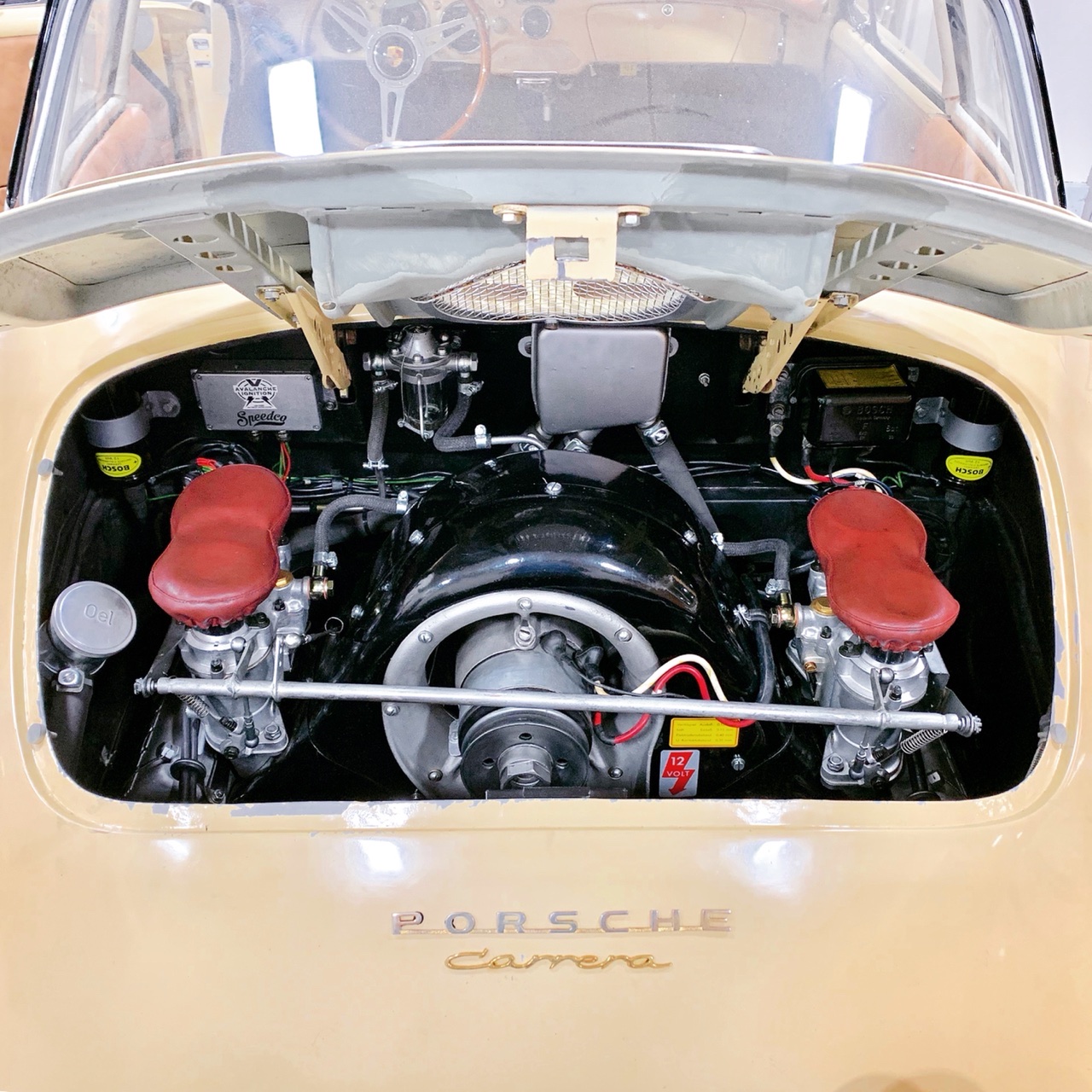 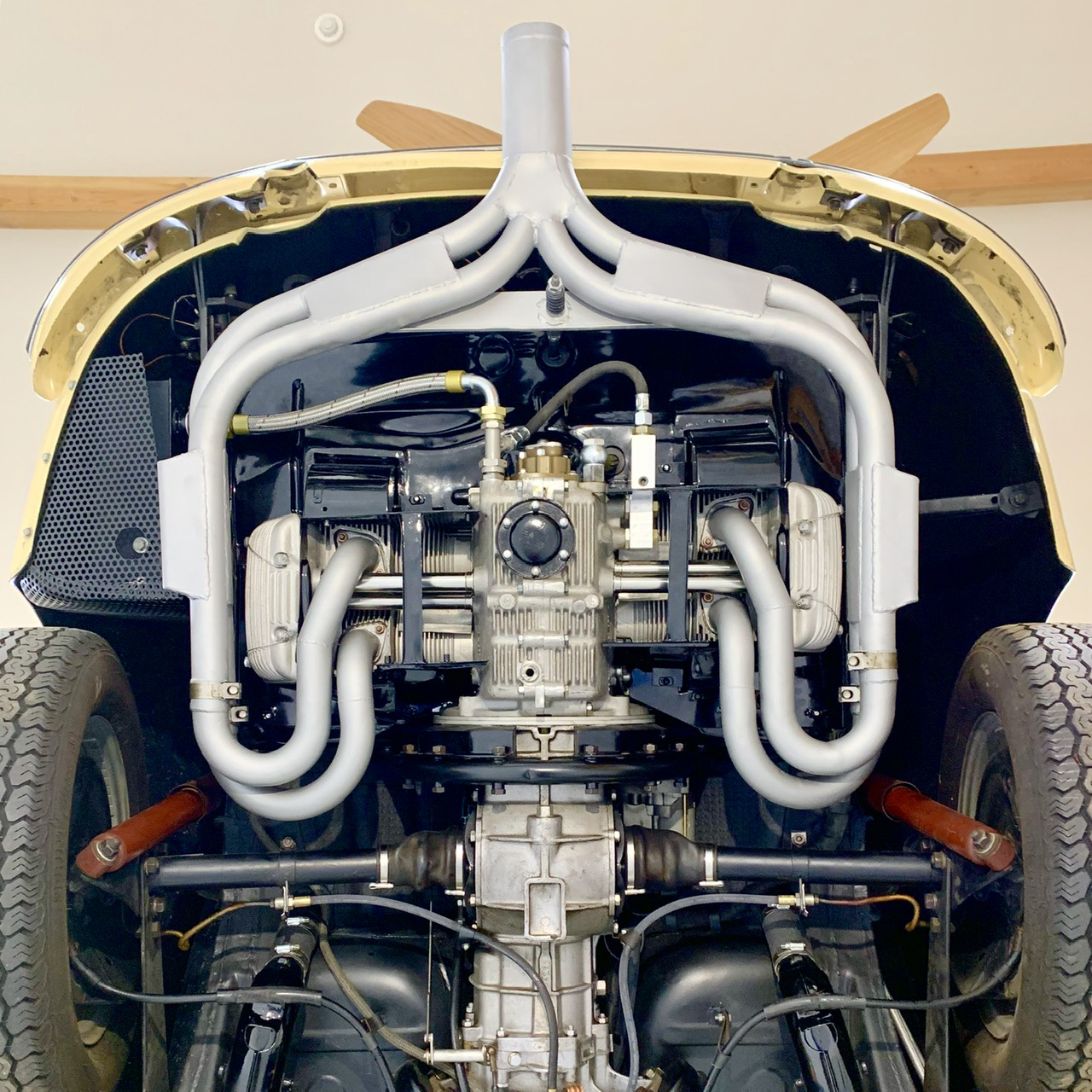 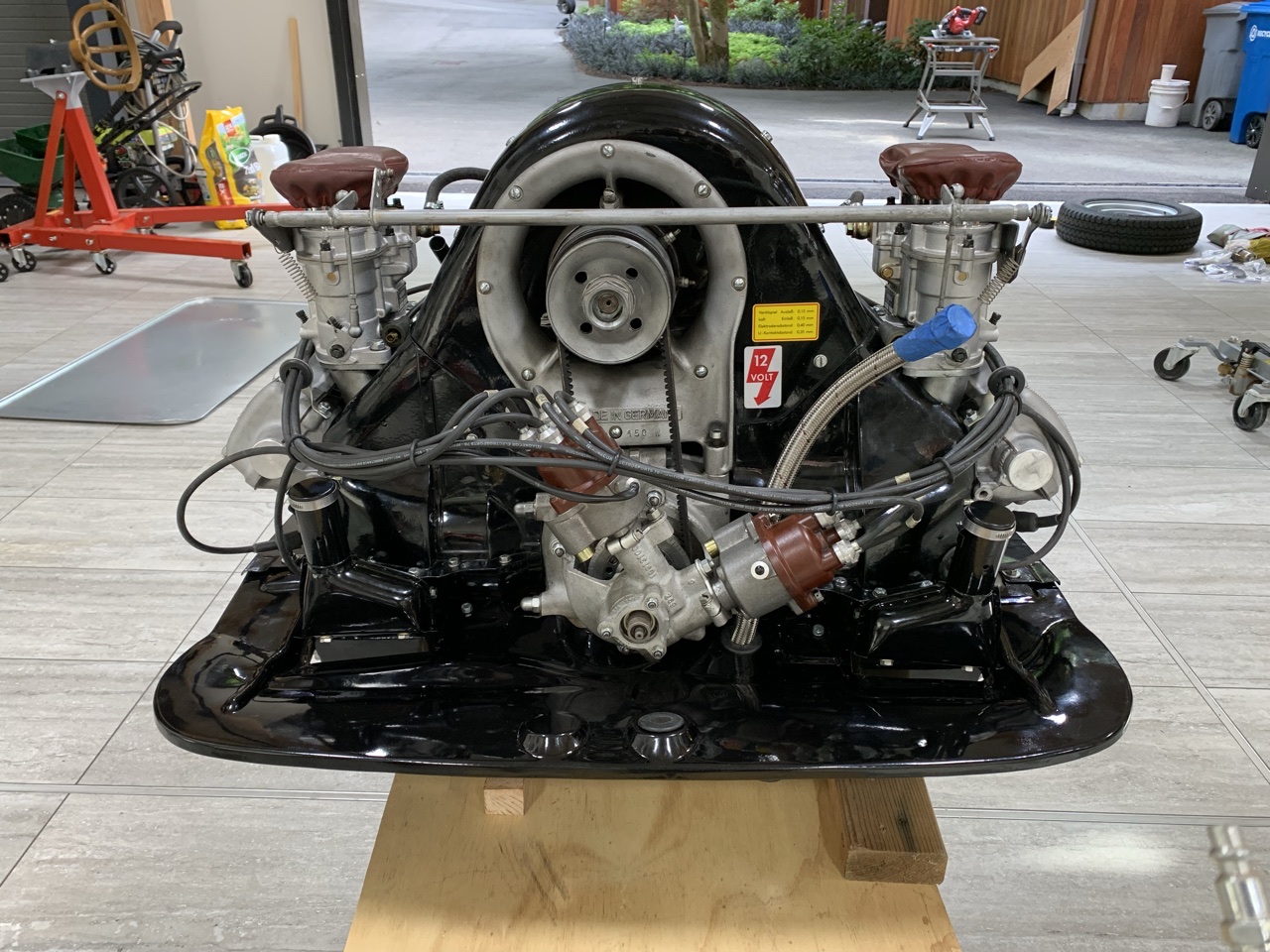 One of the last, 587/3 third or fourth from the end built as a spare BTW for sale 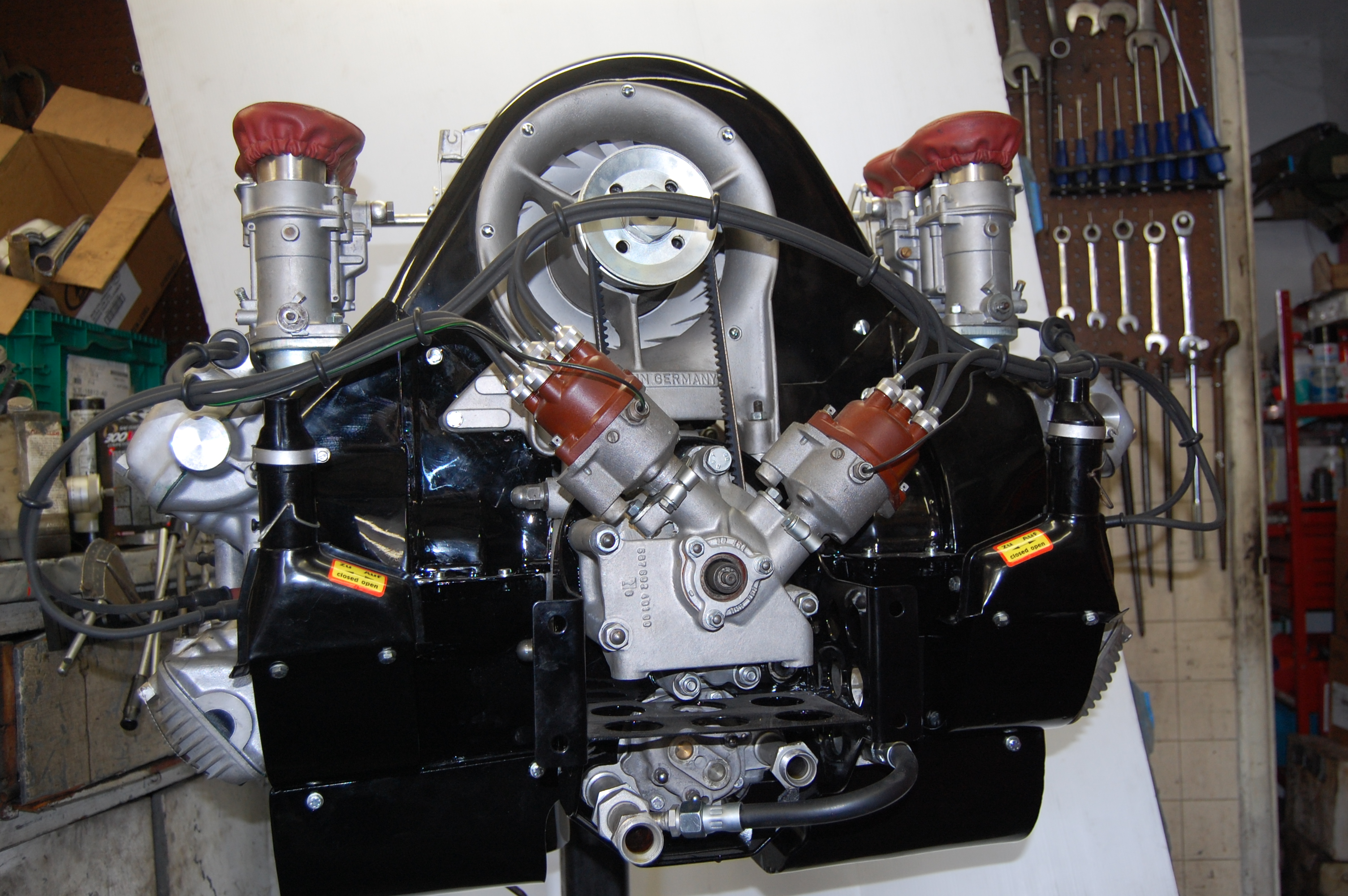 A Weekend of Whiskey and fun - we ran up 4 Engines 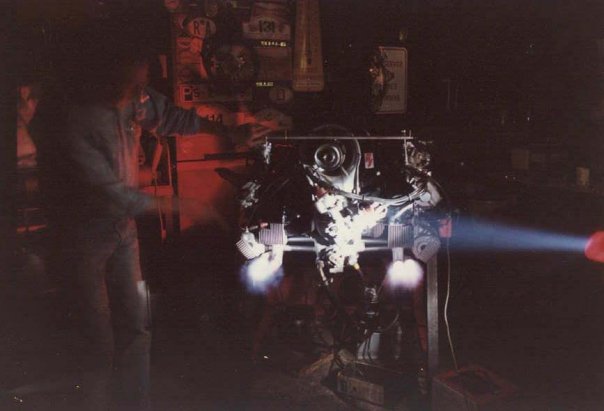 That is the Late and very much missed - Barry Curtis 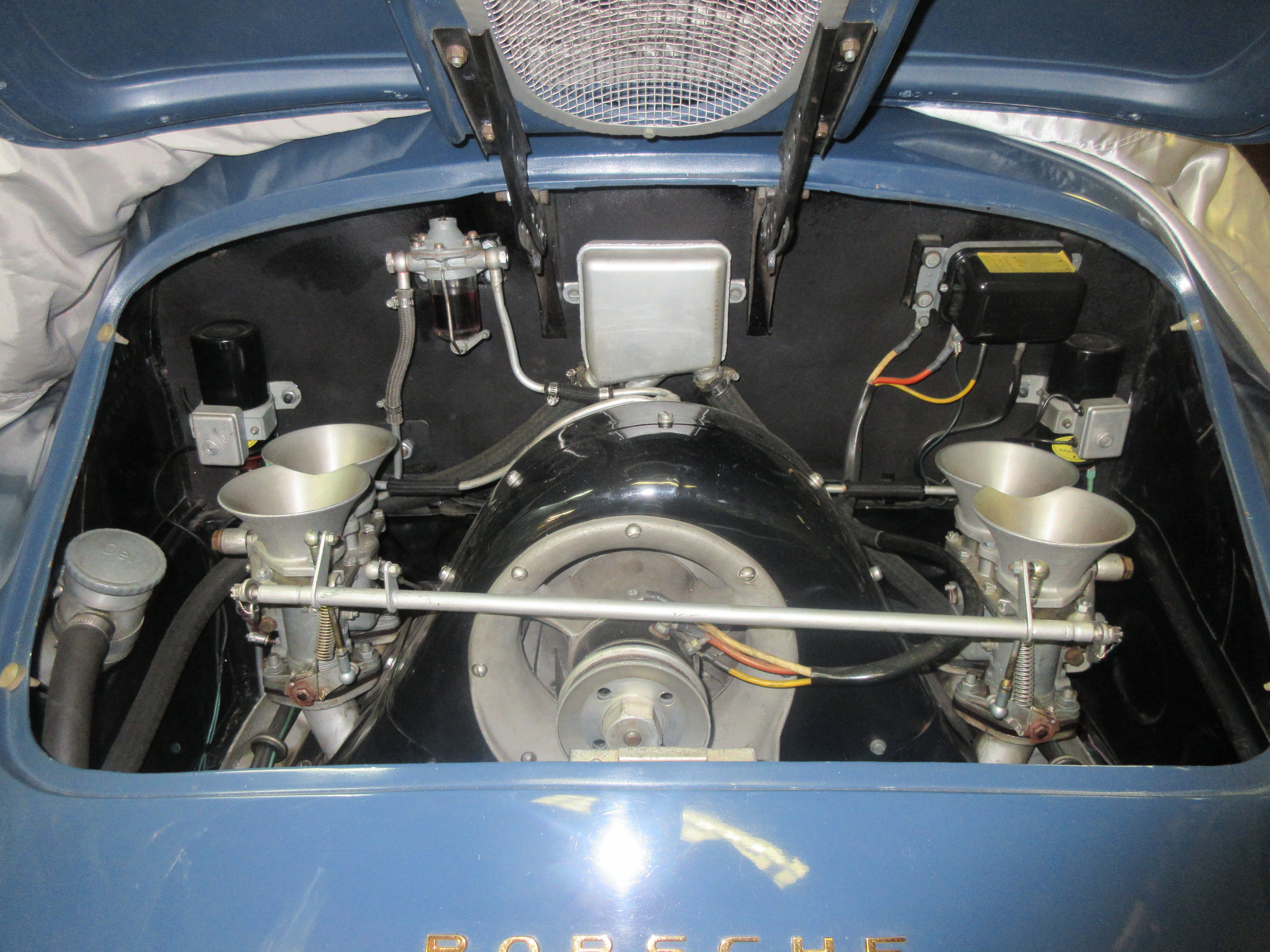 The engine is a 547 roller bearing engine, vee drive, with 692 carburetor linkage and Solex 44s. The engine and the car were built over a period of 4 years to run the Monterey Historic Car Races in the Porsche feature year of 1961. We made it, and ran nearly every year with this car until 2010. 14 years until a top end rebuild, because I was a graduate student at the time of the first build and didn't have the resources to do it right back then. It was a team effort: Clairence Daniels III, Chuck Forge, Ernie Mendicki, Jim Wellington, Bill Doyle, Gerard Rainey, Dema Elgin, all contributed skill and expertise.

I recovered the original 692 block from Jim wellington many years ago, and one day I intend to reunite the 692/2A PB with the car.... when I get around to it.
Top

Hi Harlan
If you need any parts for the 692/2A engine i would be honored to help. We need owners like you that actually use these engines. What updates do you envision to justify the "A"?
j
Top

Jacques,
Never fear, when I get back on Carrera projects I will be calling you again. Thank you. I'm about to put one of your pinion bearings into service in the '56, and after I put the 692 PB engine in the '59, I might detune the 547 roller to run on street gas and put it in the '56. That was the original plan for the '56.
There used to be quite a number of Carreras running the Historics. Bill Doyle once told me that he had 30 engines which ran the event, not all at once of course. (Of those 30, only one blew up, Ben Pon driving Dean Watts Abarth Carrera.) Al Cadrobi used to support several Carreras at the same time there. But times have changed and the Historics isn't what it once was. Every once in a while you get a man whose vision complements yours and who has the resources and determination to make it happen. Steve wanted to see the old race cars run, driven by their original drivers. And I wanted to drive one of the old Carreras. We were lucky that for 30 years, Steve made it happen.
Top

Ibrahim - no I didn't ask how long or how much $$ it took to build the aluminum shrouding. I didn't contract to have it done, and I'm sure time and cost were not an issue. The workmanship and surface finish look speaks for itself. This particular engine attracted more attention than any other engine we had in the shop. Even Boxster and Cayenne owners who couldn't spell "four cam" took notice.

Harlan - nice picture of the engine compartment. This car is a 59 GT coupe?? I am helping restore a 59 GT Speedster right now, and engine compartment details are one of the things we are working on. Are you running original TK12A10 coils with the resistor boxes wired in, or smaller diameter modern day replacement coils? Has the fuel pressure regulator been reliable? Are your running the high lift intake cam lobes in your roller engine to go with the 44mm Solexes?

For your original 692/2 engine build, what does the "A" designation in 692/2A mean? I know what 692/3A means, and I think I remember reading a factory service bulletin that talked about updates to a 692/1 GT engine with an A suffix..
Top

I've made several sets of aluminum engine shrouds over the last 12 years and it is very time consuming work. It takes me almost a month to get one done from scratch. Getting the internal scrolls fit to a single piece shroud with out rubbing on the fan is interesting. The factory numbered all the pieces of the main shroud as a set. Naturally a tight fit around all the edges is mandatory especially around the manifolds. Here's a couple of photos of one on a stand and then when done in the car. 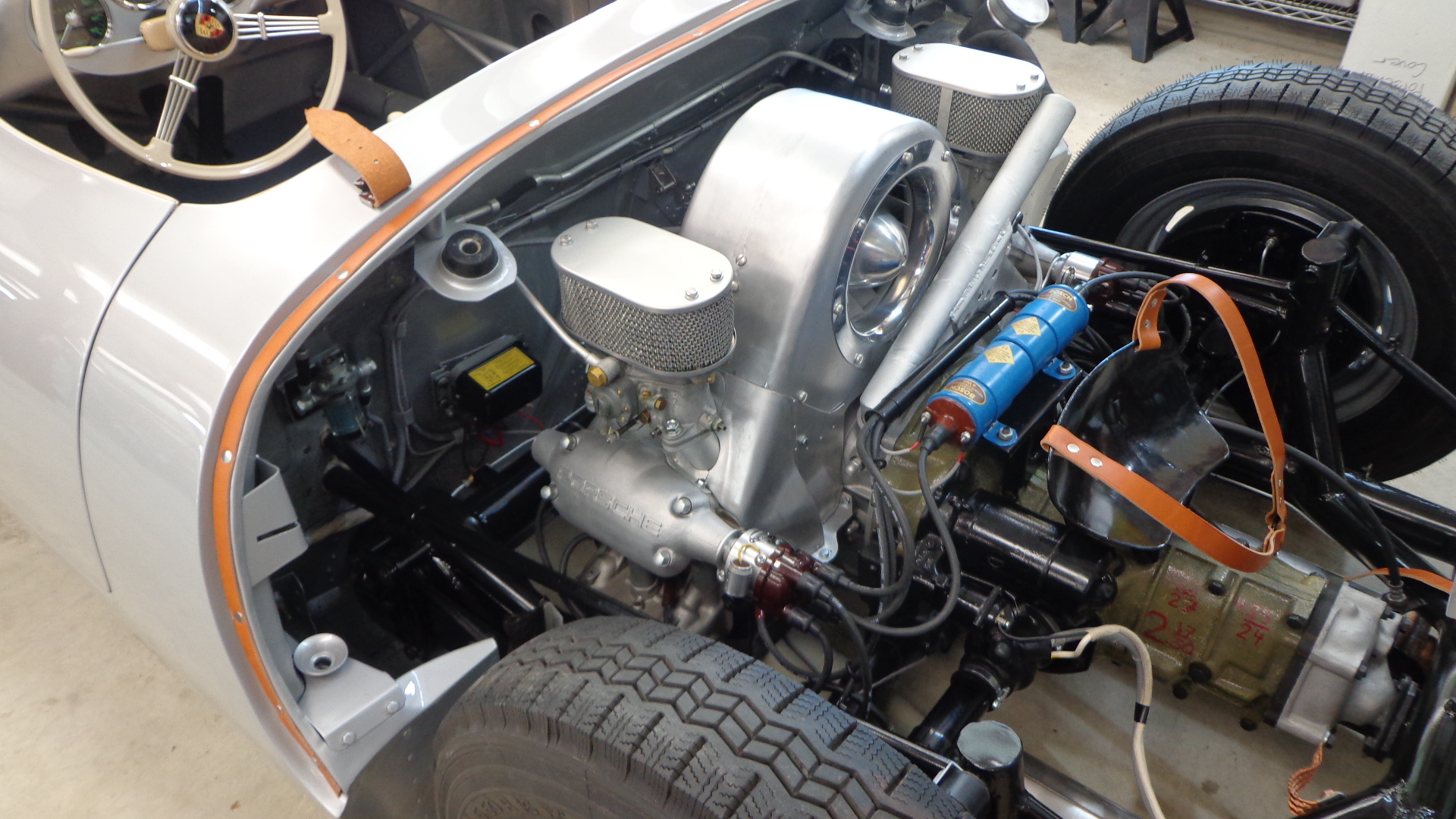 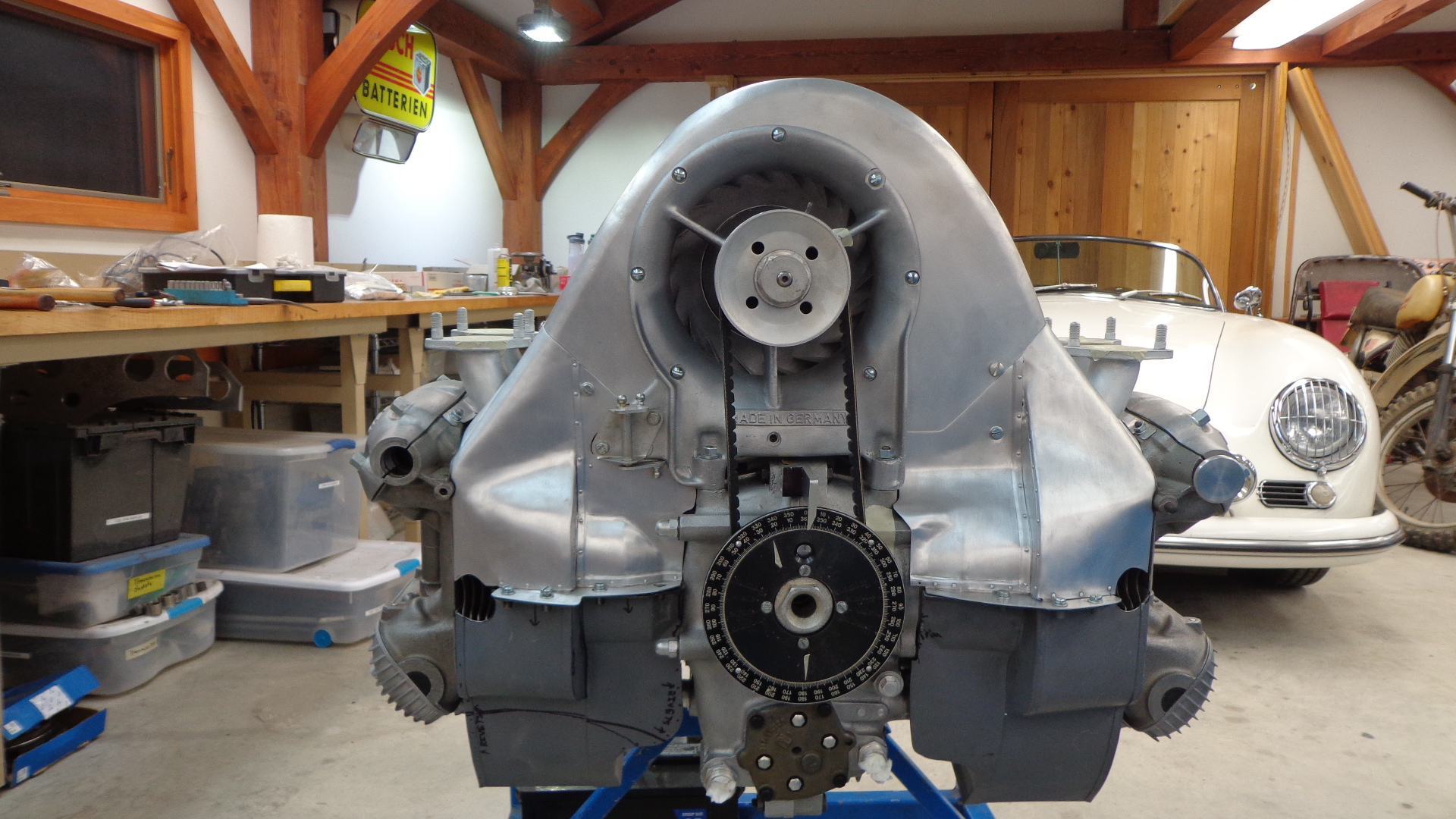 Hi Rainer
do you do the internal ducting like the factory? it looks like to me it is harder to do than the exterior.
j
Last edited by Jacques Lefriant on Tue Mar 23, 2021 10:34 pm, edited 1 time in total.
Top

That’s beautiful. Without intending to be obnoxious, why would you do that? For paying customers, or just a good challenge?
Cleveland Ohio
62 Cabriolet
56 VW
02 IS 300
04 Sienna
Top


Harlan - nice picture of the engine compartment. THANK YOU. This car is a 59 GT coupe?? YES, ONE OF THE FEW WITH THE FUEL FILLER THROUGH THE HOOD. I am helping restore a 59 GT Speedster right now, and engine compartment details are one of the things we are working on. NOTE THAT I HAVE LEFT OFF THE COLD AIR BOXES THAT ATTACH TO THE DECKLID. Are you running original TK12A10 coils with the resistor boxes wired in, YES or smaller diameter modern day replacement coils? Has the fuel pressure regulator been reliable? VERY, AS LONG AS YOU GET THE GASKET RIGHT. Are your running the high lift intake cam lobes in your roller engine to go with the 44mm Solexes? NO

For your original 692/2 engine build, what does the "A" designation in 692/2A mean? IT MEANS I WASN'T PAYING ATTENTION WHEN I TYPED THAT. HOWEVER WHEN I HAD THE CRANK MADE IN ENGLAND TO WELLINGTONS SPEC IT IS A 3A CRANK AND HE MODIFIED THE CASE TO SUIT. THE RODS ARE CARRILLO. THE CYLINDERS ARE RELINED WITH NICKASILI AND THE PISTONS WERE CUSTOM MADE BY VENOLIA WITH 911 RING WIDTHS AND DEVES GAPLESS RINGS. VALVE POCKETS WERE MINIMIZED. AND I DONT RUN THE ORIGINAL TYPE RETRACTED GAP PLUGS. SO MAYBE THE "A" SUFFIX APPLIES AFTER ALL. I know what 692/3A means, and I think I remember reading a factory service bulletin that talked about updates to a 692/1 GT engine with an A suffix..