My crankcase has a mystery hole near the oil cooler. its a 1955 preA, motor #35287. I attached a picture. Any ideas what goes there? 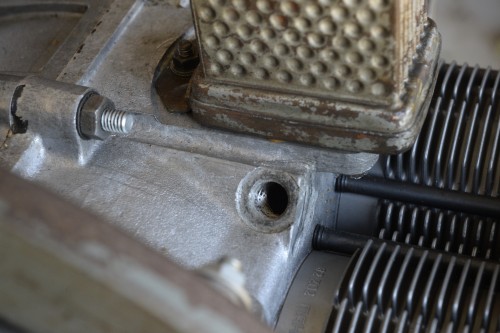 Oil temperature sender. They were doing some experimentation with position around that time.
Top 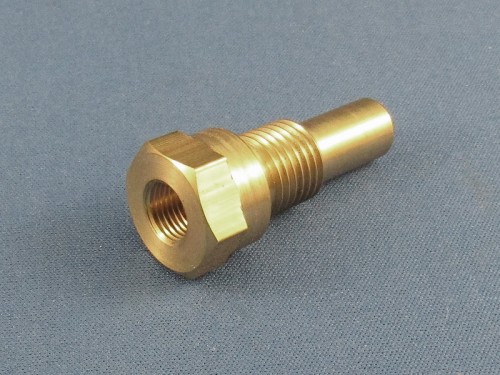 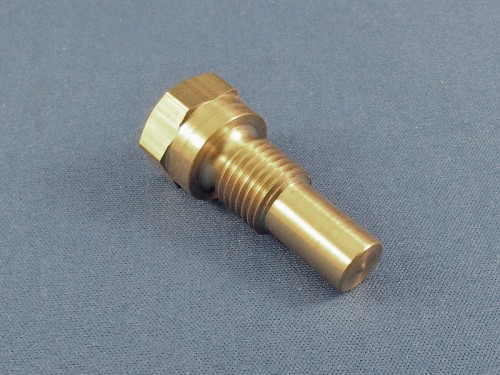 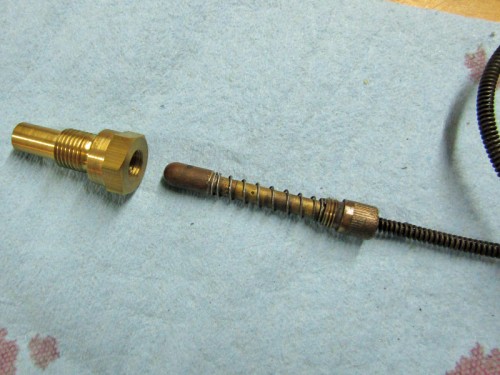 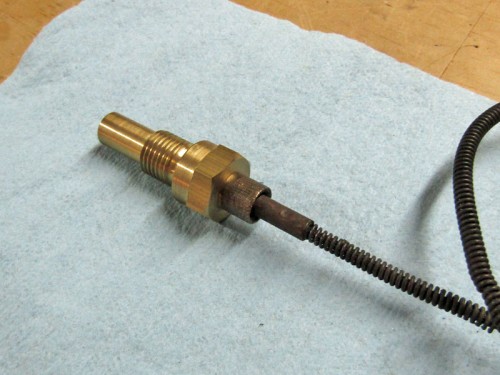 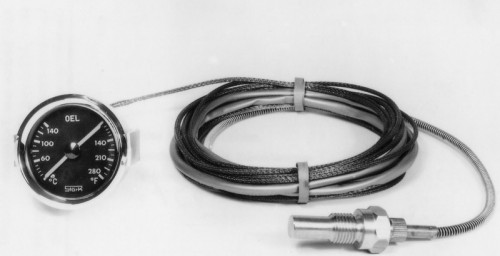 FYI, A regular oil temp sender fits that hole if you want to convert to the later gauge.
Top

Thank you for the responses. You broke the code.

The story is: In 1975 or thereabouts I bought a rather shabby pre A. I wanted this vintage because I was familiar with how they drove. I bought a 1956 Speedster in early 1956 (for $2995) trading in my 1948 MGTC. The MG was rich with style. I felt I was in a Margaret Rutherford movie. When I got the Speedster I was amazed how good a sports car could drive. I could actually use the brakes on rough roads, and the suspension was comfortable, I had the Speedster until a saw a Carrera coupe in a used car lot in 1958. I pulled in and slobbered over it. It all fogged over and the next thing I remember was driving it home. Reviewing the documents later I found they gave me a $2500 trade in for the Speedster! I asked my then friend, Norbert Nieslony,. a factory representative, how come so generous and he said they couldn't get the cars for the market. Well, my life with the Carrera is another story. If you "google" my name and the word Porsche, ie "Roger Craig Porsche" you can read all about it.

Back to the pre A. When I bought it the owner asked did I want the original motor. I said yes and bought it all in parts, but he said complete, for $350. So all those parts have sat on shelves until last year. I decided that I needed a harmless hobby to fight back the virus and decided to restore this old unit. The car has been cosmetically restored to look like new. The only engine work done was a head rebuild (its swallowed a valve seat). The motor still runs great! Over so many years I needed to verify that I was dealing with the truly, original motor. I was able to verify this and then could decide the level of rebuild. I had Carburetor Rescue do the little solexes. So that is where I am now.

For fun I attached a picture of the rebuild carb. 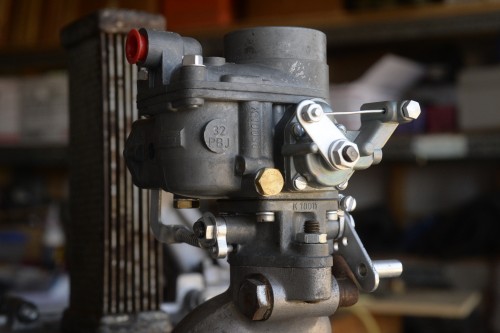 Since your engine was a 546/2, was it a Continental? What is the chassis number? If a Continental, you can go to www.356continentalregistry.com
to register your car in the database.
Jim Wayman
Top

The hollow bolt you show looks like what I recall the fitting in the motor presently in the car looks like. The picture looks like you have a nice, fresh, concourse grade one. Did you find a source for one of these, or did you make it up yourself. I need a new one. If I can have yours, or buy one, or make one, that would be cool. If you could help with any of this, neat. If I need to make one could you supply some dimensions for me. For example what is the bolt diameter and thread of the male thread. I estimate it at m15x1.25, but its hard to judge. Also some external dimensions would be helpful.

Thank again for your help in identifying the item.

Roger Craig wrote: ↑
Sun Mar 20, 2022 1:37 pm
To Don Zingg
The hollow bolt you show looks like what I recall the fitting in the motor presently in the car looks like. The picture looks like you have a nice, fresh, concours grade one. Did you find a source for one of these, or did you make it up yourself?

I made a bunch of these a few years ago. Sorry, all gone.
Email me for details if you want to make one.
Top

If you don't want to deal with the shortcomings of the original system, it's easy to convert to an electric sending unit and gauge that looks exactly like Don Zingg's bottom picture. I have no proof it's any more accurate, but it is a lot easier to install. Speedy got his at North Hollywood Speedometer.
Top

I AM INDEBTED FOR THE HELP I'VE GETTING FROM THIS FORUM. I AM NOW FACING THE NEXT PROBLEM FOR MY RECONSTRUCTION, VIX. THE CARB LINKAGES. MY CARB IS THE LITTLE MINIATURE SOLEX 32MM PBJ. ITS VERY SMALL, BUT I UNDERSTAND IT DOES AN EXCELLENT JOB. I HAD CARB RESCUE REBUILD THEM AND THEY LOOK LIKE LITTLE PIECES OF JEWELRY. THE PROBLEM I HAVE IS I HAVE NO LINKAGE PARTS. I HAVE ATTACHED A PICTURE OF WHAT I SEEM TO NEED. THE FIGURES ARE FROM THE 1954 PARTS BOOK FOR THIS CARB. DOES ANYONE KNOWS A SOURCE FOR THESE, OR PERHAPS DRAWINGS OR DIMENSIONS OF THEM SO I HAVE A CHANCE TO MAKE THEM? OTHER THAN THESE BITS AND PARTS I AM ON A GOOD ROAD TO FINISH THIS MOTOR AND PUT IT IN THE CHASSIS.

Roger,
I can probably measure the linkage for you. I might have an extra linkage that would be easier to measure. I would try to find one first and if you cannot find one we can get measurements...

Roger,
Stoddard used to sell a repro of the 32pbi carb linkage but I don't see it on their website at the moment. It might pay to give them a call and see if they still have them or if they will tell you the source where they got them (I suspect it was out of Europe). Where in the bay area are you? May have some parts you can measure and maybe some extra bits. Also I believe carb rescue has some of the small pieces for this linkage.
Top

Roger,
There was a VW Okrassa dual port head, dual carb, kit which has linkage similar to the Porsche. Wolfsburg West is selling a new version of that kit. You might check it out. I have their linkage myself on a pair of original Okrassa heads on a 36 hp VW engine.
Top

WHAT YOU SENT ME IS A GREAT START. I HAVE A CHANCE TO MAKE THE PIECE THAT CONNECTS THE 2 CARBS. I COULD USE A FEW DIMENSIONS. WHAT IS THE DIAMETER OF THE ROD? THE HOLE IN THE CARB LINK, WHERE THE ROD FITS IN IS 6MM. HOW IS THE ROD FASTENED IN? ABOUT HOW FAR FROM THE CARB LEVER IS THE LONG PART OF THE ROD?

I SEE THE LITTLE FITTING THAT CONNECTS THE THREADED PART OF THE ROD WITH THE OTHER CARB. IS IT JUST CONTAINED WITH A COTTER PIN?

I DON'T HAVE ANY DATA OF THE LITTLE BELL CRANKS. ANY DATA YOU COULD SUPPLY WOULD BE MOST APPRECIATED.

WHAT YOU SUPPLIED SO FAR WILL GET ME STARTED,

I AM DEALING WITH STODDARDS, PAUL, WHOM I USED TO DEAL WITH (10 OR 15 YEARS AGO) WHEN I WAS RESTORING MY 4-CAM. I WILL QUIZ HIM ABOUT THE FITTINGS. REGARDING CARB RESQUE. THEY GAVE ME YOUR NAME.

I AM IN CARMEL. I HAVE MIC AND WILL TRAVEL.