My brother bought a '53 Normal in '58 which had led a pretty hard life in those 5 short years. One thing I recall about that car was the tall Knecht mesh air cleaners were black rather than silver. I have seen other tall mesh filters for 32 carbs painted black with no evidence of having been silver originally. So my question is was there a period when the Normals had black air cleaners? Anyone seen period photos of black air cleaners?
Top

Hi Alan,
To the best of my knowledge the only black air cans on pre-A cars were the Knecht black VW mushrooms. According to Brett's research these were painted silver starting early '52. Other cars used Solex carbs, and presumably Knecht air cans too. Maybe Mercedes painted their cans black? I've seen photos of black mesh cans, but always assumed that somebody just painted them black. 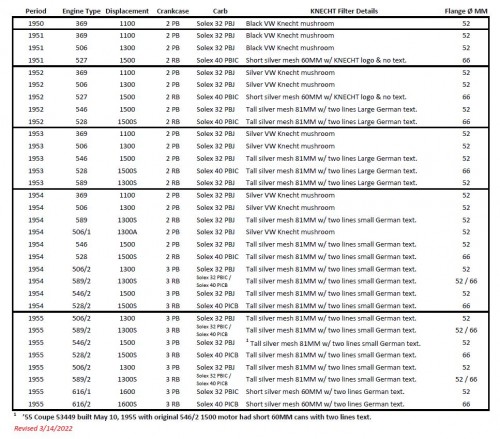 Thanks Spencer, I tend to think you are probably correct and if and when I re-do my brother's engine I will re-paint them silver. As I said his car had a rough life those first five years before he got it. It had been re-painted from black to red (which was already badly oxidized when he got it.) Bumpers replaced with VW on rear and a random U.S. car, DeSoto I think, on the front. Corduroy seats were covered with two sets of seat covers. Engine had thrown a rod and was in pieces.
Top

Martin, Yes he does....going to restore it one day he says.
Top

I have not seen black ones, except for ones that have had all their paint rubbed off via oiling. Certainly not black paint. Would be interesting to see your brothers'!

All the factory photos from 1952 onwards have silver cleaners for both mesh and mushroom. And the oldest photos of mesh cleaners from 1951 show silver too.
Top
Post Reply
6 posts • Page 1 of 1