I was just contacted by a restoration shop for advice. They are preparing a 1955 Continental which will be shown and the owner's representatives are maintaining that all 1955 cars had the rear panel raised for exhaust clearance. I have owned several original 1955 Continentals, none of which had the raised panel, though I have certainly seen some with the raised rear panel. My current Continental, 52979, which I bought from the original owner with 50,000 miles on it does not have a raised panel and has never been apart. Does anyone know what determined whether these cars had the raised rear panel or not?
Jim Wayman
Top

jim wayman wrote: ↑
Thu Nov 11, 2021 10:51 pm
Does anyone know what determined whether these cars had the raised rear panel or not?

Jim
As we have discussed here, when Porsche stopped using mufflers with flattened exhaust pipes in 1953 and began routinely building engines with round tail pipe mufflers, at that point in time the 356 tail panel needed that upturned edge for clearance. It is the standard equipment (muffler design) from that era that determined the required modification to the tail panel. Once the feature became established any deviation would have caused headaches for the mechanics on the final assembly line; and for the inspector who accepted the body. Now, what happened to any of those cars after they left the factory is a whole nether story.
------- 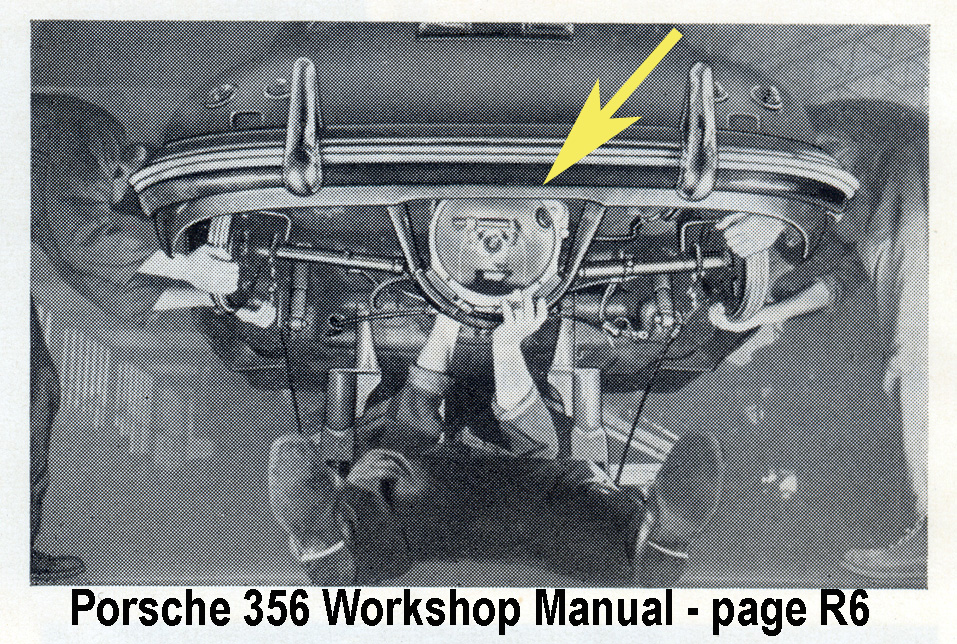 I also had this conundrum when restoring 54122, a mid Sept '55 bent screen, certainly one of the last RHDs produced, which had a rear end shunt in the 60's and it had been repaired by AFN with, as they put it and much to the disgust of the then owner 'an upgrade', to a T5 rear, which we replaced.
However we are lucky that we were in contact with some of the original owners, including the owner when this happened, and he and his family have shared a few photos and what he remembered prior to the shunt. Now these photos are just proud owner shots, not for forensic detail for restoration 60 years later, but I could not find any sign of an uplift & he didn't remember one either. I know absence of evidence is not evidence of absence but on the balance of probabilities I went with no uplift.
I had an interesting discussion with Brett about this, I'm also hoping Mike Smith's book/curation/catalogue on RHDs will be soon available, not that your busy Mike!! 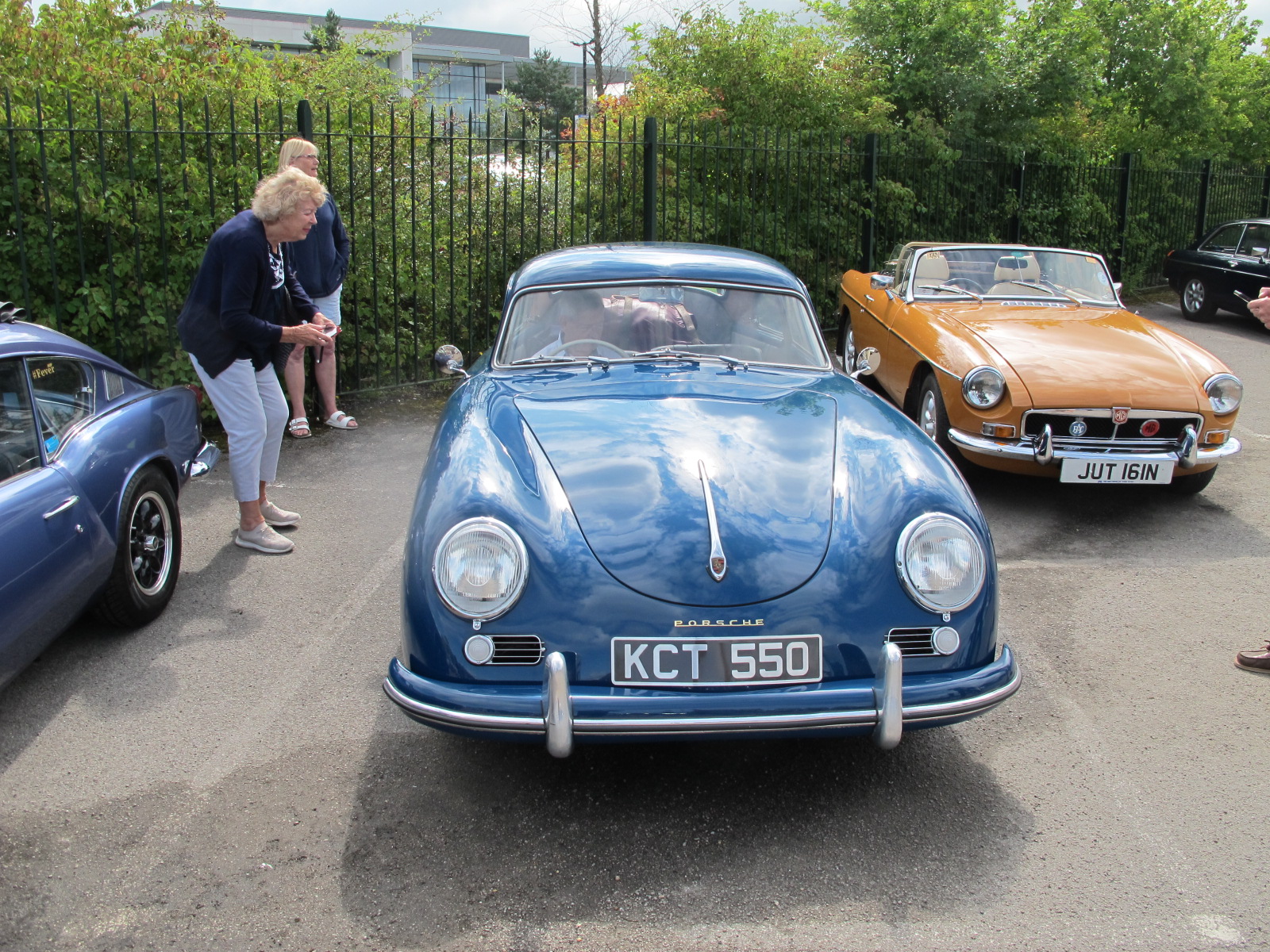 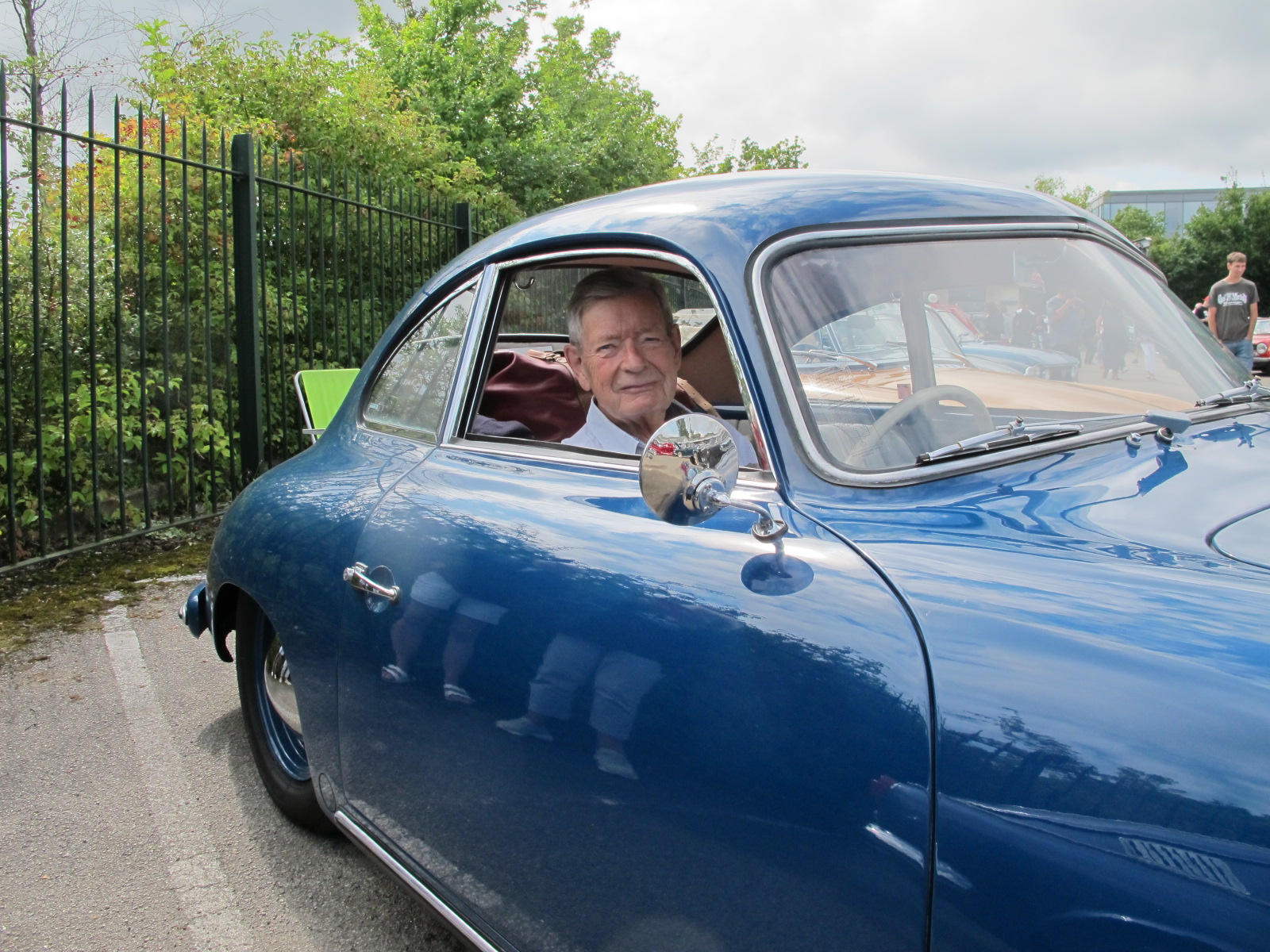 Yes, all had the raised valence for exhaust clearance, as Don indicates. It went away for the 356A not because the exhaust changed, but because Porsche raised the whole rear valence for the 356A, not just the center section. Raised center areas started in Aug 1953 and went through the end of 356 production, including Speedsters through Dec 1955.

Without the raised section, the only pipes that will fit under the rear valence are the flattened, angled ones used 1953 and earlier. And none of those exist anymore, nor did they exist in the 1960s when most of the owner memory of current cars dates back to. One often sees custom pipes on these low valence cars. But Porsche used standard pipes on standard mufflers.
Top

It makes sense that they were all the same. Given that, I have a car that doesn't have the raised panel and has its original tail. The original owner had to push it up a bit when he bought a sport muffler. I am the second owner and have all of the service records. How do I square that with the conventional wisdom? I also owned another 1955 that didn't have the raised panel. When I restored it, there was no evidence of any replacement or modification. I am puzzled! I know that this is not conclusive, but take a look at the Roads Scholar car, which is much acclaimed.
Jim Wayman
Top

I don't think there are many cars that have not had front or rear panels hit, or at a minimum had the lower valence on the front or rear hit by parking cement blocks, etc.

It is always difficult to figure out what has been done to a 40 to 65 year old car, especially if you're not looking for the thing that was modified or its not on your radar. I can't count how many times panels are replaced without owners realizing that the original panel has a different shape or locations of turn signals or exhaust cut-outs that are not in the later, available panel when the repair happened.

But the existing cars that have their original tail panels with the raised area above the exhausts span the range from Aug 1953 (coupe 51015) right to the end of pre-A production (coupe 54189, cab 60838) and dozens of existing examples in between.

Compelling evidence for the counterfactual that Porsche made both types during this period would be period photos showing such. I have seen none. Of course period photos of this area of the car is very difficult, as it is not visible from normal viewing angles.
Top

It is worthwhile to remember this was not a prominent feature originally formed in the sheet metal under the 356 tail panel; not so obvious as, say, the exhaust cut outs in a T-2 tail panel. It would have been easily mistaken for damage if other parts of the rear valence were being repaired. And after the upturned section was pulled down, you would have a uniform straight edge along the tail panel.

But something is missing whenever this topic is discussed - - - If your '54 or '55 P-356 does not currently have a raised tail panel, what steps did you take to solve the clearance problem between the exhaust pipes and the body? Sharing your experience could help other pre-A owners facing the same dilemma.
----- 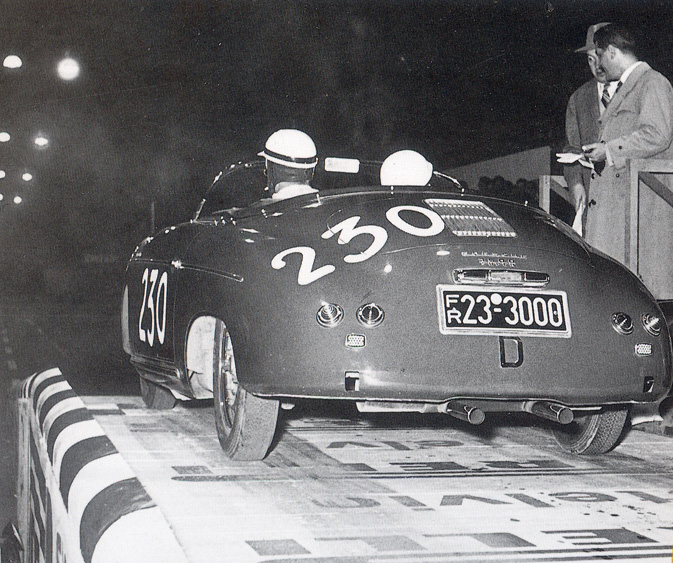 Thanks for your thoughts on this. I will have to take a closer look at my rear panel.

I knew as a bent screen it should have a raised bit and boy oh boy did I mull over all the points you make but with the Lieutenant Colonel's (who waxed & polished every inch of KCT and won the '62 PCGB concours) memory saying no lift, and yep he was the 2nd owner but there was no mention of a rear end repair, in the correspondence he had, prior to his shunt. It's also his photos we studied.
So with no evidence to suggest that KCT had this feature we didn't include it in the new rear panel, we think it's possible it was not originally present due to the fact it was so close to the end of the bent screen production & with the A model been on the line, perhaps?
Regarding the exhaust we have an unused replacement, purchased in the mid sixties, that came with KCT, it's noticeable that the diameter of the actual exhaust box is 10mm smaller and the pipes sit a bit lower than on the new exhaust we are using, in which we simply put a small down curve.
Where does this get us in the grand scheme of things, who knows but a little more info.............maybe!
V
V. Gillespie
Top

Jim, I looked this afternoon and looks like they edited the cutout of my june 1955 coupe at some point. in the photo you can see that there is a break in the lower lip 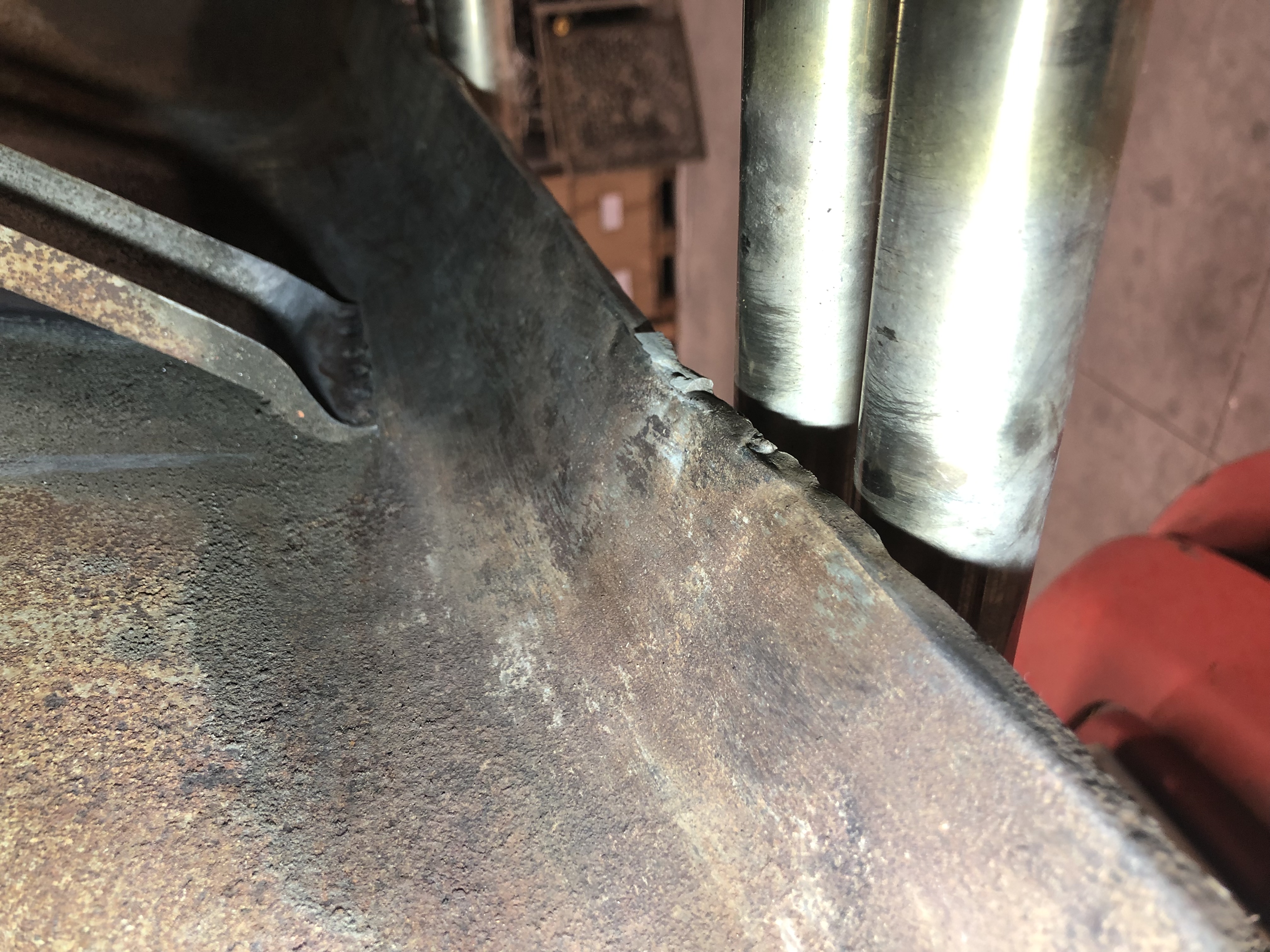 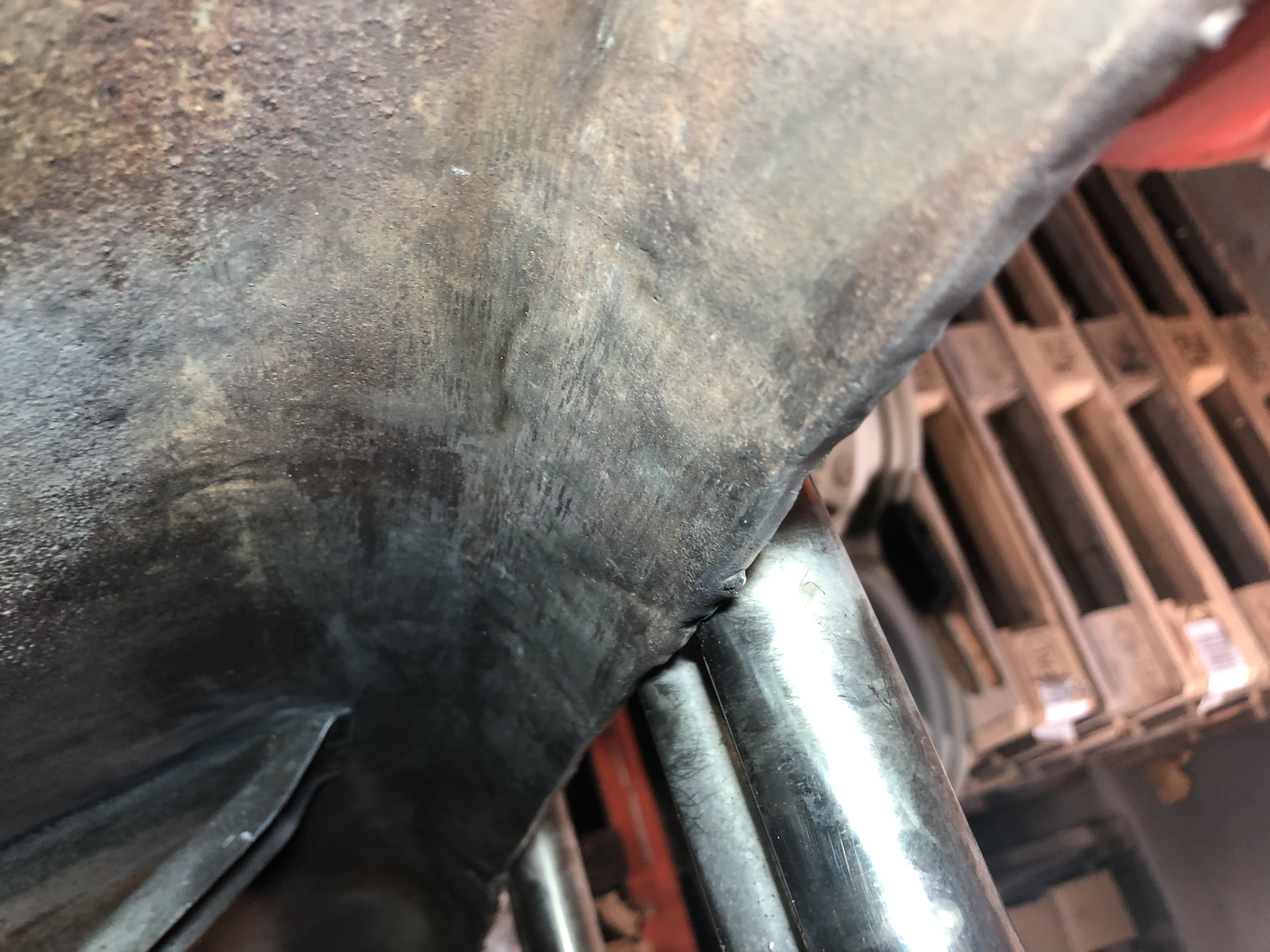 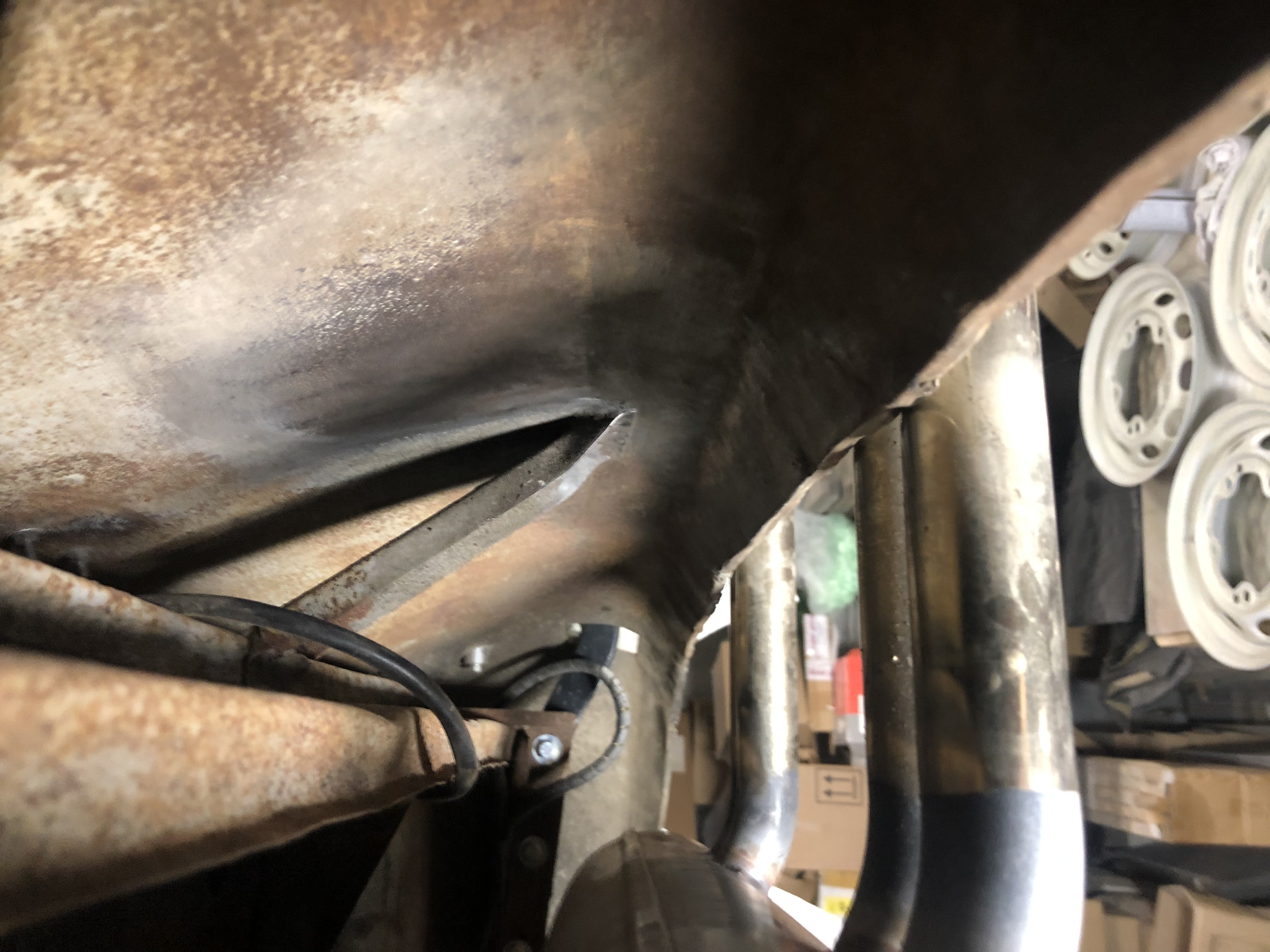 Hi Jim,
Did this raised panel thing ever get resolved?
Rick
Top

Thanks Thibaut. Nice photos showing exactly what body repair men who are not familiar with these cars from this short period of production will do when they "repair" them. =)

Looks like you've got one of those really cool Abarth exhausts, which fit under the old tail sections without the cutout. Make it work. =)
Top

And resolved? Yes, it's been resolved for years. Except people keep questioning it. 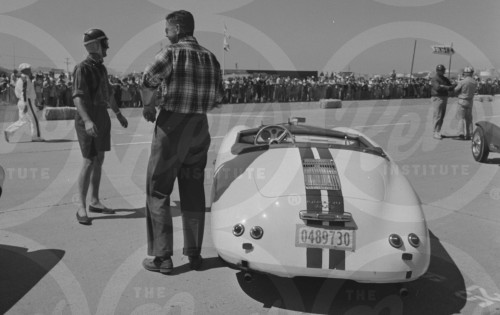 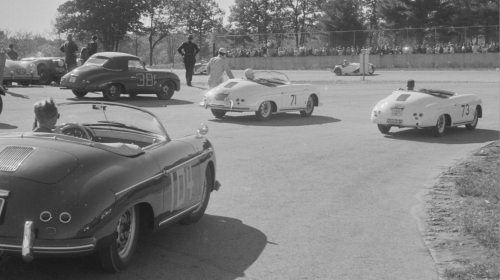 Here are two photos that illustrate what happens when the body repair shop is unfamiliar with that short-lived subtle feature in the late-pre-A tail panel - - - S.O.P. more often than not in the past 60+ years.
---- 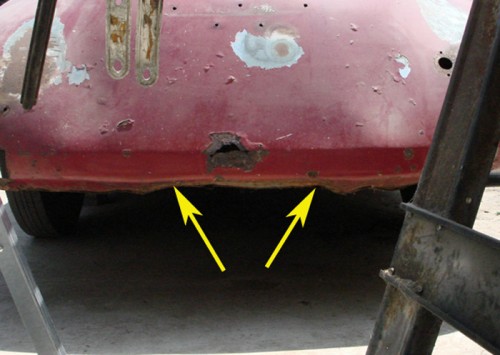 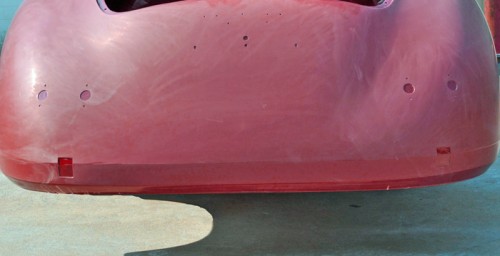