Since I appear to be the only Jim that has posted in this thread. I'm unclear as to your question. Please clarify.

Jim-
I believe Harlan is referring to John Brooks posts about the Element fire extinguisher being insufficient for use on our Porsche fires.

That makes sense. Harlan and I have been friends for decades. I loved his quote "or are you just whistling past the graveyard?"

John Brooks wrote: ↑
Thu Mar 19, 2020 3:52 pm
Don't put Halon 1211 on magnesium fires EVER, the decomposition and post combustion by proloducts are highly acidic. The acid developed by the 1211 will corrode everything. And the reaction in the flame front is explosive, a fine mist of water only, BUT NO CFC or HFC agents ever ok metals, maybe a powder, to remove the heat being transferred to other structures like wheel wells or fenders. Water in very fine droplets on magnesium or burry it in sand.

John, thanks for your wisdom on these extinguishers. Would you care to make a recommendation for early 911 owners (I'm sure we have quite a few Registry members who have both) with magnesium cased engines?
Michael Branning
356 Registry President/Trustee
Lexington SC
'64 SR Coupe
Top

I have both..
The magnesium in the transmission case is not a problem to be concerned with. Just keep the fuel lines fresh and the battery cable to the started connection and ground cables clean.

The car fire is most likely going to be a fuel leak or electrical short. By the time you can get the transmission case hot enough to burn, the interior will be gone and all the glass will brake. A normal 1211 ABC is fine. The car will burn for 10-15 minutes before the trans goes. Same with magnesium wheels, the tire will blow long before the wheel is involved.
John Brooks

I just ran across this thread. I saw a video regarding the fire sticks basically saying the same thing John Brooks said, just in a much less technical way so decided against them. That said, since I am completely ignorant about which ones to get, can someone recommend a good extinguisher to use in our 356s that fits within the specs described here?
Sebastian Gaeta
www.arbormotion.com

Sebastian, I have a Halon extinguisher mounted to the steering column where I can grab it quickly. They are available from Aircraft Spruce, but they aren't cheap.

https://www.aircraftspruce.com/categori ... /fire.html
Some days it's just not worth chewing through the restraints.....
Top

It has been illegal to own or use halon-based fire protection systems in Australia since 1995, except for approved essential uses (including aviation).
I doubt authorities will deem protection of a 356 an essential use.
What is the next best alternative?
Steve Newland
Brisbane, Australia
Top

I have one but it was in the back of the car.
After working on the car for a month I knew everything would be 'dry' so I primed my solex with gas and started it ...back fire caused a fire on the right carbs. The nearest extinguisher was a powder type ... which I grabbed and dumped on the fire - flames up around and over the engine lid

I forgot about the Element in my panic

Lesson 1 - I should have had the Element to hand, caps off and not in the car.
Lesson 2 - Powder makes a HUGE mess - engine is now out and I had to hose everything down - that sh** gets everywhere but it saved the car (and probably my house)
Lesson 3 - Priming Solex's - use a measured amount, funnel and BE CAREFUL - I didn't and wasn't - I spilt some gas which was my fault and my down fall, (and it didn't help that the fuel line banjo nut was not tightened so I was feeding fresh gas into the fire as the engine ran.
Lesson 4 - "Fiddling" with fuel issues - never assume you won't have a fire. I have never had issues before but this time I was lucky. Minor wire singe repair, carbon/smoke damage to clean off engine lid, carbs to rebuild and all engine tin off to clean the nooks and crannies and ... clean underwear required.

Last issue - I have never started and used an Element - but pulling a trigger on the extinguisher was instant which meant I could hit the fire before it got 'hot', would an Element have been as quick ?
Steve
'57 Coupe
'61 Sunroof Coupe
'79 911SC Targa (Stupidly sold)
BRZ on order !
Ford Diesel to haul 'stuff'
Top

Steve Newland wrote: ↑
Sun Aug 29, 2021 7:18 pm
It has been illegal to own or use halon-based fire protection systems in Australia since 1995, except for approved essential uses (including aviation).
I doubt authorities will deem protection of a 356 an essential use.
What is the next best alternative?

Halon is illegal in the UK too, Steve unless it's for aircraft or military use.

Lifeline Zero 360 extinguishers are a gaseous extinguisher. Available as hand held bottles or plumbed in systems, it's an expensive but popular alternative to Halon over here.

I am loth to comment on this subject as my views may be controversial. I have an emotional attachment to my cars but I also recognise that they are inanimate pieces of machinery until I poke them into life. They are insured, I maintain them, I try to make sure they are safe, I carry a fire extinguisher in each car. Having done all that the size of the extinguisher and its effectiveness is commensurate with the price of the extinguisher. You are now paying for extra insurance. I am however not going to risk my life putting out a fire, and the risk of a fire is really minimal in the real world. I have had one real carb fire which resulted in no damage other than to my pride as it was my fault just like with Steve's incident. Even Dave Wildrick's fire had a reason so they were not accidents in the generally accepted interpretation of an "accident" they had causes. Remove the cause and remove the accident. Don't do stuff that can cause the accident. I am all for safety, and carrying an extinguisher is a great idea but knowing how to use it is at least as important as the effectiveness of the extinguisher. Know how to use it and how to access it quickly. Place it where it can be accessed easily, and don't zip tie it in place!! If you have a carb fire use the fuel cock and turn it off, remember counter clockwise is off on all versions.
Get the fire out by any means then worry about the damage whether it be caused by the extinguishant or the fire. That is why you have insurance and why you don't want to be part of the fire damage.
I doubt I can be persuaded to buy a $300 extinguisher for each car which is what I would have to do to feel safe as I know I will not remember to keep switching the extinguisher from car to car. It will be worth it to some to buy the 3 or $400 extinguisher but after 50 years since my first 356 and only one small carb fire I feel I can trust my small cheap extinguisher from my local welding shop to do the job and stop me from cremating myself before I am ready.
I did a search on available car extinguishers and the one Mikwe mentioned which was I thought a somewhat exterminate price in the UK appears to be a lot cheaper here in the USA.
https://www.amazon.com/H3R-Performance- ... inguishers
If I had known I would live this long I would have pushed the envelope a little harder.
Cymru am byth
David Jones #9715
Top

Jeff Leeds got in touch recently, he was having problems placing this thread.

This is what he has done in his car, placement of the elements, a tidy fit.

This is my solution for mounting it. I have one on each side of my car. Easy to grab on the way out if necessary, and it’s in plain view from either side of the car. 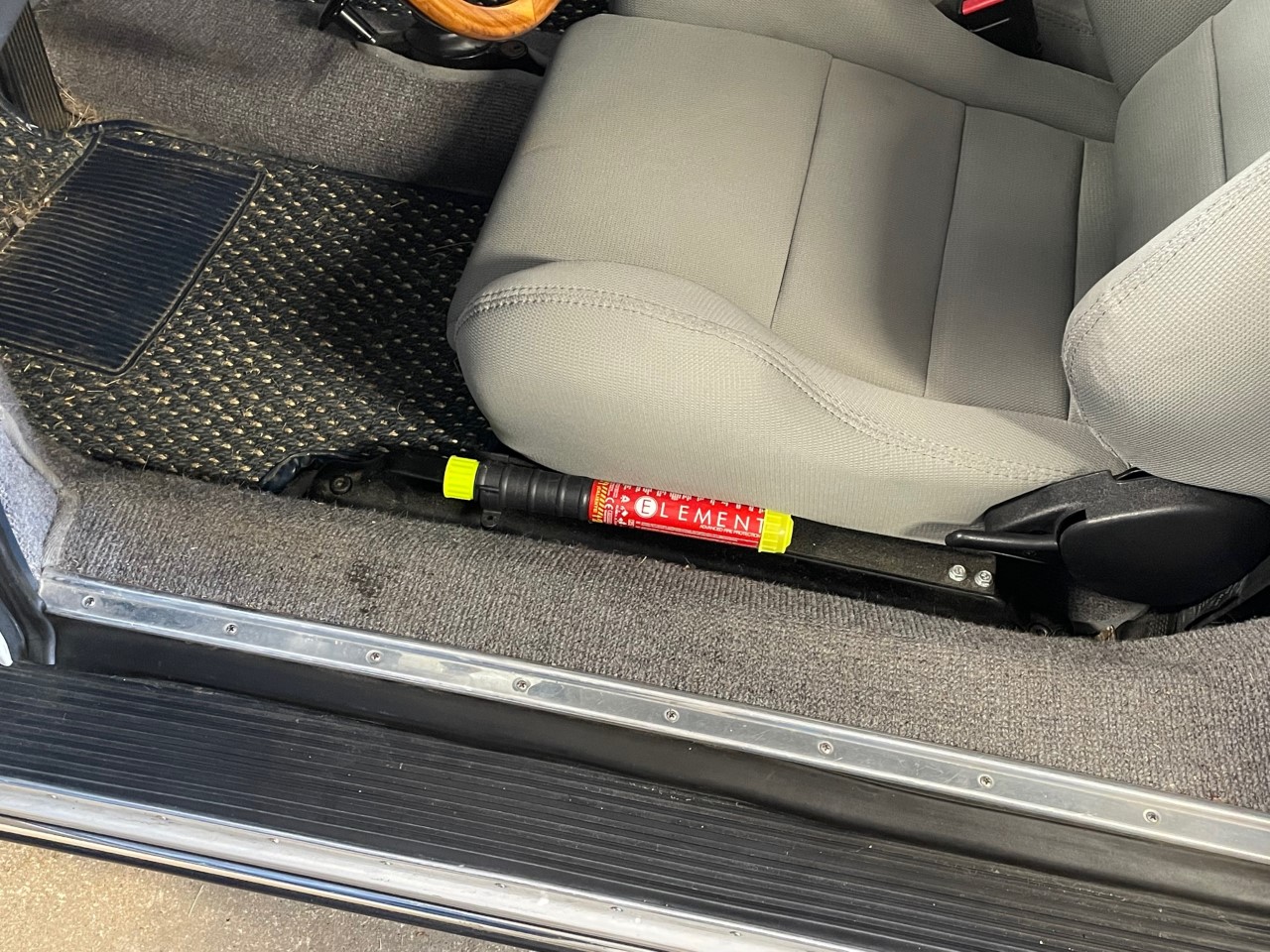