For those who obsess about exactly how their 356 left the factory!
Post Reply
21 posts
Message
Author

Harlan, folks with Rudge wheels are unlikely to care about performance so any comments on their effect on handling are moot.
Last edited by David Jones on Fri Jul 01, 2022 12:11 pm, edited 1 time in total.
If I had known I would live this long I would have pushed the envelope a little harder.
Cymru am byth
David Jones #9715
Top

I doubt if the handling is that much different under most conditions.
Terry, you actually could run wheels with other date codes, they’d feel much the same.
Cleveland Ohio
62 Cabriolet
56 VW
02 IS 300
04 Sienna
Top

The 356 'rudge' wheels were all made by Kronprinz, that is why they are not called Rudge on the Kardex. Rudge just owned the patent.
Jules 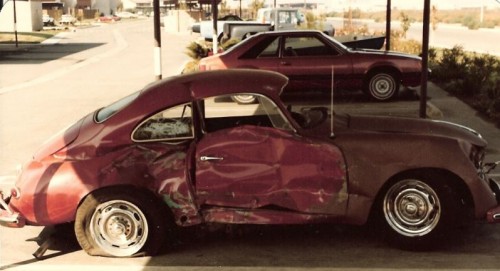 I have to ask, did that "buff out"?
I always need stories for my Barn Find column in the magazine, if you have a good story to share, please let me know.
Top

Nope, did not rub out. Had begun stripping the nose and Chevy driver without headlights on apparently did not see me enter the unlit intersection in Santa Maria, CA. I wound up in a front yard after being hit broadside and then in the RF fender by the same car. Engine and trans were bleeding from going sideways over the curb and I was bleeding from punching the windshield out with my forehead - I was lucky, eschewed an ambulance and one of the attending cops took me to the ER. Dash board was buckled, tub was toast. Got help from the PCA valuation guy that lived in Santa Barbara with data to substantiate value with the Ins Co. Bought the car back from the Ins Co and had plans to part it out (wind wings, wheels, Derrington, etc.), however I was a bachelor living in an apartment and they were giving me heat to get it off the property. A guy from Los Angeles contacted me about some parts I had for sale in the magazine (I think his last name was Moore) and one thing led to another. A few days later, he sent a truck and the entire mess was winched up onto the bed and took it away. Today, with all the replacement body parts available, might have been rebuildable, but this was 1982. Someone might be rolling on those wheels today, wish I knew if so and who...
STP
Steve Proctor
Member Since 1977
VIN 84757
Top
Post Reply
21 posts