For those who obsess about exactly how their 356 left the factory!
Post Reply
35 posts
Message
Author

I have been putting my 356C sunroof back together after installing the headliner. I didn't take it apart so it has been a bit of a puzzle, but have just about got it all back together. Luckily, a friend loaned me his sunroof sliding panel which has been helpful.

I noticed that the factory installed a piece of headliner material under the front clip bracket on his old panel. His material is old and curled so I'm not sure whether it should be glued down and how far forward it should go.

Anyone know and better yet have a picture or two?

I have included a picture of mine with the headliner material in place and his old one. (The material was sprayed with primer so it is a bit hard to see in the picture.) 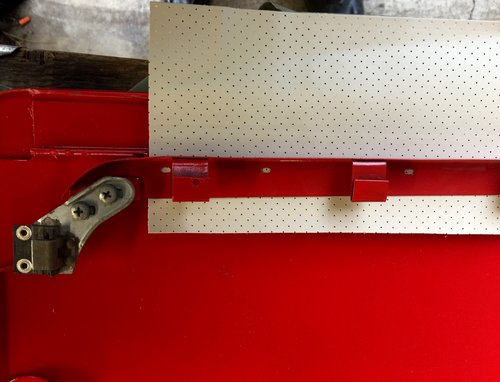 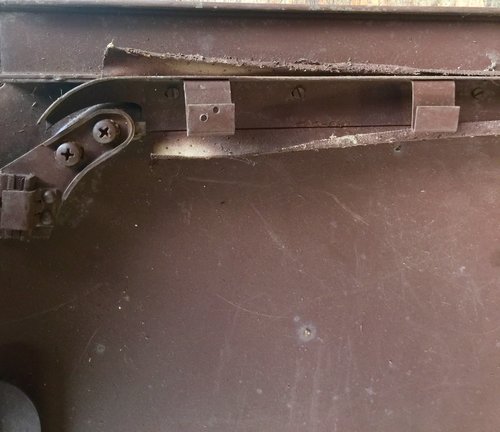 Larry,
When I rebuilt my electric sunroof it was complete and untouched from the p.o. But there was no sign of any stray headliner material.
So I must say, haven't a clue, unless it was used as 'shim stock' or maybe gasket material (like under the rear torsion rod access covers).
Steve Hatfield
Fort Walton Beach, FL
'63 S90 Sunroof Coupe
'06 997S Coupe
Top

Steve Hatfield wrote:Larry,
When I rebuilt my electric sunroof it was complete and untouched from the p.o. But there was no sign of any stray headliner material.
So I must say, haven't a clue, unless it was used as 'shim stock' or maybe gasket material (like under the rear torsion rod access covers).

It doesn't seem like it should be there to me either. But it was very carefully cut and placed by someone long ago. There is a good chance that it was added by someone when it was apart at some point - I did notice the extra screw hole someone drilled for securing the sliding headliner panel.

Which brings up another point. Is there really supposed to be a visible screw at each from corner of the headliner panel? I have seen them in some photos and not in others of T6 sunroofs. It looks a bit tacky to me, like a stop-gap fix. If so, should it be ivory, chromed or black?
Top

Also a "Golde" off white bulging-style rubber plug (with a Golde p/n moulded in the back side) was offered to cover the manually operated function, front center but very rare and hard to find.

This is the Sticky for your Sunroof posts. If you need Sunroof help, or want to help others with their Sunroof, here's the place. Photos, diagrams, parts available, substitute parts, anything everything Sunroof.
Thanks.
Top

Sunroof Inventory,
with References at the end: 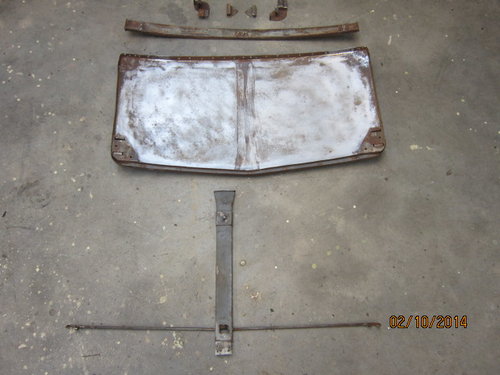 Glad there's now a section for sunroofs. I've got a '63 electric SR 356 B T6. Can someone provide pictures of how the front drainage tubing enters the dash from the A-pillar and where/how it exits the car? I've searched the forum without success. Thanks.
1963 B T6 Project
Top

John,
I have several sunroof drain pictures for my 1956 sr coupe but do not know how the drain may be same or
differ from later sr drains. Here are a couple of pictures, if you want more I can email them to you.
The original drain lines (at least early cars) are metal. Often an added sr has rubber lines. Press on the headliner
to feel the difference. The tube out the bottom is "rubber."
Bob 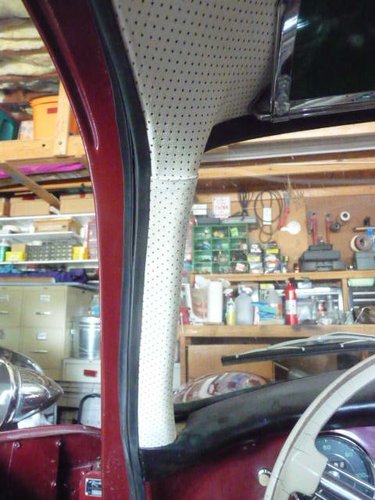 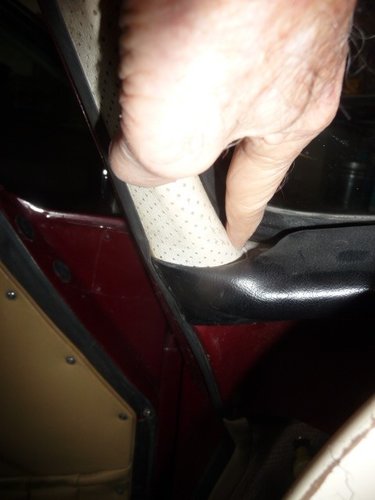 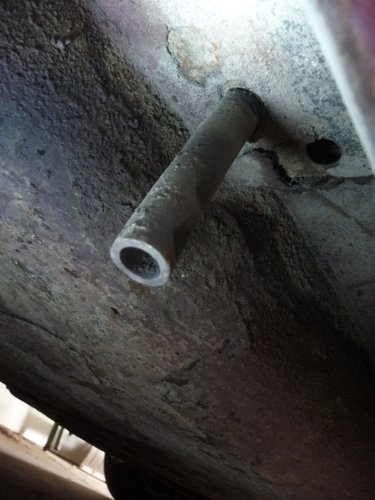 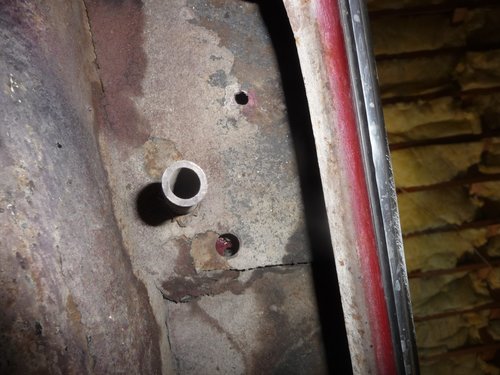 Great pictures Bob. I've got a later electric SR for a T6 so the hoses from the SR are rubber and go along the A-pillar then enter the lateral portion of the dash. I don't have any road maps beyond that. From you pictures it looks like the tubing probably gets into the door well then out the bottom of the car, like in your last picture. If it wouldn't be too much of an inconvenience, could take some pix of the door well, under the dash, and a wider view of the exit from the bottom of the car? It would be greatly appreciated.

Thanks and Happy Holidays.

Difficult pictures to get.
2. Under the dash: you can just barely see the metal sr tube, to the left of the larger (what I assume) round defroster tube.
The small sr tube is more toward the back of the picture/side of the car.

3. Can't see/feel much from the inside of the car. Where I am pointing I just feel a lot of curved metal.

1. Also, can't get any better/wider pictures from under the car. Concrete floor gets in the way.
If measurements would help I can do that. Inches or Metric?

At the end of the Sunroof Inventory there is a Resources section. Maybe there is something there that will help.
Is your car on the list? 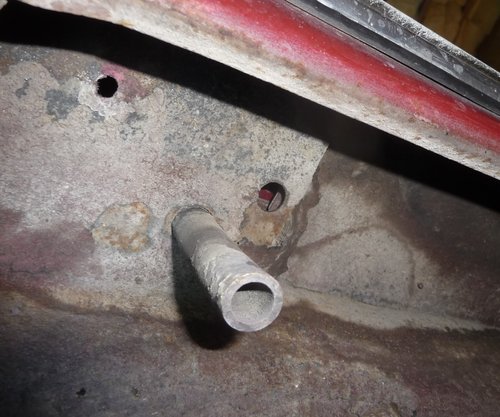 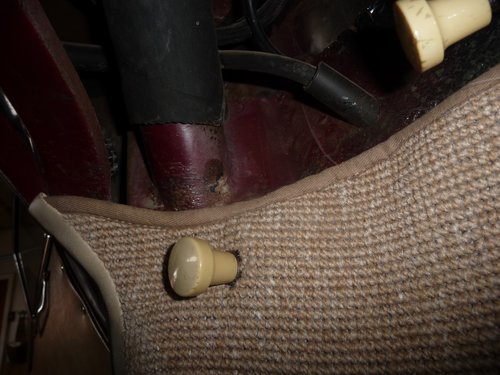 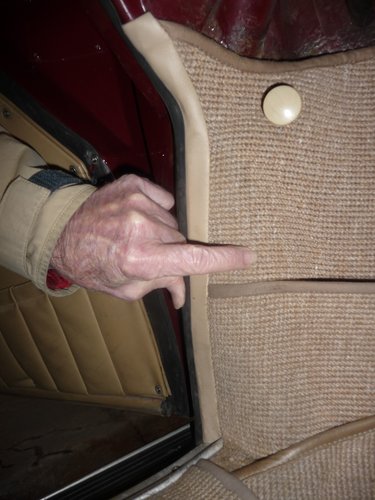 Thank you Bob for taking the time to take these pictures. They are quite helpful.