Jan and Jim, You quys are right on, it has the "60370" and "HELLA" at the top and the triangle with a number "4" at the bottom. (I never noticed those marks before!) No vestigial oval, the only lens I have with the vestigial oval is a VW with the VW mark. Wish I had a couple lenses with the oval but without the "VW" as that is what I need for my '53.
Alan
Top

I am trying to determine if these lenses are correct for a 56, and if not what are they? And does anyone have a pair correct they will sell...or trade. Have a number of good later lenses.
Roy Smalley
Texas
Top

Early 1956 model year lenses are the same as 1953-55, with the "vestigial oval" and a small Hella logo at the bottom. Sometime during the model year, the vestigial oval disappeared, but otherwise the lens was unchanged.
Jan Kolm
356 Registry #1066
1960 1600N Coupe
Top

Thanks Jan, appreciate your response.....a truism if you have parts is "you will need it later". I rarely sell parts for that reason, but sold the set above to a nice guy that needed them then for a 53 plus they had been in a box here for at least 20 years so what the heck. Now I need them...but hopefully some will show up.
Roy Smalley
Texas
Top

Hi Roy, the '53 headlights had Euro fluted lenses on them, which are pretty common (see photos further up in this thread). The very rare sealed-beam lenses had been swapped out at some point a long time ago. The early '56 sealed beam lenses were like the '53 sealed beam lenses - not fluted, but clear glass. Very rare. Everything else in the assembly for the '56 headlights is different from the '53 ones - adjuster mechanism, chrome ring, etc. So none of those parts would have been useful for the '56.

It will be virtually impossible to find correct sealed beam lenses for the '56 car unless someone reproduces them. (Someone should!) The rest of the assembly should be pretty easy though.

The Hella sealed beam headlights were unchanged (bar the lens) from '55 through at least '58. Maybe later? Jan will know. Look for an assembly that has xN or xM date codes. See photos below of a set of late '55 headlights dated the 38th week of '55. Of course they have the incorrect lenses in them. =) 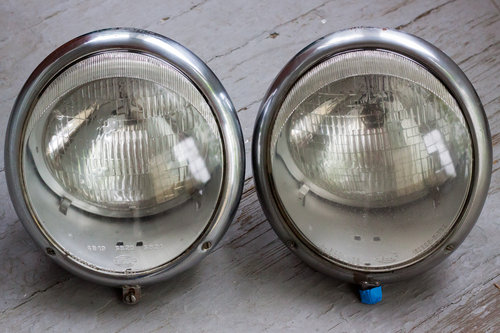 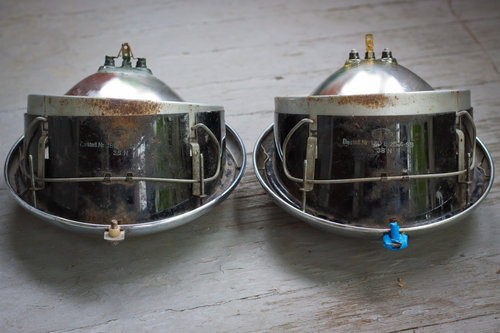 This is an early '56 headlight with original lens. You can see it has the same spring mechanism as the '55 ones above, with the two pegs in the bottom of the bucket. And it has the '53-56 clear lens with the vestigial oval. The '53-54 sealed beam assemblies are immediately recognizable by having only the one drain hole, not the extra two holes forming a triangle in the bottom of the bucket is it doesn't use the same spring mechanism for the adjusters. See photo below. 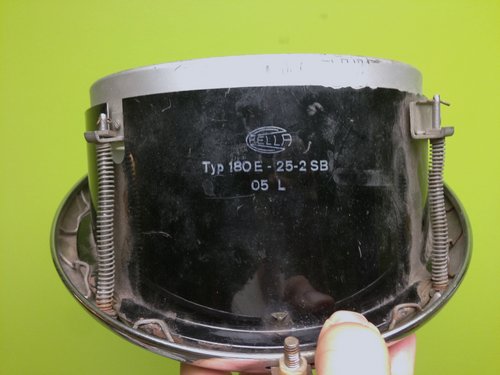 Paul Hatfield wrote:Here are photos of one of the headlights from Miss June- 65 C coupe with production in 1964. It is cut off in the photos, but the headlight is made with 2 rivets, 2 & 8 o'clock for adjustment screws. Headlight retained by straight slot screw, not Phillips.
Back side of headlight shows date code of A27 (27th week of 1964).
Glass markings are all raised above the glass- on the front face of the glass.
28-60370-03
MADE IN GERMANY
HELLA
SB19 SB20 SB21


I have the same lights with markings as Paul shows on page 1; I've got a 64C and I'm missing the little block off plate shown in this photo for the 65C lamp. Can that be reproduced? Is that common? I've seen another 64 that didn't have the hole at all and no need for a block off in the lense/bucket. I only have one lamp the has the hole and the need for that little hole cover.

My unrestored late 62 build RHD obviously has had its lenses replaced earlier in its life due to stone damage in a rally or gymkhana. They are both using the slotted screws but have Bosch lens. This is seemingly not 'correct', unless Australia received different lenses, which I doubt. This is the challenge of unrestored cars I guess. Do you replace such items or accept them as part of the car's past?

Yes, the Bosch lens is shown incorrect in a Hella bucket assembly; it should have the adjusting screws
@ the 9 & 12 o'clock position. There are @ least 2-versions of Bosch lenses having 4-digit #s near the center.

Actually, these do appear to be post-1960 Bosch asymmetric assemblies for the RHD market (the tab on the rim is more rounded than Hella). I realize the parts book only lists symmetric lenses for RHD markets, but Australia may have required asymmetric lenses before the UK did. The date codes (if any) off the backs of the reflectors will help answer this question.
Jan Kolm
356 Registry #1066
1960 1600N Coupe
Top

That is definitely post 1960. Here is the Bosch lens from what was once my May 59 T2.
Note the different script.

I have only ever seen Bosch lenses. Hendrik, my lenses on a RHD delivered Australian (62BT6) car has the adjusting screws as Jan says "@ 1-1/2 & 7-1/2 position". The two lenses are different however. One has the BOSCH in all caps (on the LHS) and has but one number on it 1023. It has some quadrants in it to probably accommodate the light direction towards the LHS.