For those who obsess about exactly how their 356 left the factory!
Forum rules
Post Reply
14 posts • Page 1 of 1
Message
Author

Are there any identifying marks or date codes to be found on the back of ULO reflector? I've seen: It appears that some SWF parts were date coded, but I've not found evidence for the rear 356 reflectors. Starting 1960, it appears they are all ULO

Thanks to some very informative threads on the forum, I think I've determined: Did I overlook anything, or get something incorrect?
- In my original post, I referred to SWF, which would have been pre-1960 according to Dr. Johnson. So not applicable to this thread.

Dennis: I seem to remember either a thread or an article on the topic of reflectors.

Mike Wilson wrote:Dennis: I seem to remember either a thread or an article on the topic of reflectors.

There are a few reflector threads, and I've linked to the ones I've found in my original post. They focus on the front plastic side. I'm not seeing any information regarding the back. Maybe there's no stamping or date to discuss? Though the difference in Stoddard and Aase offerings has me wondering...

All the original ones I’ve seen also have those markings on the back.

Please note though, on the original ones I have, the posts are not the same heights. Ones that go above the bumper have a post a little over 1.65cm long, and below are a little over 3.3cm. Perhaps the long studs work in the top base, but doesn’t appear to be original. Also, the ones that go above, have a chrome locking nut, part # 64473151505. 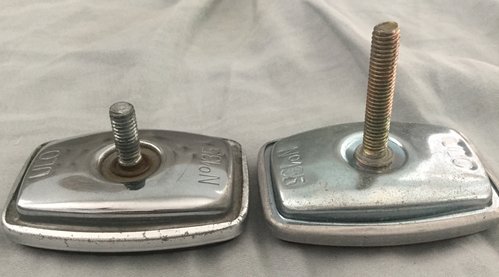 That is an interesting detail Mario. Can those studs be interchanged?
1960 356 S90 Sunroof Coupe
2014 Carrera S
Top

I'm sure there is something obvious I am missing, but here goes an example. I've purchased two reflectors. Both having what I'll call the T1 markings as found in Brad's drawings. The earliest sunburst ULO center with the fewest markings on the plastic lens. Both presumably original given the wear, and I've not seen reproductions made with the early sunburst lens. One with markings. One without.

Has anyone had success in refurbishing their original reflector?
1960 356 S90 Sunroof Coupe
2014 Carrera S
Top

Hi Mario
I have some with the longer stud. I believe according to John Chatley( if I recall correctly) they came on some Convertible D's.

Dennis. Victor Miles does restoration on the glass reflectors. Not sure what he can do with the plastic portion but he does re-chrome the bases and bezels and re-assemble. Brilliant work & his info is in the vendors section.

I do not believe A cars came with ULO reflectors but who knows.
Jules

Jules Dielen wrote:I do not believe A cars came with ULO reflectors but who knows.

Must have been "some Roadsters"

Jules Dielen wrote:I do not believe A cars came with ULO reflectors but who knows.

Brad,
Thanks for the link. The drawings you did were really helpful.
I did search to see if there was an answer about the back of the reflectors, and was unable to find anything definitive.
I have an old original pair that has the #2 sunburst on the front and no markings on the back (like Dennis' picture above).
Thanks again
Top
Post Reply
14 posts • Page 1 of 1