That's not good for originality, but could happen on vintage cars.
It could affect and compromise the regular functionality of the engine?
Which impact could have on the value of the project?

Not sure about the impact on the value of the project. The engine is basically the same as the original SC engine. If someone had put a much older engine in the car, it wouldn't be as good however. If your intention is to restore the car to a fine condition and to enjoy driving it, the engine will suit the purpose. If your sole intent is to make it exactly as it came from the factory, that is no longer possible. You might try to check back through previous owners and try to find out what happened to the original crankcase. You have the third piece (the timing cover) which has the original serial number, so that number of engine shouldn't exist elsewhere.
Some days it just isn’t worth the hassle of chewing through the restraints......
Top

Many thanks, I would restore to originality as much as possible, but not at concours level as I like to use it in my traveling. But a 912 case, will have some differences, i.e. the flap heat box are not exactly the SC model and so on. This will be a pity. Any chance to find an SC correct missed parts?
Top

That 912 case probably has the SC /C flapper boxes if it was installed in the car when you got it. If the job was done correctly, they would have reused the original SC external bits.
Some days it just isn’t worth the hassle of chewing through the restraints......
Top

Unfortunately we have here the cooling box of a 912 (no thermostat holes) and the flapper boxes have only one flap... That's not a good start for the new year and the project. But the car deserve a quality restoration anyway. I think I will need some helps from you experts on how sorting the problem. Any suggestion is welcome.
Top

I see the rare electric windshield washer listed for your car in the Vindb. Very rare.

One other item about the 912 engine case; the lower engine mounting studs are longer, and sometimes the nut stops on the un-threaded part of the stud and does not permit proper tightening of the engine.
Top

Maurizio sent me the following questions which I thought best answered here. Hopefully others will chime in with their thoughts. As I explained to Maurizio, I don't consider myself an expert on these engines. There are many on this forum with much more knowledge than I.

1. The 2/3 of the original engine body are gone in past era. The 912 parts
are the replacement of a seriously broken engine? Probably yes.

Answer: You are probably correct. We don't know exactly what happened to the original engine,
but it was probably easier to source a new crankcase than repair the old one. The 912 and SC crankcases were virtually identical, with the exception of the numbers. By reusing the third piece, the original engine serial number was retained.

2. If properly installed, will the engine will run fine? Seems yes.

Answer: If it was rebuilt properly and is installed properly, yes.

3. Are there any issues or details that should be incompatible or modified
to have the 912 parts work as an SC engine?

Answer: The basic case halves should work without change, except as Vic has noted that the lower mount studs (that go through the bell housing) might be a little too long. Adding a washer or two to make sure the nuts don't reach the end of the threads would easily solve that issue. On the other hand, the ancillary parts that you have may not be correct for an engine with the European heater system. (You indicated earlier that you thought the heater boxes were for a 912. Is it possible that they are for the European heater system?)

4. Reinhold suggest to ask you if you have a database of production numbers
punched, and help us in finding one compatible with the engine # so we can
at least try to giving a chance to looks at it should.

Answer: We know that SC engines with the European heater system had serial numbers in the range of P820001 - P821855. The serial number on your third piece, P820459, indicates that it would have been installed in a car late in 1963 or early in 1964. Finding an SC engine with a serial number close to your number of P820459 might yield a case with the engine assembly number CLOSE to what should be in your car, but it would still not be exactly correct. As far as I know, the factory did not keep a record of engine assembly numbers. It may not be worth the effort or expense of trying to find something close to what should be in the car.

Cheers,
Wes
Some days it just isn’t worth the hassle of chewing through the restraints......
Top

Although the factory didn't list engine assembly numbers, Harry Pellow tried to get members to send him information on their engines. He called them casting numbers. He compiled these and put them in some of his books. Your engine assembly number, 114721, is between 114676 (which Harry says is the highest number in his 616/39 engine range) and 114967 (which he says is the lowest number in his 616/40 engine range).
Some days it just isn’t worth the hassle of chewing through the restraints......
Top

I have an old list from Pellow. Seems that the assembly numbers were all over the map in regard to engine serial numbers.
Best I can figure out, your 820459 might have had an assembly number anywhere from 84165 up to 86896; maybe.
Good luck.
Top

Dual flapper boxes would be correct. 912 boxes can be modified to work. Sounds like yo7 have what I call a bitsa motor. Bits from this bits from that. https://porsche356registry.org/classifieds/18668 is the setup you need.
1965 356C There is never enough time to do it right, but always enough time to do it over.
Top

Actually, Doug, I think that the European style of boxes would be correct (as original). The serial number of the original engine in the car indicates that it had the European heater option. When the 912 crankcase halves were substituted for the original ones, we don't know if there was any attempt at keeping that heater option. The fan housing doesn't appear to have the snout that the European heater would have used. Maybe it became a "bitsa" engine at that point.

(Am I correct in assuming that there were possibly three variations in heater boxes? Stock SC, stock 912 and European heater? A photo of the boxes on his car would help.)

In any case, it would appear that Maurizio has all the makings of a very nice, well appointed car. So what if the crankcase had to be replaced at some point in its life? That's all a part of the car's history.
Some days it just isn’t worth the hassle of chewing through the restraints......
Top

Yes Wes the fan housing he has is for USA heater system. That is why I mentioned dual flapper 356 or modifying 912 flapper boxes. Euro heat system would be way too expensive if parts could be found I think.
1965 356C There is never enough time to do it right, but always enough time to do it over.
Top

In the meanwhile that we are searching for original parts to be "matched" with the third piece in order to restore the engine to his original state I had get the kardex.

Surprising, turn out that this is a true German car, dealer is still in activity and the formal owner seems to be still with us.

I have not contacted him yet, I don't know if is appropriate. What is your experience about this?

Another question for the experts: you can read that the car had been in service to the dealer for some years, someone is able to decipher the "service code" (i.e. understand which service was done, like oil change or whatever else?).

I like the project even more, I just hope that I can restore it at best of my possibilities, with the kindy and unvaluable help of this comunity and some friends in Italy and as well all around the (356) world. 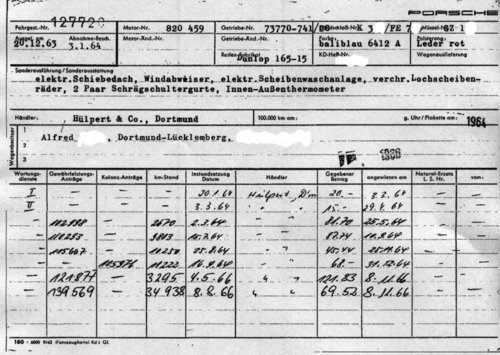 During your engine parts search you will need to decide if you are going to try to return to correct for your car European heating system. If so you will need the correct type fan housing for European heat as well as all the odd sheet metal and heat exchangers for the European heater system. Depending on how your search goes it might be cost prohibitive to return to Euro heat even though it is correct and puts out much more heat. Stoddard does have a new right side exchanger listed but the cost is troppo caro : http://www.stoddard.com/61621102200.html No left side is listed.
1965 356C There is never enough time to do it right, but always enough time to do it over.
Top
Post Reply
38 posts