The post in the main section by Toby from Australia (viewtopic.php?f=1&t=43031) asking for help in identifying his early 3 piece engine case is very interesting as I had been looking into this recently. Rather than hijack his thread, I started this one which is an attempt to document some peculiarities in the early 3 piece engine serial number stamping. To say that Porsche hadn't thought this through carefully is an understatement.

I had not seen an early 3rd piece like his (below is a photo of Tony's engine). Although the stamping is only on the generator stand, I suspect Tony's stand and 3rd piece were originally together, else there would be half of a stamping on the 3rd piece (see below). This is likely the first version of the 3 piece case serial number marking. Obviously just stamping on the removable generator stand is not a satisfactory way to track engines for warranty purposes so I suspect this was extremely short lived. 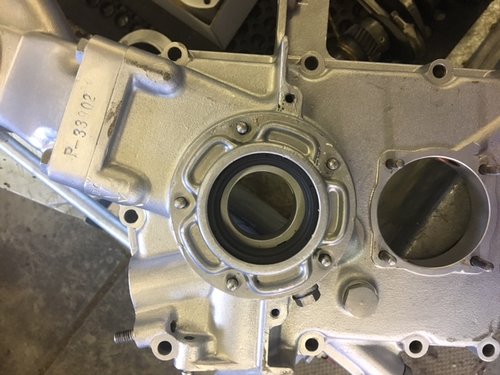 Next, we have my engine, out of a '54 production Speedster with an early 3 piece case which I have always found unusual. The provenance of the car is excellent and I have no doubts that the engine is original to the car and unmolested. Porsche's solution to the engine serial number warranty tracking problem was to stamp the number half on the engine and half on the removable generator stand since there wasn't enough room on the newly designed 3rd piece for the entire height of the stamped numbers. However, upon looking at the serial number on my engine closely, one may wonder if something fishy is going on with all the grinding marks? 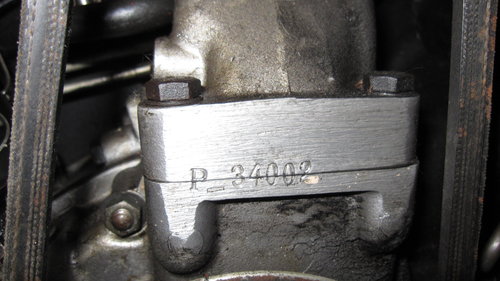 Everything told me that the grinding was done at the factory. I mean, really, who would try and re-stamp an engine in the correct way with the correct font and leave grinding marks like that. Not to mention that on this car, it would have had to have been re-stamped before 1959 as that is when the previous owner acquired it. Although I was absolutely convinced that it was a factory stamping, I was on the lookout for another similar stamping. I was conversing with Don Zingg about this subject some months back when amazingly, an engine shows up for sale in the classifieds section which was exactly what I was looking for... i.e. CONFIRMATION! 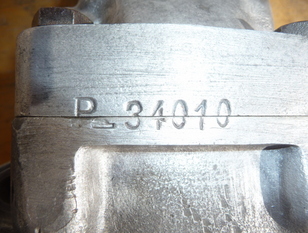 
Then, Don finds a photo of another engine with similar grinding marks. Notice that all of these engines do not have a TDC mark. 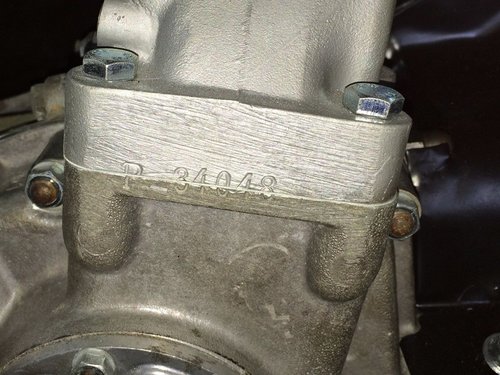 Next, Porsche changed the generator stand so it is reasonably flush with the new 3rd piece on the engine, eliminating the extra step of grinding the surface before stamping the numbers. 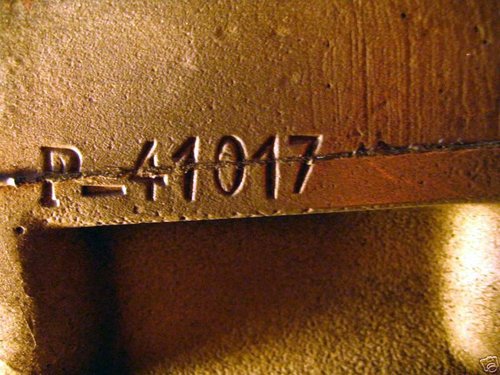 Finally, a new 3rd piece casting with enough room for the entire number AND, thankfully a TDC mark. Note the single star at the end. 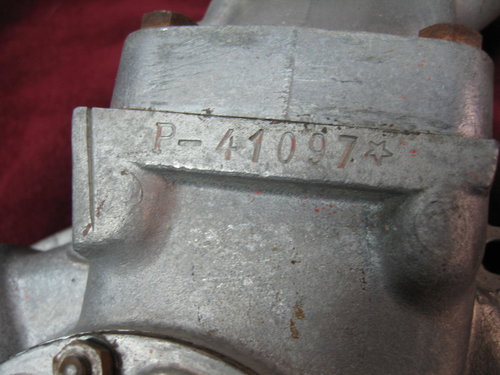 I Just thought it would be good to document what Don and I found as I had not seen such documentation on the variations of the early 3 piece engine serial number stampings, particularly regarding preparing the surface by grinding before stamping on some early engines. If you have more information, please share.
Last edited by Chuck House on Thu Dec 22, 2016 12:45 am, edited 1 time in total.
Chuck House
Southern California
Top

On 546/2 Normals the trailing star was added somewhere between 34194 (no trailing star) and 34281 (with trailing star). This was discussed a while back regarding '55 engine numbers.
Top

Here is a photo of engine P-34132 from the (Dec. 1955) 356 Speedster driver's handbook.
The engine shown originally was assigned to a Speedster built in late-December 1954.
Note the ignition timing index groove on the third piece casting, and the placement of the serial number compared with earlier engines shown above. 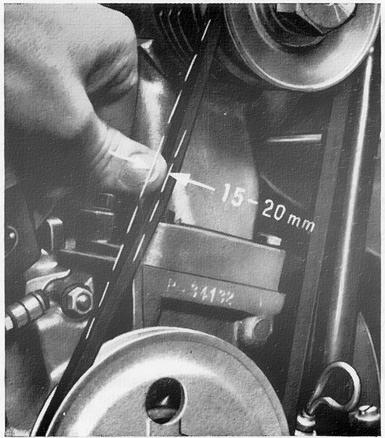 Jules, Any chance you can post a photo of that engine, seems late for a number split between the stand and 3rd piece.
Top

Wanted to post these pictures of an early engine I have and had some doubts about. Engine number shows to be a '55, P34127, no star, all three case numbers match however third piece number is in an odd location. Fonts match. Also, now curious about the casting number on the bolt boss showing a lower number than Toby's (who started the initial thread) and yet a later engine number. Can anyone help straightening me out on this? 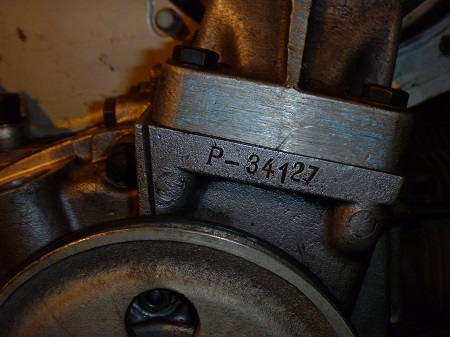 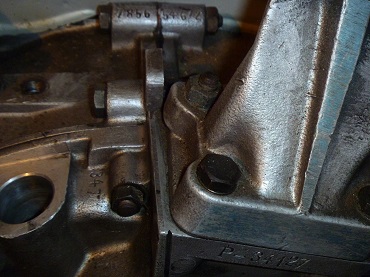 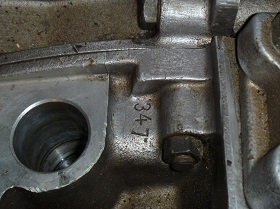 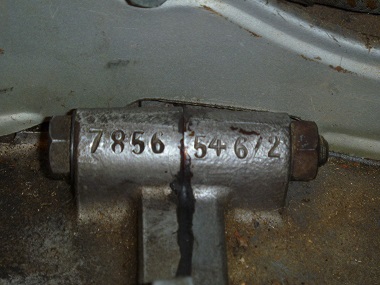 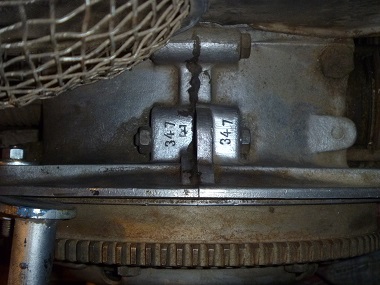 The stampings on your engine are consistent with what has been documented for one in that serial number range. Everything looks correct to me.
Chuck House
Southern California
Top

Chuck, Thanks for you input on my engine, I am pleased that it appears to be legitimate. I still have a few questions however. In the examples that have been presented, we have a picture of my engine 34127 numbers on the third piece and yet engine number 41017 still shows the stamping split? Where did you get the picture of this stamping? Zingg's attachment from the drivers handbook does show the engine number(5 after mine ) on the third piece. Secondly, I personally have not seen another case matching number below the usual stamping "table". Can anyone else provide a picture of a similar stamping? I am also curious about the letter E on the front case half. Finally, I have not reviewed the information on the number to the left of the 546/2 case identifier but would think the 7856 on engine number 34127 would have been higher than the 10041 on Toby's engine number 33902. Thanks for any information anyone can provide.
Top

These engines were produced in the factory together and only differed in specification (1500 vs 1500 Super). The internal number (7856 on yours) is the sequential number given to all engines Porsche built, regardless of type. It correlates well with date.

Thank you James for this information and confirmation. Can anyone direct me to the route to find out, if possible, which car this engine was initially installed in? I am not needing this engine, (it needs a rebuild and should be considered a short block) and I would like to start a restoration on my cab., if it has some value to the owner of the original car or others it is available

Hi Andy, in the main discussion area there's a thread for posting engines available or wanted, with the purpose of reuniting them with their original car.

I posted a 546/2 engine I've had since the 1970s on that list a few years ago, and just a couple months ago reunited it with its original car. I didn't even know the car still existed. The owner was very pleased, to say the least. So it it does work! =)

As for finding out what car your engine originally went to, that's pretty much impossible. You have to get lucky. But putting the number out there will allow a car owner who wants to find the number to find it with a simple Google search.
Top

Hi Chuck,
Thanks for the info on split stampings. A couple of years ago I sold a 55 RHD pre A which needed complete restoration, this came with engine casings but no generator stand. I always assumed someone had machined or ground it down as it just had the half stamping.
Does that mean the engine must have been from an earlier car, the numbers were hard to make out as there were just the half stamp.

Rob DuBerry wrote:Hi Chuck,
Thanks for the info on split stampings. A couple of years ago I sold a 55 RHD pre A which needed complete restoration, this came with engine casings but no generator stand. I always assumed someone had machined or ground it down as it just had the half stamping.
Does that mean the engine must have been from an earlier car, the numbers were hard to make out as there were just the half stamp.

From your description (i.e. 3 piece engine with only half the serial number on the 3rd piece), your engine sounds like it was built in Dec '54, which would be for a '55 model year car.
Chuck House
Southern California
Top

Thanks Chuck,
That makes sense of it.
Rob
Top
Post Reply
22 posts