Was getting my '55 Speedster (80333) ready for next years show events and suddenly realized that my tool kit was an early A!
Since a factory Pre A tool kit, in concours condition would cost me as much as my house, I decided to go for a Repro. Question is, since I have a Vigot jack in my car, do I get a '52-'54 type (with the hammer) or the later '55 type that has a Jack Handle and is vinyl? This question was addressed in the forum several years ago, but it was never answered. Seems logical that if the factory installed a Vigot jack, they would not sell the car with a "jack handle" later type?? Does anybody know for sure these days?
Ben Sherman
'55 Speedster
'59 Cab
Top

Here's a period photo of a tool kit for a 1955 pre-A Speedster (Sports Cars Illustrated magazine)
Also, a photo of an incomplete OEM kit from a December 1954-produced Speedster. The pouch is vinyl.

A hammer in an original pre-A Speedster tool kit? It would serve no specific equipment-related function.
During normal operation and routine maintenance there aren't any fittings or features on a pre-A Speedster that need to be struck with a hammer. 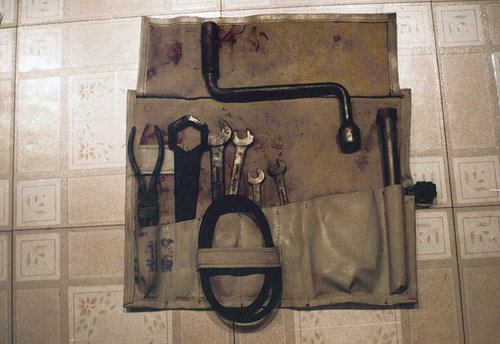 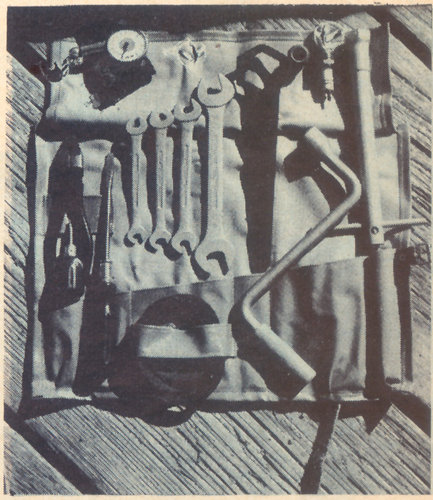 Don, great to hear from an expert. I still enjoy your book, which I did consult to see if there were any trunk/tool kit pictures (no, unfortunately). I am a little mystified by it only having 7 pockets rather than 8 as specified by E Cherneff on his website?
Ben
Top

I believe the change from red canvas to grey vinyl tool bags occurred some time in 1953.

We are doing a '55 Speedster at this time. I went to Harvey Rosenthal for a Repro. kit. He is a great source, and knows what he is talking about. The bag is Red cloth.

Here is Harvey's photo of the tool kit he offers for later pre-A cars.
His replica tool kits are positively gorgeous and a terrific value.

Ben, if you go this route ask Harvey to omit the lever for the friction jack.
You'll be good to go:)
Have fun! 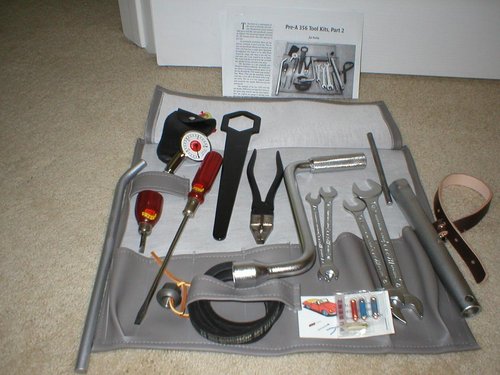 Ben,
When I bought my 55 Cab, 25 plus years ago it had an early "A" toolkit in it (light green bag). It is a late production Cabriolet and I wondered if the kit was correct. I questioned could a late production car possibly have a kit from the following year as the company transitioned to the newer models? It would be interesting to hear some thoughts about it. I chose to assemble a pre-a kit anyway, it took quite a while but it is possible. The reproduction drivers will have to do for now and maybe for the next decade. 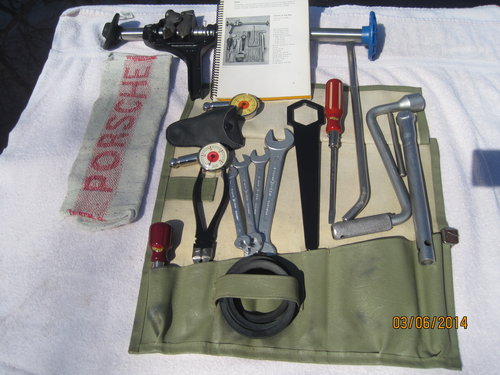 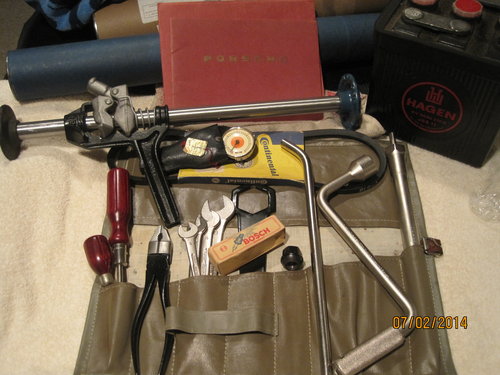 Victor,
I ordered a repro tool kit from one of the vendors. What a joke. Wish I could up load some pictures of what I got (don't know how to), but my advice is to be careful. Some of the tools were as different as adding a Cresent Wrench and calling it a "tribute"
Ben Sherman
'55 Speedster
Top

My 55 Speedster 80866 came with the Vigot Jack and the green vinyl bag. It looks like the one that Don showed a pic of.
Mine also had the DP angam (spelling?) lug wrench. Don do you know when the transition from "DP angam" to the just "DP" on the handle
of the lug wrench?
Top

Ben
in my opinion any original tool kit in a 356 correct year or not looks better than a repro kit.. stick with the early green 356A bag you have.keep an eye out for a early gray bag or buy a repro gray bag and beat it up a little so it matches your tools... you have a beautiful car with or with out the kit. Tool kits are the icing on the cake why use crisco frosting when you have butter cream in the fridge so what if its the regular butter cream and not the super rare coveted funfetti butter cream ( that stuff is good ) any butter cream is still better than the crisco frosting that sh t sucks. ... .. My 55 cab had a early 55 tool kit for many years until i acquired the correct pre a kit.. never lost a point with the early 356a kit .. and i am guessing any judge will give more points to a original 356A kit in a pre a than a repro kit. 80333 is early i would do the hammer bag if you are going to buy a bag then get a hammer . just be sure it has the correct handle.


Bob
as a rule of thumb the angam was a pre a thing there are two types the early brown ones and the later electroless nickle.. the angam was dropped with the 356a kits... but i have also seen them in early 356a kits..

Ned, I never knew you were such an icing afficinado, haha.
Your auction success with tools a few years ago is something I dream about,...literally.
But no such luck here. What I do have is (by the Cherneff site) a 54 bag with the three upper pockets. I have since filled it out with mostly original stuff. (just can't find that circle seven, or those two middle wrenches in L underline) I also am of the opinion of "use an original if you have it, even if it's slightly the wrong year". Maybe someday I'll find someone who want's to swap for the right bag, but I figure the 54 bag is even harder to find so I'm not sure how that would go.

And just to keep on track with the original poster, I was wondering, Ben, if the Vigot jack is original to your car? I always thought the 55's came with the Bilstein, (and thus had to have the jack handle in the kit) I don't know speedsters at all so maybe this is a speedster thing. I have both a vigot and a bilstien on hand and I tried to fit each into the jack clips and, while the Vigot could be forced in, it was obvious that the clips were sized for the bilstein. Early cars have all kinds of oddities so it wouldn't surprise me if your Vigot was original, but just curious what you think.
Top

Ok, I am resurrecting this quote as I am trying to put together a tool kit / kits for my cars.
One is a late 55 Pre A speedster, the other a 55 build A coupe.
After much research, I am now thinking that they may have both originally been supplied with the same style tool kit.
Earlier Pre A's would have had the 8 pocket tool bag, to accommodate the hammer. As Donald suggested above, and provided pictures, would the speedster have even been equipped with the hammer, in which case would they have been supplied with the 7 pocket bag the same as the 56 A.
Also I assume the speedster would have had the dip stick for the fuel tank, I have not seen this shown on any of the reference sites.
I would appreciate it if anyone could confirm the above, or correct me if I am wrong.
Thanks Rob.
Top 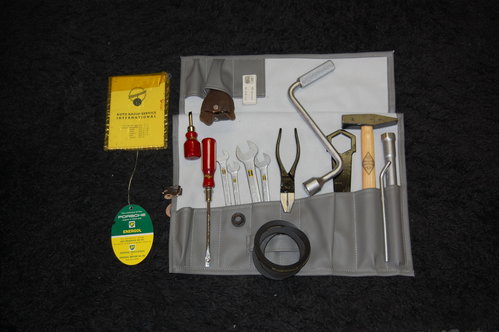