Share progress on your 356 related project or full restoration with others!
Forum rules
Post Reply
5 posts • Page 1 of 1
Message
Author

Dear Registry members, I’d like to share this experience that reflects the love we all have for our 356’s.

From records that came with my car, which was delivered in Germany, we discovered the surname of the original owner and, by Googling, we found only 7 people in Germany with that name. With a few calls, we found the original owner who was well known from his association with the steel industry and who was a formal supporter of a large sports club in Germany.
While I enjoyed having this knowledge, I was uncertain whether it would be appropriate to attempt a contact.

In the meanwhile, I was searching for an operable inside/outside thermometer, that was on the Kardex as an option. I found one on eBay.de offered by “Ludwig” who was located in Würzburg (Germany), which is near where I was spending a coming holiday.
When we spoke, Ludwig suggested that we meet so that I could examine the thermometer and avoid shipping the delicate item. We discussed my project and I forwarded photos that included the document revealing the name of the original owner. 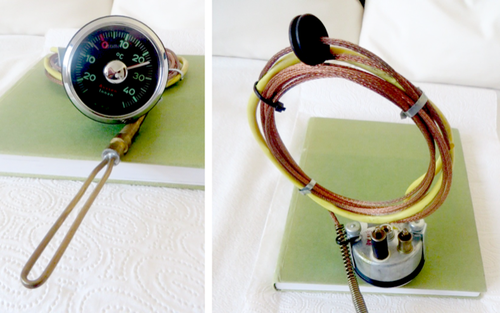 On our arrival at Ludwig’s, he kindly invited me, my wife and son into his house, where his wife and some others awaiting us. I had the impression that this was a “surprise” party and it turned out to be one.

A very distinctive gentleman introduced himself while pointing to photos on a table of a car, a lovely 356 SC, in amazing Baliblau, with himself standing next to it. 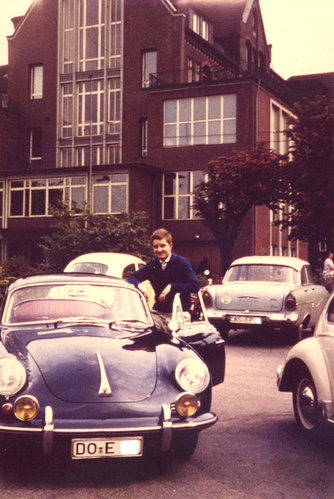 That was my car, or better the car his father had given him for traveling from Dortmund to Berlin, where he had started the study in Medicine
It turned out that Ludwig and the original owner’s son had known each other through the Porsche community in Germany and that he had set up the surprise meeting.

We had a long discussion about the car and my plans to complete a restoration to near original condition. Not only did I leave with the thermometer and some lovely memories of my car’s history but with a couple of bottles of wine one of which had been purchased at the 70th Anniversary Porsche celebration and that came from a vintner in Austria near Gmünd. 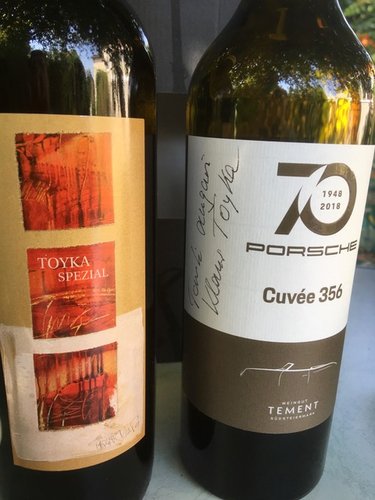 A special thanks to Bill Romano for helping me to prepare the story.
Last edited by Maurizio Santini on Sun Aug 12, 2018 10:14 am, edited 1 time in total.
Top

Thanks Doug, for me it's really a fairy event! Usually we look for the owner, but in this case, he found me first. If I were more photogenic and he had not asked me to respect his privacy, I would post even more pictures of us. Maybe in the future, at the meeting, when the restoration is over.
I should now update about the progress of the restoration...
Top

Great story, Maurizio!! Thank you for sharing it. Meeting the original owner of your car must have been very exciting. That's also a beautifully restored I/O thermometer. Were the fog lights directly bolted to the bumper or were they on a pedestal attached to the bumper brackets?

Thank you John, very kind by you.

I'm following almost daily your restoration in the other blog, you are doing a great job!

Incredibly, this thermometer was not restored, it is a true time-capsule, is still new. I should post some detailed photos for future references, before I will install it in the car.
Top
Post Reply
5 posts • Page 1 of 1