I am replacing an "A" fuel tank, that had been installed in my '53 as part of adding a fuel gage, with a pre-A tank with no fuel gage. I got an early pre-a tank to install and discovered it had a smaller fitting on the bottom for the fuel cock. I ordered the early pre-A fuel cock from Stoddard, which fits fine but has a 6mm outlet pipe as opposed to 8mm. Is this because the fuel cock Stoddard sells is for VW and the original Porsche cock had an 8mm outlet, or was there some adapter piece I am missing? All of the hard lines in my car are 8mm and per the Stoddard chassis numbers it should take the early pre-A fuel cock. Somehow it seems like Porsche used 8mm lines and/or fittings everywhere else in the fuel system and it seems unlikely they would have had a 6mm fuel cock. I had a friend machine up an adapter piece to transition between the 6mm fuel cock and the 8mm hard lines so I can proceed with the install, but I am wondering what was original in early '53?
Top

I don't have an answer but did it change when they changed fuel pumps? I know VW can either have a 6mm or 8mm fitting depending on year.
Top

Hi Tony, The 356 always had the 8mm fuel pump, which was the fuel pump used on the early 25hp VW engines. The 6mm pump was a VW change around 1953 or so. Perhaps there was an early 25hp VW fuel cock with 8mm outlet that the early pre-A used, but I am not that knowledgeable on the real early VW stuff.
Top

It is my thought that it should be a 25hp split window beetle or barndoor bus part I found this one on the Thesamba. It looks like a VW bus one as it has a small lever on the petcock.
http://www.thesamba.com/vw/classifieds/ ... id=1927927
Top

Thanks Tony, that sure looks like what the early pre-a must have had, or something similar without the short lever.
Top

Just replaced the fuel cock on my 53. The original fuel cock had about a 1 1/2 inch long copper pipe adapter fitting with corresponding small pieces of hose to go between the 6mm fuel cock outlet and the 8mm fuel line. The copper pipe was 6mm on one end and 8mm on the other.
Top

Hi Bill, That sounds almost exactly like the transition piece that my friend machined for me, except he did it in aluminum.
Top

I'm sorting out the fuel system in my 1953 356 mostly original car that came with what appears to be the original fuel cock and a much later, unused, replacement. All of the car's fuel system lines are 8mm as is the outlet pipe of the original fuel cock. The replacement has a 6mm outlet pipe.
The original's cast body is marked on one side "D.R.G.M" above a "VW" logo above "56.07" and what appears to be "KARCO" in a triangle on the opposite side.
The 6mm outlet replacement is marked "VW" on one side and "KARCOMA" (although hard to make out precisely) in a triangle on the opposite side.
Does anyone know if there are is a rebuild kit that will fit the original as I'd like to use it?
Thanks,
David 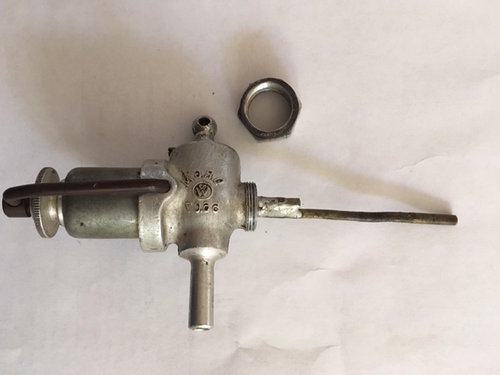 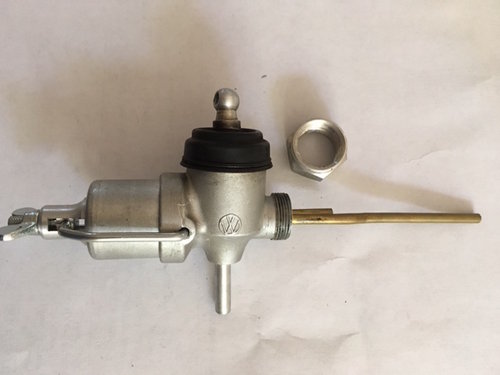 Hi David, that D.R.G.M. is identical to the original petcock from my '53 coupe. And the same as all the others I've seen on original '53 cars. Definitely rebuild it

These early fuel cocks are the same as those used on early VWs with the 8mm fuel lines, as mentioned above by others.

Perhaps you can use the replacement fuel cock to rebuild your original? All the internal parts should be the same except for the outlet tube size (6mm vs 8mm) and the stand tubes (4mm vs 5mm) which shouldn't need replacing.

In mid-1954, the petcock filter bowl got taller and had a wing nut holding it on. Different manufacturer too. And then the 356A (and possibly the last '55 pre-As) had an enlarged fuel cock with a larger nut were it attaches to the fuel tank. The old pre-A fuel tanks had 18mm threads, just like the VWs, as Alan mentions above.

Let us know how the rebuild goes! I need to rebuild mine too.
Top

Hello, attached are a few photos of the fuel cock from our late Sept '55 pre A, I believe it's original. I know it's not useful to the original question, but it might be of some use to someone.
You can also see the tank sender float which I initially thought was a DIY wine cork repair job until I found out that's how it left the factory, without the crazing on the covering that is. I picked this off and basically 'toffee apple' dipping in a pot of fuel tank sealant did the trick, well it worked in a bucket of water test anyway..........I hope it works as well in the petrol!!
V 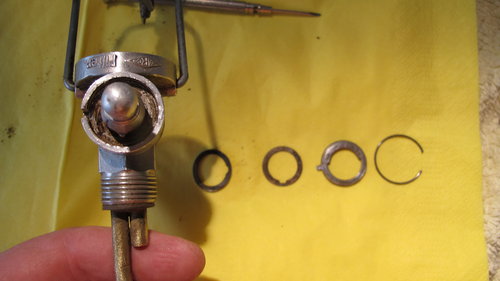 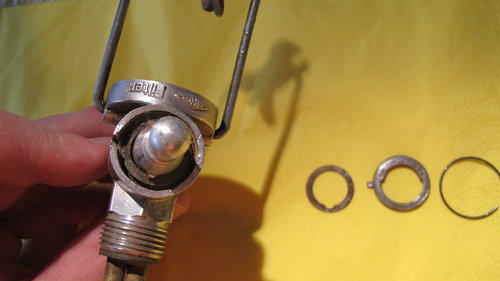 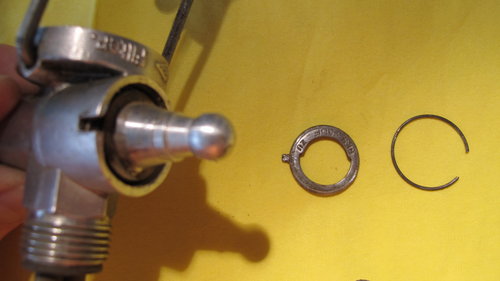 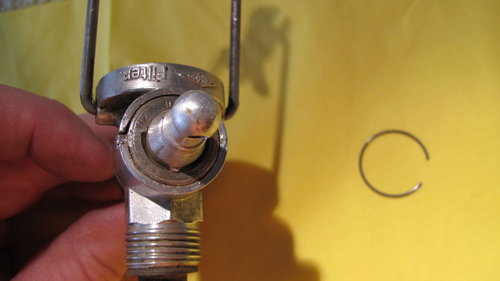 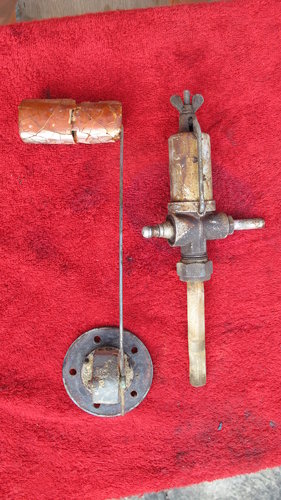 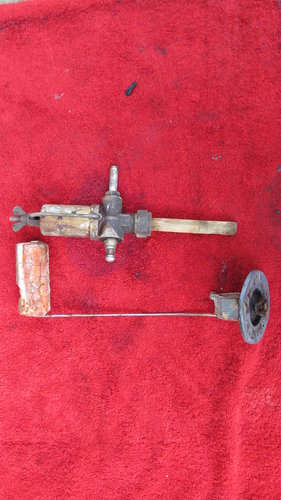 when rebuilding the pre A fuel cock it takes specific parts for rebuilding it, 2 different size gaskets and the screen which sticks up into the tank. Stoddard has these parts
Mike dejonge
Restoration Design Inc.
52 Pre A Body Bumper X2
53 Pre A coupe
54 Pre A speedster
56 Speedster
60 D'letern Roadster
67 911
05 997
Top

Been there, done that -- right near the Sindelfingen MB factory.
Top

Brad Ripley wrote:Interesting from the Karcoma website about their petcocks (VW guys call them fuel taps)

Been there, done that -- right near the Sindelfingen MB factory.

The original petcock was in a box of parts that came with my 1953 coupe and I just finished rebuilding it. It took much trial and error and, in the hopes that others can avoid both, below is a description of the project. It tests OK and will be in the car soon.

First, it appears only the fuel tank screen (356.56.203) and screen gasket (N.013.818.4) for early cars are available from our regular suppliers, and not one other critical part, the selector valve gasket. I searched the VW suppliers without luck. The hardest part of the rebuild is to modify an available, but incorrect, selector gasket to fit the early petcock body. The ID of the barrel is 19 mm but at the inside base the barrel opens outward into 4 semi-circular recesses to approximately 22 mm total ID. I’m guessing that the gasket “ears” in the recesses are to prevent the gasket from rotating when the selector valve is turned. Think of a circular 4-pointed star with the OD of the points 22 mm and the OD of the body 19 mm. 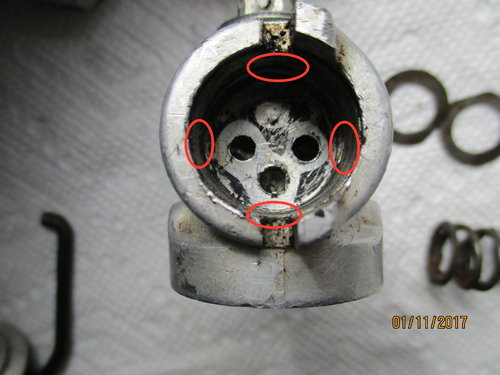 Disassembly was straight forward. Mine was frozen so a few nights of Kroll Oil on the selector body finally allowed me to use a 3/8” deep-well socket over the selector knob in a padded vise to carefully compress the valve inward against its spring enough to remove the circlip. Some more Kroll and carefully turning the valve back and forth and it finally twisted out. 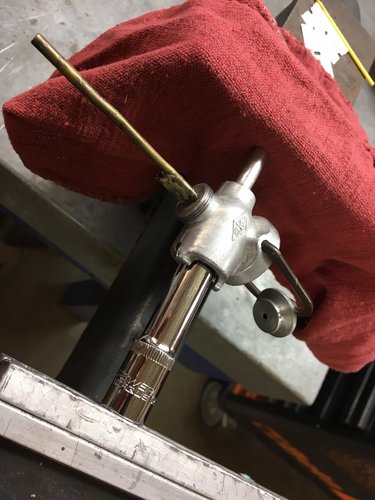 Inside was the expected coil spring, 3 unexpected thin metal shim washers (likely because the selector gasket used in the last rebuild was too thin for the spring to apply proper sealing pressure), and the rock hard remains of the old rubber sealing gasket I removed with dental tools and was able to get a thickness measurement from a fragment of about 1.5 mm (thin and thus the shims). I cleaned the inside with pipe cleaners, solvent and compressed air and Scotch-Brite on the outside. 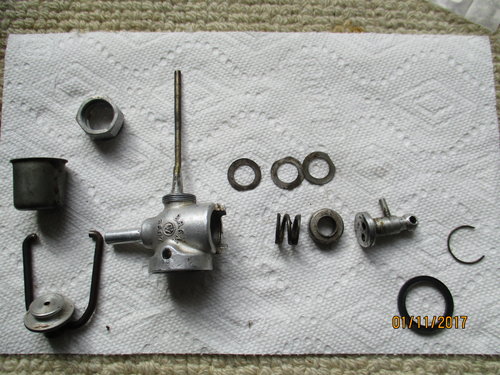 Selector gasket:
I bought a few different gaskets to modify and even tried making one out of cork sheeting but in the end the best (only) was Stoddard’s 22 mm cork gasket 356.56.207 (late fuel petcock cork gasket). Note that all the available gaskets have four holes but the early valve has three: main, reserve, outlet. The cork is solid but can be shaped with a Dremel and thinned to the proper thickness with a file. I thinned mine to about 3 mm which allows the rotating metal valve to compress enough for the circlip, turn with firm pressure and doesn’t leak. See the photos below for the OD 4-point shape. When properly shaped and thinned, the gasket will cup as it goes into the 19 mm barrel and then spring open into the four recesses. 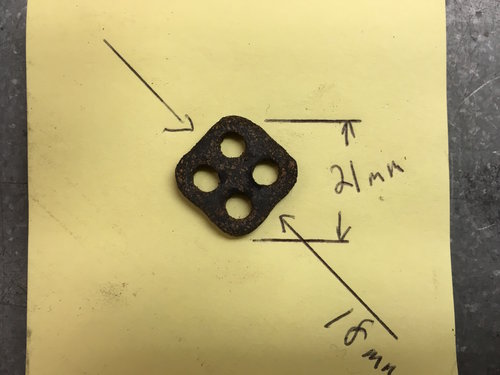 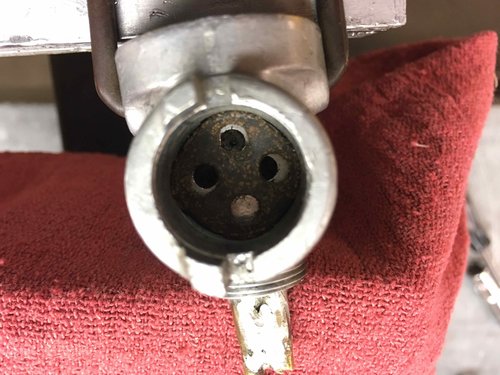 Petcock Filter Gasket (oblong hole):
This is a red fiber gasket 644.201.292.00 that goes between the top of the fuel cock and the bottom of the tank screen. It’s too wide to fit into the coupler so I used a grinding wheel to reduced its OD to just fit into the coupler.

Wire mesh cup filter:
The available cup filters are all 8 x 1.0 thread (fine) and the petcock body is 8 x 1.25 (coarse). It’s easy to rethread the filter stem from 1.0 to 1.25 but the threaded stem won’t get deep enough into the die to change the last few threads, thus the filter sits proud of the bowl top and the outlet opening, defeating some (all?) of the filtering. A solution may be to re-tap the body to 1.25 but I didn’t want to mess with it and am not sure a tap will go deep enough to avoid the same die problem. In the end, I screwed in the modified filter as far as it would go and installed a disposable in-line filter between the tunnel outlet and engine inlet lines. 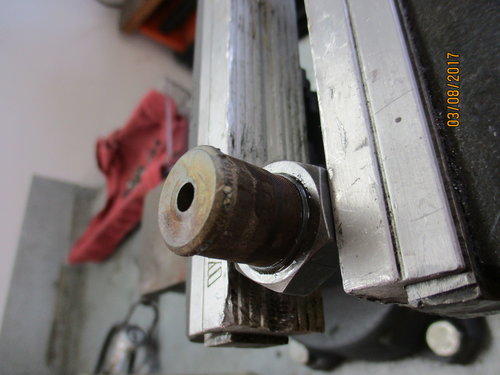 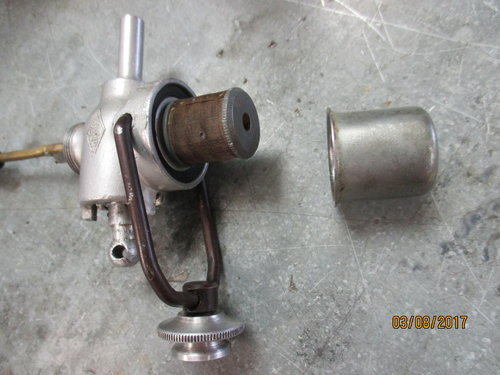 It definitely would have been easier to use a repro but the car is, with the big exception of a mid-1970s incorrect paint job, very original and keeping it that way is a fun part of my “Pre-A experience”. 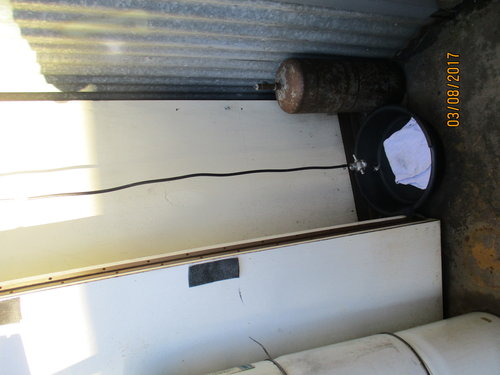 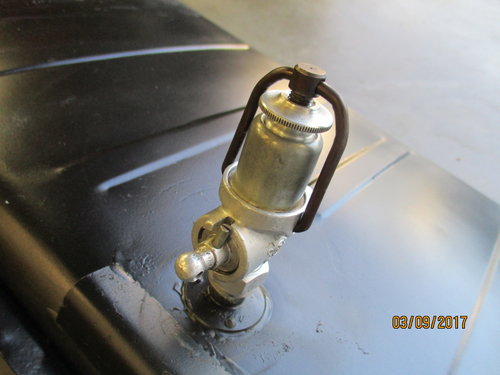