Ask questions about how to use the forum or any features on the website. Give us your feedback.
Post Reply
8 posts • Page 1 of 1
Message
Author

Suppose I want to search for "GT seats". How do I do that? When I just type that into the search box, it says "GT" ignored. I have tried adding "+" in front of one or both elements of the search. "GT" is always ignored.

This is quite the workaround but at least it gets the results you need: Search in Google "356 Registry GT Seats"
Sebastian Gaeta
www.arbormotion.com

on Google, use the following search phrase:

Thanks guys for valuable tips! But why is this site's searching so difficult?
#6386
Top

I certainly don't want to criticize volunteers but my experience on other sites using the exact same software is that virtually all of the features work better than here, not just the search feature.

That said, there is usually a workaround here and I am very happy the Registry site exists.
Sebastian Gaeta
www.arbormotion.com

how to find leaks
Top

Peter - Many of Bill's 4-cam articles appeared in the 356 Club of Southern California magazine. Bill may have been a contributor to the Registry magazine also in years past, but I'm not aware.
There is a reference to the 356 Club aricles in this forum from about 4-5 years ago.
http://www.abcgt.com/forum/5-4-Cam-Foru ... ranks.html
I did try a google search and found quite a few posts on Hirth cranks in the Registry Forums, but none by Bill
forum.porsche356registry.org "Hirth"
The 356 Registry magazine is not searchable by a word search, as such, since the old copies are saved as pictures of the pages and not as text. At least I'm not skilled enough to do it =8^) 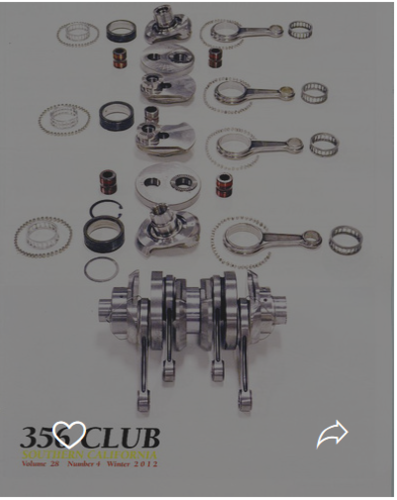 Added by edit
Here is the cover of a 356 Club mag from 2012 - not sure if that is a Hirth roller crank or not, but a good place to start.
You may be inquiring about the Hirth crank made in the 50's for the pushrod motors - that is a different animal.
Greg Bryan
Top
Post Reply
8 posts • Page 1 of 1

Return to “Forum and Site Q&A”