For those who obsess about exactly how their 356 left the factory!
Forum rules
Post Reply
11 posts • Page 1 of 1
Message
Author

Ok, had to share a fun little purchase I made recently- A genuine vintage Porsche umbrella.
Photos and story are on my website and thought some might find it interesting.
See: https://www.enginesinback.com/blog 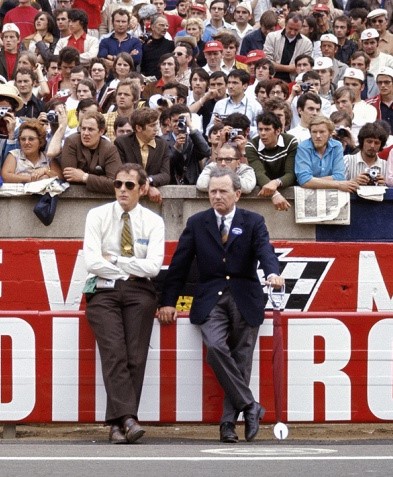 Nice find! It is very important to only use it right end up.
Top

How about a Porsche blanket, in trade dress maroon, with logo?
Top

It's in my car. It's a factory maroon "fleece-wool" lap blanket with nice porsche logo in the weave (not sewn on), that I had in my Speedster for 40 years. Photos to follow. Richard Roth, PCA Member 50 years.
Top

Paul
I enjoyed the story of the 356-era Porsche umbrella. I had a friend who had one 25 years ago, and remember him using it at Spring Carlislie.

There was also a later version Porsche umbrella, with the end of the handle being a 356 B/C gear shift knob. It was a quality item and well made. In about 1985 Brenda, I and four others were spending part of a Sunday with Helmut Bott. It included both a personalized tour of Weissach, and, later on, lunch at his country house (where he had a Porsche tractor). While touring through the main building at Weissach, Brenda had lagged behind a little as she looked at pictures on the walls. We walked out the front door of the building, Bott locked the door, and we started walking down to our cars. It was then that someone said "Where's Brenda?". We looked back up the steps towards the front door, and there she was ----- locked inside the building and looking out the front door! Bott ran back and unlocked the door for her. It was raining by this time, and he escorted Brenda down to the cars with his Porsche umbrella. He was very apologetic, and insisted Brenda take the umbrella as a gift. We have the umbrella to this day.
Jim Perrin
Top

Really great story Jim! Thanks for posting it. I do have another Porsche umbrella which I have always thought of as being early 911 era. It is also very well made, and perhaps the same as the one you refer to? I probably won't keep it now, but it has been a fun item to have. Maybe post a photo of yours if different than I am showing below.
Thanks again!
Paul 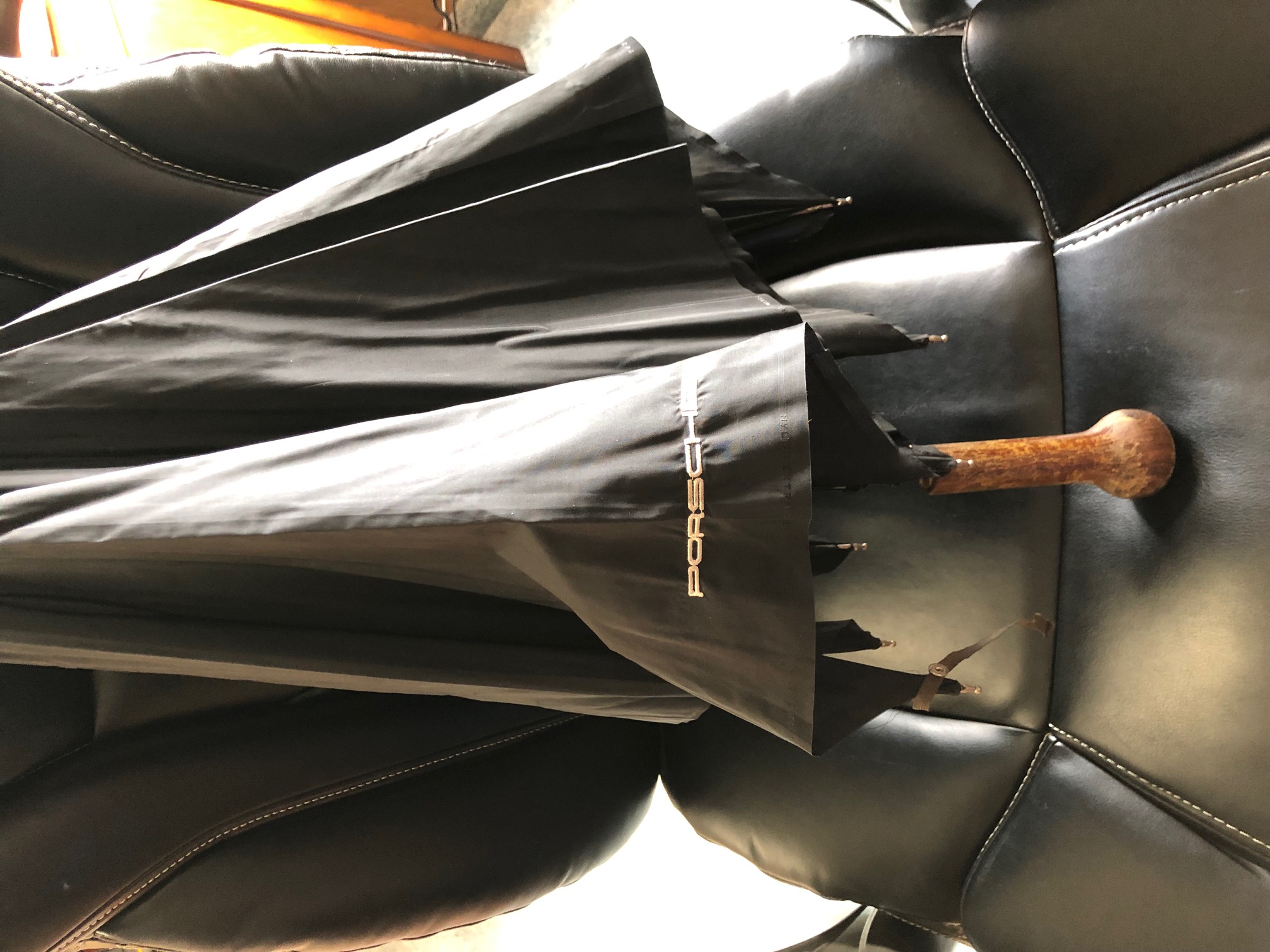 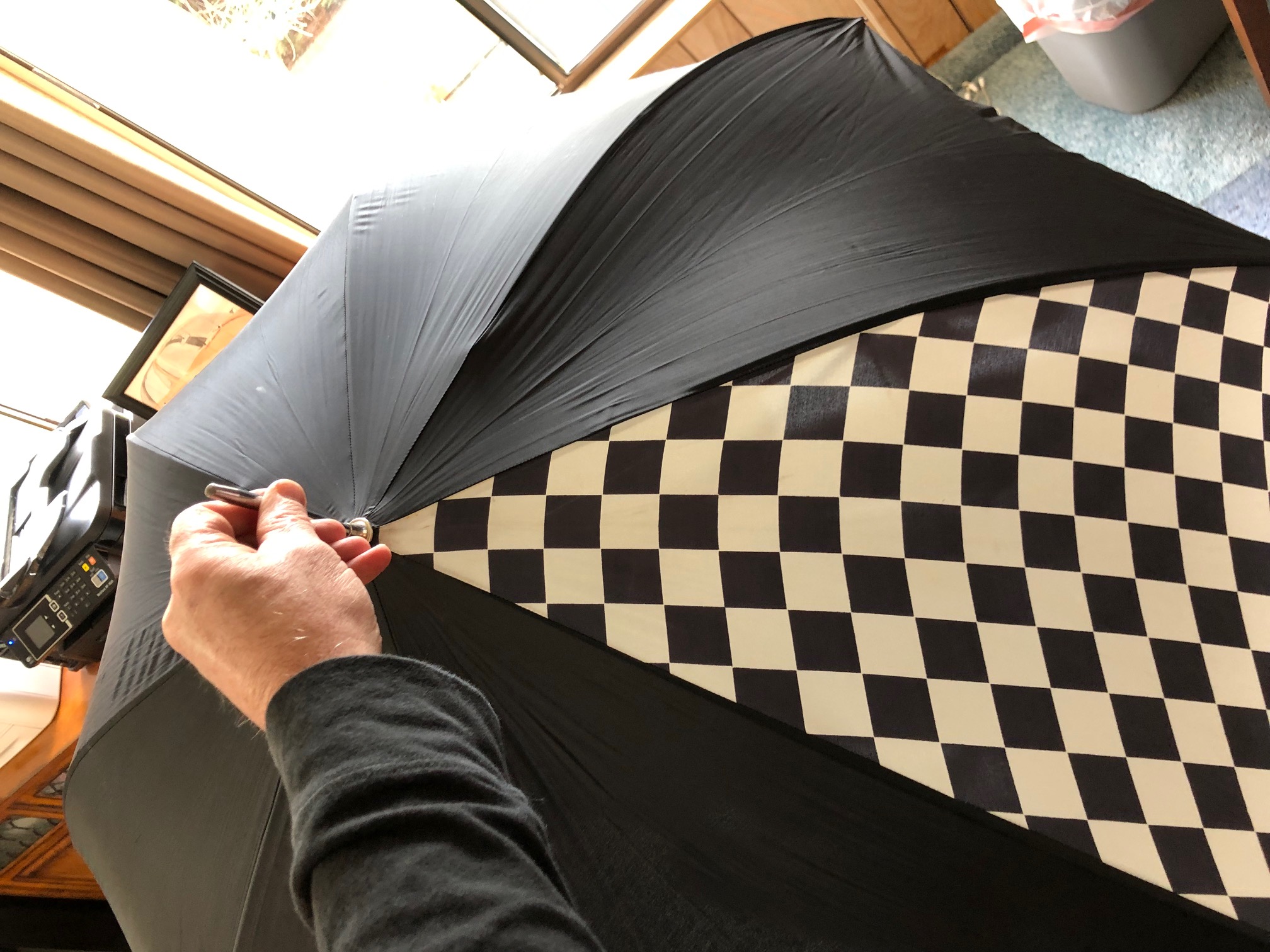 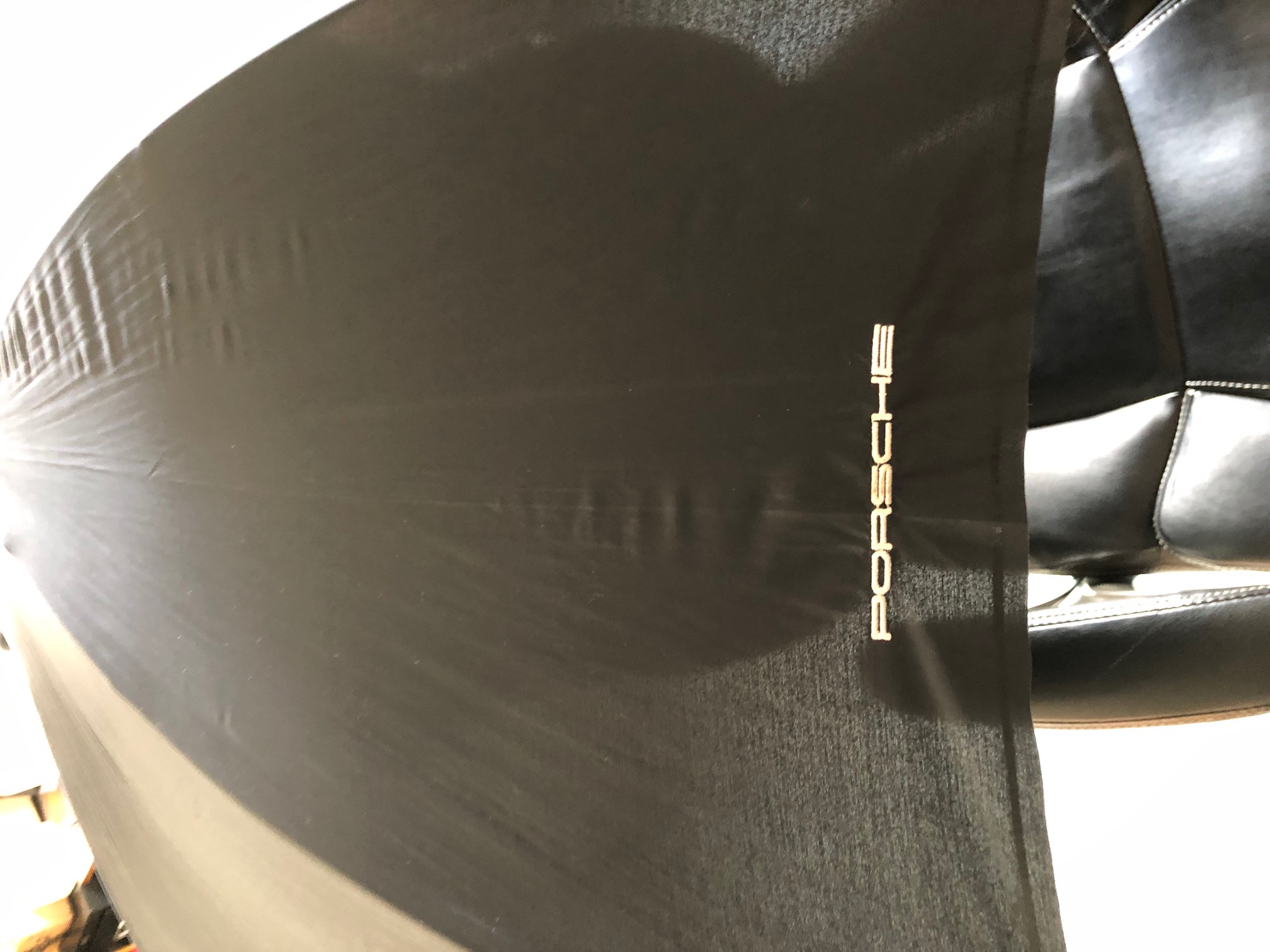 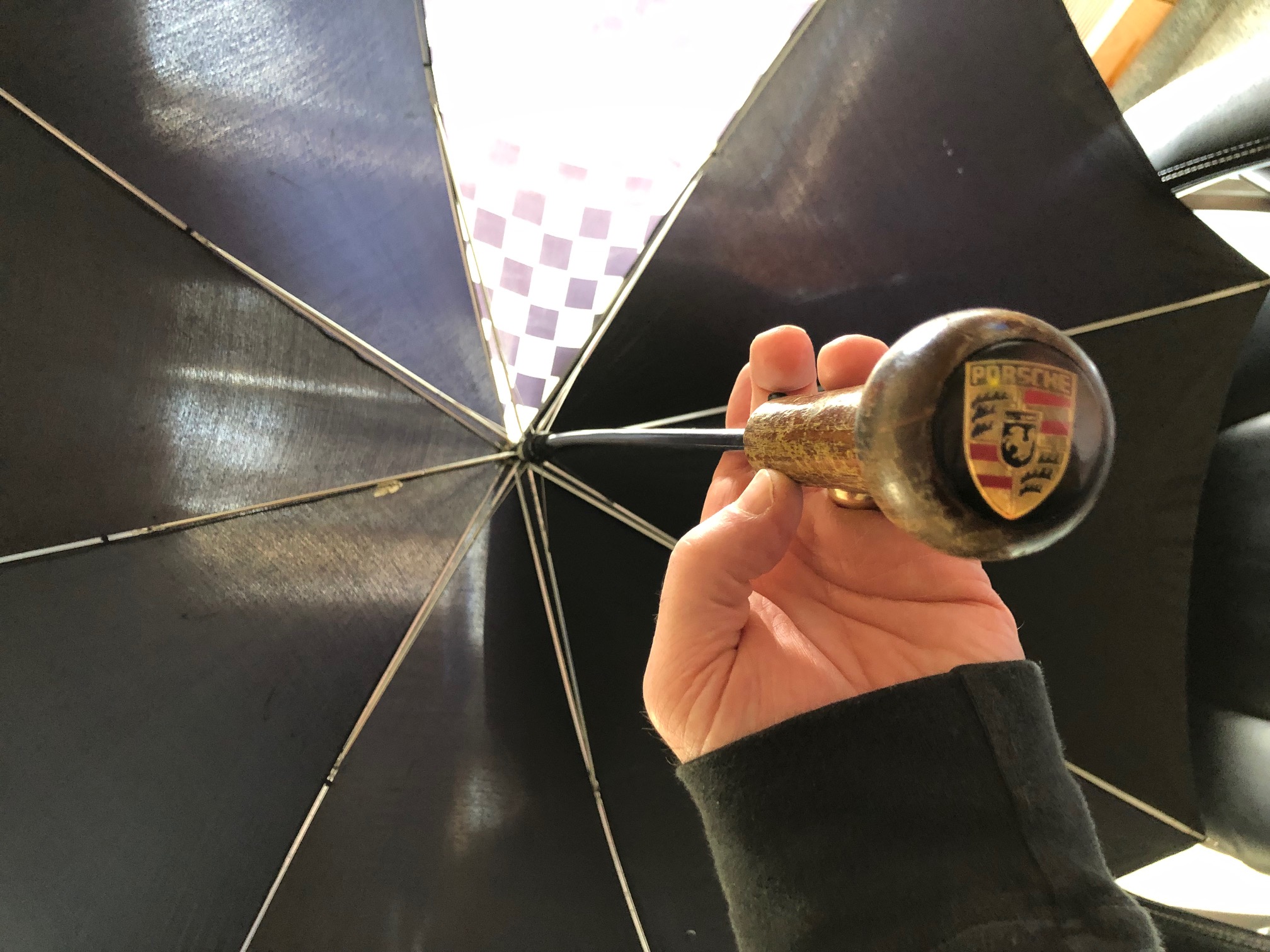 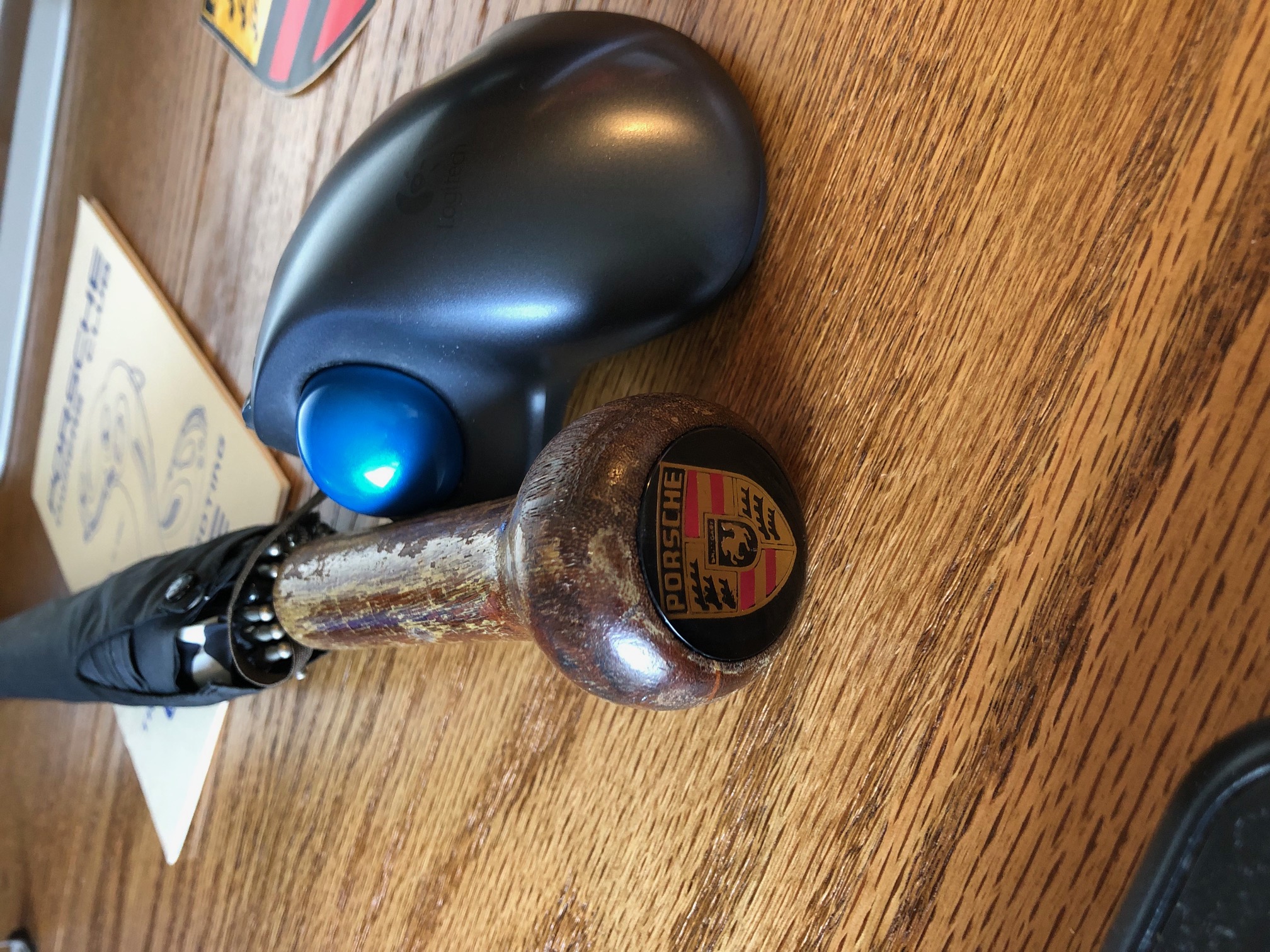 Jim Perrin wrote: ↑
Sat Oct 19, 2019 4:36 pm
...he escorted Brenda down to the cars with his Porsche umbrella. He was very apologetic, and insisted Brenda take the umbrella as a gift. We have the umbrella to this day.

What a great narrative and priceless keepsake, Jim! Bet you & Brenda never tire of telling that story.
There are a couple of the 70s-style umbrellas coming up at the next Automobilia Ladenburg Auction (item 1237). 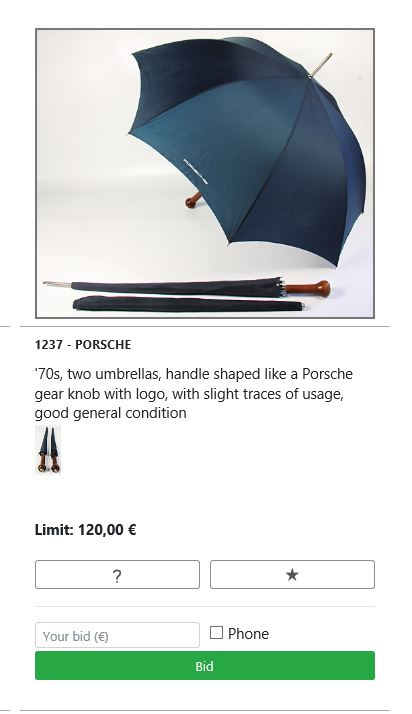