Can someone please educate me on the length of the case studs that connect the front 3rd piece to the halves? They're listed in the printed and electronic manual, but there is no indication of the length. Interwebs not helping on this one. Thanks. 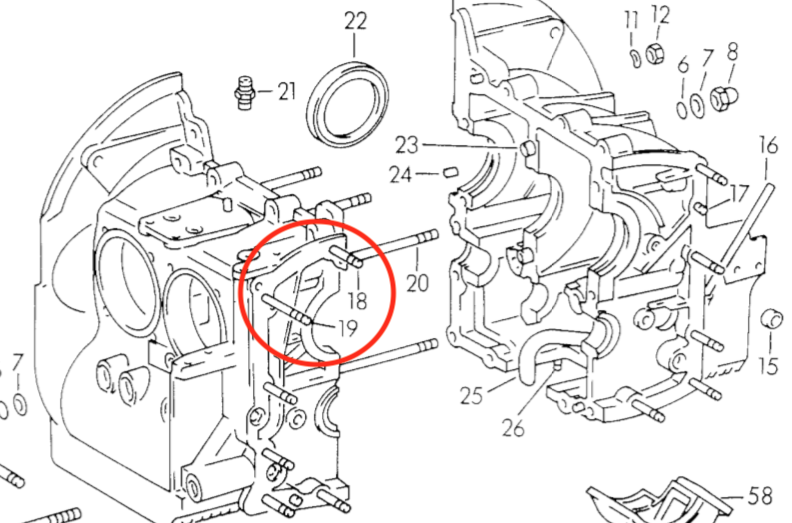 Just measure the 3rd piece and you'll have your answer.
Top

The 10-studs are 8 x 55mm long;
The 1-stud is 8 x 77 (or 80) mm long. Make sure the rounded tip/end is outward which makes it easier
to add the 3rd piece; The flat ends go into the case and usually "bottom out" for proper extension.
Top

I appreciate that it may seem obvious, but it wasn't that straight forward for me. I don't know how deep in the case the studs are meant to go, or protrude from the third piece. I have several studs that are close but not identical in length. A lot that I took off the engine wasn't correct, much less original, for the car.

Thanks for this info Dick. None of the studs I had on hand had rounded tips. So I think you're confirming what I suspected. The studs were not original Porsche.

I did have on hand a 10-plus count of studs of same length. They were just shy of 60mm. The run of threads were shorter on one end, so that's the end I put into the case. They bottomed out right about where the threads ended. I think it was about 15mm into the case. Roughly 2mm of the stud protrudes past the torqued nut. Fortunately I also had a single long stud matching your 77mm.

P.S. Just out of curiosity, is a flat versus round stud end being visible the kind of thing that would get you dinged in a concours? I assume so.
1960 356 S90 Sunroof Coupe
2014 Carrera S
Top

It's just better to have the ends rounded to prevent any burrs on the edges of the holes
when installing the 3rd piece, and you'll notice the cylinder head stud ends are also rounded.
Ditto on the 2-lower studs on the bell-housing face. (to the transmission's holes)

The same thing on the cylinder head exhaust port studs, but the new ones may not have rounded ends
like the originals--and another Ditto--the 10-sumplate studs for easy adding the nuts.
Top
Post Reply
6 posts • Page 1 of 1