It would be better if I could hold the parts in my hand and take a few measurements but I have doubts about the machining of the heads and it looks like there was more CR than 8.5 and a B Normal cam would develop more pumping pressure than a B Super/Super 90 cam.

Are your spark plugs hanging into the chamber enough to get hot and glow?

Measure from the original surface with the factory cc number to the machined surface where the top of the cylinder seals. How much?

What was the total thickness of all the copper base gaskets placed under each cylinder?

How about the exhaust valve dent in the valve clearance pocket?
Top

Doesn’t the exhaust valve pocket that is under the intake valve look more dented/ polished than the other one? Seems strange since the intake could never reach that spot.
Top

Martin Benade wrote: ↑
Sat Nov 09, 2019 11:23 pm
The 36 Hp VW engine in my first B got one piston looking that way from 20 minutes on the freeway with no belt. I was young and dumb enough not to have a working generator light!

My theory is that the heat, partially clogged oil cooler and number two cylinder losing its seal all led to the melt down on three.
The whole chain of events began with driving for several hours in 95 plus temps, then climbing a 5k foot grade with triple digit temps at freeway speeds.
Since it looks likely number two cylinder was slightly shorter than one the heat must have led it to finally lose its seal, which meant we were now climbing the final bit of the grade with three cylinders which led engine temps to sore, which I saw happen right after we felt a slight loss of power, at that point number three which was running hotter than the other cylinders thanks to the partially clogged cooler, likely melted down causing the engine to stall.
Had the cylinders not been defective I don't think I would have had any issues although with the partially clogged cooler perhaps eventually?
My take away from this is never assume what you are getting from any manufacturer is within specs and have everything measured before you install it. Not just with AA but with Mahle or Scat or anyone, quality is just not there anymore.
Top

Dan; I'm going to assume the cylinders were OK; the heads were not cut properly.
Martin; I really don't follow your comment???
Top

And your actual measured CR was what?

… Add what carbs, and what jets, venturis?
Mike
Top

Martin Benade wrote: ↑
Sat Nov 09, 2019 11:23 pm
The 36 Hp VW engine in my first B got one piston looking that way from 20 minutes on the freeway with no belt. I was young and dumb enough not to have a working generator light!

Reminds me of a roadtrip I took in the 356A years ago from Walnut Creek to Denver. My motor was in the middle of a rebuild and still in pieces waiting for parts from the machine shops. Determined to take the coupe on the trip, I slapped a 40 hp VW motor in it. Driving a lonely stretch between Tonapah and Caliente NV, I heard a loud THWACK and the generator light came on. Instantly knew it was the belt. No worries, the last thing I did when packing my tools was grab a handful of spare belts. Well, 356 belts are too short for VW's. SOL, weaving a splice with coat hanger only lasted a few hundred yards. Sacrificed a leather belt, same fate. Wrapped my girlfriend's panty hose around the pulleys, made it another 1/4 mile. Now we were at the mercy of a good samaritan for a ride to the nearest gas station to get a new belt. 6 hours later, running again with a new belt. High altitude passes in the Rockies are a treat with a stock VW motor.
1958 356A 1600 Super Sunroof Coupe
former 1966 Euro 912 Sunroof
former 1978 Intermeccanica Speedster w/'68 912
Top

You can match cylinder lengths to within .0001" or so without much difficulty; a decent dial indicator, stand, and a piece of glass or granite will do just fine for less than $100.
But that won't tell you if the cylinder tops are both at equal 'heights' from the case surfaces or the crank centerline, which are two pretty important values. Yes, Pre Mat sells tools to find those, but fiddling with straight-edges and depth mics can get you pretty close. And you *really* need a burrette to check the head-chamber volume.
Here's a link to finding CRs; if it needs updating, I'm sure we'll hear about it.
https://precisionmatters.biz/pdf/compression-ratio.pdf
Ron LaDow
www.precisionmatters.biz
Top

Weird I didn't hear any odd sounds with the valves hitting the Pistons. I also don't see any evidence of detonation damage on the other three Pistons but maybe I'm missing something?
I took the short block apart, and the crank and cam and lifters as well as rods look good. Bearings aren't too bad considering, but bad enough of course to be replaced.
Assuming no damage to the exhaist valves from playing footsies with the Pistons it looks like I might get off with a new set of Pistons and cylinders and bearings as well as seal kits.
I will ask the machinist about the heads...
I'll also replace the oil cooler cause I'm sure it's full of shrapnel.
Could have been much worse...it's a numbers matching engine. 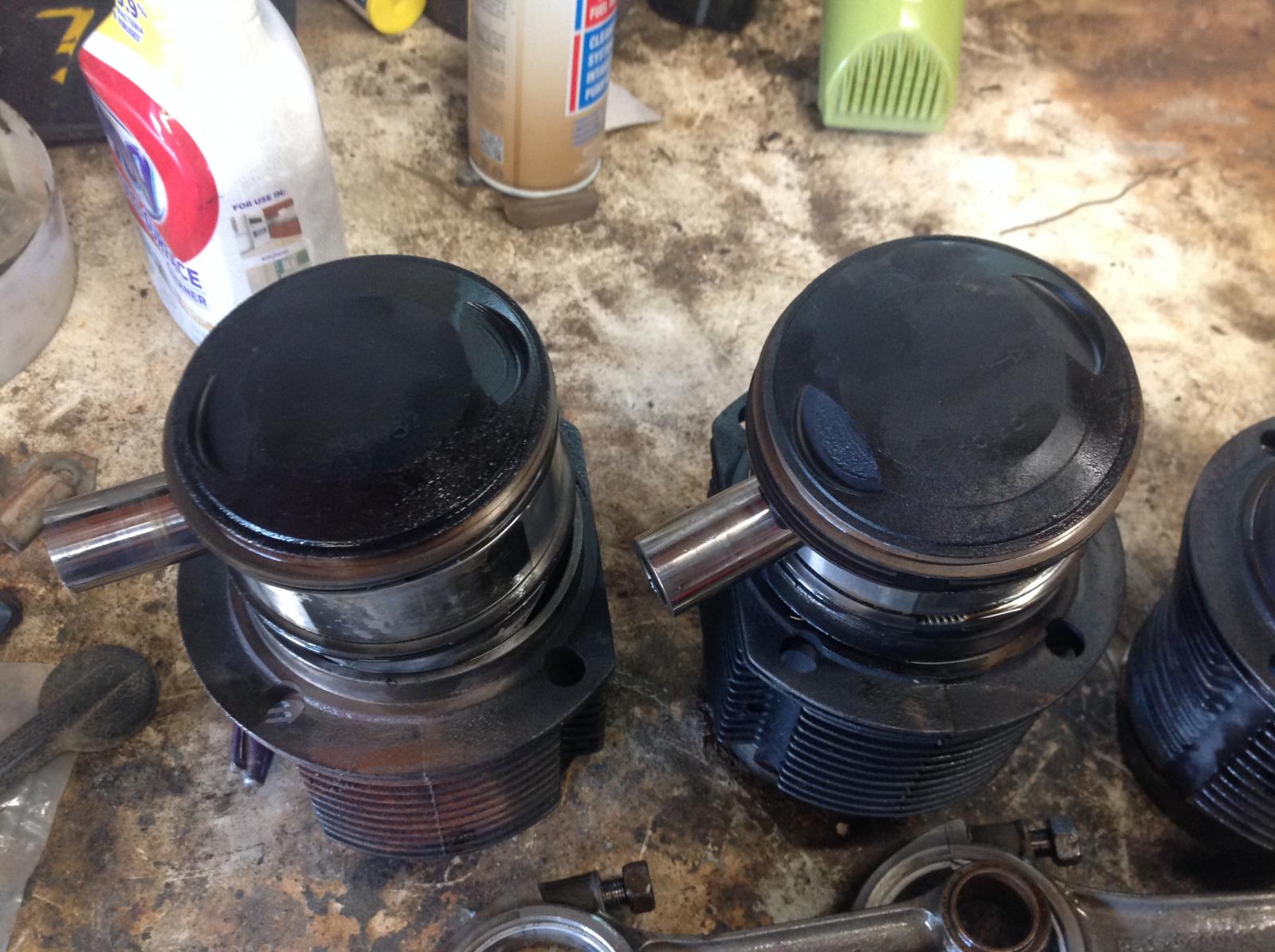 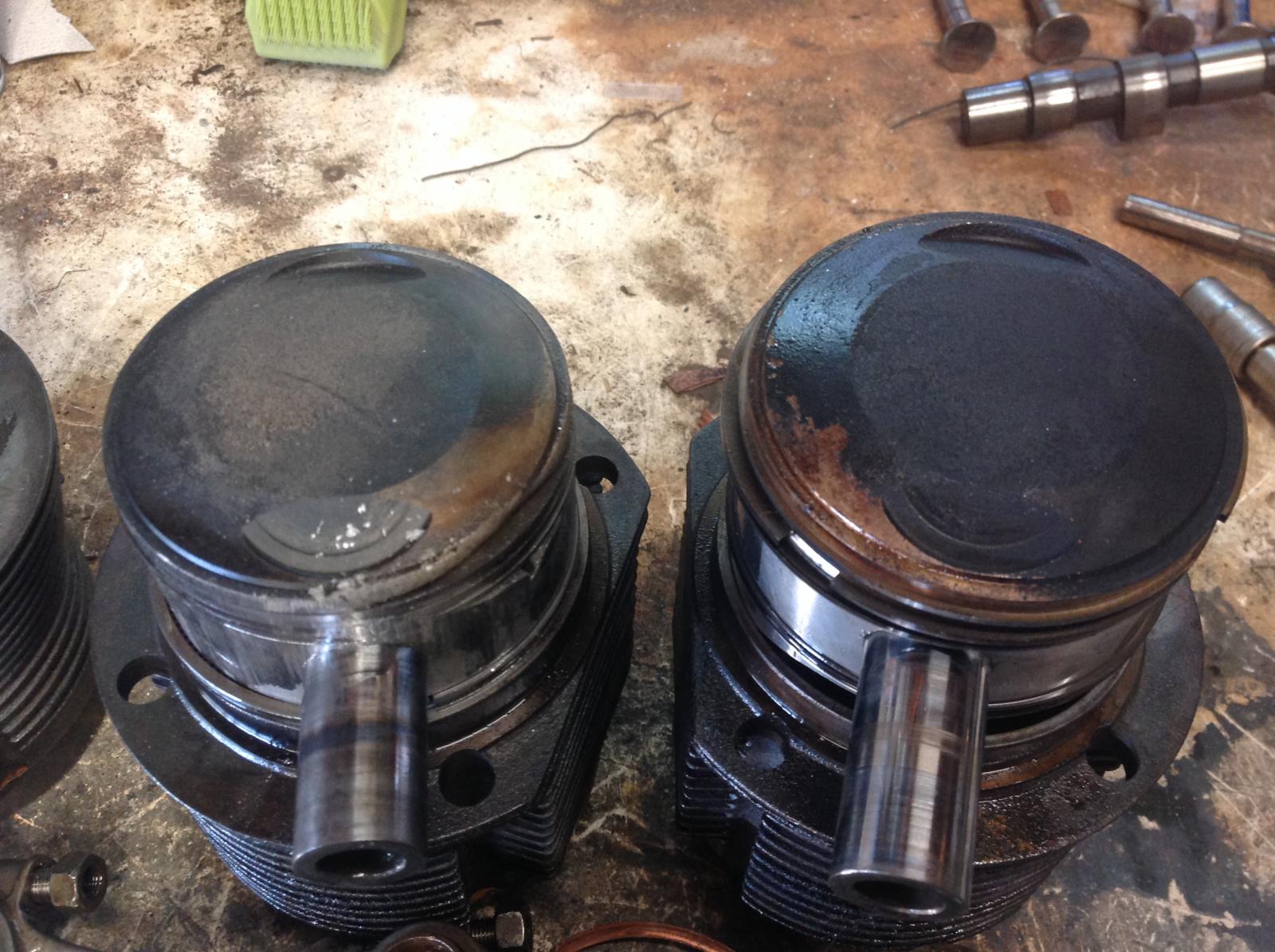 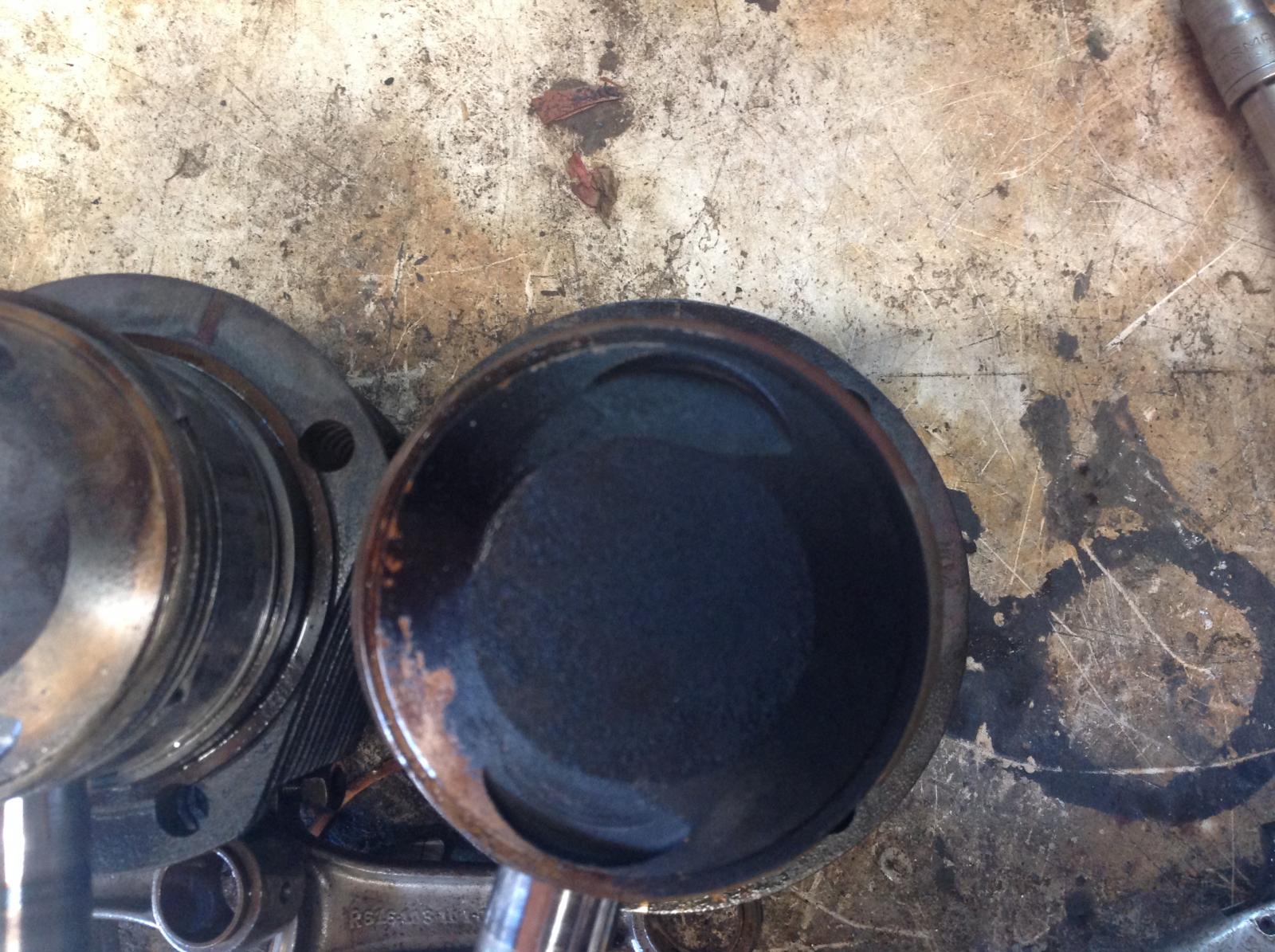 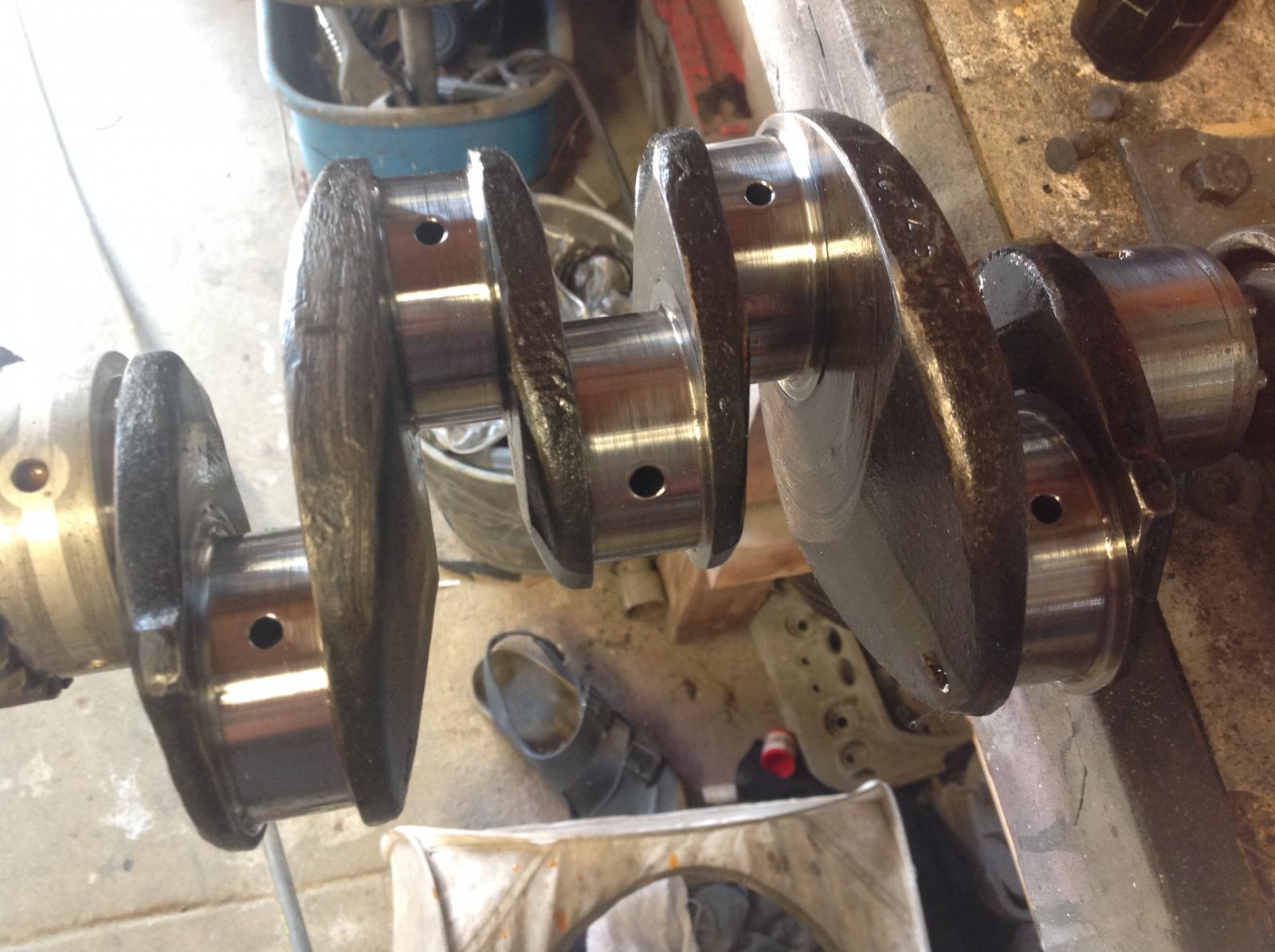 I removed these from an engine built by a shop in Philadelphia many years before. Take note of the seemingly high domes on your pistons.

Your domes were hitting the heads. Your valves were hitting your pistons. Your heads are cut too deep. Your domes appear to be tall like maybe 10.5 CR pistons. You may have been up over 12 CR. There are ways to measure CR without the bottom end but it should be done by a person that has done so before.

I also don't think the machine work is very good but being 3000 miles away I could be wrong. 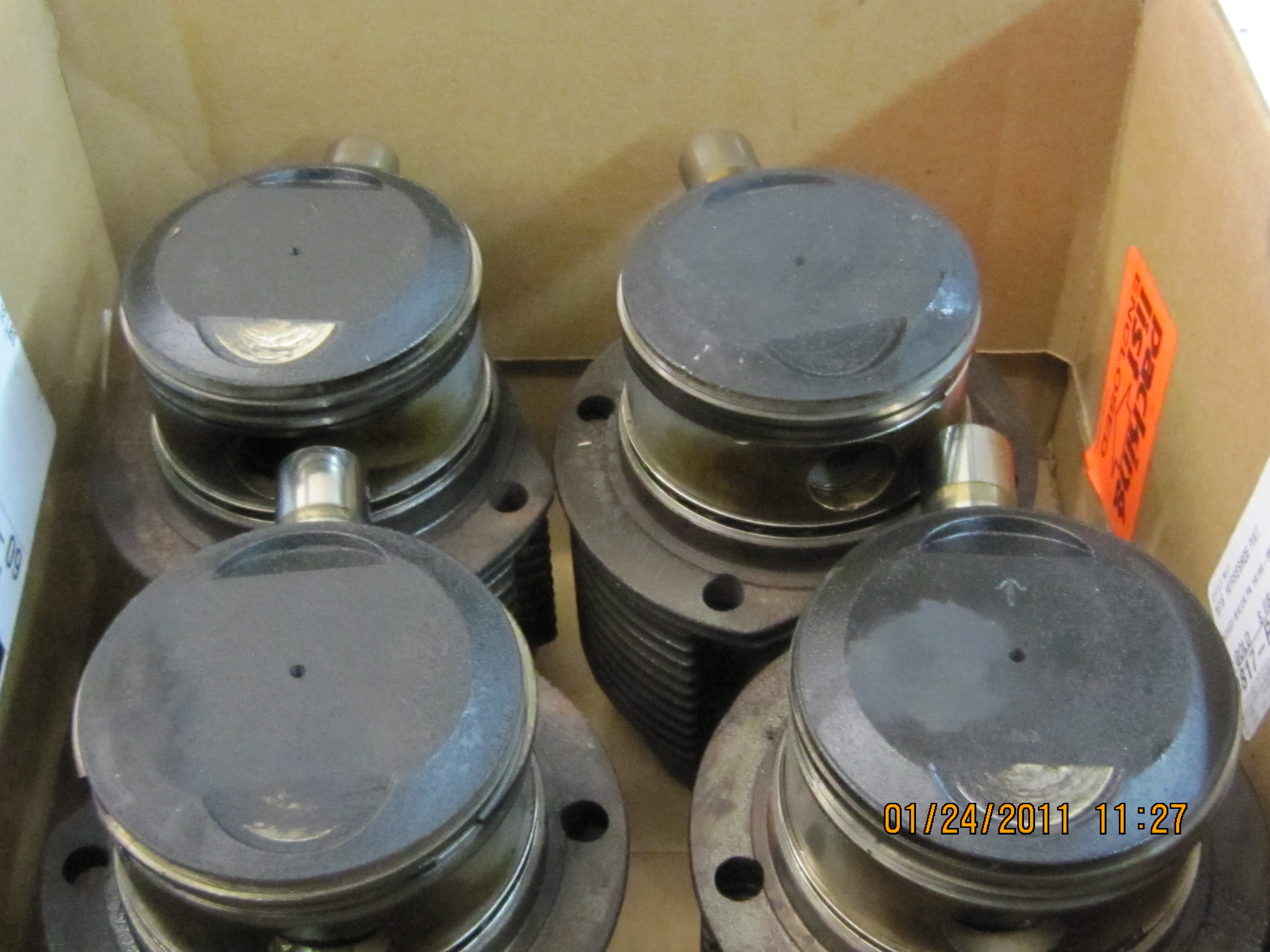 Yeah I see the difference, weird.
Mine are AA Pistons for B heads, I don't think they sell higher compression ones, but that bears checking into.
The car came with the machine work already done on the engine and some new parts, like back in 1974. The heads were rebuilt but I think I had the guides done as the ones in it where iffy old copper ones.
It came with a NOS set of 85mm Mahle Pistons and cylinders, I believe they were for an industrial engine as they looked to have been flat topped but someone machined a bevel in them as well as depressions for the valves. I was told not to use them as the machining likely weakened the material, so I bought the AAs instead.
I'll post pictures later.
Thanks again everyone for your input.
Top

Perhaps the previous owner had a plan to use low compression pistons to compensate for heads that were cut too deep thus getting to a manageable CR.