Well, my wife and I had a very nice time at the event in Flagstaff last weekend. The drive out from San Diego with good friends was enjoyable and pretty much drama free. The ride back, well, not so much.
As we were approaching El Centro on the way back I joked with my wife that we were almost within AAA tow range so I could relax. She was driving, the car was running great, nice and cool even with the 98 degree heat, 3100 RPM so barely straining. Then we hit the grade gomg up the east side of the Lagunas.
Near the top of the 4K foot climb she said the car felt like it was loosing power in fourth, I looked over at the temp gauge which read somewhere between half and 3/4 across, no worries, probably just the grade. Told her to downshift to 3rd, car felt like it was pulling as we approached the crest she shifted to fourth, all of a sudden the engine felt like it lost power and in a matter of seconds it seemed the temp gauge shot up and the car died, smoke started coming out of the back.
We pull over, let it cool, eventually fired it up and smoke was shooting out from underneath the one/two cylinder head.
We were near Jacumba, 72 miles away,within the 100 mile free tow. That was the good news.
I noticed a few drops of oil coming form that side but that was about it.
AAA driver was a nice guy and my wife took it all in stride.
Next day my son and I fired it up. I drove it up and down the block, no funny noises but for sure running on three cylinders.
Using a flashlight I ran the engine and looked through the right heater box and could see smoke and a bit of oil coming from number two cylinder where it enters the head. Explains the oil source and lack of power. I pulled the valve cover and checked the lash which was all good but noticed a good amount of brass flakes in the oil. I. Did the valves before we left and the valve covers Were clean, so something got eaten up since.
I'll be pulling it apart in a couple weeks but any theories? I rebuilt the engine about 9k miles ago and it used no oil, ran cool as a cucumber, etc etc. Its got AA big bore Pistons and cylinders rebuilt B heads. Stock crank. Did the proper torque sequence on the heads... Should have been bulletproof... 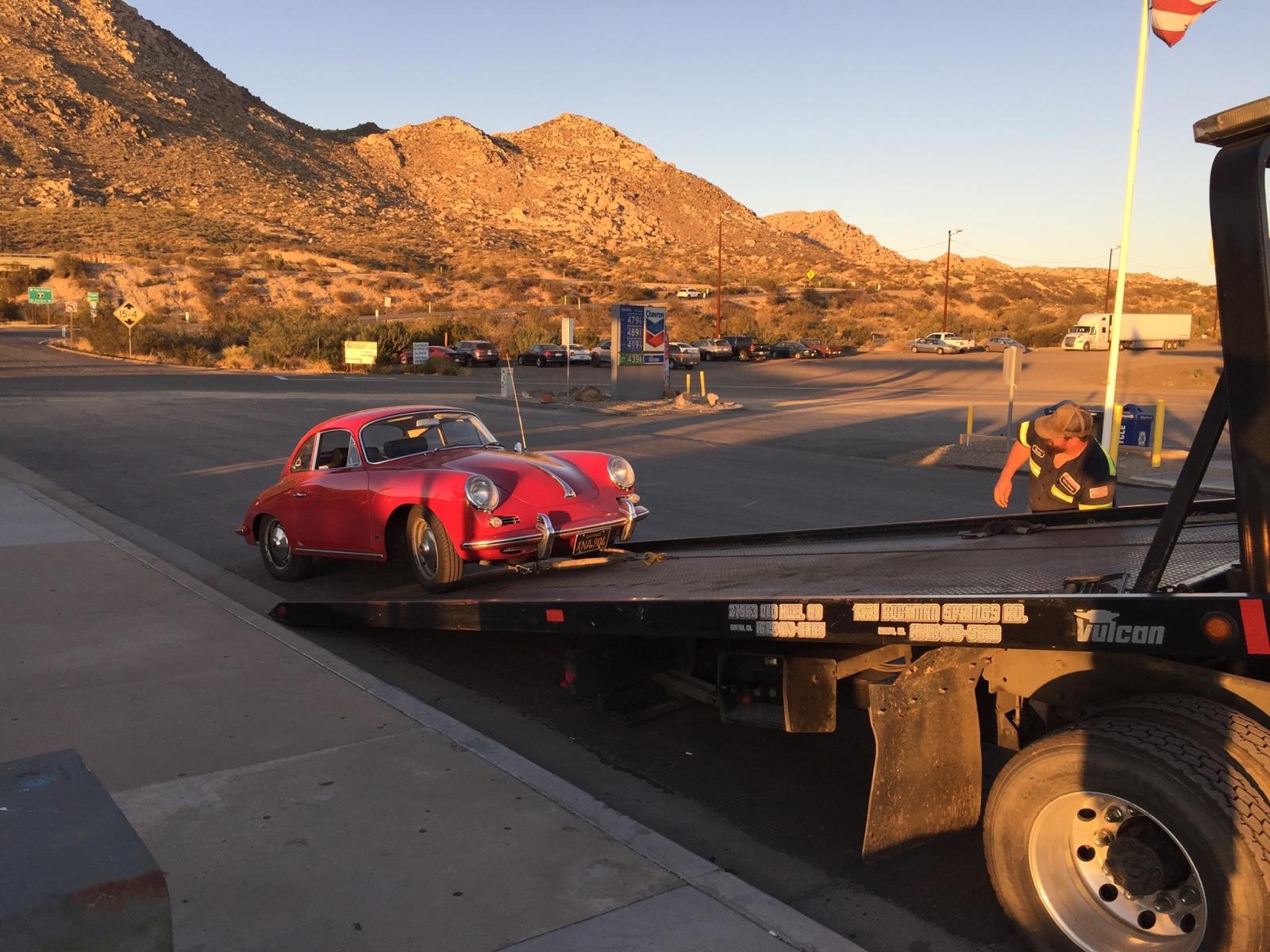 Odd that it would fail at 9000 miles. There isn't much brass colored metal in a 356 engine, wrist pin bushings, valve guides and distributor drive gear. It could be a failure of the AA wrist pins but I would expect noise from that. A valve guide problem could react to the heat of the climb causing loss of compression but I wouldn't think the valve lash would be correct. The climb might have caused detonation and the rings may be stuck in the piston grooves.

May the great memories of the Holiday diminish the angst of the engine failure.

Try re-torquing the right cylinder head, You might get lucky.
Top

But better check out the brass flakes.
Top

I gave up on the AA Big Bore Kits. 15K-20K miles before I found myself back to square one with the AA P/C kit. After several tear downs starting under 10K miles (and even a couple of replacement jugs and rings replaced by AA under warranty), I finally bit the bullet and put a Shasta kit in. That doesn't mean they have anything to do with your problem. Just saying

Glen Getchell wrote: ↑
Wed Oct 09, 2019 9:40 pm
I gave up on the AA Big Bore Kits. 15K-20K miles before I found myself back to square one with the AA P/C kit. After several tear downs starting under 10K miles (and even a couple of replacement jugs and rings replaced by AA under warranty), I finally bit the bullet and put a Shasta kit in. That doesn't mean they have anything to do with your problem. Just saying

It might.
What issues did you have? Did the seal fail between the cylinder and the head?
Top

So same problem as the 356 that you have for sale where you also rebuilt the engine? 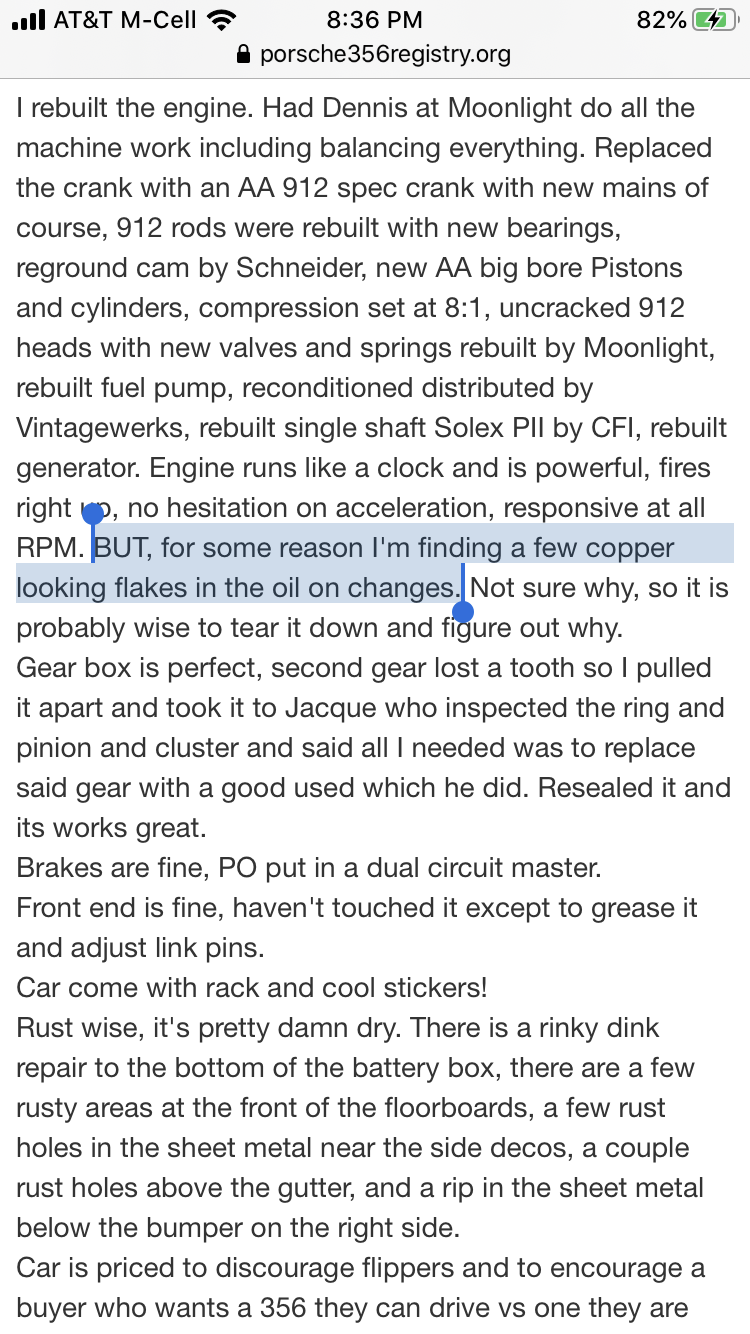 Well my memory which used to be like a vault is failing as I get older. It seems like I can only remember things like the entire script to "Blues Brothers" or "Caddyshack". Real life seems to be hidden behind a translucent sheet. However, I do sometimes remember to log my repairs. And the Log Book states that I installed the new AA (cast) Big Bore kit. with a 9 to 1 ratio in 12-09 and that the car ran strong. The book states that in 1-10 I had to pull the engine and R&R #2 Jug, but it doesn't say why. In 2011 or 2012 (I'm confused by what I wrote) with just under 10K miles on the kit I logged that the car had started to ping very badly. It goes through all the things I did to try to fix the pinging. It also states that the car had a increase in oil usage. I pulled the engine and found broken rings and 2 scored jugs. It notes that I contacted AA and that they warranted out two new jugs and a full set of rings. I note that the oil usage is back to normal but mild pinging remains. I moved to premium gas. After approx. 15K miles for reasons not logged, I did a compression test and found #1 had 30lbs. Pulled engine discovered top two rings broken on #1 and the top ring broke on #2. I note that the the kit had 18-20K miles on it by 2016. I then decided that they were junk and swapped them out with a new Shasta set. I now have almost 15K miles on the Shasta kit with no memory or notes of issues. Now you know as much as I do, and more than I remember. Though reading it does bring it back some.

Some one should have told me that this getting older shit sucks! Who knows, maybe somebody did and I just don't remember.

Glen; were these AA P&Cs used in your race engine? What rpm ?
Top

Are broken rings typically due to detonation?
Top

Dan, recheck the distributor timing before disassembly, when you have it apart, re confirm the compression ratio, and have the distributor total timing confirmed in a distributor machine. Also, remove the fuel pump, and slowly turning the engine, view, and inspect the brass distributor drive gear, for damage. Was this gear an original Porsche part, or aftermarket?

" The climb might have caused detonation and the rings may be stuck in the piston grooves. "
Note C.J.'s comment, and other council. Check ring side clearances, and end gap, and let us know.

These failures sound like the detonation damage to which C.J. refers. Some of the causes, historically, have been;
a) too much timing, especially for the octane of the fuel, to adequately support
b) too much compression ratio, for the fuel octane used, and ignition timing, as well
c) a "too lean" fuel to air mixture. Per David Jones, if you run the 10% ethanol, you MUST install richer jets, for your conditions
d) too high engine loading, in too high a gear, "The climb might have caused detonation"

The heat observed, is a hint... same with increasing oil consumption, these engines will let you know,
Mike
Top

It's been running o.k. for 9K miles and then something went wrong. Has it been run under similar circumstances: heat, altitude and uphill climbs without incidents? Keep us posted.

The loss of power is not due to an internal failure, but external. There is literally compression blowing out of the no. 2 cylinder along with a small bit of oil, meaning the seal between the head and cylinder failed on number 2.
Like Vic suggested it could be the head came loose. I will check torque on the lower four, first, and go from there.
Trevor, the brass flakes are different from the copper flakes in the other engine and all of a sudden appeared with the engine failure. Maybe the engine got so hot in those few minutes that I had thermal breakdown?
Mike, I checked the timing before the trip and it was set to specs with a timing light. I also run premium. Ive put 9k miles on it driving it hard ane never had any issues. The engine was running cool until the cylinder failed. I heard no pinging but that doesn't mean it wasn't happening.
I will for sure update with pics when I tear the engine apart.
Top
Post Reply
138 posts