yes. When you turn the key the peg or pegs that come out of the lock cylinder are below that locking plate (which in the picture has no bolts holding it down). That is exactly what it locks against. If you played with a shifter off the car and tried locking it, it doesn't really work. I assembled mine about a month ago, so this is all fresh in my mind.
Top

Martin,
In owning (how many of the things?), I have never tested the locking mechanism out of the car. And to be honest, rarely in the car...
I stand corrected.
Ron LaDow
www.precisionmatters.biz
Top

I recall that when the lock is pushed down into the lock position a small pin or lever extends from the bottom of the lock body which does the locking when the key is turned. I don't think you can pull the lock and shifter base up and out because of the locking pin below the silver plate.

The picture of the shifter removed shows the lock in the unlocked position.
Ron Domkowski
62 356B Super T-6
Top

Seems to me, you were. At least enough to answer this question.
Ron LaDow
www.precisionmatters.biz
Top

Thanks for all of the valuable input. We have a locksmith coming tomorrow. I will let you know how we make out. Again, thanks for all the great information.
Joe
Top

Jim Breazeale wrote:Just unbolt the shifter from the floor. You can then remove the shift lock from the shift base by removing the small set screw. I have never had to use a tool to do that. The whole operation will take less time than it took for me to type this response.
Regards

Upon removing the shifter housing and lock cylinder as Jim indicates, take the lock and key cylinder to a locksmith that can either re-key to the present tumblers, or
re-tumble the lock for a new key fit.
Top

Let us know how it gets solved. I like the Kardex idea best, if you have the time and its still original. Also curious if your locksmith can succeed in picking it. Its a pesky little lock. Also I am realizing now that the Vice-Grip idea I gave will still leave the lock plate trapped by the shift rod, which passes through it. Basically your only choice is unlocking it somehow, or drilling.
Top

Faithful:
I think Ron Domkowski is correct. All the pictures posted so far show the cylinder in the unlocked position. With the lock pushed down and the key turned a brass slug emerges from the cylinder. This prevents the lock from retracting and engages the tangs in the lock base to the locking collar on the shift rod. This slug is below the bracket that is bolted to the tunnel and will prevent the shifter base from being removed from the car. However I have never actually tried this, so I could be wrong.... 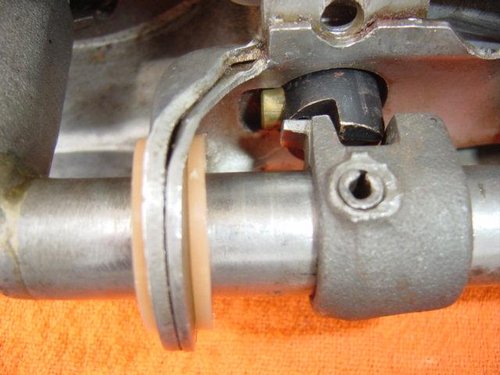 In this picture you can see the brass slug below the bracket that holds the shift rod bushing. It is that bracket that will still be bolted to the tunnel and cause the problems.

Tony can make a key IF you have the key number -- which is on the Kardex. PCNA makes the Certificate of Authenticity from the Kardex. What you need is an in to PCNA. I was able to do this about 15 years ago when I had lost my key. It occurs to me that going to a dealer with proof of ownership should suffice. Dealers provide this service for owners of recent cars -- of course they charge a fortune to cut and program a key.
bill
Top

Martin Benade wrote:yes. When you turn the key the peg or pegs that come out of the lock cylinder are below that locking plate (which in the picture has no bolts holding it down). That is exactly what it locks against. If you played with a shifter off the car and tried locking it, it doesn't really work. I assembled mine about a month ago, so this is all fresh in my mind.

Martin is absolutely correct! I have removed 100s of those shifter assemblies but never one that was locked. The pin does lock under the lock plate. There is no way to remove the shifter when the lock is engaged. I would think the best way to get is off is to drill out the tumblers and just replace the lock with one with a key. A locksmith is going to charge a fortune to come out and not be successful anyway. The lock is made from brass and should be easy to drill out. I will provide a replacement lock at a nominal fee. One is never too old to learn! 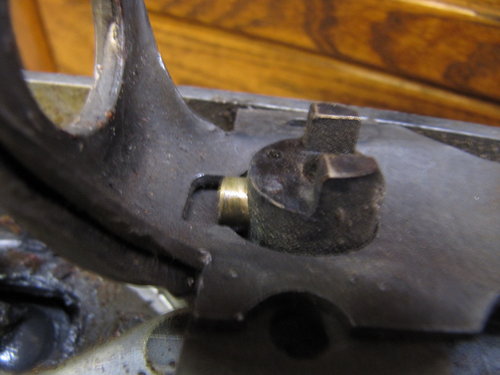 while we are on this subject, why is it so difficult to engage the lock some times and other times it just slips in. what type of adjustment do I need? stay well Tom
Top

Ron: dumb question on my part but, is the special bracket for the shift lock connected to the shift rod? If it's missing, then the shift lock doesn't engage anything to lock the shifter.

Guys,
If you were to refer to the B/C 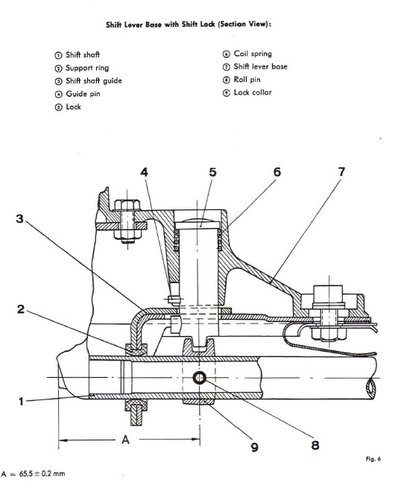 shop manual pg. TRA-7 you will see a cross section of the shifter lock. There you may notice that if the lock is in the locked position, as shown in the drawing, the locking pin will prevent the shifter or the lock from being removed easily. It may be possible to remove the shifter rod along with the shifter assembly but I suspect that also may prove to be a real PITA. A lock smith may be your best bet to unlock the lock cylinder.
Larry Coreth
Roanoake Rapids, NC
Top

Ron stated that his 62 T6 lock does not engage the shifter rod for some reason so he gave up trying to fix it.

I had the same problem and what I discovered was that on the bottom of the black housing the brass lock had for some reason been unaligned. It wore the edge on the shifter, thus there was nothing to grab on to. The brass lock should engage the lock into the base of the locking collar on the shift housing.

I bought a used shift housing from EASY and put it all back and now my lock engages.

here is a picture of the old worn locking collar shift housing. 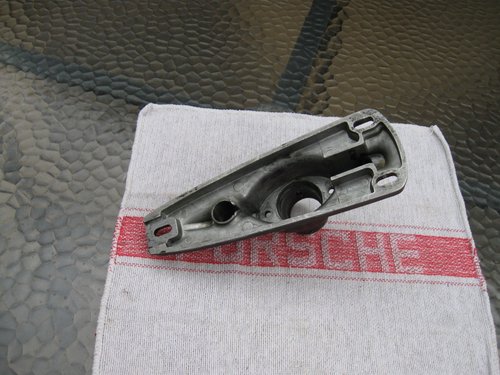