This is a '65 356C. The shifter is locked and the key is long gone. We gathered as many 356 keys as we could find and tried them all with no luck. Is the next step drilling out the lock? Is there another way to remove the shifter to have it repaired? Car belongs to a friend who sure would like to have it running by his birthday which is soon.....Thanks for your help.
Top

Call a locksmith, seriously. I have bought many a Porsche with no key, had a locksmith meet me on site and make a key. In this case he might not be able to make a key, that shifter is a little weird, but a good locksmith can probably pick it and release the lock at least.
I always need stories for my Barn Find column in the magazine, if you have a good story to share, please let me know.
Top

From my experience that lock is extremely hard to pick. When Tony Eugeneo gets one with no key, he cuts it open from the back side to deal with it, as the cylinder locks open or closed, and cannot be disassembled without unlocking it. I suppose you have discovered already that when it is locked in a car, it is also locked such that the shifter cannot be removed. I agree to first try a locksmith, but you will probably end up using a large drill to gut it. Good luck.
Top

Just unbolt the shifter from the floor. You can then remove the shift lock from the shift base by removing the small set screw. I have never had to use a tool to do that. The whole operation will take less time than it took for me to type this response.

If you have the Kardex the shift lock key code will be shown (I believe it starts with an FE - but may be wrong). From the code you should be able to have a duplicate key made.
Good luck...
Top

Jim Breazeale wrote:Just unbolt the shifter from the floor. You can then remove the shift lock from the shift base by removing the small set screw. I have never had to use a tool to do that. The whole operation will take less time than it took for me to type this response.

Some anti-theft device then. While useful, this information is kind of depressing.
Top

Jim Breazeale wrote:Just unbolt the shifter from the floor. You can then remove the shift lock from the shift base by removing the small set screw. I have never had to use a tool to do that. The whole operation will take less time than it took for me to type this response.

Some anti-theft device then. While useful, this information is kind of depressing.

But not all thieves can read, or are necessarily reading the info. on this list. (although I admit with Google and other "bots" constantly mining the web, chances are better than they used to be).
Dave Wildrick
Houston, TX
#10230
64C coupe
65C coupe
Top

Jim is dead on as usual. The three allen screws on the shifter and you will see it come right out. Thieves are still in trouble since this is so old school, most won't know what to do even if they do get it out. It is a tiny set screw so be really careful not to drop it. You then take the cylinder to a lock smith after you get a new key blank on ebay and get it rekeyed. 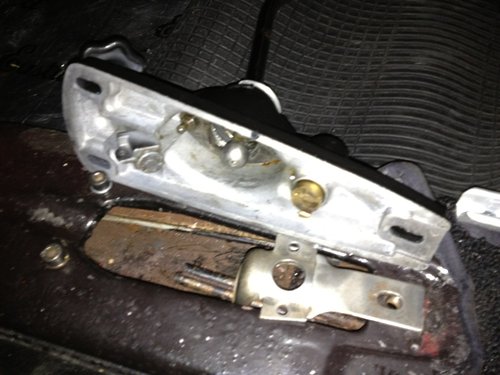 To Tony Shaneen:
Maybe the Kardex has it but the more available COA doesn't always. I have, one a "Certificate" (from 1992, Reno) and a newer "Certificate of Authenticity" sent to me unsolicited from Atlanta. Neither has the key code on it for my 1965. Tom
KTF, member #15
Top

Only a thief knowledeable about 356s would know about the shifter lock. The average car thief does not expect a transmission to be locked in reverse or neutral and is not going to spend a lot of time figuring out how to undo the mechanism. Likewise, the fuel cock also is a very effective anti-theft device. Few modern drivers would think to look for an on/off fuel valve. I even know long time 356 owners who never knew it was there! Always a great idea to shut off the fuel supply when parking the car...a thief won't get far if he manages to start the car.
Top

A lot of supposed anti-theft devices don't really work well. With a little ingenuity, you can develop your own that work better. Putting the distributor rotor in your pocket is a fairly good one. Understand, though, that if a thief really wants your car, nothing will stop him. (I won't mention the manufacturer, but one of the early sports cars had only two fuses. Lifting the hood and connecting the two fuses together was the equivalent of turning the ignition key on. Not many people knew about that, though.)

Cheers,
Wes
Some days it just isn’t worth the hassle of chewing through the restraints......
Top

Attached are pictures of the lock and key. I saved if from someones previous posting on this site.

I have a lock & key on my 62 T6 but the lock does not engage the shifter rod for some reason. I have tried to get it to work but gave up. Tony rebuilt the lock previously. 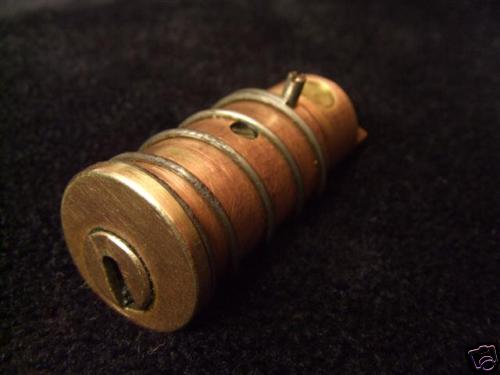 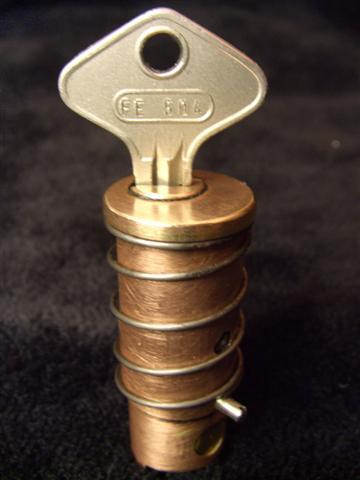 Frederick's picture shows the piece which sits under the shifter with a hole which the lock pokes through. That plate is held down first to the tunnel with two small allen bolts which clamp it in place. This is what prevents shifter removal, but only if the lock is locked. If you are lucky its not bolted down, or maybe you can unbolt the shifter, raise it 1/4 inch (6mm?) and use small needle-nose Vice-Grips to remove the bolts. They go into two special nut/clamp things which might let it come off if the bolts are really loose, or you might need to remove the bolts completely and let the nuts fall down. it They were actually pretty smart- it would be pretty hard to do while keeping your head down in a parking lot!
Top

Martin Benade wrote:Frederick's picture shows the piece which sits under the shifter with a hole which the lock pokes through. [...] This is what prevents shifter removal, but only if the lock is locked.

Are you sure? I see nothing that would do so.
Ron LaDow
www.precisionmatters.biz
Top
Post Reply
56 posts