I guess that the wind deflector is related to the electric sunroof in the hardtop. The tonneau has nothing to do with deflecting wind.

I have restored at least 12 pedal sets that had the clutch pedal longer than the brake pedal. I believe the longer came about with the T6 changes. I doubt that these pedal sets were Carrera.
Tom Keating
1964 356C Sunroof
Top

C J Murray wrote: ↑
Fri May 21, 2010 6:20 am
Using logic, not knowledge, because no clock is listed on the CoA, the ammeter was where the clock is and the other two holes were added later, OR it had no extra guages and the switch was the only Bosch option feature. So, how does the quality of the center hole compare to the other two guage holes?

That makes a lot of sense.
Top

Edwin Ek wrote: ↑
Mon Jul 15, 2019 5:18 pm
I guess that the wind deflector is related to the electric sunroof in the hardtop. The tonneau has nothing to do with deflecting wind.

I think the Speedster side spears would be listed as an option if installed by the factory. They were not stock.

Thanks Edwin ... That makes sense and yes the side spears are def not factory - looks to be 80s Ford Cortina or the like. Now to find a motor for the sunroof as it is missing ... Inside the zipper at the front of the hardtop is a wire/screw drive and a bracket w two rubber mounts but no motor.
Currently working on two nut+bolt resto's in Cape Town
'56 A RHD 5606 Silver Met) over Green - delivered Nairobi (Cooper Motor Corp)
'64 C RHD 6406 (Irisgrun) w Fawn (rehbraun) - delivered Johannesburg (Lindsay Saker)
Top

I'm assuming your car is a 6V. I've seen 12V sunroof motors from time to time and there is one on eBay. Perhaps a 12V motor can either be rewired or a resistor added as done on windshield wiper motors when cars are converted to 12V.

I would be wary of using a resistor to drop 12V to 6V. A 6V device needs twice the current of a 12V device to produce the same power; hence the completely different windings. So the drop-down resistor would need to be a very high power resistor, and it would likely get pretty hot. I would really want to test this extensively before installing if you were to attempt it.
Contact for Kardex
Top

Going back to the discussion of an anti-theft switch, how is this implemented? Simply a switch to short out the ignition circuit? I have instances of this option on a few Kardex. This would help improve my translations file.

Secondly, going back to the original discussion of a Bosch device, I only have a few instances of Bosch mentioned. Bosch headlights are one easy to understand option. The other is "Bosch Aggregate" mentioned twice in the 1958-59 time frame. This translates to Bosch units, but what units exactly is my question.
Contact for Kardex
Top

Good point, David. The sunroof switch isn't on all the time but rather only used when opening or closing the panel. However, it probably is quite a load.

David no doubt already has this but the option for an anti-theft switch on the Kardex is: Diebstahlsicherung unter Armaturenbrett (per Charlie White's site). My guess is that it interupts the coil wire. Sound right?

Picture of the mentioned "anti theft" switch. Have seen it on a couple of cars over a 20 year time span so a pretty rare accessory 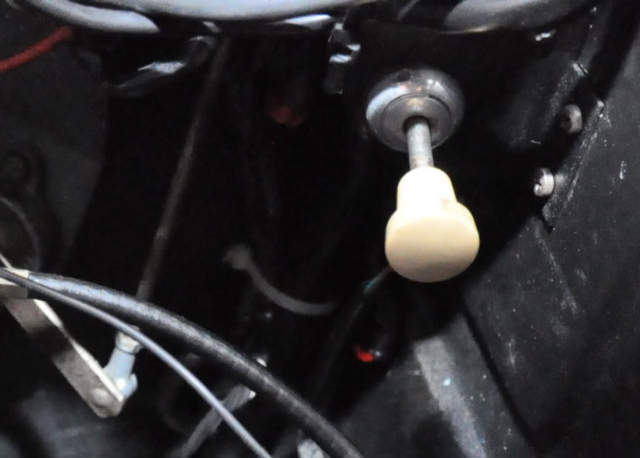 Here is something a bit unique, a plate to hold the clock: Loch für elektrische Uhr
This is the cryptic anti-theft option on the same Kardex (1958 06): Diebstahlsicherung i.F.e.Kurzschl.zg.schalter u.Arm.brett
I have expanded it to this so far: Diebstahlsicherung i.F.e. Kurzschluss Zündung schalter unter Armaturenbrett
Google translation: Anti-theft device i.F.e. Short circuit ignition switch under dashboard
Pretty tough to expand many abbreviations when they are so short.
Contact for Kardex
Top

Thanks for that info, David. A very unique option.

Edwin, you are correct; my mistake when typing. I thought it very unusual for them to specify that the hole was an option in addition to the clock. I have many examples of electric clocks installed. Perhaps on this Kardex, or on the original material that was copied onto the Kardex, the writer went into greater detail than usual. Certainly, there are many examples of options written in multiple versions/descriptions. There are over 50 printings of the Kardex itself.
Contact for Kardex
Top

bob maxwell wrote: ↑
Fri May 21, 2010 8:29 pm
Thanks to everyone who has offered ideas.
I crawled under the dash this afternoon, and found the following:

1) no secret security switch, but a moderate amt. of after-market wiring, including a toggle switch that probably goes to 2 lights up under the dash, one on each side (there's also a similar light in the engine compartment, and there is an extra brown wire that goes into the tunnel, I presume to that light). Of course the security switch could have been removed....???

2) the center clock hole was made differently than the other 2 small holes; its edge appears perfectly round and smooth, while the 2 smaller holes to either side are made with a series of small straight cuts. The ammeter appears to be wired in a non-stock fashion and is dated early 1960's, as is the clock (I already suspected this clock was not stock as it has a second hand, which I think appeared during the 356B era).

Soooooo, I now probably know what the Carrera pedal is, but the jury's still out on the Bosch power train mgmt. thing. Charlie White's thought about a devious translation looms large in my mind. Guess I'd need access to the original cardex in German, plus an appropriate translator. Any other thoughts?

Thanks again to everyone, Bob

The "Bosch Power Train Management" thing is probably a poor, literal translation of an option that may have been added later by the factory. I have the same set of gauges that were removed from a 59 A Coupe with Rudge Wheels way back in the 80s. The gauges are date stamped sometime in the 60s(I can't make out the date stamps) and the sending unit for the oil pressure gauge is dated 6.63. An ammeter and oil pressure gauge could be considered a "power train management system. " Oddly though, The gauges and sending unit are not Bosch but VDO. You gotta love COAs! 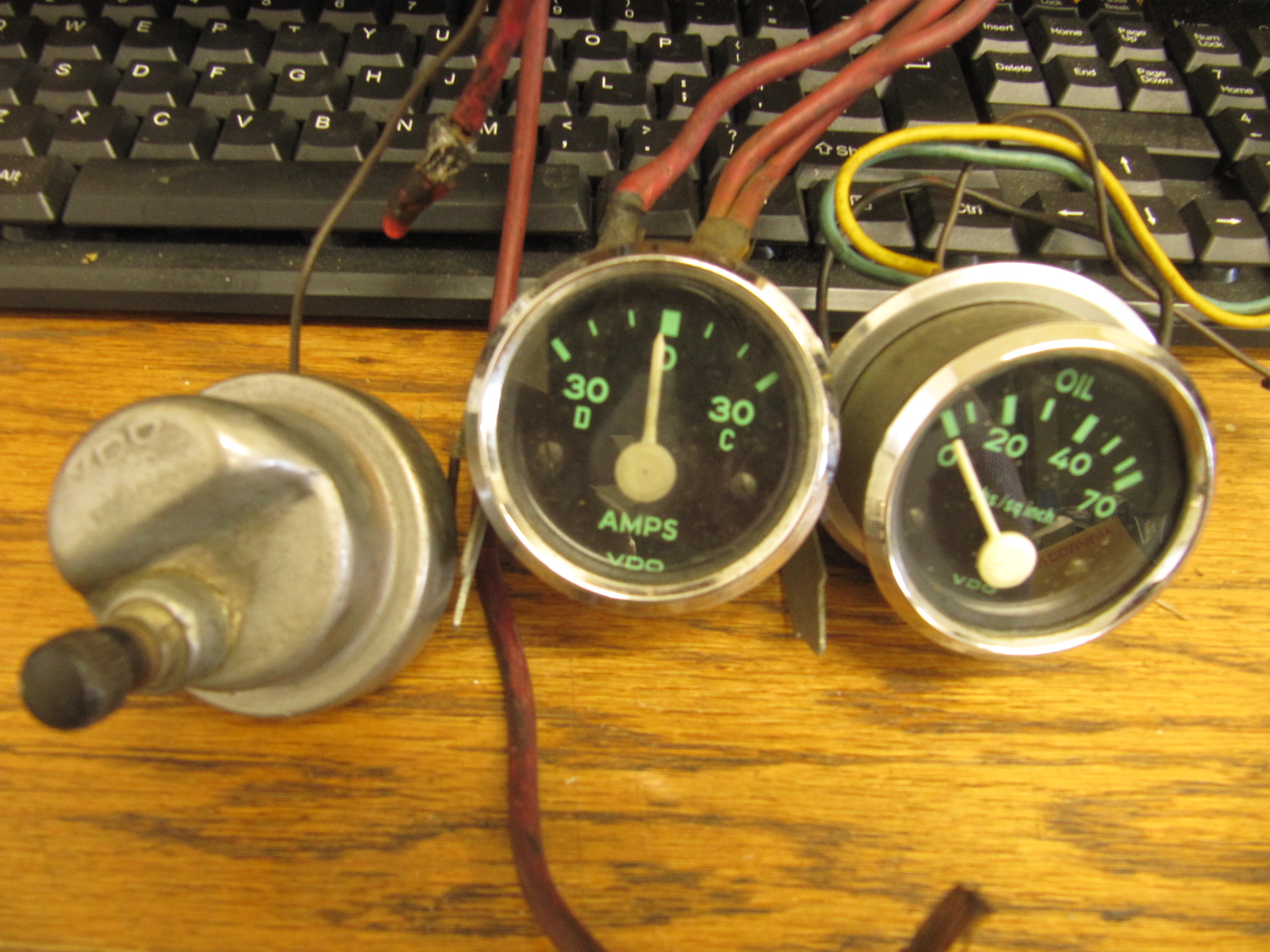