A vendor in Calif. sells wiper motor armatures to convert the 6V motor to 12V. He claims that this converts the motor to 12V without changing the field coils. Here is the question for the Electrical Engineers among you. Since the motor is more than likely shunt wound, what happens to the field EMF and flux with only the armature being wound for 12V? The 12V wiper motors that the vendor also sells for a '64 VW Bus look very much like the one in my '64 C and I wonder if using a bus motor wouldn't be a better way to go, if possible. I converted my '64 C to 12V back in the 70's and used a 12V to 6V converter at that time (not a dropping res.). During the current restoration the converter seems to have left home, so I'm left with having to do something about the wiper motor. Any suggestions would be welcome. (no dropping resistor allowed)
Top

I think, that armature does not work for the 64-65 C. It only works for the earlier wiper motors.
Please let me know if I am wrong , I am interested in doing this conversion and have not found a 12V wiper motor or armature conversion for a 65C.
Top

You might want to contact Eurtron Electric. They rewire and repair electric motors. They did the one on my fresh air blower.

Hugo Karasawa wrote: ↑
Fri Jan 10, 2020 2:45 pm
I think, that armature does not work for the 64-65 C. It only works for the earlier wiper motors.
Please let me know if I am wrong , I am interested in doing this conversion and have not found a 12V wiper motor or armature conversion for a 65C.

Thanks for your reply Hugo.
I was not aware that there was a difference in wiper motors between C's and earlier models. I'll try to look into this, even if I have to buy one of the armatures. They said I can return it if I havn't installed it (restocking charge and return postage). Where did you get your information? Jürgen
Top

Mike Wilson wrote: ↑
Fri Jan 10, 2020 2:58 pm
You might want to contact Eurtron Electric. They rewire and repair electric motors. They did the one on my fresh air blower.

Mike, I contacted Eurtron and expect a reply soon. I'll post their reply. They seem expensive, but it might be worth it not to have to use the converter and it's wiring. I wonder what Porsche used for their 12V cars. Jürgen
Top

Jurgen,
I have found Don West in McMinnville,Oregon to be very helpful in all things related to VW or Porsche wiper motors and parts. He did a wonderful job on the motor for my 1961 B with 6V. He's updated his advertisement at The Samba and lists the best contact as email: westcoastwipers@gmail.com. He provided his address as 3730 NE Grandhaven Dr. McMinnville Oregon 97128; Cell#(503)434-3530 Home#(503)434-6486 He appears to no longer be restoring Porsche wipers but he's probably a great source for information and maybe some parts.
1961 B Coupe
Top

I contacted Don West at westcoastwipers@gmail.com

This is his answer
"I have come up with a 12 volt 2 speed wiper motor that replaces the big round Bosch motors on the green frame T6 and C cars
I have seen others like EIS made a 12 volt motor to go on the green frame type but it covers the lower right mounting hole
Mine allows access to all 3 bolts.
It weighs half of what the Bosch motor weighed you can use the original switch but will not have variable speed use. It can also use a 66-67 bus 2 speed wiper switch with it and get 2 speeds then.
Here are some photos of one I did, it fit perfectly " 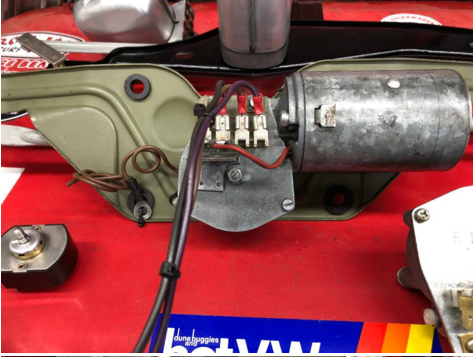 Good question, Jacques. I just looked at some on eBay and with some modification of the attachment points, a 911/912 motor just might work. The unknown is how they park the wipers.

Hello Jurgen,
Did you find a solution to the 6V to 12V wiper motor conversion ?

I found that 356devotion sells a 12V wiper motor that looks similar to the 356C wiper motor, I have not asked them if it is a turnkey installation or if it is needed to do any modifications . It looks that it is a two speed motor like the one that Don West used. 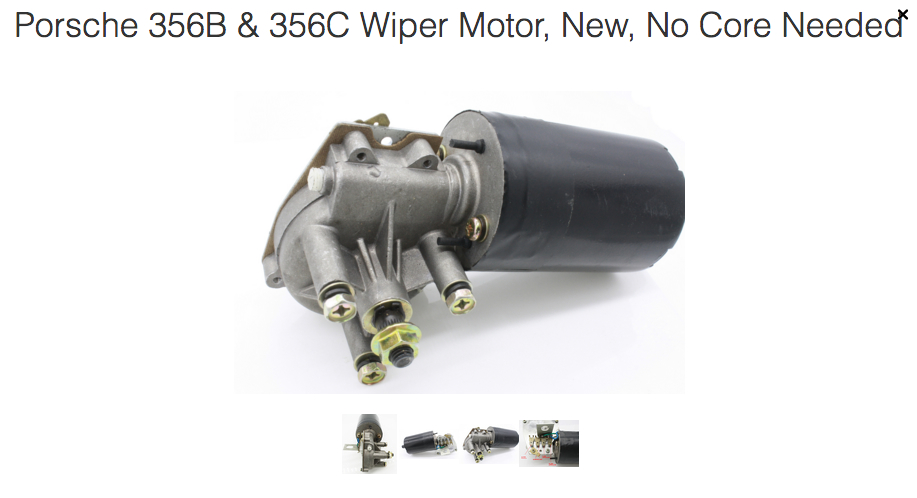 Hugo,
I have not found a satisfactory solution, but the 356 Devotion motor looks promising. I'll look into it, thanks for the information. Since my original post, most other solutions seemed fairly involved, so I was procrastinating since I have lots of other work do do yet, and decided that since the wipers worked perfectly before the restoration, I'd keep my voltage dropping device for the time being. When I converted to 12V back in the late 70's, I designed a transistorized 12V to 6V circuit using a Zener and power transistors that kept a constant 6.7V at the output regardless of the current draw (it was over-designed) and worked well at both speeds. When my brother recently converted his B T6 to 12V I used the same circuit for his car. BTW, I used simple Zener reductions for all the low current instruments, all worked well for a couple hundred K miles util I retired the car in the late 80's. It is being restored right now. Jürgen
Top
Post Reply
13 posts • Page 1 of 1